With most locals off to the beach or the countryside and basically no foreign tourists, Paris is yours and yours alone this summer. The perfect occasion to visit the city’s famous monuments and explore its extraordinary museums!

Below is our pick of our three favorite not-to be missed temporary exhibitions of the moment.

Pompeii at the Grand Palais

It was already one of the most eagerly awaited exhibitions of the year but after having been postponed this Spring due to the Covid-19 outbreak, the Pompeii exhibition that opened its doors earlier this month is now THE event all art lovers and history buffs are lining up to attend. Held at the Grand Palais, “POMPÉI, Promenade immersive. Trésors archéologiques. Nouvelles découvertes” (Pompeii. Immersive exhibition. Archaeological treasures. New Discoveries) plunges the visitor into the bustling streets of Pompeii on the day Vesuvius erupted, thanks to an immersive 3D device.

James Tissot at the Musée d’Orsay

Originally scheduled to open on the 24th of March, the “James Tissot, l’ambigu moderne” (James Tissot, Ambigously Modern) exhibition is the first retrospective since 1985 of this somewhat forgotten impressionist. Born Jacques Joseph Tissot in Nantes, the painter was a major artist of the second half of the 19th century whose career spanned the English channel, garnering commercial and critical success both in London and Paris for his highly coloured portrayals of society figures. As such, the exhibition includes many key modern-life works from his time in the two capitals, such as The Ball on Shipboard (1874), London Visitors (ca. 1874), and images of Parisian women of different social classes engaged in various occupations from his great series of paintings, Women of Paris (1883–1885). 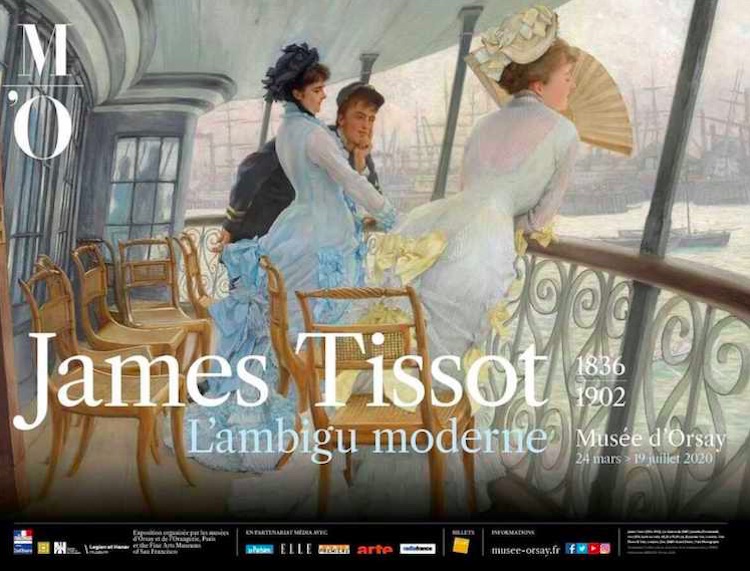 Consistently defying traditional conventions, both professionally and personally, the artist cultivated a dandy image and developed a real passion for Japanese art. But while he loved to depict social events and balls with humour and great attention to detail, he is also famous for nurturing a deep commitment to religion after the tragic premature death of his lover and muse, Kathleen Newton, with the Prodigal Son series and hundreds of illustrations of the Bible.

James Tissot, Ambigously modern at the Musée d’Orsay runs until the 13th of September, 2020.

Cézanne and the Italian Masters at the Musée Marmottan Monet

This exhibition organized by the Musée Marmottan Monet was supposed to end in early July but due to the coronavirus, it has been extended until the first days of 2021, which should leave enough time for all Cézanne aficionados to explore the strong connection between the great artist from Aix-en-Provence and the works of the greatest masters of Italian painting. It is indeed the first time that some sixty of his masterpieces, including the iconic Montagne Sainte-Victoire, are being displayed alongside artworks by Tintoretto, El Greco, Ribera, Giordano or Poussin.

Divided into two distinct parts, “Cézanne et les Maîtres. Rêve d’Italie” (Cézanne and the Master Painters: a Dream of Italy), illustrates that if the French artist was clearly under the spell of the Italian style from the 16th to the 19th century without actually copying it to create a new kind of painting, this fascination worked both ways, with many members of the Novecento movement, such as Carrà, Morandi and Boccioni revisiting his themes in the 20th century. Quite a feat for a painter who actually never visited Italy during his lifetime!

Cezanne and the master painters, a dream of Italy at the Musée Marmottan Monet runs until the 3rd of January, 2021.

Lead image by Rob Potvin on Unsplash; all other images courtesy the relevant museums