Everyone who lives in or has ever been to Nice knows the man with his red piano who plays all over town. Few know Steve Villa-Massone’s story though.

The chronicler of this story was at a tiny pub on a small Canadian island last year when the casual conversation with her neighbor turned to where she was from. When she replied that she lived in the Nice area, the face of the person across from her lit up. “Nice… I’ve been to Nice! That’s where that guy plays the red piano in the main square!”

“That guy”, who has become a reference for visitors to Nice from every nook and cranny of the world, has a name: Steve Villa-Massone. And the 39 year old Nice native also has quite an interesting background beyond being the man with the red piano who plays in the squares and streets of the Azurean capital. 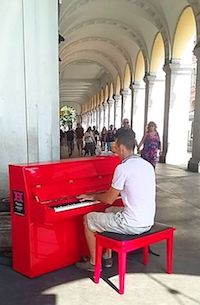 Ever since he was a boy, growing up with three siblings in a respectable middle-class, art-loving home, Steve had wanted to be a pianist and a composer, and studying at the conservatory. But while his parents had been happy to foster his love for music through piano lessons, they dissuaded him from taking it up professionally, fearing poor career prospects. At age 19, Steve reluctantly embarked in the “real” work world, taking a job at a restaurant in Cours Saleya in Nice.

And then, as so often in life, divine intervention, fate, or whatever you wish to call it, struck.

Pierre, an itinerant musician, set up his piano right outside that restaurant. Steve watched in awe how people were gathering around him, listening to him play and even throwing some coins in his hat. And he had an epiphany: that was what he wanted to do – combining music and freedom. So, during his lunch break he went over to Pierre and asked if he could play a few notes… and that experience was all the motivation he needed to quit his dishwasher job and become a “professional” street pianist.

“Everyone tried to convince me that playing in the street is a mere step up from being a clochard. But to me it was clear there and then that it had real value. Sharing music brings joy to people,” Steve tells us. He followed his heart and never looked back. 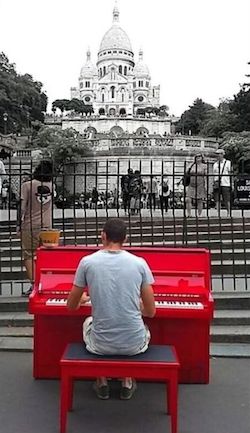 Armed with Pierre’s insider tips how to get started, Steve is ready to go. First he plays around Nice, then travels to other French cities, and then across Europe, his trusted piano on board his van. And once he plays in Italy, Switzerland, Germany, and other countries, he discovers a different culture of music. Elsewhere, people are more welcoming, more open to this form of entertainment, than back home in France where it is not even formally allowed to play music in the street, and where street musicians are often regarded as social misfits. Things go well. Steve is never rich but he gets by, and that’s all he wants.

And many a wondrous turn of events would happen over the years. One of them is an invitation to play at a festival, and Steve is pleasantly shocked when he sees his own name right underneath one of that of Valentina Lisitsa, a superb Ukrainian-American pianist whose fan he had been for many years, and with whom he would later cross paths on several other occasions.

One stopover in Geneva would prove a particularly memorable experience: someone hears him in the street and asks him to come play at a hotel ballroom. Thinking he is to perform at an event, Steve finds, to his great astonishment, that there are only two persons in the room – the man who had invited him, and a guest. Of course Steve does what he always does, pouring his entire heart and soul into the keys of his instrument. Well, it turns out that the gentleman’s “plus One” is the director of the International Music Academy of Flaine, France. And he offers Steve a scholarship – something the cash-strapped young man from Nice could only ever have dreamed about.

An exceptionally talented pianist, Steve has a versatile repertoire that ranges from jazz to contemporary but he specializes in classical music. His idol is none other than Georges Cziffra, one of the greatest maestri of the 20th century and notable humanitarian. But even for all his love for playing, Steve is even more passionate about creating and composing. To date he has written over 100 compositions and partitions. He realizes though that a composer rarely ever enjoys public attention, and that the pianist is the first messenger of the composer’s expression. Luckily for him, he can be both.

Today, twenty years after that fateful day on Cours Saleya, he is still happy with his choice. “Money is of course always tight, and the way society views you is a bit different, but I do what I love doing, the public enjoys listening to me, and that’s all that counts.” Seeing that their son wasn’t faring too badly, Steve’s parents eventually came to terms with his unconventional career choice. Even if they vacillated between being proud of him and worrying about his continued material welfare they pledged their support no matter what. Sadly Steve’s mother passed away four years ago but his dad – an artistic spirit himself – remains his biggest cheerleader. He understands Steve’s belief that “music is democratic and needs to be shared with the public rather than be confined to the four walls of a concert hall”.

These past few years, Steve has played mostly in his hometown. He and his famous red piano (only occasionally replaced by a black one when the red one is in the shop for an overhaul) are often found on place Masséna, at NicEtoile, or by the Libération market, invariably surrounded by a large crowd of listeners. His favorite location is the Promenade des Anglais but he rarely ventures there, since the famous boardwalk is off limits to musicians. Most Niçois cops will look the other way when they come across him but open air music is generally still a contentious point between artists and the city government. Wherever he plays, it happens time and again that a fellow musician spontaneously jumps in for a four-hand jam. 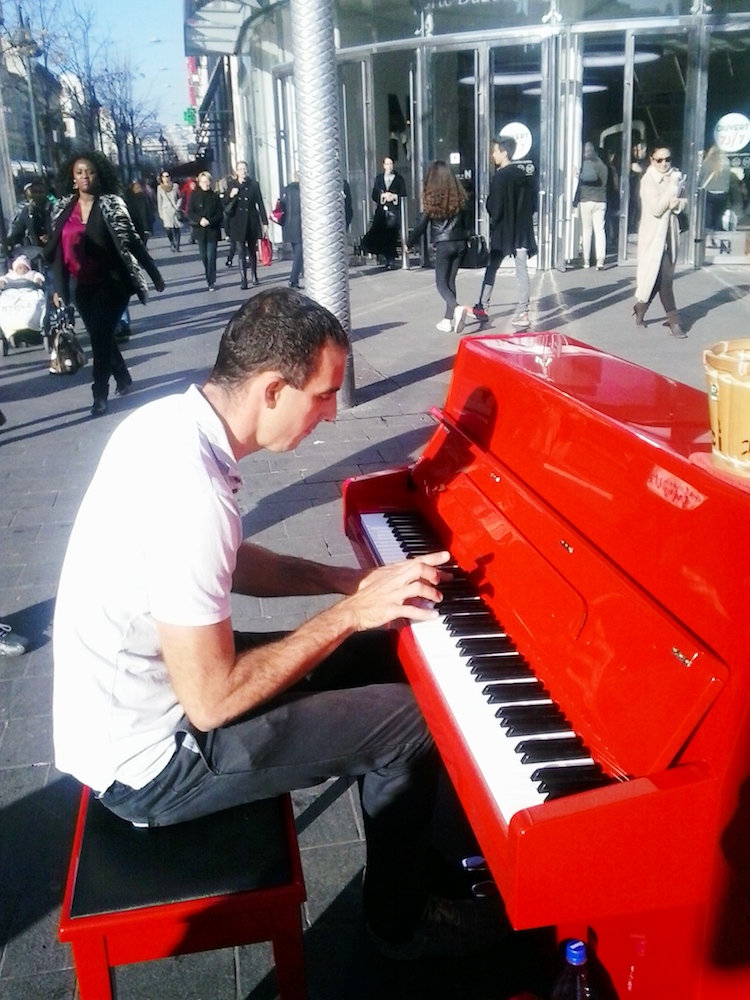 He is also a sought-after pianist for private events or municipal festivals like C’est pas Classique. And when the opportunity calls, he generously donates his time for a good cause like the 2017 Nice-Berlin Solidar(t)ité concert benefitting the victims of the Berlin Christmas market terrorist attack.

If you wonder about the logistics of moving an instrument the size of a piano around… Steve wheels it around on an adapted cart, setting it up all alone with nothing but muscle power and a few well-orchestrated moves.

Not long ago though, some crook decided it was a good idea to steal Steve’s cart. And it’s not exactly an item you can easily find at your nearest hardware store. Luckily, his sponsor Niss’Art Pianos offered to get him a custom-made replacement all the way from Germany. But with Europe currently locked down due to the coronavirus pandemic, the cart will not arrive anytime soon.

Steve uses this period of confinement to record and post daily video-taped concerts from home, often playing his own compositions on his grand piano and in the company of Schouki, his calico cat (check his Facebook page for daily announcements). But while he misses the encounters with people, locals and tourists alike, and can’t wait to go outside and play again, he also sees the positive in the current period of isolation: it gives him more time to teach, record a new album, and write his autobiography.

No doubt that in a city as rich in cultural treasures as Nice, Steve Villa-Massone is one of its most precious assets and most memorable landmarks, no less famous than the big tourist attractions. Just ask anyone at the other end of the planet who has ever been to Nice…

The current period of self-isolation hits street musicians like Steve Villa-Massone especially hard as he and his peers live off the coins that land in their hats, and the sales of their CDs. If you’ve ever heard Steve play in the streets of Nice and enjoyed his work, or if you follow his online concerts during this period, please consider making a donation to his PayPal account, buying a CD from his online store, or ordering a partition via email. Thank you!