L’Odyssée, a newly released biopic, dives into the life story of Jacques Cousteau, one of the world’s greatest ocean explorers.

The eyes of children aged 7 to 97 light up at the mention of Jacques Cousteau, the legendary French oceanographer and undersea explorer who filmed 120 documentaries about the secrets of the sea. Now the camera is trained on the venerable adventurer himself: L’Odyssée, a recently released biopic, retells the story of Cousteau’s amazing life and career.

Writer and director Jérôme Salle, one of the most notable French screen authors, assembled a world class cast including Lambert Wilson as Cousteau, Audrey Tautou as his wife Simone, and Pierre Niney as their son Philippe, to retrace the three decade period spanning the evolution from dreamer, naval officer, to tentative scientist and finally internationally acknowledged explorer, biologist, and ecologist. Based on a 2012 memoir by Jacques’ son, Jean-Michel, the story largely follows the actual timeline, with some artistic license. While Jacques’ contribution to the fascinating world of maritime science does get abundant and well-deserved accolade, the focus is on the complex relationship between him and his son Philippe.

Summer 1946. The Cousteau family – Jacques, his wife Simone, and their two children, Philippe and Jean-Michel – live in their beautiful house by the Mediterranean Sea. By day they dive, by night they watch the stars. It’s paradise on earth. But Jacques is never content. He lives and breathes adventure and believes absolutely in the virtues of progress. With his invention, the aqualung, his recently acquired vessel, Calypso, and a crew of free-spirited adventurers he is ready to cross the world’s oceans. Ten years later, back from the boarding school to which he was sent with Jean-Michel, Philippe finds his father greatly altered – an international celebrity with megalomaniac dreams of grafting gills to humans and creating underwater cities. Jacques cannot see it yet, but Philippe already understands that progress and pollution have begun to lay waste to the submarine world. Despite their mutual love and admiration, violent conflict between these two passionate men is inevitable. But on their greatest adventure together aboard Calypso, in Antarctica, they will find each other – before tragedy strikes.

Storyline apart, the highlight throughout the movie is the stunning terrestrial and underwater footage – partly consisting of reworked originals, partly created by cinematographer Matias Boucard. Shot in extremely photogenic locations around the world including Croatia, South Africa, and Antarctic Argentina, L’Odyssée is a feast for the eyes and the senses. Jacques Cousteau’s story is well-known and the plot holds few surprises, so the narrative tends to adapt to the imagery rather than the other way round. The liberal mix of French and American cinematographic techniques is not a unanimous success with French film critics. But those are technicalities that true biopic fans, and especially those of Cousteau, hardly notice and readily forgive. What does universally get glowing reviews though is the three principal actors’ artistic performance. 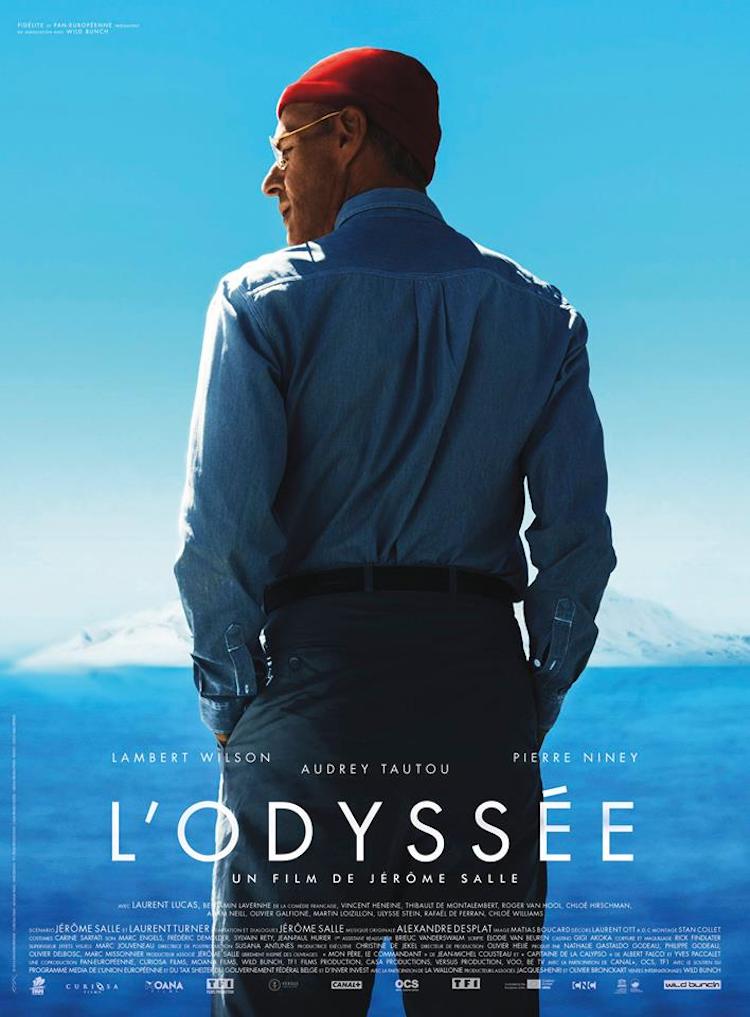 Pierre Niney, a rising star of French cinema and winner of the 2015 César and Cristal awards, plays the ill-fated Philippe, shares a peek behind the scenes. “Jérôme Salle wanted to make a truly authentic movie in which everything was as realistic as possible. So we had to learn to dive, in fact we had to dive as much as any possible. I myself insisted to dive with sharks even though I was terrified to the bones.”

There is hardly a venue better adapted to the pre-première of L’Odyssée than the Musée Océanographique in Monaco, the very one that Jacques Cousteau headed from 1957 until 1988 and directed his explorations from. For the screening on the eve of the national French rollout, Prince Albert II, the ruler of the Principality and no stranger to notable explorations himself, was joined by members of the original Cousteau team, family, and museum staff who had still worked with the famous explorer. Small wonder therefore that his spirit was palpable throughout the evening. The L’Odyssée screening served the dual purpose of not only featuring the movie but also kicking off a 2018 feature of 20th century pioneers, among them notable Monégasque royals.

Following its October 12 release in France (and in the French language), L’Odyssée is slated for international screening later this year, initially in the U.K.

“For most of history, man has had to fight nature to survive; in this century he is beginning to realize that, in order to survive, he must protect it.”