A terrible tragedy was at the origin of the most inspirational film festival in recent years – one that bridges more than just the Atlantic.

If there were an award for Most Remarkable Accomplishments (and there should be one!), our money is on a successful actress/director, who in addition to being exquisitely talented and beautiful, is also a noted humanitarian, fluent in six languages, and a graduate from several of the world’s top universities. She is equally at home in the U.S. and France, and is the founder of a high quality New York City based film festival that is on the fast track to international renown. Right – it’s Nora Armani. Who else?

If you know her, you are familiar with her great work on stage and screen. She is nothing if not versatile: best friends with Shakespeare, Shaw, Hammerstein, Molière, Chekhov, Guitry, Labiche, Fatima Gallaire, and Tewfik al Hakim on stage, she has also interpreted lead roles in American, French, Czech, Armenian, Lebanese and Egyptian films. In the unlikely case that you don’t know her, it’s because she is also a very humble, discreet, low-key person. She prefers to channel her notoriety in productive work for the greater good of society. And it just so happens that the professional environment she has made herself a name in over the past 30 years, is a great platform to give her social projects the visibility they deserve. 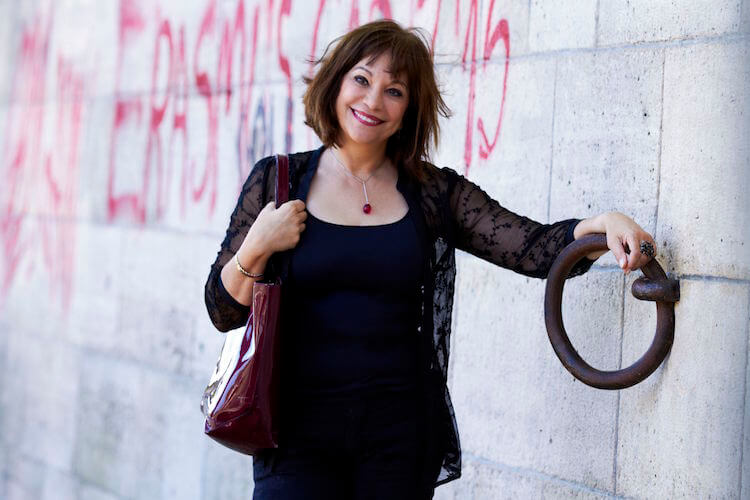 The Cairo-born daughter of Armenian parents, Nora heeded the call of the muse early on. Not one to do things half-hearted, she put her acting and directing career on solid feet by pursuing education and training in London and all around the world. Fluent in English, French, Armenian, Arabic, Italian and Turkish, her prestigious résumé includes advanced degrees from venerable academic institutions like the London School of Economics, the American University in Cairo, and UCLA, but also workshops such as Ariane Mnouchkine’s worldwide acclaimed Théâtre du Soleil (Paris) and Simon MacBurney’s Complicity Theatre (London).

Such hard work paid off quickly. Harold Pinter’s The Lover (Los Angeles), Beyond the Veil (Off-Broadway), The King and I (Cairo), Arms and the Man (Young Vic Theatre – London)… Nora’s name was found on top of the most prominent playbills the world over. Among her many works, the dual award-winning play Sojourn at Ararat / Le Chant D’Ararat, which she and her stage partner Gerald Papasian performed in over 25 cities on four continents in English and French.

She also wrote and performed her wildly popular one-woman-show On the Couch With Nora Armani, and she made a name for herself as a stage director. And Nora has a great passion for the camera, on either side of it. Her mile-long filmography is impressive, and includes viewers’ favorites like Santa Claus in Baghdad, or M. Dovlatian’s feature film Labyrinth which earned her a Best Actress Award. As a producer and filmmaker, she signed responsible for several films that were screened in major international festivals, including Cannes, Montreal, Rotterdam, and Cairo.

Life seemed to be on track for Nora. And then one day, tragedy struck.

On March 16, 2004 her cousin Vanya Exerjian and her uncle Jack Exerjian were brutally killed in Cairo in a religious hate crime. A terrible, terrible blow for Nora who was very close to both. She reeled from it but she refused to let bitterness and anger take over. “I prefer to evoke the sacred and dear memory of my kin. Their absence leaves an indelible crater in my heart, ready to erupt, that only the love of humanity, deep compassion, understanding and forgiveness can calm. I don’t want to fill the trough with hatred, I don’t want vengeance and cursing to fill it in. Instead, prayers of peace, of love and compassion for a better humanity, and understanding of our fellow human beings,” she states with great strength of heart and dignity.

She made a pledge to dedicate her artistic work and journey to the memory of her murdered cousin and uncle, and to honour their legacy by turning their violent deaths into something positive. As a prolific artist, she felt that “maybe art and creativity are the answer.” Vanya had been a gifted actress and film producer as well, so naturally Nora was drawn to the idea of a film festival around the theme of violence, or rather the fight against it. “Violent death has become so commonplace these days, even in the arts. Almost every film and every movie poster depicts guns and explosions and fights and horror,” she says.

Nora wanted to counter that ubiquitous violence… but soon realized that there are other burning issues that also need attention. So she broadened the scope of the festival she had in mind to encompass all kinds of social topics and to shed light on the human condition at large, and she proceeded to set up what was to become the SR Socially Relevant Film Festival New York.

The guiding philosophy was soon put in place. SR focuses on socially relevant human stories and raises awareness to social problems by offering positive solutions and messages. By raising awareness and expanding knowledge about diverse cultures and the human condition as a whole, it is possible to create a better world free of violence, hate and crime, she believes. The spotlight is therefore on filmmakers who tell compelling narratives or documentaries across a broad range of social issues without resorting to gratuitous violence and violent forms of movie-making. Films screened at SR Film Festival are enlightening, uplifting, and entertaining, but most of all artistically appealing. And finally, a portion of the proceeds from ticket sales each year of the festival will be donated to a charity selected from the fields of poverty, homelessness, cancer and aging.

“I had a choice of either doing it, even if it meant putting in everything I owned, or just talk about it for the rest of my life…. It was a huge step, but one that I really wanted to take, and I am so glad I did, with the help and support of so many wonderful partners, volunteers and interns,” she raves, citing Henry Ford who once famously said that coming together is a beginning, staying together is progress, and working together is success.

In 2014, the SR Film Festival’s inaugural edition took place in New York City, Nora’s home for a part of the year, and it really hit the spot. 55 films from 18 countries entered the competition in the first year alone, and a whole passel of partners as well as high-profile journalist Amy Goodman as keynote speaker were only too willing to come on board. An even bigger success the following year, with 53 films from 33 countries…. And the third edition in 2016 is already taking shape, with multiple-award-winning films from around the world entering the competition. 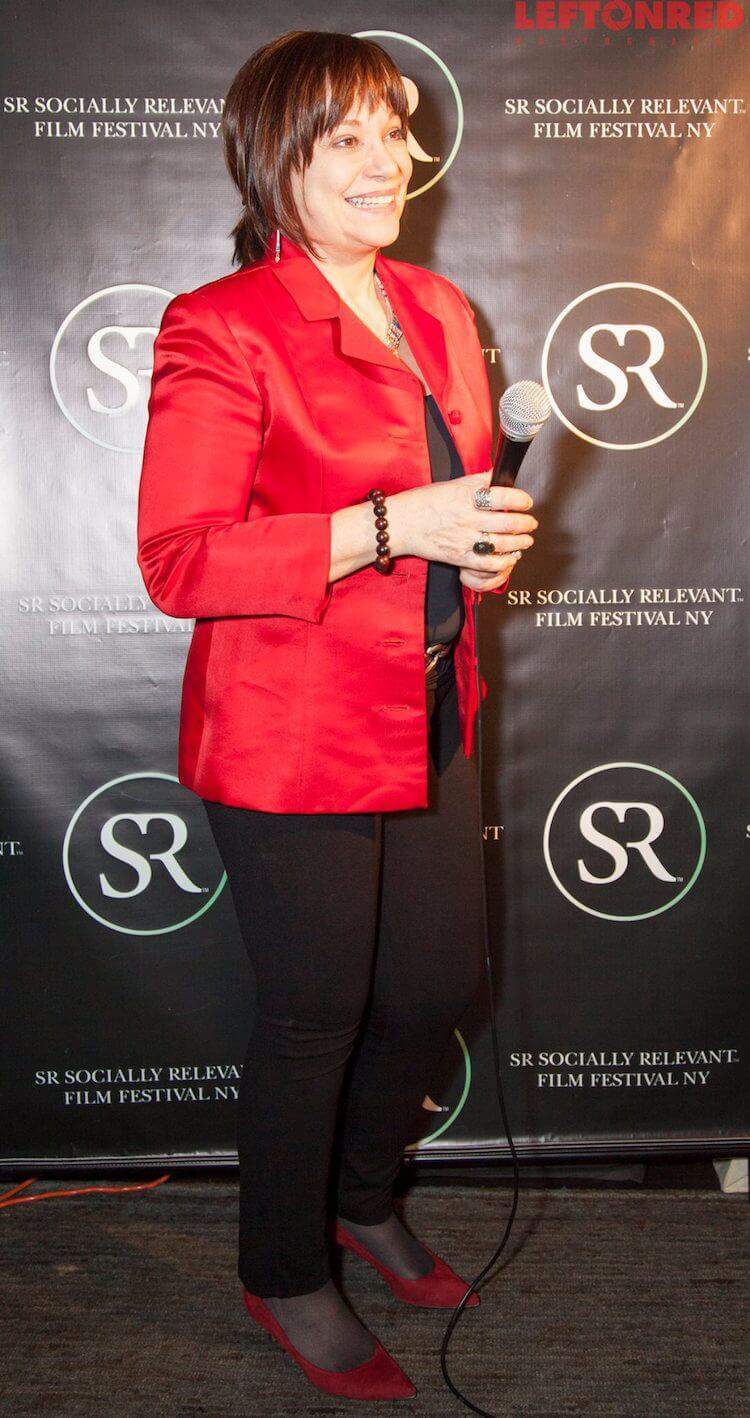 In fact, the festival enjoys so great a reputation by now that Nora managed to land a big coup, getting a top French-American actor on board as a jury member: none other than Marc Duret (Le Grand Bleu, Nikita, La Haine, Dobermann, Borgia, Outlander, L’Esigenza di unirmi ogni volta con te) who wholeheartedly supports the theme. In addition to the NYC main event, and in a nod to France, Nora’s second home, the festival also has a presence here, taking place in Europe’s Holy See of All Things Film, right alongside the Cannes Film Festival in May.

Young as it is, the festival is already firmly established and well-known around the world. “It wasn’t an easy journey. The first year is especially hard, no one knows what to expect. The second year, they take note, and the third year they realize you know what you’re doing,” Nora explains. The spirit of the Socially Relevant Film Festival is a truly inclusive one. “Diversity matters a great deal to me, and we encourage filmmakers from all around the world to participate… especially women and minorities.”

The festival features four categories: feature length narratives, short films, documentaries, and scriptwriting, for which submission is currently open. A number of prizes and distinctions await the winners, including the Empowering Women and Girls Award in memory of Nora’s late cousin Vanya Exerjian. (Information on deadlines and guidelines can be found on the festival’s website.) 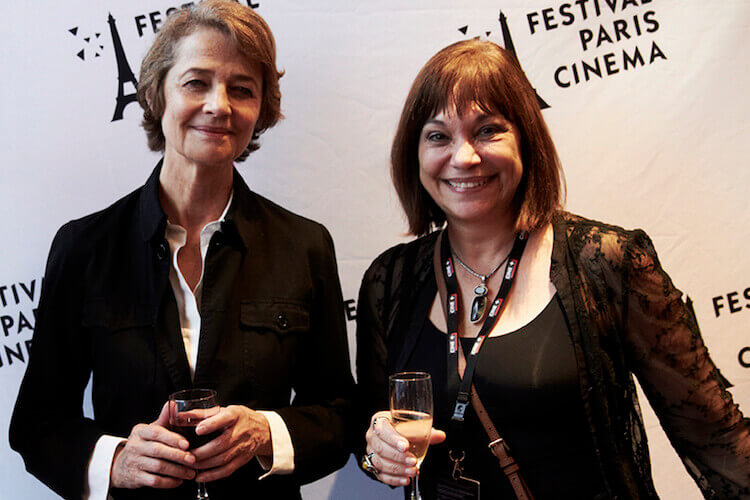 It takes amazing strength to turn a tragedy of such dimensions into something so positive and beneficial. Nora has that strength. “Don’t forget to count your blessings every day and share them with others less fortunate than yourself,” is the motto she lives by every day. Her work as an actress, writer and director has rightfully earned her many prestigious awards but we’re sure you agree with us that she deserves none more than the one for Most Remarkable Accomplishments.