Continuing our look at the history and intrigue of Nice’s most famous and glamorous hotel, as she celebrates her centenary.

From 1920 to 1957, the Hotel Negresco remained open under the ownership of the Marquet group. After 1945 and following the end of the Second World War, visitors started to return to the French Riviera, but instead of the aristocratic families and wealthy tycoons of the prewar years, during this period the Negresco’s clientele primarily consisted of short-stay tourists and businessman passing through Nice, and gradually the hotel started to decline.

In 1957 the Negresco was struggling to keep its doors open and the Marquet group decided to put it up for sale to try and recoup some of their losses. Shortly afterwards, Jeanne Augier, the daughter of a Breton butcher turned real estate developer Jean-Baptiste Mesnage, heard about the sale. Jeanne and her parents had moved to Nice from Brittany following her marriage to Niçois politician and businessman, Paul Augier, and after her father suffered a financial setback, 34 year old Jeanne took over the family business and started looking for property to invest in. 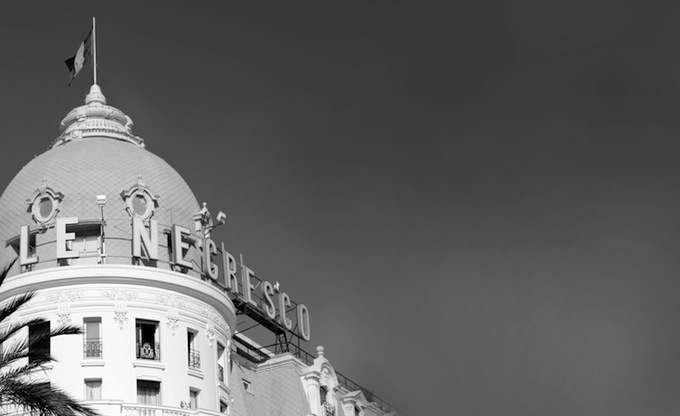 The faded Negresco building was just a few metres further down the Promenade des Anglais from the apartment where the Mesnage family were living at the time, and the hotel primarily interested Jeanne because it was the only building in Nice with a full sized lift. Jeanne’s mother had recently become paralyzed following a botched operation and the Negresco lift was wide enough to allow her mother to be taken outside while lying in her bed.

Jean-Baptiste Mesnage purchased the hotel in 1957, and for the next 8 years Jeanne, her husband and her father worked tirelessly to restore the Negresco to its former glory, whilst building a family apartment on the 6th floor of the hotel. Jeanne Augier was determined to create a home away from home for her guests, and she and her husband visited auction houses and galleries all over France purchasing over 3,000 works of art and antiques with which to furnish the Negresco.

The couple restored the glass dome in the Salon Royal which was reputedly designed by Gustave Eiffel and created 2 restaurants on the ground floor- Le Chantecler and La Rotonde, which was designed around an 18th century carousel complete with wooden horses. As the Negresco flourished once again, Jeanne Augier increased the number of employees from 76 to 260, and, from the 1960s onwards, the rich and famous began to flock to the Riviera once more to stay at the Negresco. 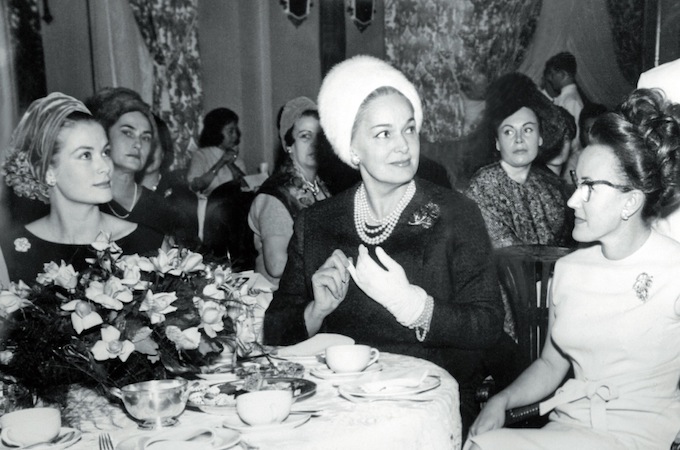 Guests of renown over the years have included Royalty- Queen Elizabeth II, the Duke and Duchess of Windsor, King Ibn Saoud and the Shah of Iran all stayed at the Negresco as did film stars such as Ava Gardner, Catherine Deneuve, James Dean, Marlene Dietrich, Jean Marais, Grace Kelly, and Gina Lollobrigida.

Legendary stories about the Negresco in the 1960s and 1970s include Richard Burton once leaving a jewelry case with a diamond necklace he had purchased for Elisabeth Taylor in the hotel bar, James Brown spending a night chasing his wife up and down the hotel corridors in a wild fit of jealousy, and the Red Army Choir holding a private concert in the hotel bar in honour of Jeanne’s husband Paul Augier.

Once the Negresco’s reputation started to grow again and Jeanne Augier’s love of art became widespread, artists and sculptors from all over the world came to the hotel to meet her and to enjoy her “museum-hotel”. Artists such as Pablo Picasso, Salvador Dali, Jean Cocteau and Marc Chagall became regular visitors to the hotel and some like Chagall became friends with Jeanne and would dine with her in the Chantecler restaurant on the ground floor.

During this period, Jeanne Augier became so well known in the world of luxury hotel design that 2 guests of the Negresco asked her to advise them with their own projects. The first guest was the Shah of Iran who invited Jeanne to design and furnish the hotel Shah Abbas in Ispahan in 1965, and the second was the Soviet leader Nikita Khruschev who invited her to sit on the Soviet tourist board Intourist, for two years as an advisor to the Russian tourism trade. To thank her for her work on the Shah Abbas hotel, the Shah of Iran gave her a platinum watch which she still wears to this day.

Now only 10 years younger than her beloved hotel, Jeanne Augier still lives in the family apartment on the 6th floor of the Negresco today with her two dogs Lili and Lilou, and photos of her with well- known figures such as Louis Armstrong, Clint Eastwood, Yves Montand and many others are displayed around the hotel bar. Le Chantecler restaurant now boasts 2 Michelin-stars, and the Negresco is still famous as one of the most luxurious and well-known hotels in the world whilst remaining faithful to Jeanne’s original plan to provide a home from home for her guests by surrounding them with art and beauty.

The Negresco was classified as a National Historic Monument in 1974 and as a National Historic Building in 2003 by the French Government. Following a €12 million renovation in 2010 to repaint the façade and to update and enlarge some of the suites, the Negresco is instantly recognizable on the Promenade des Anglais today and its pink dome and green turrets have been fully restored to the glory of the golden age of the Riviera. 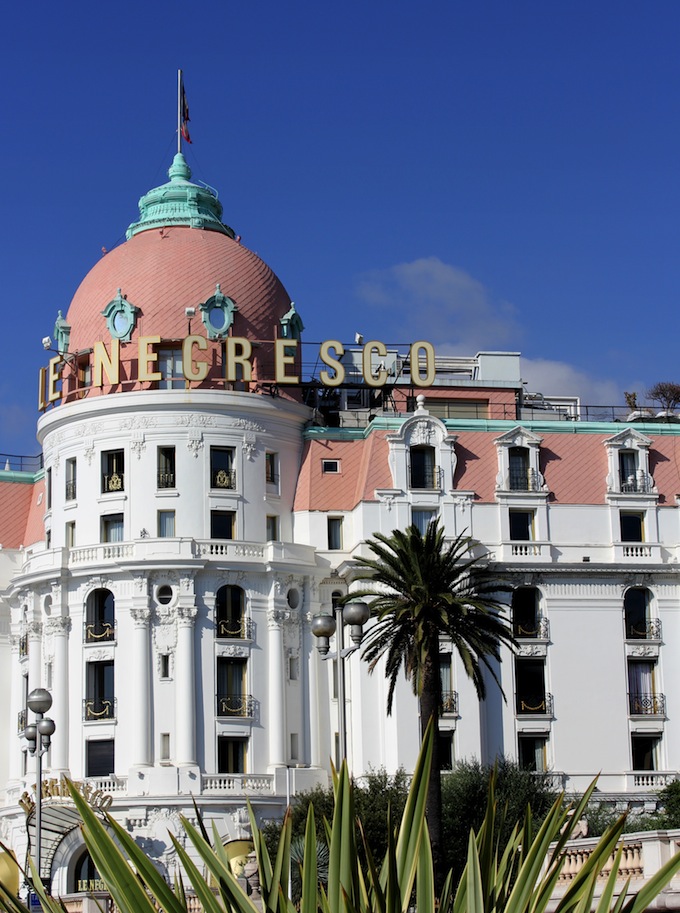 Since the death of her husband Paul Augier in 1995, Mme Augier has received several offers for her hotel, including allegedly an offer from Microsoft founder Bill Gates. (Negresco legend has it that Jeanne refused Gates’ offer by telling him that he simply wasn’t rich enough to buy her hotel). She has however turned down all of the bidders, stating that she wishes the Negresco to retain its French spirit and to remain the last independent luxury hotel on the Côte d’Azur.

To ensure that the Negresco remains untouched and her staff will still be employed once she dies, Jeanne created the ‘Mesnage Foundation’ in 2009. The foundation is an endowment fund which will inherit her wealth upon her death, including a villa in Saint-Vallier, near Grasse, and two George V apartments in Paris. Part of her inheritance will go to the development of the Negresco, and the rest will be shared amongst 3 charities close to Jeanne’s heart: animal rights, disability awareness and contributing to the “influence of French art”.

Since she had an operation on her knee a few years ago, Mme. Augier has been confined to a wheelchair and has to use the same lift to go up and down the 6 floors of the hotel as her mother did over 50 years ago, but she can still be found in the hotel bar and restaurant most days, sometimes with Lili and Lilou tucked beside her in her wheelchair, and she continues to reign over the hotel she rescued and renovated in 1957. 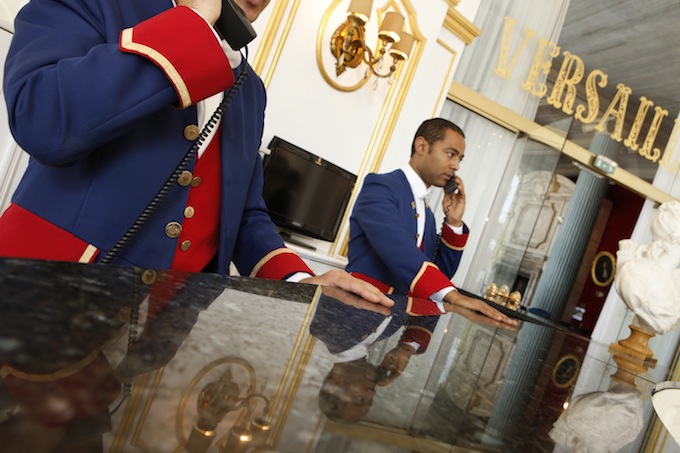 With her team she has organized 12 months of celebrations to mark the centenary of the Negresco, a centenary which began last year with a gala evening held at the hotel on the 5th July 2012 and which will culminate in June 2013 with a series of “Talent Days” to celebrate the different ‘behind the scenes’ trades which have helped to make the Negresco so successful over the years, including wine sommeliers, musicians, and artists.

If Jeanne Augier has her way, long after she is gone her world-renowned collection of art and antiques will still be on display in the hotel for its future guests and the Negresco which she has now called home for over 50 years will remain Nice’s most glamorous and well-known hotel for the next hundred years to come.

(You can read the first part of this article here)