A sure sign of Spring is the welcome return of the In&Out Nice Film Festival with the 14th edition of the event running from April 28 to May 7, 2022

And on the programme this year there will be many movie previews to look forward to after a brutal past two years of the Covid19 pandemic.

This year, In&Out Nice is combining a France-Portugal Season. With Queer Lisboa and In&Out, to showcase the international queer film festivals of Lisbon and Nice and they have also joined forces for EcoQueerÉcho, a programme addressing the themes of ecology, landscape, sustainability, and inter-species coexistence. 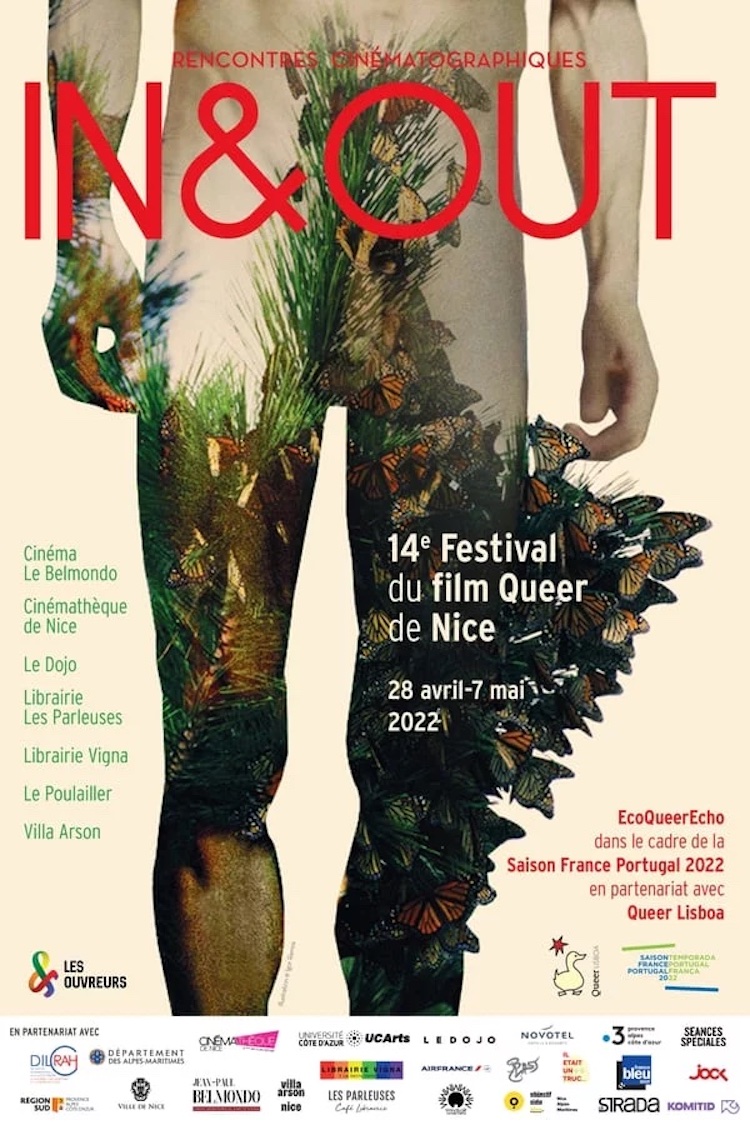 From April 28 to May 6, you will be able to attend more than 40 screenings spread over 6 locations in the city of Nice: the Cinémathèque de Nice, the Cinéma Le Belmondo, the Villa Arson, the Dojo (which also houses the festival offices) and the Librairie Vigna. The “Panorama” section will feature no less than 8 previews of LGBT films such as “Straight it up”, the meeting between a neurotic gay man and a young crazy actress, “Je tremble, ô Matador”, the expected adaptation of Pedro Lemebel’s novel, or “Le Nageur”.

You will also have the chance to watch films released in theatres but disappeared too quickly due to Covid19 from the screens such as: the moving “Moneyboys”, “Noël et sa mère” by the writer Arthur Dreyfus, “Au Cœur du bois” a sensitive incursion among the workers of the Bois de Boulogne, “Guermantes” by Christophe Honoré around his adaptation of Proust at the Comédie Française, the delicious “Mascarpone”.

The highlight of the festival: a retrospective and master class of João Pedro Rodrigues and João Rui Guerra da Mata (his partner and artistic director). With the opportunity to dive back into the filmography of the one who created the shocking film O Fantasma in 2000 and who has since then not ceased to explore the world of human desire.

A reflection on the place of archives in LGBT struggles will also be on the program with 4 screenings (including the indispensable “Paragraph 175″ and “En Corps +”, by Stéphane Gérard and Lionel Soukaz).

Finally, the festival will offer many other events such as the director and critic Jean-Sébastien Chauvin will be honored with his short film “Mars Exalté” which received a Teddy Award at the last Berlin festival.