If your favourite holiday or weekend hotspots do not yet include Manchester, that should change NOW! The first instalment of our two-part feature explores the city’s history and its pioneer spirit that make it so unique.

In July 2017, several weeks after the atrocious terrorist attack at Manchester Arena that cost 22 innocent lives, the city’s tourism board MARKETING MANCHESTER and countless local businesses invited 70 international media influencers, including RIVIERA BUZZ, to (re)-discover the city. What we saw surpassed our expectations in every way…

Pop quiz: Off the top of your head, what comes to your mind when you think about Manchester? Football? Music? Coronation Street? 19th century industrial revolution? And now, sadly, the Arena where the recent bombing took place? Good start. But that is about 0.1 percent of what there is to know about the thriving English city of some 530,000 that can best be described as a mix between New York for its architecture and Berlin for its hip arts scene and night life. We had the opportunity to visit for a long weekend and fell completely under its spell. Let us share with you what we saw and loved, while taking a good look behind the scene to find out what makes Manchester… Manchester. And we promise you, there are layers upon layers of discoveries to be made. 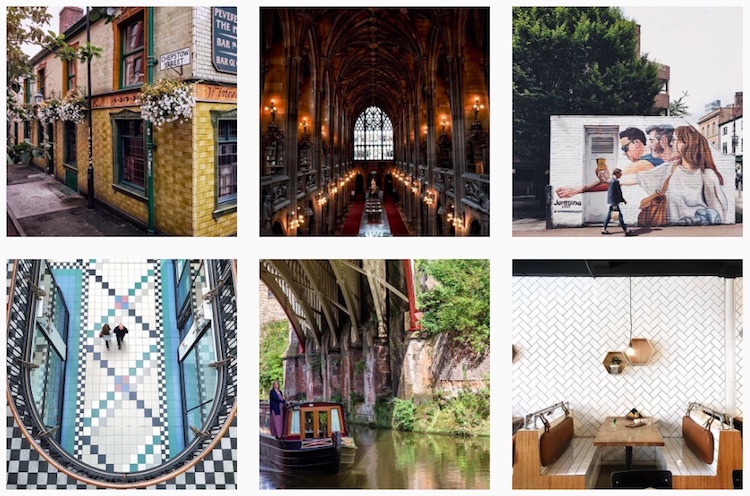 Once Upon A Time

Before we set out though, a trip back in time helps putting things in perspective and understanding the essence of modern day Manchester. Founded as a civilian Roman settlement in 79 AD (the same year Pompeii was destroyed by the Mount Vesuvius eruption), the manorial township led a fairly peaceful existence as a comfortable manorial township throughout the centuries. That changed though at the beginning of the 19th century when textile manufacture boomed during the Industrial Revolution, catapulting Manchester to the top of the charts as the world’s first industrialized city. 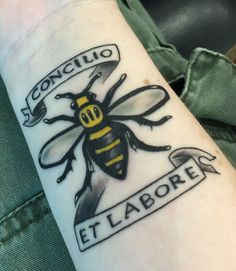 The city’s ubiquitous motif of the worker bee has its origins in those days. Its motto Concilio et Labore (“Wisdom and Effort”) symbolises Manchester’s leading role in new forms of mass production and Mancunians’ hard work and industrious spirit.

Cotton was King. Raw cotton, imported through the port of Liverpool from the West Indies and Southern states of America, was transported to Manchester via an intricate system of canals, still visible to this day. No fewer than 108 cotton mills and nearly 2,000 warehouses were found here, giving the city its hallmark architecture of industrial brick, iron and reinforced concrete.

By the mid 1800s, “Cottonopolis” had become the largest and most productive cotton spinning centre in the world, churning out 32% of global cotton production, and had earned a worldwide reputation as a financial and commercial centre. Many a fortune was built on the fine thread. And to this day, the term “manchester” is still used for household linens such as towels or bed sheets. No wonder that this model of a Victorian industrial city featured so prominently in the works of contemporaneous writers like Charles Dickens.

Rebel With A Cause 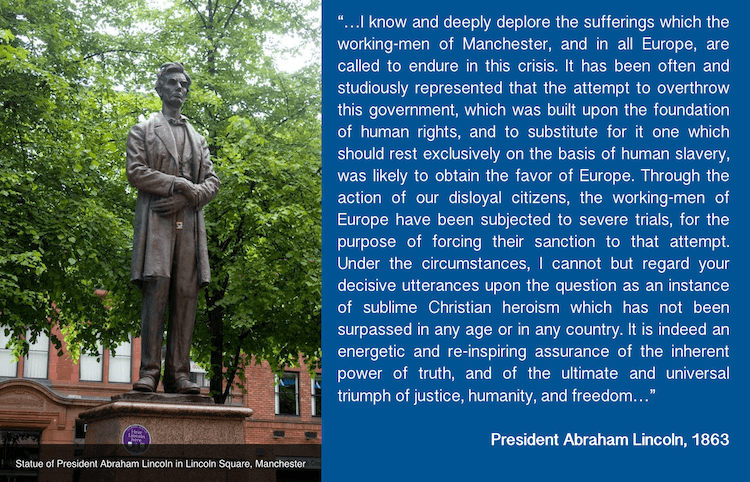 The people of Manchester are hard workers, and they care about the plight of others. That showed when in 1862 the city took a principled stand to support American President Abraham Lincoln in his fight for civil rights, heeding his appeal to blockade the import of slave-picked cotton. While neighbouring Liverpool preferred not to participate in the anti-Confederate movement that would eventually lead to the restoration of the Union and abolition of slavery, Manchester did, even if that meant suffering financial hardship through lost jobs. After winning his fight, Lincoln penned a heartfelt letter to the city thanking it for its sacrifices. Manchester, in return, erected a statue in honour of Honest Abe which to this day is a fine tourist attraction.

A City of Pioneers, Trailblazers, and Firsts

Manchester’s history of becoming the world’s first industrial city and then a staunch defender of civil rights, says a lot about its character, and that of its people. There is a tremendous spirit of solidarity and a love for pushing boundaries. One of the sayings around here is, “If London does one thing, Manchester will do another”, and it succeeds remarkably well. Among the many issues Manchester has championed over time, four have left a particularly deep impact on the world’s social fabric.

Manchester was a natural place for a movement such as the Suffragettes to begin. In the 19th century, the city was a hot-bed of radical and liberal thinking in many areas, political, social, economic and religious. After the Great Reform Act of 1832, when the male vote was extended, women established their own movement in 1867, but little progress was made until 1903 when Emmeline Pankhurst took matters in her own hands and formed a new organisation, the Women’s Social and Political Union (WSPU). Known as the Suffragettes, they turned to increasingly militant tactics in order to raise awareness. Many hurdles were yet to overcome until first a limited number of women were given the right to vote in 1918, and in 1928 all women gained the right to vote on equal grounds to men. A small but fine museum in Emmeline Parkhurst’s former home gives detailed insight into the Suffragettes’ fight for equality.

Manchester, one of the world’s leading gay-friendly cities, has also been one of the first ones to embrace its LBGT community. Gays and heteros happily mix and mingle in the trendy bars, cafés, galleries, and boutiques of vibrant Gay Village, located right next to the canal and Chinatown. Manchester’s annual Pride parade is among England’s oldest and most exuberant ones. The current festival includes a series of arts, music and cultural events all over the city as well as community events including poetry readings, quizzes and film showings, culminating in “The Big Weekend”, a 72-hour party during the August bank holiday weekend in Canal Street and the surrounding area, with a parade through the streets of Manchester. Not to forget the annual charity fundraiser, which in 25 years has raised over £1.3 million for unfunded local LGBT organisations, charities and community groups. The 2017 edition from Friday, 25 August through Monday, 28 August is again expecting tens of thousands of visitors from all over the world. 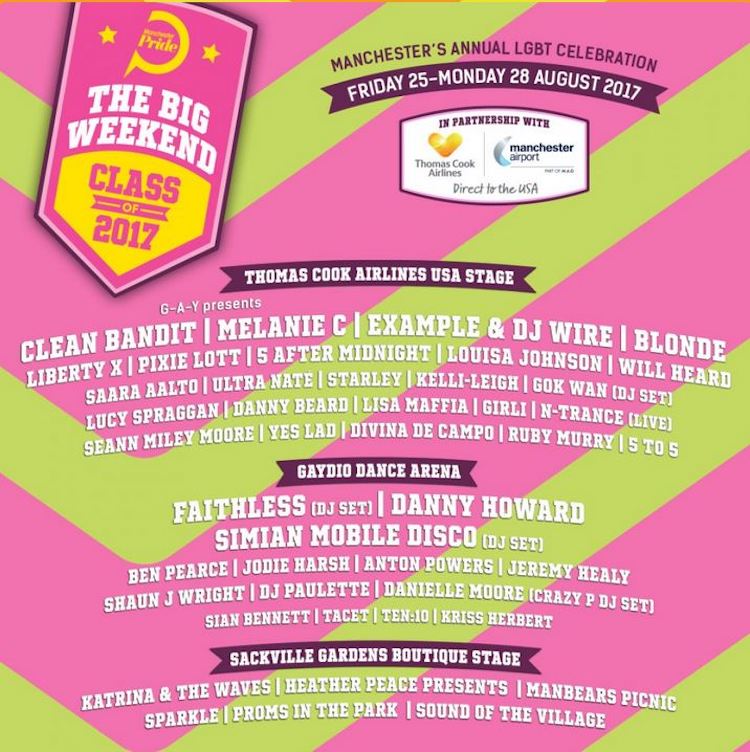 If you believe that nibbling on heritage carrots dunked in an organic kale-hemp-sea weed smoothie is a thoroughly modern lifestyle choice, think again. It was right here, 201 years ago, that vegetarianism became a thing. Founded by Reverend William Cowherd (no, the name is real…) in his church by the name of Beefsteak Chapel (ditto….), the movement started in Salford, Manchester’s twin city on the other side of the Irwell river, but quickly crossed the narrow bridge and found its fair share of followers, appropriately called Cowherdites. His motto, “If God had meant us to eat meat, then it would have come to us in edible form as is the ripened fruit.” But renouncing the flesh of animals did not equal abstaining from the joys of a gentleman’s club in the city centre, complete with smokers’ room, snooker rooms and several dining halls. Over time, the movement evolved into the Vegetarian Society (founded in 1847), which today still exists and continues its education about the benefits of a meat-free lifestyle. Among numerous educational activities it also offers amateurs and chefs Cordon Vert cooking classes.

Manny, as the city is sometimes lovingly referred to, has come a long way from its industrial cotton processing days and has rightfully earned its nickname The Original Modern City. The 20th century wrote some painful chapters, hitting especially hard during the Great Depression, World War II, and the 1996 IRA bombing. It got quiet in town. 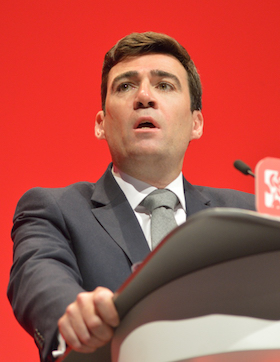 But Mancunians are a hardy lot, and the city has a longstanding tradition of visionary leadership – right now represented by young and dynamic mayor Andy Burnham (pictured left). Long-term strategic investment in education therefore resulted in two excellent universities and world class research facilities. Toward the end of the 20th century, however, graduates tended to flock to London for better jobs. To stop this brain drain, the city swiftly reacted by committing even greater resources and budgets to offer employment prospects enticing enough for professionals to stick around.

As a result, Manchester today has a large number of highly educated white-collar workers, especially in legal, financial, tech/research, and media jobs. In fact, as the third largest metropolitan economy in the UK, Manchester is ranked as a “beta world city”, putting it on a par with globally influential cities like Berlin and Geneva. With the presence of affluent yuppies and spend-happy Gens Y and Z comes the demand for an attractive lifestyle, and that has not been late in arriving. Large sections of the existing Victorian infrastructure have undergone significant redevelopment, and a bold new architectural signature has surfaced, utilizing existing brick and iron structures, warehouses, cotton mills, and industrial buildings and converting them into modern urban cityscapes, scintillating with glass and color splashes. Along with that, a tremendously active community of artists, musicians, and creatives cohabits synergistically with hip restaurants, funky pubs, and unique shops. Manchester is a city of contrasts, and it loves shining the spotlight on them rather than ironing them out, but the general vibe is decidedly young, progressive, and avant-garde… unsurprising in this city that has a habit of pushing boundaries. 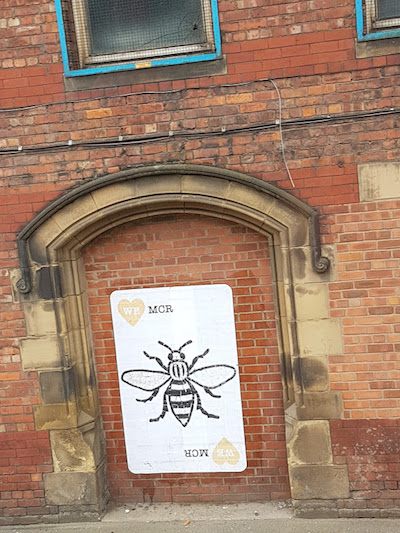 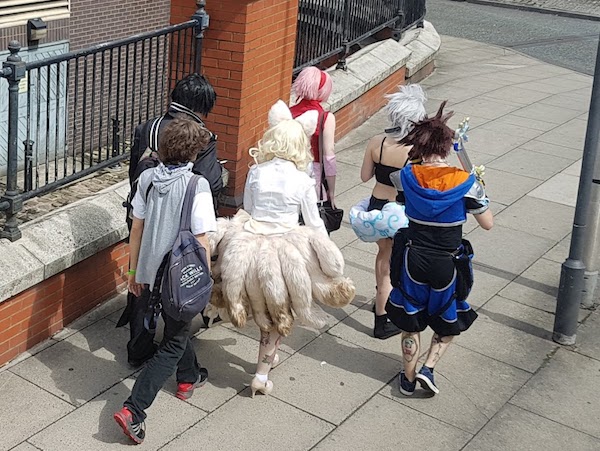 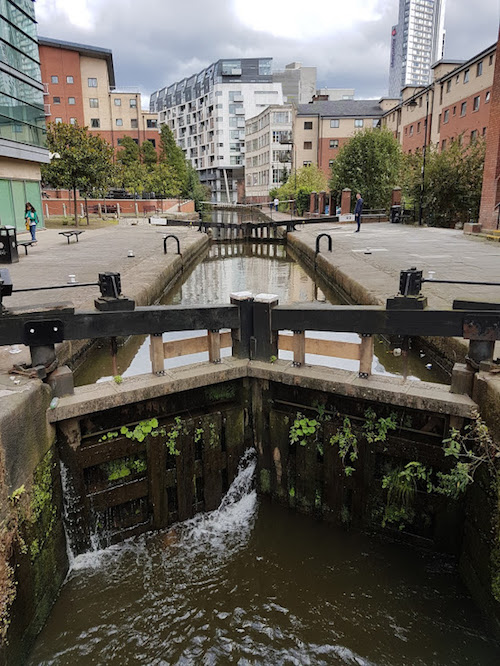 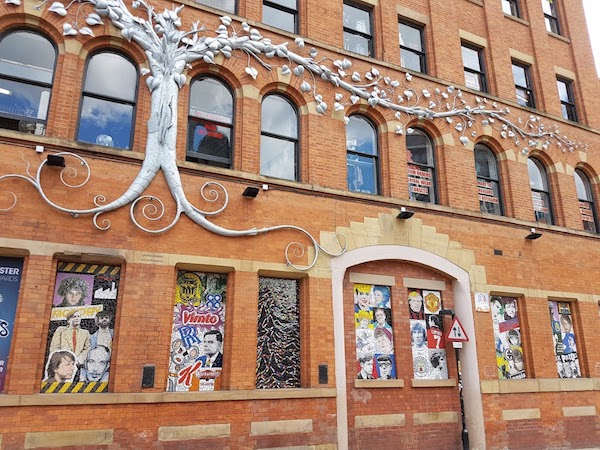 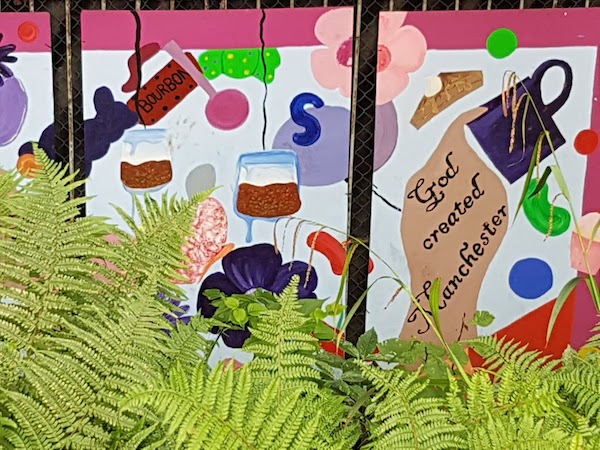 The ultimate City of Hospitality is packed to the gills with exciting things to see and do, but the one thing that sticks out above everything else is the Mancunians themselves. When you get there, be prepared for a culture shock, in the best possible sense. Everyone, and that is without exception EVERYONE, is incredibly friendly, approachable, and welcoming. And it’s not the “oh, I better be nice to a tourist” kind of politeness – no, it’s genuine and authentic. People here really love to meet you, they take immense pride in their city, and they go out of their way to make you love it as much as they do (which is not hard to accomplish…) And Mancunians are strong and resilient. The day after the heinous terrorist attack on May 22, 2017, they came together as one and declared themselves “Open for Business!” Not in a cynical way, they certainly mourned their dead, but not for a split second did they forget that life goes on. Writer Tony Walsh, better known as Longfella, summed it up best by reciting his poem “This Is The Place” at the memorial ceremony two days after the attack:

With these deeply moving words, it is time to end the first part of our feature on Manchester. Read all about the must-see sights, places, and people in our second instalment.

All images courtesy MARKETING MANCHESTER except photo of Andy Burnham by Rwendland (Own work) [CC BY-SA 4.0], via Wikimedia Commons