On September 7, an urban and rural festival of collective and individual initiatives with roots in Nice kicks off a global citizen’s eco-movement

“Sensitivity to ecological needs must not be a hardship. It is the foundation on which this 21st century is being built, and on which solidarity will replace generalized individualism.”

This is the credo that the new POPUL’AIR bee🐝popul’air initiative seeks to put from words into action when it launches its inaugural festival on September 7. Founded in Nice by former radio journalist Hélène Granouillac as an extension of her eco-friendly “do-tank” Terre Bleue, the goal is to motivate people around the world to spend the day consciously acting in favor of the environment, true to the festival’s motto “minimal carbon footprint, maximum awareness”.

The premise is simple: channel goodwill and good intentions into a collective effort. If everyone – adults and children, individuals and groups – gives just an hour or two of their time to participate in an activity of their choice… cleaning the banks of a river or a beach by the sea, organizing a bike ride, giving gardening advice, planting a tree, or educating others on relevant topics… it helps the martyred planet in a meaningful way. No act is too small, and opportunities are endless. But rather than imposing chores, Popul’air wants to encourage the development of a mindset that considers the needs of Mother Earth in everyday life. 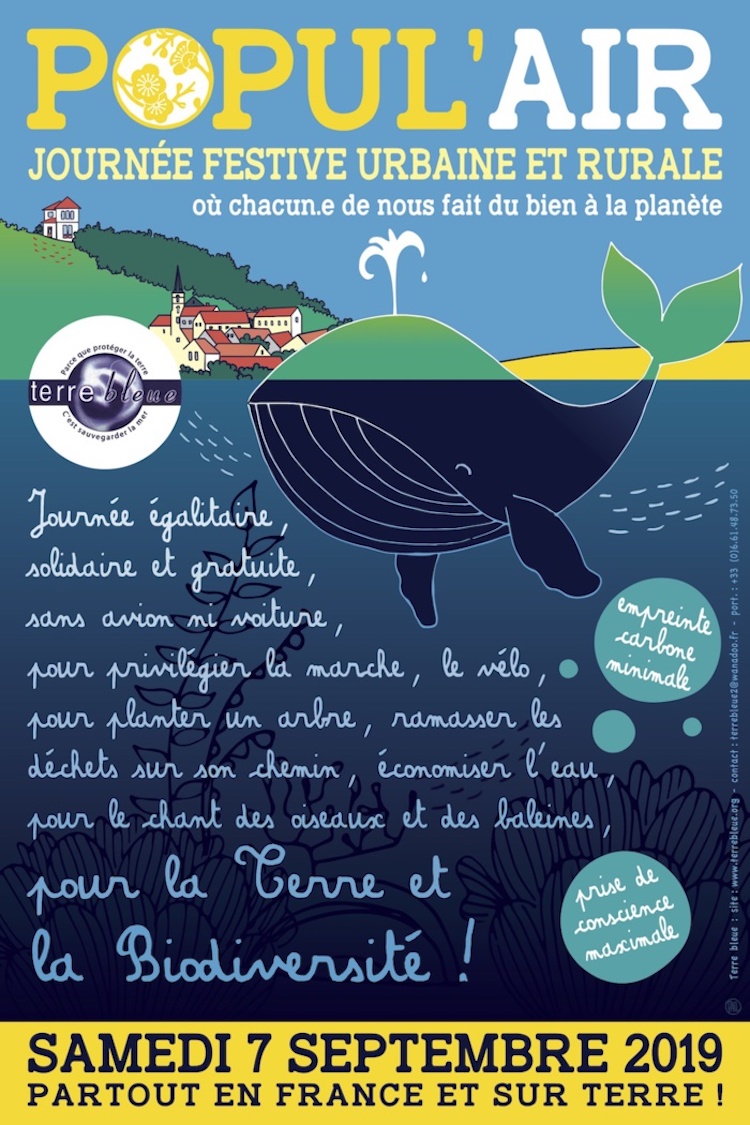 No one is expected to pull off a Greta Thunberg style campaign. “Our modest ambition is to convince as many people as possible to move from a narrow ‘me’ to an inclusive ‘we’”, says founder Helène Granouillac. The French départements of Alpes-Maritimes, Vendée, Nièvre, Island of La Réunion, and Hérault champion the cause. There, communities offer a range of activities to suit everyone and all ages. Walk barefoot over grassland in the city to reconnect with the ground, or plant dune vegetation for marine turtles to lay their eggs… Study biodiversity and seasonal climate change impact on a phenology platform and at the Observatoire des Saisons … support agroecology in the lower mountain ranges by planting hedges and seedlings for honey bees….

But it’s not just communities that do their part. One positive example of an individual-led campaign is the initiative undertaken by a group of teenage girls who call themselves “Generation Greta Thunberg”. They plan on planting trees in Perpignan in the Western Pyrenees which they will name after their movement. Today’s young women, tomorrows mothers – and social pioneers like their mothers before them? 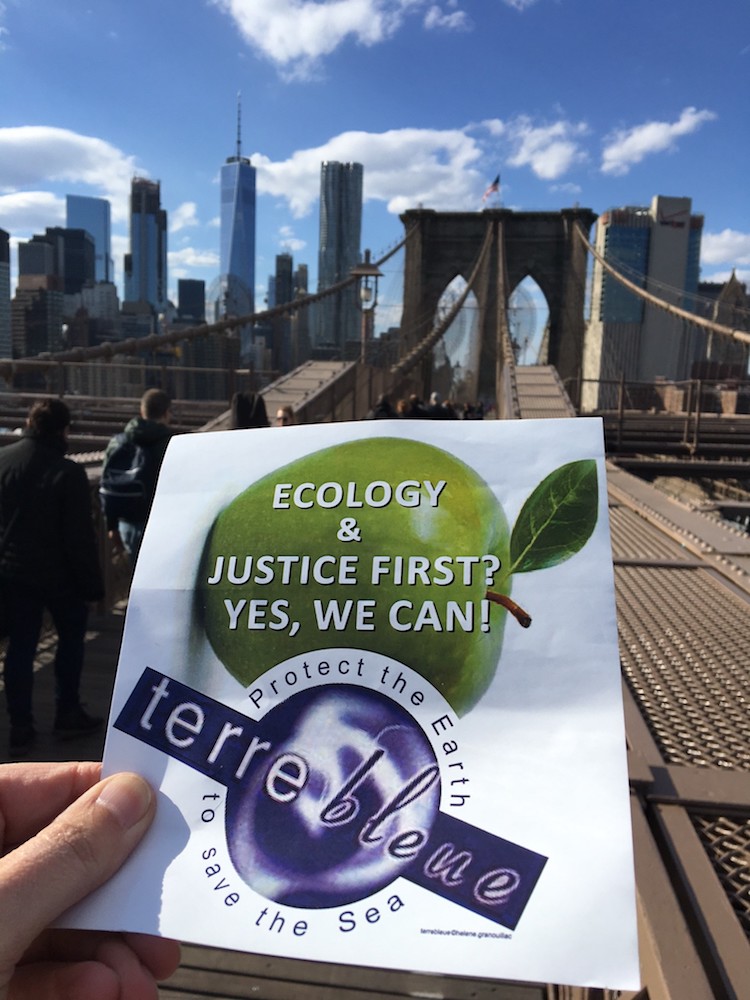 “We have marched for the climate, and voted, and the topic now seems to be respected, so now we mobilize to do good by the Earth,” is Terre Bleue’s leitmotif. The movement’s founder Hélène Granouillac created Terre Bleue in 1999 after a few years at Radio France. Having asked for and received training in environmental journalism – something that back then was far from mainstream – she started sending relevant columns to editors. “It has taken a long time to get the issue to the forefront of the media’s collective mind but sooner or later ecology will be at the heart of information because it will be at the heart of our concerns,” she argues.

In its 20 years of existence, Terre Bleue has scored some remarkable accomplishments. First among them, the creation of a Prix Ambassadeur Durable for the World Festival of Underwater Photography. This was followed by a 2001 top-notch exhibition of the photographic collection of Anita Conti, the first woman oceanographer, organized by Helène with the support of Museum d’Histoire Naturelle in Marseille – a first of its kind in the Mediterranean region. Terre Bleue’s 2006 “Chlorophyllia” urban greening campaign encouraged city dwellers to plant flowers and trees in flower boxes and abandoned green spaces. The 2007 Verr’écoleau campaign raised awareness for water as a precious commodity, threatened by rapid climate change. In 2009 Hélène designed the most visionary project to date, the Air Quality Reporter® to measure air pollution, initially sensor-based and later through an app. Even noise pollution has been getting air time since 2016. 2018 saw a climate march in Nice, once again initiated by Terre Bleue, uniting over 3,000 participants. And finally, “we also hope that the ‘maritime shuttle’, nicknamed ‘sea metro’, will one day be launched along the Côte d’Azur. We have been imagining it for almost twenty years, but no political will has so far been expressed to relieve land traffic by a clean energy-powered boat… We keep the faith.”

The Popul’air initiative – by its very definition a global event with minimal carbon footprint, logistics or travel – is not unlike a similar project started in the USA in 2006 by Maike Both. Unfuck The World and its now-institutionalized annual UTW day inspires people around the globe to take positive local action. While UTW focuses on issues such as community spirit, homelessness, and solidarity with the socially marginalized, there are clear parallels to Popul’air. The format is therefore not brand new for those who have always been inclined to give a helping hand; but with such a successful precedent, it is more readily accepted and adopted.

What is still missing at this time are an eco-compatible sponsor and a figure head, and offers and suggestions are being studied. “Since our HQ is in Nice, we thought of former TNN director Irina Brook, who, in addition to her personal commitment [to the cause], initiated the eco-focused Réveillons-Nous festival, bringing together many environmental actors,” Hélène hopes. Irina Brook, who is currently taking a break from work after five challenging years in Nice, and who has acquired a reputation as an eco-warrior, is certainly not deaf to this interest. In fact, the Popul’air organizers generally consider artists a valuable source to raise awareness, and dearly hope that actors, musicians, film producers, photographers, and painters will help make the topic more accessible and palatable to a wider audience.

But whatever high-profile name(s) will associate with this magnificent cause, the movement’s even more important goal is “to instill that from now on, we – as many of us as possible – consider this ‘Day 1, Year Zero to do good by planet Earth’ which has always been so generous towards us,” to cite Helène Granouillac again. So, what can you contribute to the September 7 Popul’air initiative to make it a roaring success…. And not just on that one day in the calendar but throughout the year?

“The human race – I am not telling you anything new – is a twisted knot of paradoxes and contradictions. We aspire to recover the rhythm of the seasons, to eat healthy, to breathe bearable air and drink clear water and yet, it is still difficult to resist a spur-of-the-moment weekend trip by plane, a stop at the fast food drive-in, a shopping spree, and the purchase of the last device connected… in short, all these anti-climatic markers represented by the symbols of consumerism.None of us can be ecologically irreproachable at all times and virtuous twenty-four hours a day. However, all the increasingly extreme and more frequent events that are disrupting the climate, the oceans, the nourishing soil, and therefore the lakes and rivers as well, are a wake-up call for each and every one of us to act, every day, everywhere.

This is already the case for the minority that we are, we “eco-lovers” – who refuse to be perceived only as obstacles to dreaming in circles – and, from now on, it will become so for a growing number of earthlings, willingly or… forcibly.

We must avoid this last resort. We still have the choice of opting for reason in different spheres of society, in our economic and domestic practices, rather than having to give in to more restrictive or, in the worst case scenario, coercive measures. A form of totalitarianism cannot be ruled out – a thesis which, although unpopular, remains plausible. The resource that could induce such extremes would, of course, be water. Of the three percent of fresh water available, the soon-to-be eight billion people use only the accessible one percent, the other two percent are not used because they are located at the poles. This immediately shows how vulnerable our dependence makes us.

This summer in France alone, 83 départements have a water restriction in place, not to mention the lack of groundwater in reservoirs. The question is undeniably raised: what if tomorrow states imposed water meters in our bathrooms and kitchens to limit our consumption? It will soon no longer be fiction.”