Big news both for space scientists and armchair astronauts: The ExoMars expedition just marked a huge milestone. And Cannes was on board.

While you likely went about your Wednesday afternoon in your accustomed way on 19th October, a show-stopping sensation happened on Mars – one of the kind that you dreamed about when you binge-watched Star Trek as a kid. For the first time in the history of mankind, a spacecraft from Europe landed on the Red Planet to explore possible traces of life. And the city of Cannes plays a crucial role in the spectacular ExoMars mission as the community in whose backyard the project was developed. To celebrate the historic Mars landing of the vessel dubbed Schiaparelli earlier that day, the Cannois were invited to a three hour live event at the Palais des Festivals et des Congrès to learn from leading space experts if mankind can hope for an extraterrestrial future.

In his opening speech, mayor David Lisnard could barely contain his excitement. “Cannes is a village, as we like to say here, a global village, an intergalactic village. And now it is also an interplanetary village. The ExoMars project is spearheaded by Thales Alenia Space, a French-Italian joint-venture which is dually based in Cannes la Bocca and Turin. Cannes is therefore a city of stars in more than just one sense…not just the ones on screen, but also the ones in space. It is, in fact, already the second most important city of space technology in France, and I am committed to making it a global space science leader. The ExoMars project is scientific, industrial, AND Cannois, and I am extremely proud of the talent we have here in this region.” 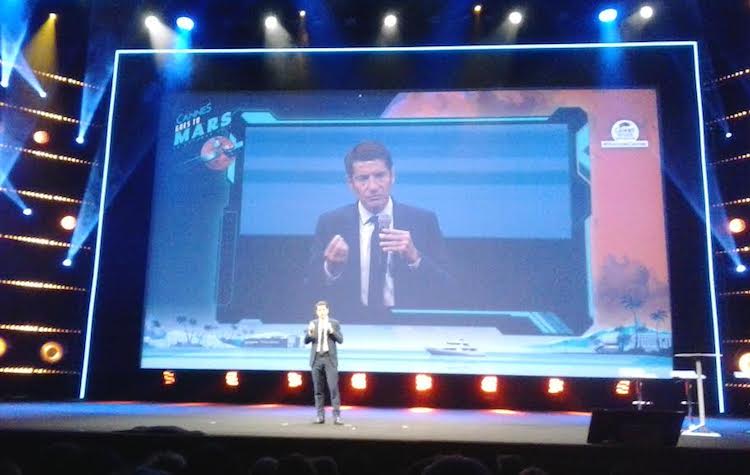 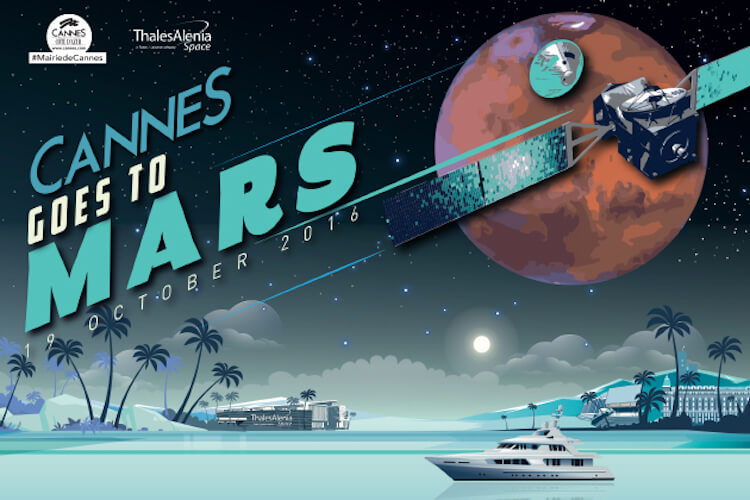 Thales Alenia Space is the prime contractor of the ExoMars project, which itself is a 50/50 joint program of ESA (European Space Agency) and Russian space agency Roscosmos. ExoMars marks Europe’s first landing on Mars, and the company’s second landing in the Solar System, after the Huygens mission to Titan in 2005. The 2016 mission involves a spacecraft comprising the TGO (Trace Gas Orbiter) and the EDM (Entry, descent and landing Demonstrator Module), dubbed Schiaparelli. It will pave the way to a follow-on mission in 2020, designed to land a rover on Mars with a drill that can bore 2 meters below the surface.

The ExoMars mission is primarily dedicated to the search for life. As far as traces of past life go, Mars, unlike Earth, was not exposed to violent tectonic activity. It is therefore possible to find old rocks that were not subject to excessively high temperatures, and ESA also hopes to find chemical biomarkers or micro-fossils. As for traces of current life, the search will focus on gases considered possible indicators of life, such as methane. 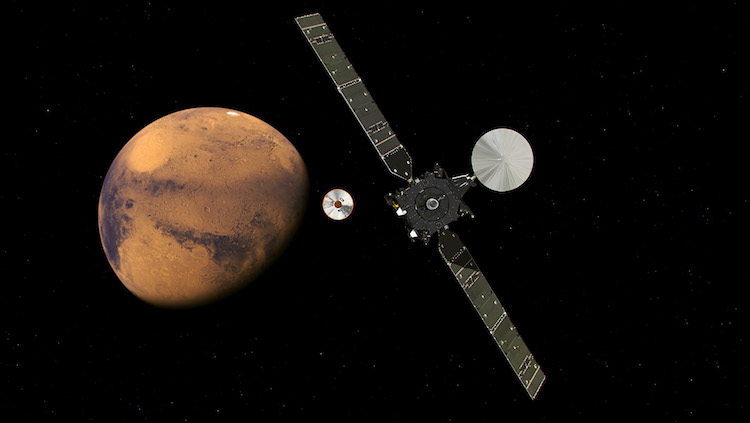 Addressing the question what challenges a manned Mars expedition would pose, astrophysicist Jean-Pierre Bibring evoked that beyond technology and logistics, the psychological factor may be the most complex one to handle. “So far, astronauts have at least some sort of visual reference. When they look outside the window of their spacecraft, they see the Earth. Far away, sure, but they still see it. No one can tell for sure what it does to a mind when there is absolutely no physical, visual connection with your home planet anymore.” Another major consideration, he says, is supply or assistance. Nothing and no one can get to you quickly in case of emergency, since you’re separated from Earth by a seven month journey, plus you need to wait till the two planets are approaching each other again on their individual orbits around the sun and align in a way that makes the trip possible in the first place. A factor few of those who dream of colonizing other planets have ever considered…

Assembled in just four short years, and launched from the Kourou space center in March 2016, ExoMars has had to meet incredible technical challenges: a seven month, 487 million kilometer voyage with a precision trajectory, the separation of the two modules as it approached the Martian atmosphere, a six minute sequence leading to a soft landing after maximum deceleration from 13g, going from 21,000KM/h to 10KM/h, and orbital positioning using the aero-braking method. (And you thought parallel parking was difficult?)

A live switch from Cannes to the Darmstadt, Germany based ESA control centre captured the emotional moments after landing, nothing short of the joy the ground crew in the Apollo 13 movie was experiencing after safely bringing men and vessel back to Earth. But excitement was quickly followed by going back to work to evaluate the data from landing if and when they arrive – at time of press the outcome was still uncertain.

Promising though as the project is, Jean-Pierre Bibring issued a philosophical reminder not to consider it a replay of the American-Russian race to space of the 1960s. “Back then it was about national pride. The Russians had beaten the Americans to space, and America needed to find ways to win back the upper hand. Today it is about long-term thinking about alternative life zones, not competition. We cannot dream of living on a distant planet if we don’t first get a handle on our problems on our home planet,” – a remark which earned him spontaneous applause from the audience.

As far as the existence of life on other planets is concerned, Jean-Pierre Bibring is skeptical: “The universe is finite, and we are starting to understand it fairly well. It takes such an incredible coincidence of physical and chemical elements, meteorological conditions, and other factors to come together in such a way that makes life possible, that personally I doubt there is much of a chance for it to have happened elsewhere.”

Astronaut Jean-François Clervoy answered the question concerning future plans after this mission by saying that the next step would be a second voyage in 2020, based on the data gleaned from this first one. He estimates that it will take until the 2030s for manned missions to begin, and 2050 may be the target for colonializing neighboring planets.

But to see what that adventure could be like, Cannes did what it is known best for – project a film: The first episode of Brian Grazer and Ron Howard’s Mars, a six-part National Geographic TV miniseries blending documentary and science fiction to dramatize humankind’s first trip to Mars in 2033, with abundant input from Nasa, SpaceX, and interviews with Elon Musk, Neil DeGrasse Tyson, The Martian author Andy Weir, and other experts on space exploration.

UPDATE, FRIDAY 21st OCTOBER: according to the evaluation of landing data published today, Schiaparelli likely did not land safely.