This coming February, the town of Menton celebrates the 80th annual Fête du Citron®, with the whole world joining in the celebrations!

The theme of the 80th Festival, which runs from Saturday 16th February until Wednesday 6th March, is “Around the World in 80 days”, based on the Jules Verne novel of the same name. A great opportunity to see the Pyramids, jump on board the Pacific railroad and discover the mysteries of India, all of which have been created from 80 tons of oranges and lemons in the middle of the town.

The idea for the Fête du Citron® was dreamed up in 1929 by the owner of the Hotel Riviera in Menton. At the time, Menton was the largest supplier of lemons for the whole of Europe and to celebrate this, the hotel put on a display of citrus fruit and flowers in the gardens. The idea was so successful, that the following year the hotel put the display on floats accompanied by local girls in traditional costumes and paraded through the town. The town council was so taken with this celebration that they decided to make the display into an official event, and so the Fête du Citron® as we know it today was born in 1934 and has been celebrated in Menton ever since. 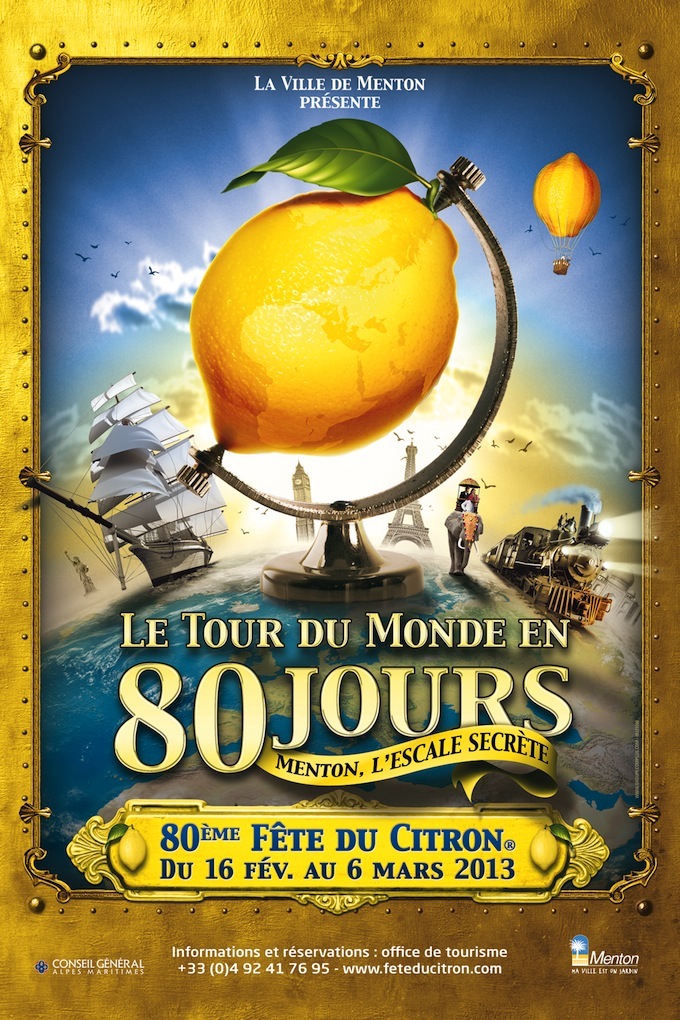 Although the town is no longer Europe’s biggest supplier of citrus fruit, lemons are still big business in the South of France and to this day Menton produces several varieties of lemon including the Santa Theresa, Villafranca, and Eureka, to name but a few. According to the experts, the trick to distinguishing a Menton lemon from its competitors is the shape, more oval than round, and its bright yellow colour. Every year almost 200 tons of the fruit are produced in Menton and the surrounding area, and to keep the tradition alive and to encourage production, over 5,000 new trees have been planted locally since the 1990s.

Over the years, the themes for the festival have been many and varied from “The Four Seasons” in 1966 to “Expedition to the Moon” in 1973, and “The Circus” in 1979 to “Disneyland in Lemon Country” in 1995. This year’s theme of “Around the World in 80 days” promises to be a spectacular one, with a display of citrus fruits and flowers in the Jardins Biovès from 10am to 6pm during the week and from 9am to 6pm at the weekend.

And don’t miss the nocturnal visits on Sunday 17th & 24th February, Thursday 21st & 28th February from 8:30pm to 10:30pm, when the Jardins Biovès will come alive with lights and music, illuminating the orange and lemon sculptures all over the gardens.

This year the Festival’s main parades will be taking place on Sunday 17th & 24th of February and on the 3rd March from 2:30pm on the Promenade du Soleil down at the seafront, and there will be two evening parades on Friday 22nd of February and 1st of March at 8:30pm for all the family to enjoy. A full programme of events may be found on the Festival website.

The festival will come to a close with a bang on Sunday 3rd of March with a firework display on the Esplanade Francis Palmero from 9pm. Tickets for this and all the other events are available from the Menton Tourist Office or online from their official ticketing website. Prices vary and discounts are available for children under 6 and the disabled.

Don’t miss out on this slice of local tradition, make sure you head over to the Fête du Citron® in Menton in February to voyage around this wonderful world created entirely in citrus fruit – no passport required!