Open since July, the redesigned floor retracing the Grimaldi Princes’ commitment to maritime exploration, research, and protection is a huge hit with visitors

A good 650,000 visitors cross the threshold of Monaco’s Musée Océanographique every year, knowing there is always something new and exciting to see. But this year’s landmark event has boosted attendance into record territory. In only six weeks following its opening, “Explorez”, the first-rate interactive exhibit dedicated to the three Monegasque rulers who over the course of a century have devoted substantial time, energy, and effort to the cause of the world’s oceans, has attracted another 175,000 guests to the Principality’s flagship museum. A sign of the tremendous quality of the exhibit but also of a rising awareness of the critical issues addressed.

Spread out over 700 sq.m., the tour wends its way around a massive ship hull, 27 m long and 3.3 m tall, proudly owning centre space. Thoroughly contemporary, the exhibit subscribes to modern codes of museum scenography. Rather than educating from a lectern, this is a hands-on immersion into the lives and interests of real people whose extraordinary destinies and interests shaped science and the world at large. The signature of internationally renowned exhibit designer Clémence Farrell is discrete but clearly legible to those who know her work, and perfectly complemented by Olivier Lafuma’s sound design. Divided into three major sections, each focuses on one Grimaldi prince and his specific contribution to oceanographic sciences.

If Monaco’s Oceanographic Museum exists today, it is thanks to the vision of Prince Albert I (1848-1922), the current sovereign’s great-great-grandfather. Known as The Prince of the Seas, he devoted much of his life to the emerging science of oceanography and led 28 exploratory expeditions from Cape Verde to the Arctic. In 1910, he had the museum built to house a scientific research institute and library along with collections of artefacts related to his and other sailors’ maritime exploration.

The exhibit follows his story over the course of 30 years. Video inserts brings the monarch back to life as he (or rather his alter ego, an actor) tells the visitor about his travels and the people he crossed along the way. A fascinating glimpse into a bygone era. On the opposite side of the corridor, display cases mounted on the ship hull feature objects and artefacts to illustrate the prince’s narrative and quest to educate. A carbon-copy true representation of his ship lab, ca. 1903, looks as if he had just stepped away to get lunch. And then it’s your turn to slip on a shipboard scientist’s lab coat and get busy checking the weather forecast, taking photos, or cataloguing strange sea creatures….

“Oceanography has an obligation to highlight the danger caused in all countries by the abuse and exploitation of its resources due to poor regulation or monitoring. Maybe its most noble task is to bring this to everyone’s care and attention.” — Prince Albert I, 1902

When Prince Rainier (1923-2005) took over the reign of Monaco in 1949, the principality was not in great shape. Gifted with tremendous business acumen, the young sovereign succeeded in turning his country’s fate around and steering it in toward a fiscally and financially sound future. Sensitized by his great-grandfather’s work for the oceans of the world, he was also keenly aware of the ecological issues that began rearing their heads. 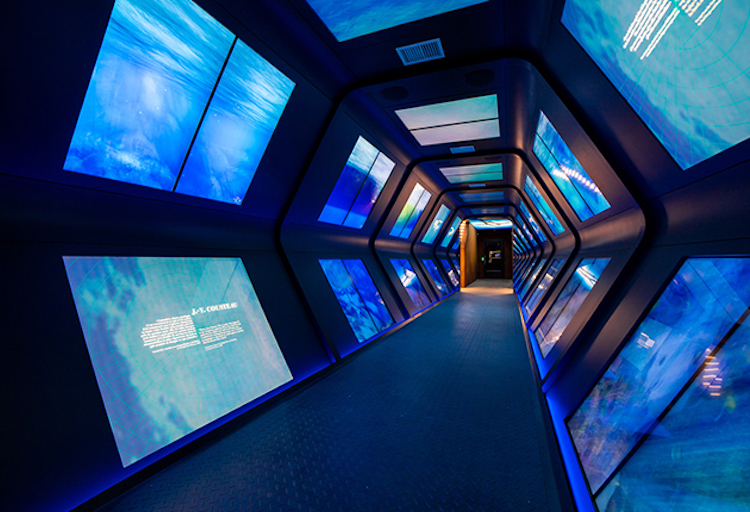 His reign coincided with the height of activities of Jacques Cousteau, the undisputed Father of deep ocean exploration. Incidentally, Cousteau was also the Musée Océanographique’s director for 31 years, from 1957 to 1988. Working in tandem, the two men greatly advanced and professionalized oceanographic sciences by using state of the art technology and academic research, and by legislating ocean protection. A quantum leap well ahead of its time, this period is beautifully documented in the section dedicated to Prince Rainier III which allows visitors to interactively examine the methodologies applied and the results gleaned from Prince Rainier’s involvement in the oceanographic cause.

A special exhibit placed inside the ship hull is dedicated to Jacques Cousteau’s universe, where 32 video screens plunge you 300 meters below sea level. Pay special attention to the soundscape created by composer and sound designer Olivier Lafuma which complements the immersive experience to perfection.

“It is up to us, Heads of State, to seize this opportunity to make a lasting recovery on the course of our blue planet and thus enable our children and future generations to evolve in a more equitable and healthy world.” — Prince Rainier III, UN conference in Rio de Janeiro, 1992

The third Grimaldi prince honored in this exhibit is HSH Prince Albert II (*1958), Monaco’s current ruler since 2005…. but one might as well call him the ruler of the world of ecology. Not content with just saving the oceans, he has extended his vocal advocacy to terrestrial resources and climate change.

For well over a decade now, this hands-on monarch has demonstrated how to put one’s powers and privileges to good use. He is not afraid to get straight in the heart of the action, to help with coastal cleanup, or to sit down with locals in remote corners of the planet to listen to their concerns and plights. Next you know, he is pleading passionately from a U.N. lectern in New York or creating private ecological initiatives to mend the damage less responsible world leaders have left in their wake.

Uniting his great-grandfather’s intellectual curiosity and his father’s astute business management skills, Prince Albert II puts both to good use, and the advances are astounding. Under his leadership, high profile research expeditions like Monaco Explorations are roaming the seven seas to bring home new material; and annual star-powered events like Monaco Conservation Week or Monaco Ocean Gala raise public awareness for the causes dear to the Sovereign’s heart. This tireless work is showcased in the upstairs gallery of the loft-like exhibition space, and needless to say that Monseigneur was involved in every step of the way to create this extraordinary museum space.

“Because to save our planet, to change a system that destroys it step by step, we will need all the ideas, all the willings, all the mobilizable means. We will need to multiply the initiatives, from the most confidential to the most global ones, from the most classical to the most innovative ones. And we will need to do everything to convince the world to change with us. This is our destiny today, the destiny of our generations: taking these problems head on, to save this planet before it is too late. It is our responsibility and that is why we are here.” — H.S.H. Prince Albert II of Monaco

Pedagogically engaging as it is, this new exhibit does not lecture – instead, it aims to transmit information and knowledge in a playful and interactive way, suitable for all ages. The explorer, the savior of the world – that’s you! Among the many positive visitor comments, a recurrent theme: “Thanks to this new space, I realized that carbon dioxide pollution really degrades our planet, and that it is getting worse and worse. This visit today was a real eye opener!” (Olivier, age 49). For museum director Robert Calcagno, the exhibit serves to bring everyone from visitors to politicians, NGOs to business owners, on Team Save The Planet. 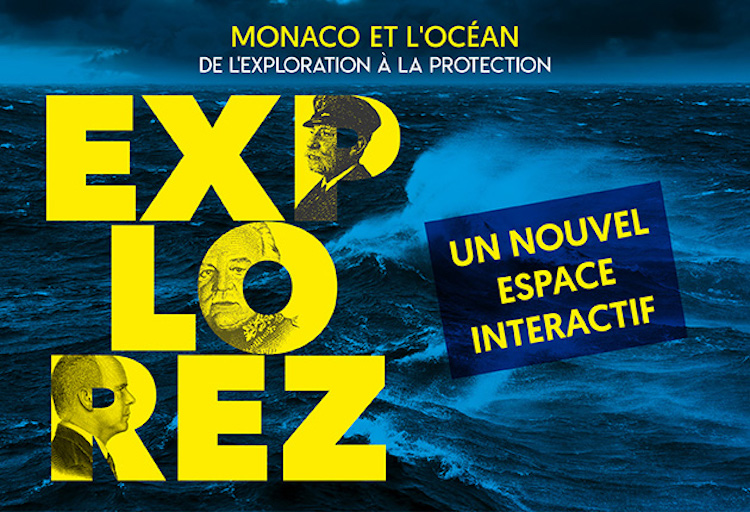 This exhibition is a monumental achievement, a milestone in museum scenography and architecture but also a major exclamation mark in the annals of Earth and ocean preservation. When you visit, plan in at least several hours – we promise you will want to spend that time here, and more, and you will emerge with a new-found sense of the preciousness of this marvelous blue dot in space we call home.