The 2015 Nice Russian Film Festival is almost underway, and it is the City of Nice’s way to honour 160 years of privileged relations with Russia.

The City of Nice, the Russian government, and Gosfilmofond – the world biggest cinematographic archive with more than one million visual masterpieces from the Lumières brothers in 1895 to contemporary creations – teamed up, and the outcome is the third edition of the Russian film festival from September 22 to 26 at the Cinémathèque de Nice.

With this year’s theme of the “70th Anniversary of the End of World War II”, all films present their own take on that chapter of history, among them one of the chef-œuvres of Russian cinematography, “The Cranes Are Flying”, an international success winning the Palme d’Or at the 1958 Cannes Film Festival.

Another highlight: Alexandre Sokourov, one of the brightest names in the world of Russian cinema and holder of more than 30 prestigious international cinema awards, including a “Golden Lion” of Mostra di Venezia, pre-premieres his new film “Francofonia” to local cinephiles way ahead of the movie’s official release in France. Having initially submitted his work to the Cannes Film Festival where it was turned down, he laments “the perceived political censorship, but even much worse, the humanitarian censorship currently taking place in Europe.” Russia loves Europe, he states emphatically, and Russians are pained watching what is going on. “Cinema is not about making box office – cinema is about humanity.” 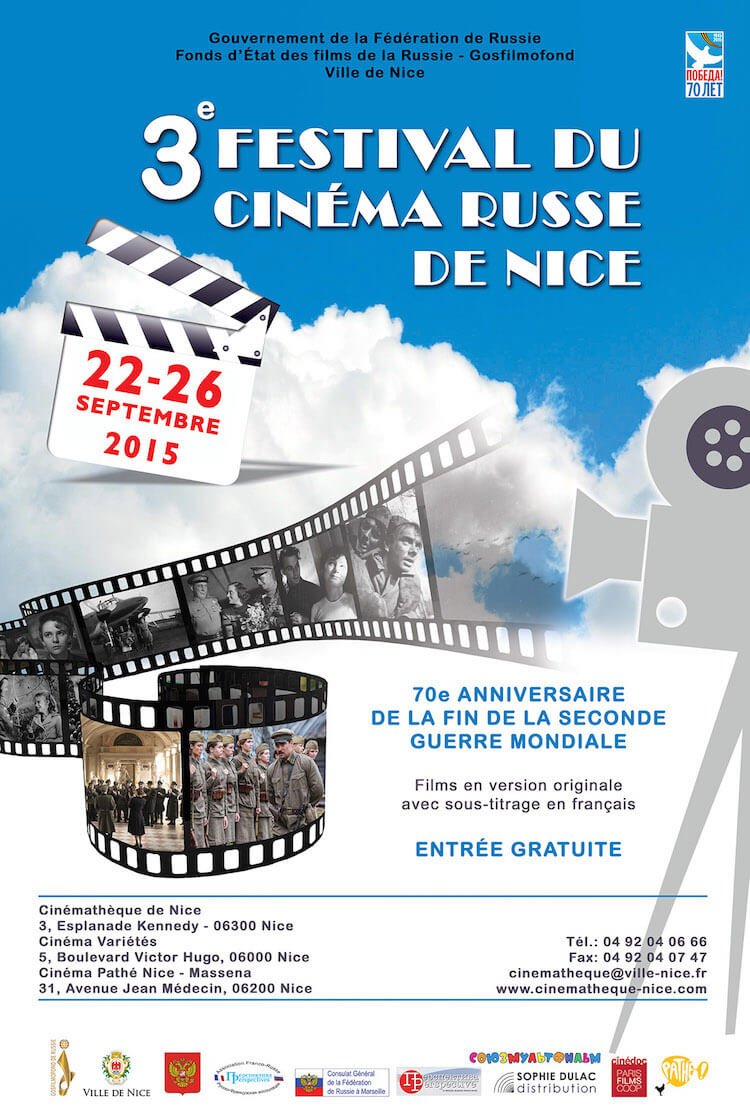 Over the five day festival, the Niçois are privy to more than 20 original movies produced in Russia at the Cinéma Variétés (5, bd. Victor Hugo), Cinémathèque (3, esplanade Kennedy) and Cinéma Pathé Masséna (31, av. Jean Médecin). Each film, in Russian original and subtitled in French, features a short introduction and viewers have a chance for a Q&A with members of the production.

September 24 and 25 hosts special programs for kids, with animated cartoons at 10 a.m.

Admission for all sessions is free but seating is limited. So come early to secure your place.

Both the opening and closing ceremonies are bilingual, with Gouzel Aguichina, one of the leaders of Marseille-based NGO “Perspektiva”, and Andrey M. Schuchard, an actor known for his role in Kosmodrome, translating.

Elegantly bridging both countries, Kosmodrome, the multi-award winning short film by French-Italian director Youcef Mahmoudi, was produced in the Rivieran capital and is set in the Siberian wilderness. It is not being shown in this festival which features exclusively Russian filmmakers but Youcef has an affinity for the country. “I am inspired by Russia’s recent history and one of my next projects will be based on a parable written by a modern Russian author, with a very international cast and crew,” the talented young director shares with us.

Spasibo Russia, for the unique possibility to meet award-winning filmmakers, producers, acclaimed actors, authors and entrepreneurs from the country whose contribution to the global history of the 7th art is widely recognized.

For the full programmes, locations and showtimes, visit the Perspectiva website.