There is lots of talk about cross-genre theatre…maybe, some time. Sophie Brech and Louis Fortier are already a few steps ahead.

“Louis, I think this is the beginning of a beautiful friendship.” – Like in the immortal Casablanca quote, it certainly was a beautiful friendship that first brought aspiring English actress Sophie Brech and her Quebecois classmate Louis Fortier together at Jacques Lecoq’s International School of Theater in Paris 17 years ago. And it has since matured into a very happy marriage, and an artistic collaboration of rare creativity and poetry. Their play, The Tragi-comic Destiny of Tubby and Nottubby, is winning hearts and critical acclaim all over the world, and recently stopped over at the Théâtre National de Nice where they utterly charmed a notoriously hard-to-please audience.

Tubby and Nottubby is a rare gem: The story of two “larger than life characters” of the humorous, storytelling kind, a poetic and magical version of Stan and Ollie. Theirs is a playful, philosophical tale of uniting contrasts, bridging differences, and overcoming obstacles: One Christmas eve in London, fat Tubby and skinny Nottubby literally bump into each other as they are both preparing their farewell from this wicked world. They discover kinship and decide to suspend their somber plans for now… and to go on a journey together, a journey of eventful discovery. Discovery of things, characters, places, and eventually, of themselves and each other. 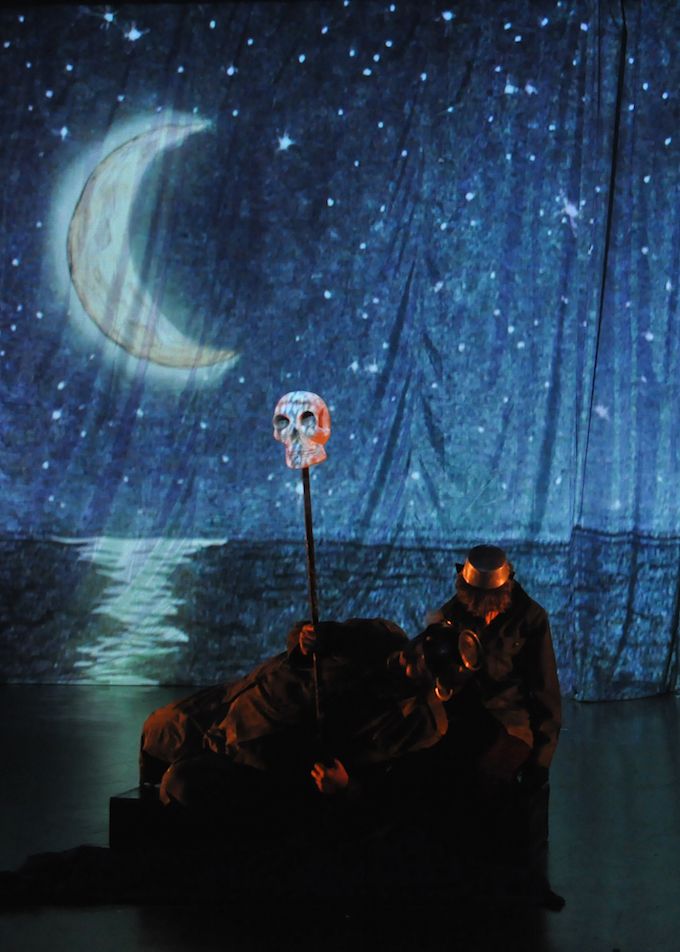 This bilingual play manages to touch adults as much as children; evokes an eerily premonitory “Brave New World, ed. 2014” scenario; incorporates a good dose of Shakespeare, en passant Homer’s Odyssey, and the Greek saga of Orpheus and Eurydice; contrasts human behavior and emotions; veers between laugh-out-loud funny and quietly introspective; and culminates in a happy end…. with a twist. The music is as touching as the brilliant light effects… simple, refined, and elegantly understated accents, subtly suggesting moods rather than dictating them. And whether intentional or not, the play represents exactly who Tubby (Louis) and Nottubby (Sophie) are as people.

They come from two different worlds which outwardly have little in common: Louis Fortier grew up in a modest and sometimes rough suburb of Quebec City, Canada, that was far away from the uptown world of the arts and theatre among the chic cafés and boutiques.

It was many years later, whilst studying literature at The University of Montreal with the goal to teach – even though in his heart of hearts he knew that he was not cut out for that career – that he had his first encounter with theatre when he chose to join the University Theatre Company as a performer. A decision that changed his life: In 1996, profoundly moved by the artistic resistance in Bosnia, he dropped everything, bought a single ticket to Paris, and from there worked his way into wartorn Sarajevo.

And there things happened, and happened fast. On his first night there, Louis told his landlady that he was interested in theater. She promptly called Dino Mustafic (then the young leader of the artistic resistance and now an internationally acclaimed director) …and before he knew it, Dino had graciously arranged for Louis to be a guest student at The Academy of Performing Arts in Sarajevo. “Serendipity at work,” he calls it.

The following year, he returned to Paris, enrolling at The Jacques Lecoq International Theatre School, and there he crossed paths with Sophie Brech, a beautiful young acting student from England who had spent part of her childhood in Sao Paulo, Brazil. Born into an alternative family, she and her six siblings lived in a TV-free home. Having to come up with their own ways to keep themselves entertained awakened Sophie’s creativity and a love for performing. Drawn to foreign shores early on, she gave in to her urge as soon as she could, and found herself in Paris, with no French other than “je t”aime”, a phrase she bestowed freely on everyone in her environment, blissfully unaware of the profundity of its meaning. And so her baker, her neighbor, any random stranger, and of course also her classmate Louis found themselves at the receiving end of her declarations…. 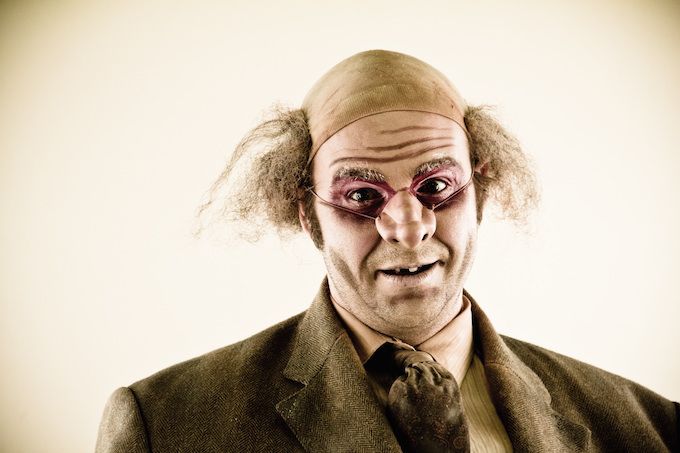 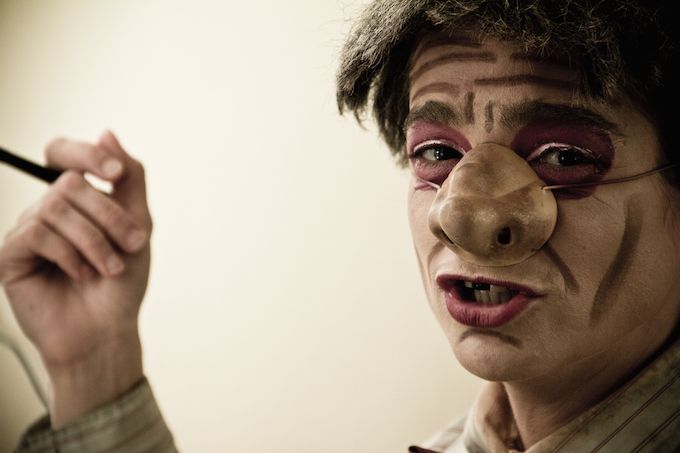 Louis didn’t mind at all though because he and Sophie had clicked right away, and they soon became inseparable, despite the school’s declared policy to discourage relationships. “She makes me laugh…. No one has ever made me laugh as much as she does,” he raves, looking at her with a gaze that betrays profound love and admiration. And it is easy to see why. Sophie is much like him – intelligent, warm, bubbly, openminded, caring, and irresistibly charming, with a smile that makes glaciers melt. Together, they are the kind of couple you think only exists in movies, the kind that finishes each other’s sentences in fine Franglais, that is each other’s rock. Maybe it is that complicité that makes them such an artistic powerhouse. Sensing that in each other, they set out to work together.

Paris has been home to them ever since they met, and where they have been working with the Théâtre Fools and Feathers company since 2009, performing original creations such as Tubby and Nottubby and Out of the Dark. Sought-after by directors like Robert Lepage, Shuji Onodera, Omar Porras, and Andrew Wilson, they have come a long way from the street performers they first set out as, to being invited to play all over the world. South Korea, Japan, Canada, or Afghanistan, to name but a few.

Playing in Kabul in June 2013 at the joint invitation of the Institut Français, the British Arts Council, and the Goethe Institute really left a mark on both of them. “We didn’t know what to expect…maybe no one was going to come to see the play, not to mention the extreme and constant danger,” Louis tells us. “There were four suicide attacks during our two week stay in Kabul.” But the culture-deprived local population flocked to the French Institute and welcomed artists and play with incredible enthusiasm. It was a triumph, which not even the total blackout 20 minutes before the performance could mar. 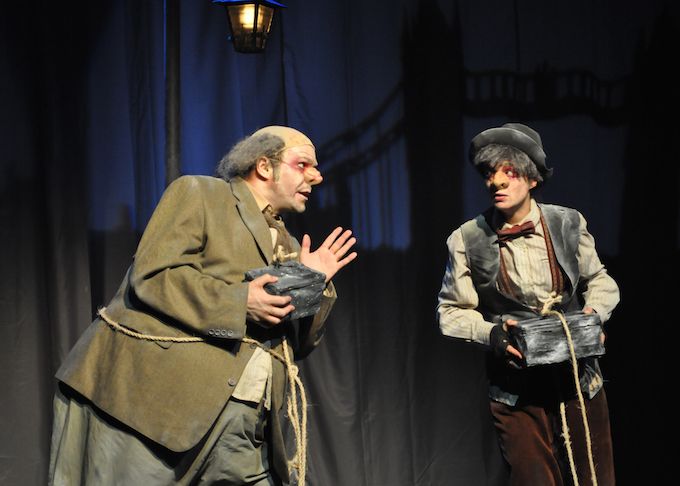 Sophie and Louis also ran theatre workshops both at The National Theater and at The University of Kabul, marveling at the vitality, talent and courage of the actors who continued to come back day after day, despite some of their family’s disapproval and the Talibans’ threats. They witnessed the transformation of shy young women into confident ones within just a few days, simply because they were encouraged to push the envelope of their daily existence a little bit. “What a journey! It takes so little and it does so much,” Sophie says.

It may also have to do with their approach to what theater is. “To quote our teacher Jacques Lecoq, theater is there to change life. It allows you to be in touch with your emotions. You don’t have to be afraid of someone like Shakespeare, we want to show how much fun, how concrete, how poetic his work really is,” Louis adds. Theater is the great uniter, as they have often experienced, and it has also united their two families in the English Cotswolds and in Quebec City who are now very proud of their talented children, and have for themselves discovered the fascinating world of the stage.

And it is that philosophy of an “accessible theater” that they share with Irina Brook, Director of the Théâtre National de Nice. After having seen Tubby and Nottubby near Paris in 2013 – another instance of serendipity at play here – she programmed the show soon after she was called to lead the TNN in January 2014.

A perfect move both for the artists and the audience. “What an experience! The atmosphere was great and we felt very much loved and welcome in Nice. Working with Irina was unique – beautifully challenging…. and chapeau to the tech teams, our own and that of the TNN, stage manager Sauveur Fargione, sound engineer Guillaume Pomares and light engineer Alex Toscani!”, Sophie and Louis jointly remember their passage at the TNN. The appreciation certainly went both ways…. the Niçois public was profoundly touched by Tubby and Nottubby’s bittersweet story and left in a rare state of adoration, talking about the play for days after.

Next on Sophie and Louis’ schedule, a tour of Western Canada at the invitation of the Cercle Molière, in Winnipeg, and L’Unitheatre, in Edmonton for a series of 25 performances. They will return to perform near Paris at the end of March 2015. 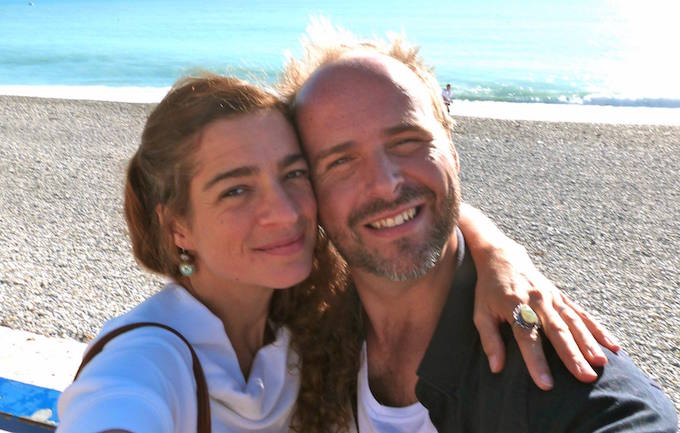 “We do work separately and for other people from time to time,” Louis says, “but truth be told, we prefer to be together, even at half pay.” Such stuff as dreams are made of, and happy marriages, and beautiful theater…..