At the end of its 20th anniversary jubilee year, Bastide St. Antoine in Grasse looks back in appreciation and goes forward with unbridled joy.

To succeed, a luxury hospitality establishment needs gorgeous premises and excellent cuisine. To become a legend, it needs a heart and a soul. La Bastide St. Antoine, the genteel hotel/restaurant under the reign of noted chef Jacques Chibois, is blessed with all of those. The first impression of the cream-coloured manor, tucked away in the hilly outskirts of romantic Grasse, tells the entire story: it exudes elegance without being pretentious. From the refined interior to the tasty cuisine and on to the immaculately kept grounds with sweeping views over Eastern Provence … everything here bears the signature of its owner who for all his success has remained a humble man. Who is Jacques Chibois, this sixty-something man, brimming with youthful energy and passion, and yet so unhurried when generously sharing his time and life philosophy? Spending an afternoon in his presence is taking a trip back in time to the days when the world was a better place, and at the same time a peek into a brighter future.

Charismatic and affable, his bespectacled eyes twinkling with his tremendous joie de vivre, Jacques Chibois is a two-star chef with a Grandes Tables du Monde distinction, the owner of a 5***** Relais & Châteaux hotel, a philosopher, and a storyteller. His modest rural background has minted the Limousin native the way he is – down-to-earth, humble, generous, jovial, quick to laugh. In the beginning, he seemed to have his life path cut out for him in his father’s mill, pursuing agricultural studies. But times were a’changing … in the early 1970s big agro was taking over, and Jacques needed to adapt quickly. He had enjoyed the cheerful atmosphere around his mother’s excellent table d’hôte, and so decided to apprentice as a cook. But not in any kitchen – no … he learned his trade from Delaveyne, Vergé, and Outhier – names that are music to the ears of French gourmets.

Revealing his talent quickly, young Jacques next went on to work with Michel Guérard – that’s like having Morgan Freeman or Lebron James for your private coach – for five years. Next stops, his military service where a four star general requisitioned his services as a private chef, on to ruling the kitchen at the legendary Regine’s in Paris, New York, and London, and hosting private dinners for ministers and other high-ranking dignitaries. In 1981 he landed in Cannes, having been tapped as chef of the sumptuous Grey d’Albion hotel’s four restaurants. Two Michelin stars, four Gault & Millau “Toques”, a Chef of the Year award, and numerous opening and closing dinners for the Cannes Film Festival quickly cemented his reputation as one of the top French chefs. And the list of distinctions grew longer and longer over the years …

In 1996, Jacques and his wife Odette looked around for their own hotel-restaurant, and in their search came across a late 17th century Provençal property off the beaten path. Instant coup de cœur! Although the manor and its extensive grounds were not in great shape, the couple could see the potential. The only thing they worried about was whether their clientèle from the coastal towns would actually venture 20km inland to Grasse.

But the Chibois’ purchased the property anyway and undertook extensive work to restore the historic manor to its former glory, fully respecting its identity while adding contemporary convenience to the 16 suites and the restaurant. Renovating such an architectural jewel and breathing new life into it was a Herculean task, and the last bucket would literally only disappear the night before opening. Madame’s signature is visible throughout, from the choice of furniture and fabrics to the floral arrangements – everything is skillfully orchestrated into a symphony of taste, mellow pastels with Mediterranean accents, with careful attention to the smallest details. Artwork by the family’s favourite sculptor, Jean-Philippe Richard, is on display around the house. And the œuvre is framed by a luscious park created by internationally renowned master landscaper Jean Mus, who skillfully composed a botanical tableau of 2,000 year old olive trees, fragrant lavender and rosemary, and colourful flowers, all dotted with the play of light and shadow. A pretty tortoiseshell cat named Olive is the finishing touch to the cozy country manor ambience. Perfect proof that style can co-exist with conviviality.

But if the couple ever entertained a moment’s worth of worry about patrons not coming, these fears would soon prove to be unfounded. Within a very short time, they all showed up – Jacques’ gastronomic cuisine is simply too good to resist. Its siren call was also soon heard beyond the borders of Grasse, and guests flocked in from the four corners of France and the world. And this is how it has been for the past 20 years…. with a workload that would send a lesser man spinning: seven days a week, year round with the exception of two weeks of annual holidays in November – which again are used to work on ongoing upgrades – Jacques oversees his hotel and his kitchen. But to him, it’s not work, it’s his life, his passion, his joy and pride.

And as if that were not enough work, he has done something else during these 20 years: a tireless weaver of local social fabric, he has brought tremendous value to his community by working with local suppliers, and mentoring tomorrow’s culinary stars. And he is an engine for tourism: for all the scenic townscape and its legendary lavender and flower fields, no visit to the world capital of perfume is complete without a pilgrimage to Maître Jacques’ table. He issues a magazine, titled Maître Jacques, in which he features his recipes but also presents local businesses to his readers. And he creates jobs, lots of them. Between 70 and 80 staff take care of guests’ wellbeing. For this civic engagement and contribution to local economy, Jacques Chibois was therefore honoured with the Medaille d’Honneur du Département during his 20 year anniversary celebration. 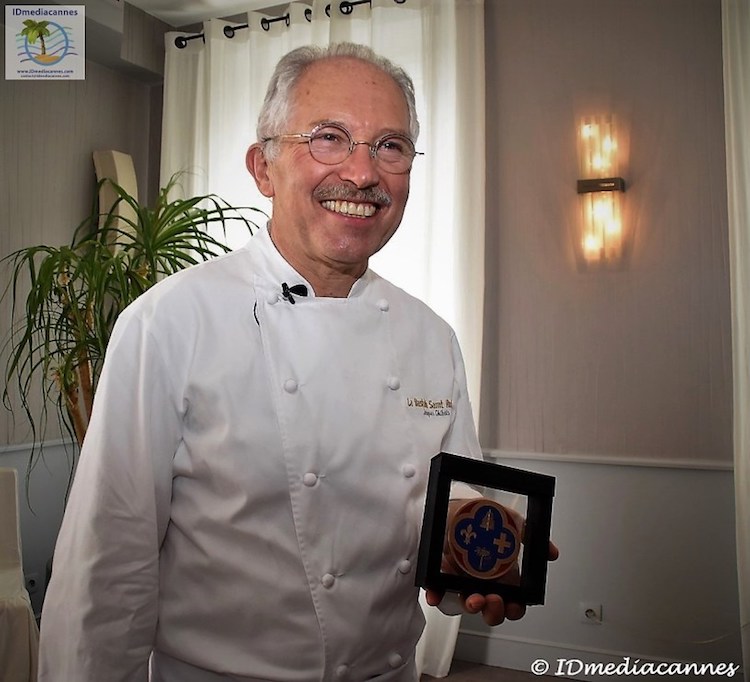 La Bastide St. Antoine may well have a 92% “Excellent” rating on six internet portals but its owner is not one to rest on his laurels. To maintain this remarkable standard and meet the ever changing requirements of hospitality, he recently started putting together a formidable team of promising future hospitality leaders. The kitchen has been placed in the hand of 33 year old executive chef Laurent Barberot whose CV is a compilation of Who’s Who in French cuisine: The gourmet temples of chefs Haeberlin, Ducasse and Loiseau, among others, were his previous stops. Chef patissier Stéphane Mangin’s creations are clearly influenced by his international parcours which took him to Paris, Italy, Abu Dhabi, Dubai, and Tokyo before arriving at La Bastide. Guest relations manager David Bisque, a 2014 finalist of the very prestigious Meilleur Ouvrier de France (MOF) competition honouring the most accomplished professionals in their respective fields is the handsome and competent interface to guests and the public, with poise well beyond his young years. Sales manager Nathalie Zafra, maître d’hôtel Sébastien Rey, and chef sommelier Yoann Vasquez complete the young and dynamic team around Jacques Chibois. “They know how much this place means to me, and I trust them to run it as it deserves to be run. This allows me to concentrate more on strategic questions of ongoing development in these times of constant great changes,” the owner says with a paternal smile. 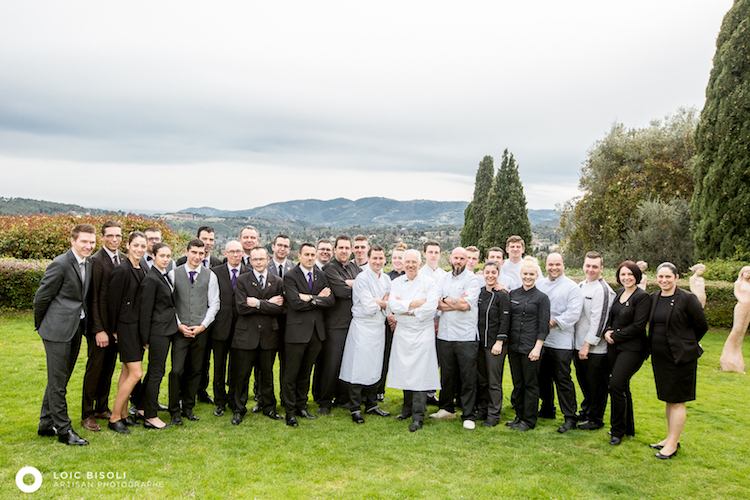 But handing over a portion of the responsibilities does not mean he retreats from the day-to-day, hands-on work. He is still off to the wholesale market in Nice twice a week at 5.30 am, sometimes with hotel guests in tow; he still keeps a keen eye on every operational aspect, and he is still the ultimate authority on all executive decisions. Close to retirement age, he has no thought of slowing down, on the contrary, he has quite a few projects in the wings. His work ethics is rooted in his upbringing in a family deeply rooted in an agricultural environment. “My life philosophy comes straight from Mother Nature. She is our best teacher. Fruit can be beautiful to look at but does not taste good unless it has suffered from the elements. Only a certain amount of hardship as it grows brings out its real value, and the same is true for people. If one has it too easy, he loses all ambition,” he explains. “When I was apprenticing as a cook, I was pushed hard by my teachers. I resented that I had to do things over and over again, the smallest imperfection was sanctioned, but eventually I understood that they did it not because I was bad at what I was doing, but because they wanted me to surpass myself.” And it shows…

If hospitality is considered an art, Jacques Chibois is a great artist. And he is also a philosopher. Not in a professoral or preachy way but with him you can have the kind of conversation you want to have with your father… infused with the wisdom of an experienced person and laced with love, respect, optimism, and a good dose of humour. His is the common sense of country folk. Happiness is found within oneself, is this man’s mantra, and you find it when you work hard and make the best of your abilities. He is one of those people whose happiness is contagious, a happiness also nourished by the joy of doing something that allows him to live his passion and share it with others. To Maître Jacques, “Celebrating the art of living well, that is my life.” And there you have it, the (not so secret) recipe for the next 20 successful years at La Bastide St. Antoine …