A view of the Eiffel Tower from your stove is mandatory when you are a culinary champion in Paris. Le Cordon Bleu finally realized that, too.

Great chefs enjoy rock star status in France, and their students are adoring disciples almost as outerworldly as their masters. But when you teach – or study – at the Cordon Bleu School of Cooking, you’re playing in a league all by yourself, and mere burger-munching mortals are in complete awe of you.

But little did the outside world know how cramped and cluttered the quarters were that you had to make do with until just recently. That has just changed though. Noblesse oblige, and the world’s most prestigious culinary institution gave itself a fine 121st birthday present – a brand new temple for worshipping at Hestia’s altar.

After a lengthy stay in uninspiring and cramped quarters on the not-quite-so-posh side of Paris’ 15th arrondissement, Le Cordon Bleu just opened its glamorous new Paris campus near the Eiffel Tower, overlooking the River Seine and the Statue of Liberty, and is now set to welcome more than 1,000 students every year.

And “glamorous” does not even begin to describe it! The new 4,000m² (44,000 sq.ft) flagship institute is fitted out with ultramodern equipment and boasts the latest technology with particular emphasis on the use of digital systems. Built of aluminium and glass, the building’s design was envisaged with the latest environmental norms in mind enabling it to be eco-friendly. “This new place is a shrine, a place of magic … a Rolls-Royce”, William Caussimon, one of the teaching chefs, raves.

Le Cordon Bleu, the world’s leading network of culinary arts and hotel management institutes, has come a long way from its inception in 1895, when it originally started out as a humble magazine. But very quickly its reputation for excellence spread across the globe, and within a matter of just a few short years, it offered classes and received students all the way from Russia and Japan. A number of celebrity kitchen warriors have slaved over its stoves, not least Julia Childs who enrolled in 1948. The culinary institute wrote a few more chapters in history when in 1953 Le Cordon Bleu London created the Coronation Chicken dish, served to foreign dignitaries at the coronation lunch of Her Majesty Queen Elizabeth II, or when Billy Wilder’s movie “Sabrina”, starring Audrey Hepburn, snuck the school into a Hollywood script the following year.

The chefs and instructors are a parade of blue-white-and-red collared “Meilleurs Ouvriers de France” (the prestigious distinction annually bestowed on the best artisan or craftsman in one’s discipline), who all have worked in the finest gourmet establishments around the world, and the impressive list of alumni also contains some names of the upper echelon of international cuisine. These days, Le Cordon Bleu has 35 franchises in 20 countries around the world, all run to military precision under the watchful eye of the Paris HQ, and a total of 20,000 students from over 90 nations complete the various programmes every year. But while each school needs to adhere to the Parisian flagship’s high standards to the tee when conveying the finesse of French culinary heritage, “just following a recipe is not enough”, as Head Chef Eric Briffard stresses. “Guiding – that’s the DNA of teaching.” 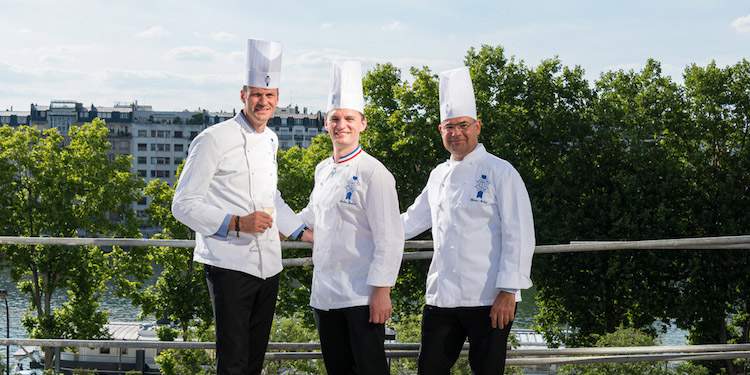 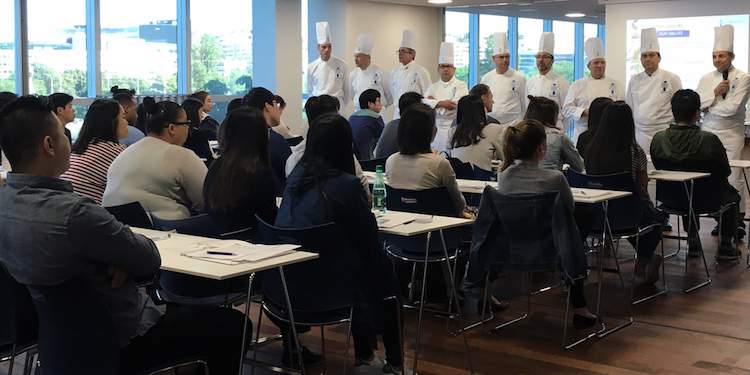 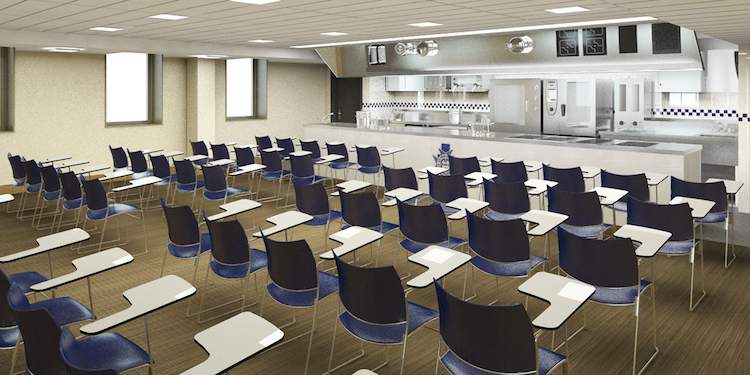 The new Paris building is comprised of seven practical classrooms for cuisine, pastry and boulangerie lessons, each suitable for 32 students at a time, including one classroom especially designed for teaching Asian cuisine. Three demo rooms, a teaching wine cellar and a 420 m² modulable function room complete the teaching area. Beyond that, a dedicated student space with multimedia equipment and a large library with a wide selection of international culinary books and magazines allow students to peruse gastronomic topics outside class. But visitors are welcome – a boutique with a range of products and gourmet gifts and equipment, a workshop dedicated to individual or group lessons for cuisine amateurs, and the Cordon Bleu Café all give students and passers-by the opportunity to try a range of quality goods either on site or at home.

One of the building’s innovations is its roof which has been transformed into a vegetable garden measuring more than 800 m². The garden is energy autonomous: the heat from the kitchen hoods is collected and used to heat the green house, a rainwater tank enables the garden to be watered and a number of composters supply fertilizer. Beehives also provide the school’s honey. The garden allows students to learn about how fruit, vegetables, herbs and edible flowers are grown in an urban setting. It also provides some of the fresh ingredients for cuisine lessons.

Are you rattling your cage, or rather your pots and pans, in anticipation yet? You can sign up for intake several times a year, and upon successful completion of the professional course you have a fair chance at a future entry in the Who’s Who of Culinary Arts. But beyond talent and interest, in order to enroll you better have a cushy bank account: a 9 month master class sets you back by about €50,000 ($56,000). A chunk of change, that’s for sure – but the view of the Eiffel Tower is free! For those with less time and spare change to invest, short term amateur programmes are available, at the Paris campus and internationally.