For the first time assembled and shown in its entirety, the exhibit of the Spanish artist’s 100 etchings at the Malmaison is a cultural highlight not to be missed

The Malmaison Cultural Centre in Cannes has made quite a name for itself as the venue for small but high profile exhibitions, and the current Picasso exhibit, featuring 100 of his etchings, is no exception. Seen for the first time in its entirety, La Suite Vollard is a carefully curated testimony of a period the artist’s life during which he develops from bon vivant to a man tormented by the forebodings of war and domestic strife. The Suite’s tumultuous history adds another remarkable element to the exhibit.

Commissioned by Parisian art dealer Ambroise Vollard and created between 1930 and 1937, the neoclassical etchings constitute a corner stone of Picasso’s body of work. Vollard’s untimely death in a car accident in 1939 and the outbreak of the Second World War stopped its original planned release into the art market, and the series finally only appeared in the 1950s. While on exhibit in Madrid in 1971, the Suite was partially torn up and sprayed with acid by a paramilitary group to protest Picasso’s support of the Republican side in the Spanish Civil War.

Over the years, leading art museums around the world acquired complete sets of the collection, among them the British Museum, Kunstmuseum Pablo Picasso Münster, Modern Art Museum of Fort Worth, the National Gallery of Australia, the National Gallery of Canada, and the Philadelphia Museum of Art. Still, this is the first time that the integral collection of all 100 etchings is on show. The Suite on display in Cannes is an initiative of the Musée national Picasso-Paris as part of a two year “Picasso Mediterranée” programme from 2017 to 2019.

La Suite Vollard comprises six cycles, largely revolving around his lover and muse Marie-Thérèse Walter: Libres (Freedom), Le Viol (The Rape, aka The Battle of Love), Rembrandt, The Artist’s studio, Minotaur, and Le Minotaur Aveugle (The Blind Minotaur). A portrait of Ambroise Vollard himself completes the display. Some of the themes are supposedly inspired by Honoré de Balzac’s short story Le Chef-d’œuvre inconnu (The Unknown Masterpiece, 1831). Famous British art historian Richard Dorment opines that as Picasso took such a long time to create the Suite, “the imagery and the emotional register of the prints constantly shifts to reflect Picasso’s erotic and artistic obsessions, marital vicissitudes, and the darkening political situation in Europe…In the years Picasso worked on the series, fascism spread through Europe, and civil war erupted in Spain. These anxieties also found their way into the Vollard Suite, so that by the time you reach the end of the show and the last images of the blind minotaur, you feel that you are in a different emotional universe from the sunlit arcadia you encountered at the show’s beginning.” 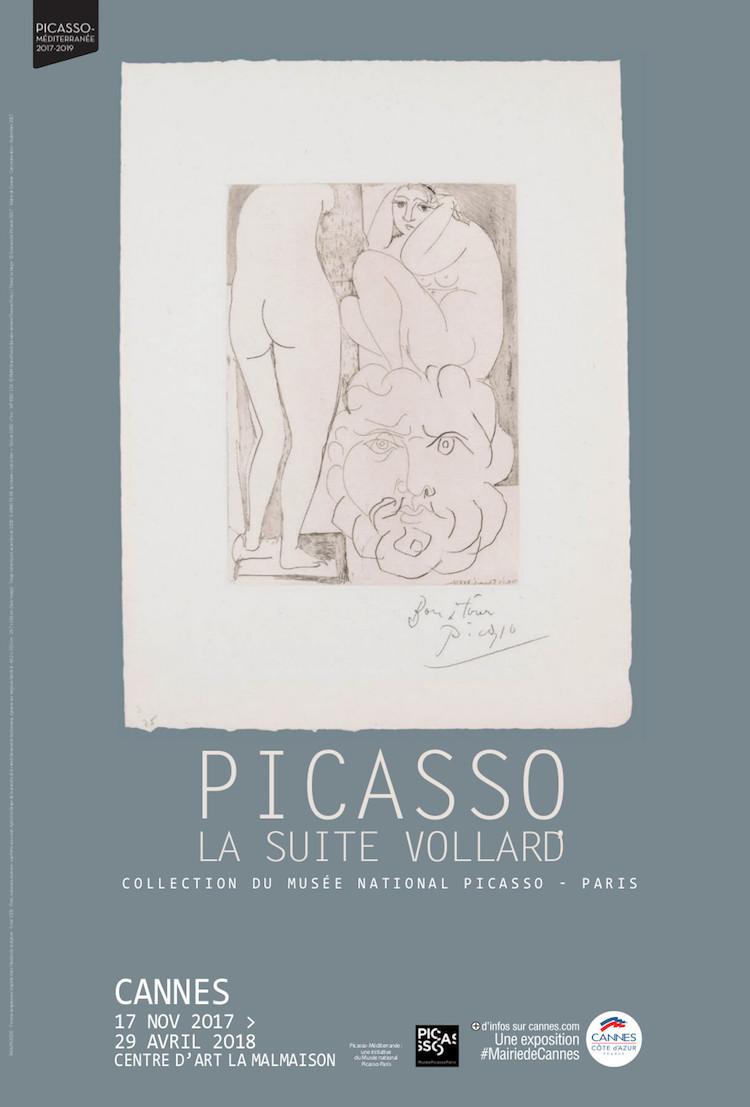 During his lifetime the Spanish artist spent much time on the French Riviera, including during the 1930s while he was working on La Suite Vollard. Mayor David Lisnard is therefore always delighted about the opportunity to showcase Picasso’s work. “As well as being of exceptional quality, this collection is also exceptionally rare, and we can be proud to be able to contemplate it here in Cannes. The Suite Vollard is a trailblazer in the world of modern art.”

Since its opening in November, the exhibit under the direction of Frédéric Ballestre has already drawn large crowds and reaped much praise. It runs through 29th April, 2018, open daily from 10h to 13h and 14h to 18h, closed on Mondays.

A picture lives only through the one who looks at it. — Pablo Picasso