The month of June heralds the start of Monte-Carlo’s annual Summer of Dance, an exciting combination of world premieres and well-loved works.

The latest edition of the Monte-Carlo Summer of Dance boasts a most impressive programme, featuring the students of the Princess Grace Academy, the latest collaboration by Robert Wilson and Mikhail Baryshnikov, two world premieres – by Jeroen Verbruggen and Vladimir Varnava – and Jean-Christophe Maillot’s fabulous production of Romeo et Juliette.

The season opens with the annual Gala presented by the Princess Grace Academy, a celebration of the achievements of the dancers and their teachers during the past year. It’s a varied programme of four works, opening with a triptyche of pieces, set to three of Eric Satie’s gorgeous and introspective Gnossiennes, and created by three choreographers – dancers and/or former dancers of Les Ballets de Monte-Carlo. Julien Guérin takes Gnossienne No 1, Bruno Roque Gnossienne No 3, and Jeroen Verbruggen Gnossienne No 4. 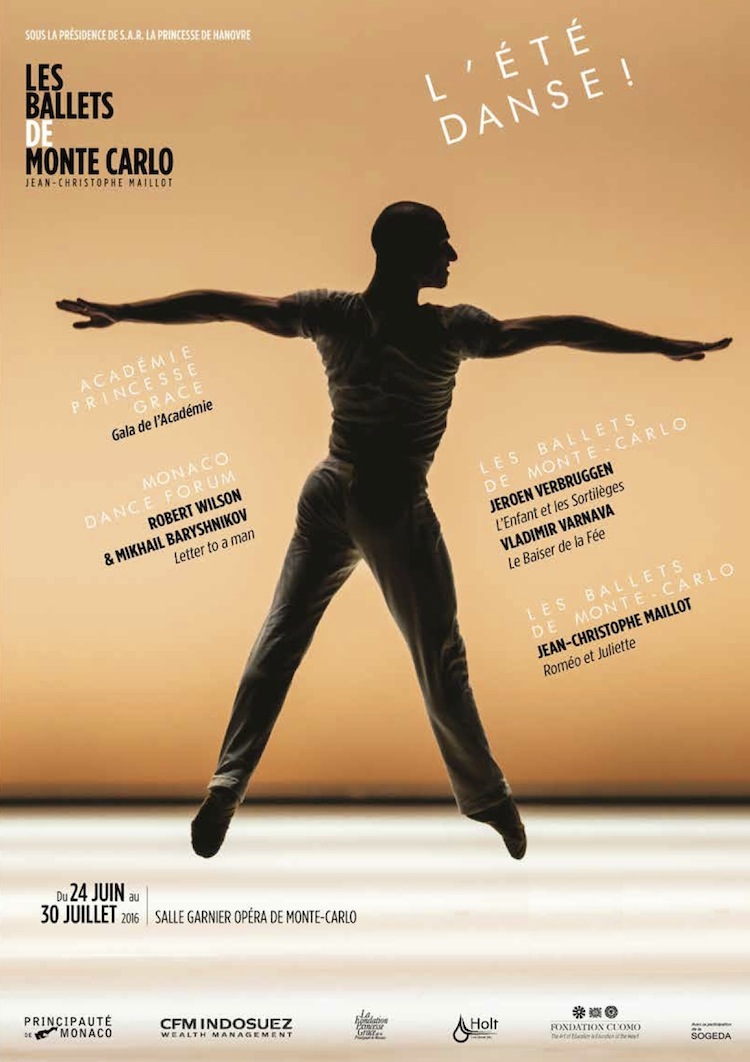 Un Ballo, Jiří Kylián’s first choreographic creation for Nederlands Dans Theater II, is based on two lovely compositions by Ravel – Le Menuet du Tombeau de Couperin and the Pavane pour une Infante Défunte, which Kylian describes it as “quite simply a dance made for music, to be approached as an exercise in musicality and the sensitive dialogue engaged between the male partner and the female partner”.

This is followed by In-Bilico, a work by Eugenio Buratti  which he choreographed for the Academy two years ago, and in which he – intriguingly – explores the “ability to achieve balance despite instability” – hence the title which translates as ‘poised’. In-Bilico is set to the music of Alva Noto – one of the names by which German composer Carsten Nicolai is known – and who, with Ryuichi Sakamoto, composed the score for the 2015 multi-award-winning film The Revenant.

The performance ends with three spirited tarantellas – the traditional folk dance which has it origins in southern Italy. Included in this trio of sparkling performances is Balanchine’s challenging but spectacular pas de deux to Louis Moreau Gottschalk’s wonderfully tuneful Grande Tarantelle. A grand finale indeed!

Mikhail Baryshnikov, widely acknowledged as the greatest dancer of his generation, has teamed up with American avant-garde director Robert Wilson in their third collaboration, Letter to a Man, a theatrical production based on autobiographical texts by Vaslav Nijinsky, which he wrote in 1919, documenting the desperate internal battle he endured against his deteriorating mental state.

In this powerful presentation for Monaco Dance Forum, which premiered at the Spoleto Festival in 2015, Baryshnikov enters the mind of Nijinsky in his struggle to communicate during his descent into schizophrenia. The content of these diaries was described by American writer Henry Miller “… a communication so naked, so desperate, that it breaks the mold. We are face to face with reality, and it is almost unbearable … had he not gone to the asylum we would have had in Nijinsky a writer equal to the dancer.”

Letter to a Man runs as part of the Monte-Carlo Summer of Dance season at the Salle Garnier, Opéra de Monte-Carlo, from 30th June to 3rd July.

The first of the summer productions by the dancers of the Monte-Carlo Ballet features the recreation of two works which were originally written during the 1920’s – Ravel’s opera L’enfant et les sortilèges: Fantaisie lyrique en deux parties, and Stravinsky’s ballet Le baiser de la fée.

Belgian dancer Jeroen Verbruggen – a former member of the Monte-Carlo Ballet, and now choreographing full time – presents his version of Ravel’s L’enfant et les sortilèges (The Child and the Spells: A Lyric Fantasy in Two Parts) which the composer wrote to a libretto by French novelist Colette. Part of the repertoire of the Ballets Russes, it was premiered on 21st March 1925 at the Opéra de Monte-Carlo, with the ballet sequences choreographed by George Balanchine.

The story – originally written by Colette for her daughter – tells of a mischievous child who takes out his anger on his possessions and his stuffed toys – but the toys come to life to teach him a lesson, and peace is ultimately restored. In Verbruggen’s interpretation, the action of the ballet takes place inside a house in which the child creates havoc and in a garden which he destroys. With the underlying concept of the house being the child himself, the things he destroys and the creatures he harms are all acts which he inflicts on himself. Although this creates an atmosphere of uneasiness, there are also flashes of humor in the work, representing Verbruggen’s natural wit.

Vladimir Varnava created his version of Le Baiser de la Fée especially for the Monte Carlo Ballet at the invitation of Jean-Christophe Maillot when they met in St Petersburg in 2015. An accomplished dancer and choreographer, Varnava has twice won a Golden Mask award from the Russian National Theatre. In 2010 he became the youngest winner in the history of the competition for his performance as Mercutio in Romeo and Juliet, and in 2014 he received the award for The Passenger, which he choreographed, for which he wrote the libretto and in which he performed.

Le baiser de la Fée was a one-act ballet composed by Stravinsky in 1928 and choreographed by Bronislava Nijinska (sister of Vaslav Nijinksy). Commissioned by Ida Rubinstein, it was based on the Hans Christian Andersen story The Ice Maiden, in homage to Tchaikovsky on the 35th anniversary of his death. In 1950 it was revised by Balanchine for New York City Ballet, in 1960 Kenneth MacMillan choreographed his own version for The Royal Ballet, and John Neumeier and Maurice Béjart have also created their own interpretations.

Varnava has a very contemporary approach to choreography, reworking classical scores and librettos to create a present-day feel to them, and experimenting with abstraction to express his vision. 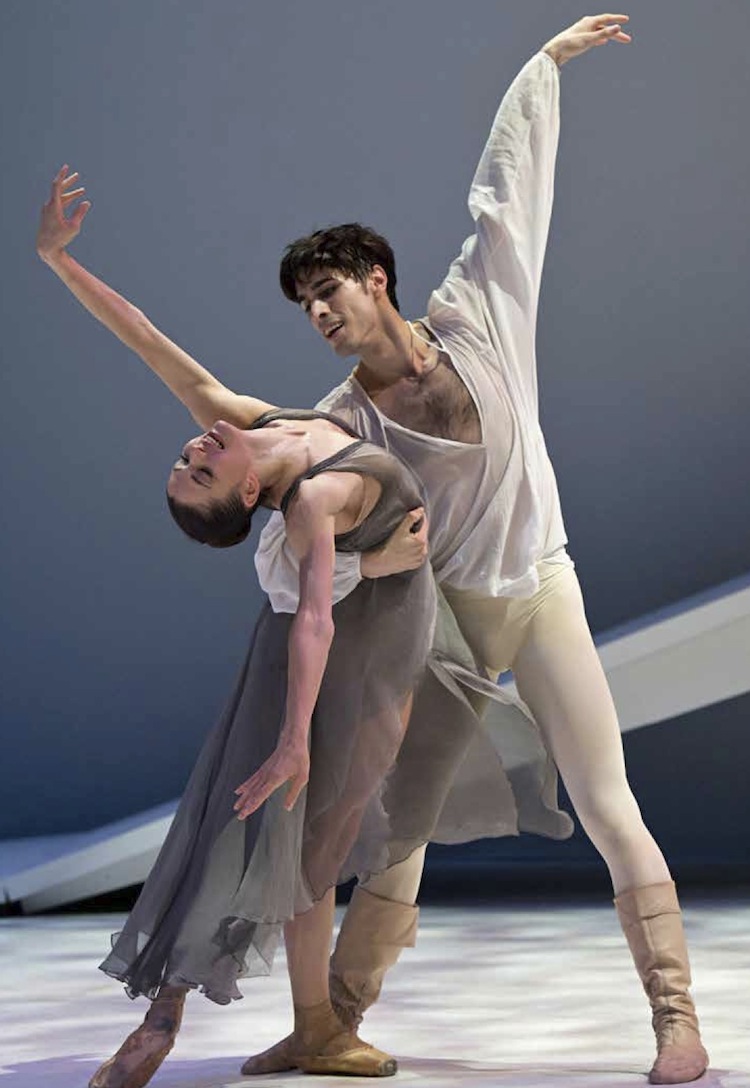 The finale of Monte-Carlo Ballet’s summer season is devoted to Jean-Christophe Maillot’s dramatic interpretation of Romeo et Juliette. Setting his ballet to Prokofiev’s sumptuous score, Maillot takes a different perspective from other choreographers for his presentation of Shakespeare’s masterpiece. Instead of using the feud between the Montagues and Capulets as the provocation for the deaths of the young lovers, Maillot gazes into the soul of Friar Lawrence whose good intentions are ultimately the cause of their tragic end.

Through a series of flashbacks, Friar Lawrence reflects on his part in the series of accidental tragedies which led to the death of two young people whose inspiration was based purely on love, yet whose death was the result of so much hatred.

Romeo et Juliette will be presented as part of the Monte-Carlo Summer of Dance season at the Salle Garnier, Opéra de Monte-Carlo, from 28th to 30th July.