Every year right around this time, a plethora of books hits the market, vying for a spot under the Christmas tree. Many of them are quite simply forgettable. Every once in a while though, one is among them that does merit a closer look. One of those gems this year is “Mes Silences du Maghreb”, a collection of poetry and photography, in which its author Sarasvati Devi beautifully captures the magic of Northern Africa. She zooms in on the small wonders of daily life hidden from prying eyes, and she marvels at the sense of calm that only silence can bring.

The island of Djerba at the southern tip of Tunisia is home to Sarasvati but it is only one of the pearls in a long chain of places she has lived in. Those who live a more traditional life might question what a perpetual nomad knows about silence. A lot, in fact. The strength drawn from silence is what powers movement, and movement in turn makes one appreciate silence as the source of peace and nourishment for the soul. This becomes evident in Sarasvati’s poems, beautifully illustrated with matching photos. 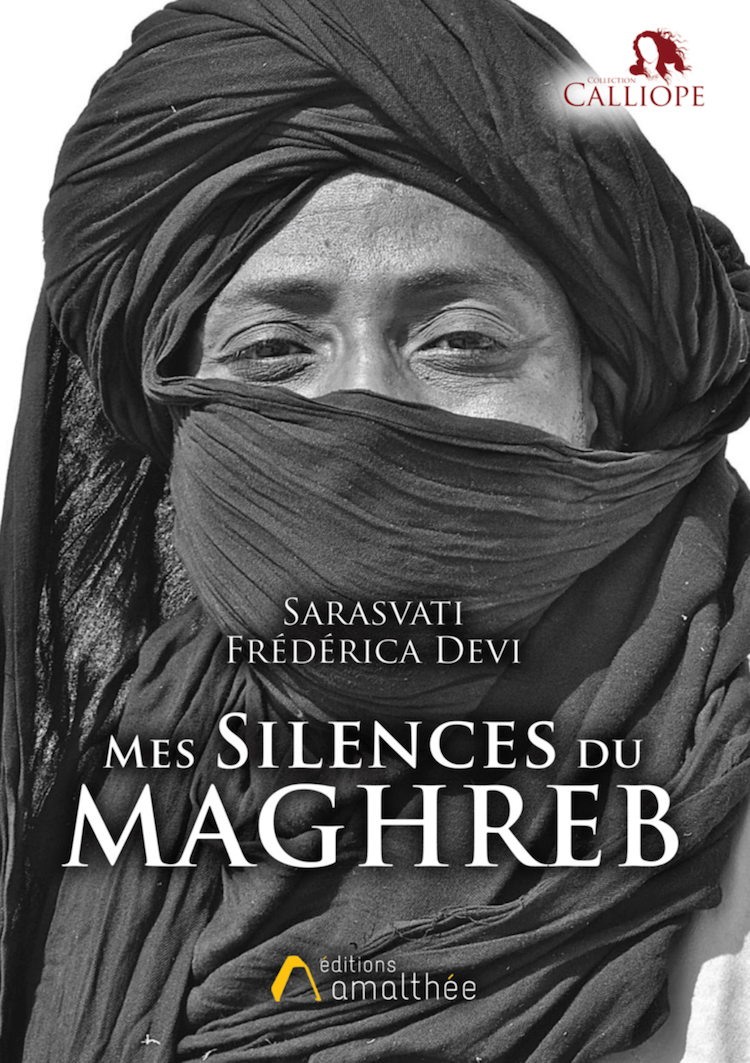 Sarasvati’s silence is not a heavy one, born from loneliness or ennui, but one that in itself talks, triggers memories, and evokes daydreams. A half-hidden alleyway, the sun’s reflection in a colorful glass, the dignity of a face wrinkled by age and toil… they all are motionless and quiet, and yet, all tell endless stories. Sarasvati has a finely honed intuition for the magic of a moment, an extraordinary eye for photographic composition, and an acute ear for the musicality of words. Her silence is vibrant and life-affirming.

Silence is the twin art of listening. Sarasvati’s book “Mes Silences du Maghreb” comes with a foreword by Dr. Khaled Youssef, renowned surgeon, humanitarian, artist, and avid traveler. He captures the essence of her writing best: “There is eloquent silence that becomes a language of its own when verbal expression reaches its limits, and there is inspiring silence that allows the mind the freedom to dive as deep inside ourselves as possible and take a benign and peaceful look at the world around us. There is the silence of respect, that of contemplation, and the one which embodies a refuge, a shelter, when the world becomes constant noise.”

“To discover the soul of a country, or any place, means becoming one with its soil, its nuances, and the silence behind the sounds. It means letting your mind experience it by allowing your heart to speak because “the primary identity of a poet is human,” as writer Nada Skaff says. To truly inhabit and understand it means penetrating it through encounters, and asking questions beyond words. Only once a collection of impressions, memories, and emotions crystallize into an image, it will appeal to our sensitivity.”

To understand the spirit of this book means understanding its author. But describing Sarasvati Devi is not easy. She is one of those people who reinvent themselves over and over, changing countries, circumstances and professional direction with an insouciance that would leave most people disconcerted.

Born and raised in France, and having spent many years abroad (in Germany, India, and now Tunisia) she has become the embodiment of a world citizen. A teacher of French and yoga by profession, and an Indian sacred dance dancer, photographer and poet by passion.

She has been writing since childhood, inspired by her grandmothers, one an author and historian, the other a teacher and musician. Her father introduced her to photography. Her photographic works have been featured in international exhibitions, including at the Palais de la Culture in Algiers, at ENA Paris and Nancy, during international festivals in Tunisia, and in German and French universities. In 2018 two of her poems, both included in the book, received awards at the Tozeur International Poetry Festival. She also performs frequently for charitable causes, notably for the cultural, social and educational progress of orphaned children in the Tozeur region. 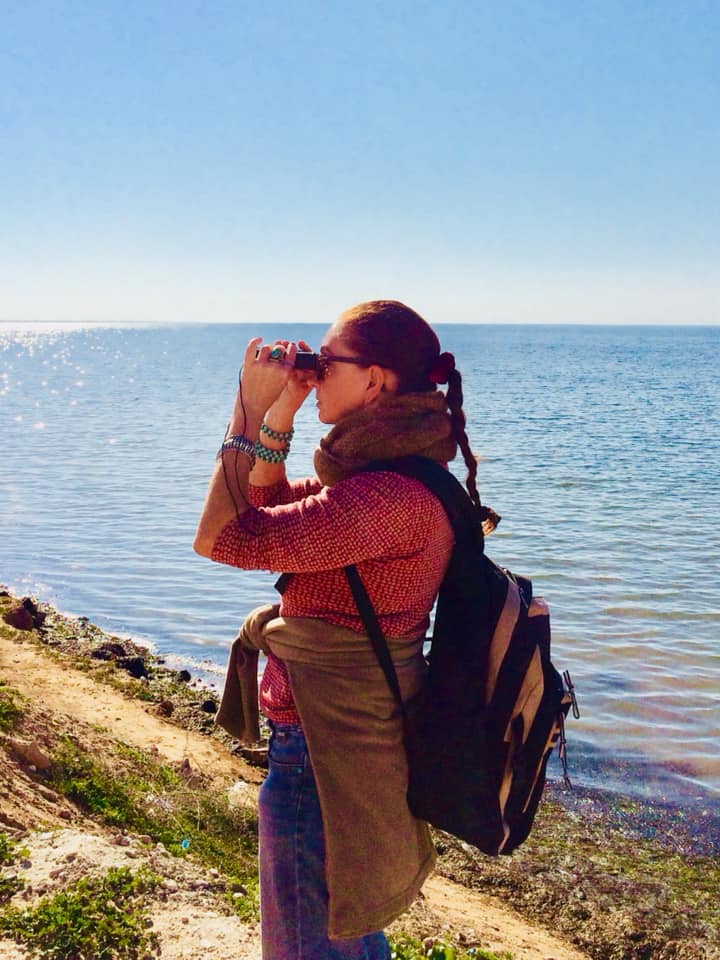 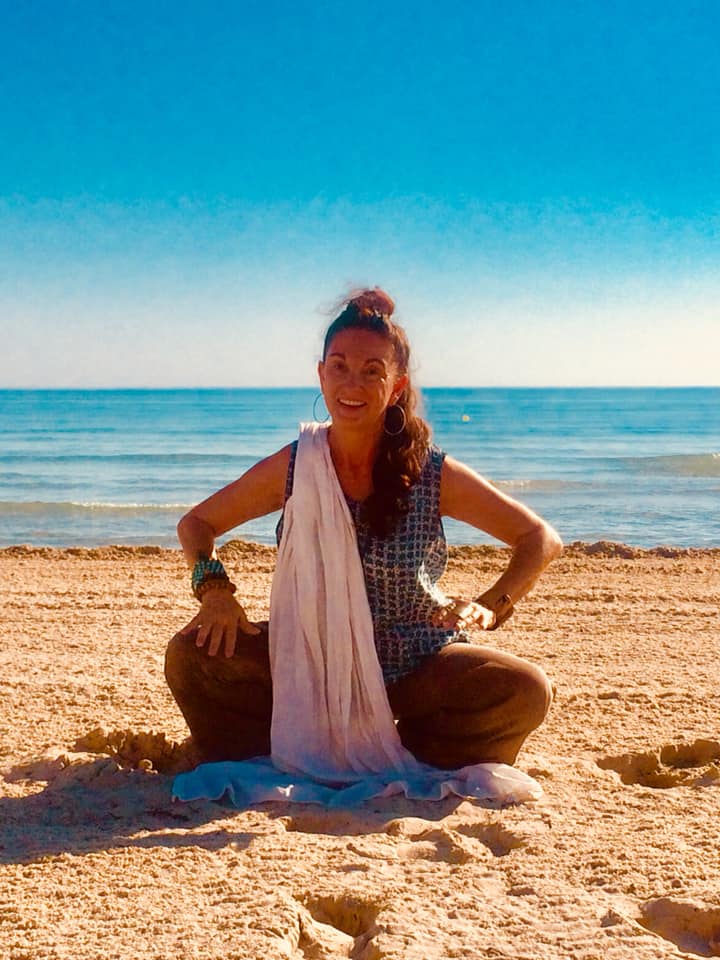 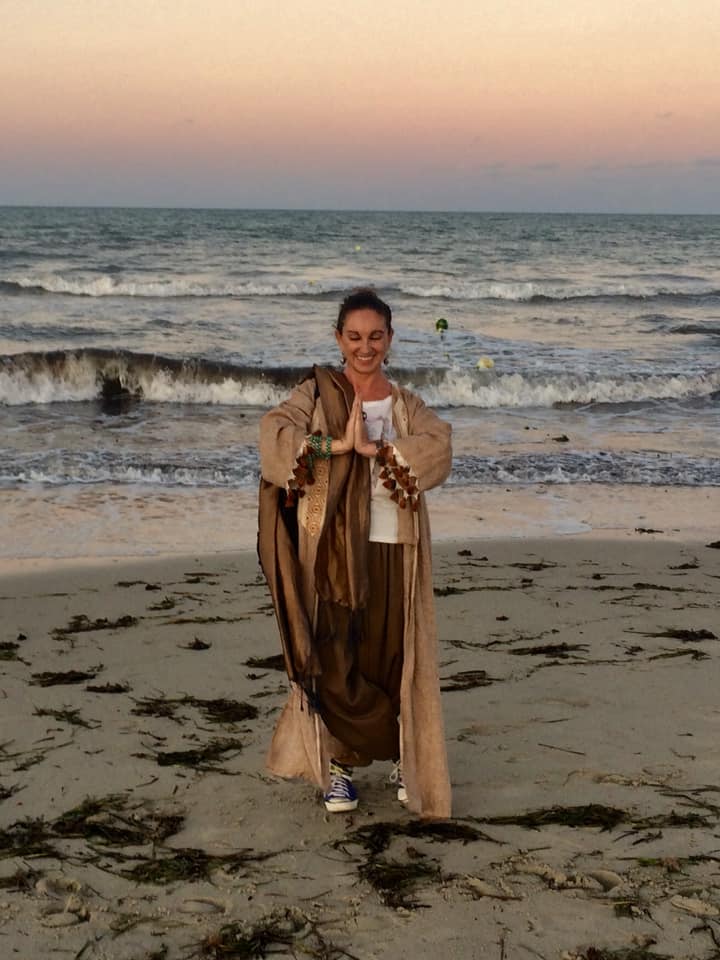 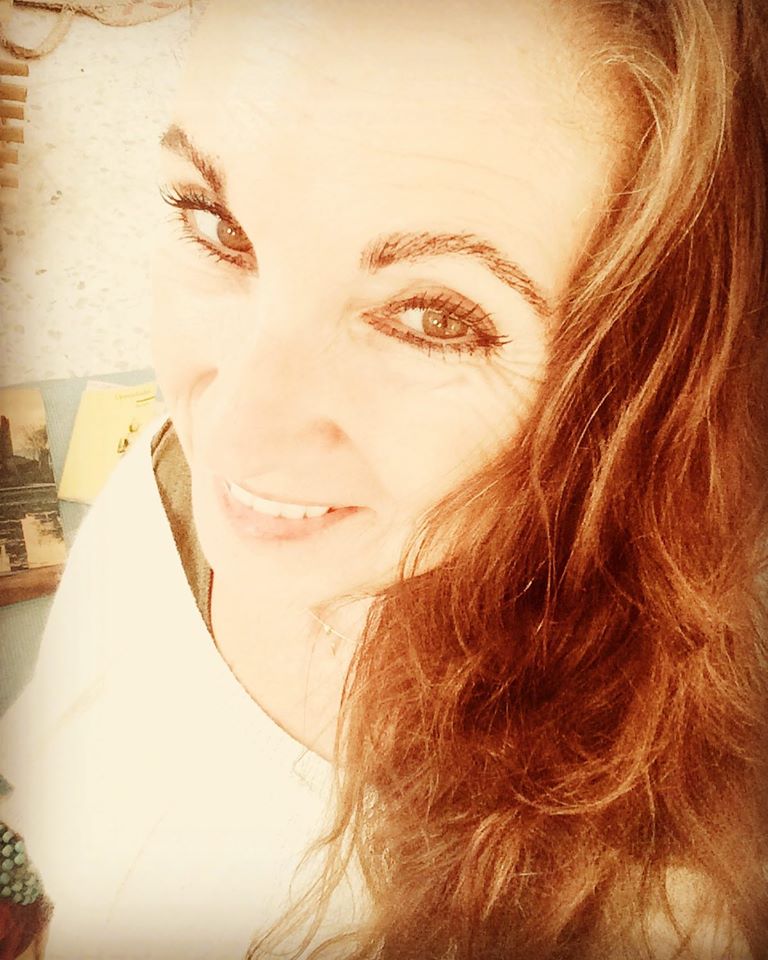 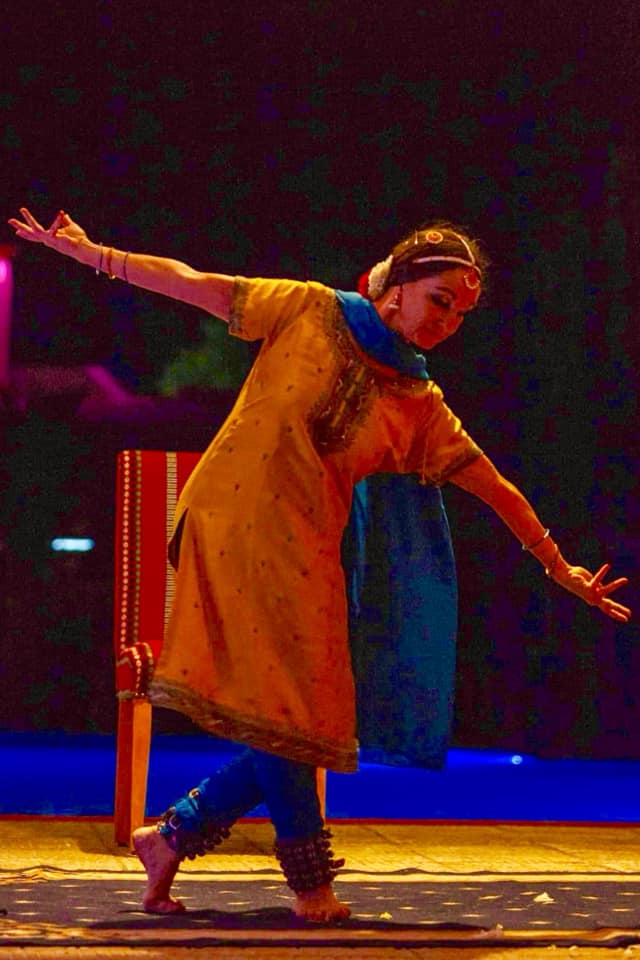 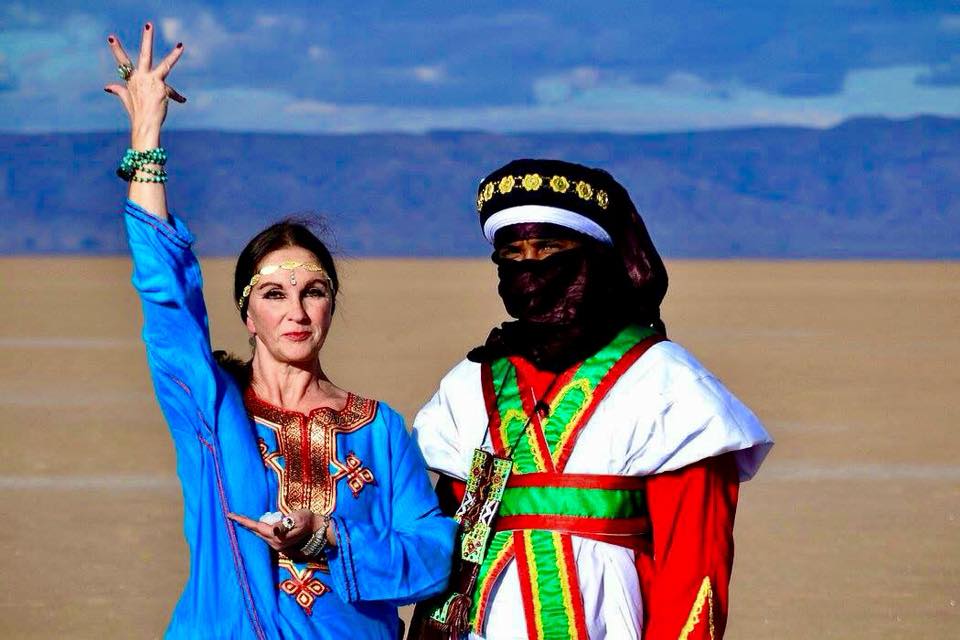 What is truly interesting in her biography is the striking contrast between her love for Germany, the Indian culture she is attracted to, and Tunisia where she currently lives. Three very different and contrasting societies. Is there a backstory to that, we want to know?

Of course there is, and it goes way back to her origins. “I started yoga on my fifth birthday,” Sarasvati – whose birthname is Frédérica – remembers. “As a teenager I started studying philosophy, reading the Mahabarata, the Bhagavad Gita, the Upanishads, and Sufi and Rosicrucian texts – my maternal grandmother was a historian writer specializing in the Celtic culture of southern Burgundy, a lover of Druid spirituality, and a Rosicrucian herself – and I felt comfortable with it.”

At age 21, she trades her native France for Germany, a culture that better suits her thirst for freedom, independence, individuality, and worldly outlook. She establishes an existence between a pragmatic daytime job as a French teacher and translator, and a bohemian lifestyle around travel, music, dance, and yoga. 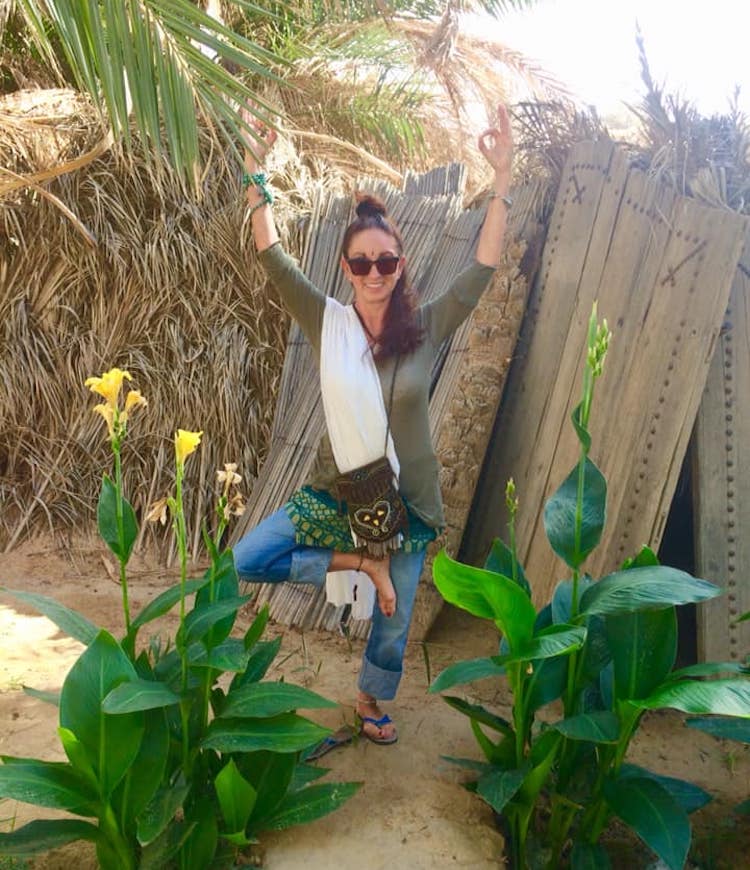 In 2002, a car accident in which she is gravely injured and her fiancé is killed becomes a major turning point in her life. “Yoga and Eastern philosophy proved therapeutic and helped me rebound by answering all the questions I had, nurturing me into becoming a new person, and stabilizing my life while making me understand it, with its joys and sorrows.” She also learns that there is no such thing as “being a victim” and that she can create whoever she wants to be.

During several long stays in Northern India and at the Sivananda ashram she studies yoga and dance under Swami and Masters of Indian classical dance from the Kalashetra Academy. “I feel very much in sync with Indian and Hindu culture which is playful, poetic, and very colourful!” And slowly, Frédérica transforms into Sarasvati (the goddess of arts and communication, knowledge and wisdom) Devi (meaning “goddess” in Sanskrit), two names bestowed on her by her teachers, and linked to reinforce their strengths.

Going back and forth between Germany and India, she also turns to writing again, an art which had played an important part in her life since her childhood. A voracious reader, she is inspired by authors as diverse as Erich Fried, Tucholsky, Prévert , Rimbaud, Abulkacem Chebbi, Hermann Hesse, Tahar Ben Jelloun, Roger Frison-Roche, Eric Emmanuel Schmitt, Shakespeare, Goethe, and Saint-Exupery. “They all hold up a mirror to me, they are my answers and ideals come to life, and they talk to me as I would like to be talked to or as sometimes I want to scream a truth, which is why I love them.”

She particularly loves poetry which for her is the manifestation of the world as she sees it. “It is much lighter than prose and it allows strong introspection and therefore deep assimilation.” For her, “poetry is a form of therapy and a way to confess that which I wouldn’t say otherwise for fear of hurting or being hurt.” And poetry is also easier to translate into dance, allowing her to link these two forms of artistic expression.

But just when we think that the kaleidoscope of this multifaceted personality and artist slowly comes into focus and makes sense, she surprises us again.

Earlier this decade, the Western world was becoming too cold, impersonal, and controlled for her liking, she lost her inspiration and her joy of living. “I got sick more often, felt isolated. People are caught up in their routine and fears, helping each other less and less, and losing balance,” she shares.

So she listened to her intuition which pointed her to Djerba, where she has been living for two years now. “Here, we share, we laugh more, we listen and generally try to better understand our differences, learn to love them, and put them into perspective. Here, the light carries me, it inspires me a lot… just like the abundance of colours everywhere, they make me smile in the morning.” She finds more poetry in her daily life, she feels safe. And perhaps, she thinks, it’s karma that brought her here, convinced that she had already lived in Tunisia as a Sufi poet or musician in another life… 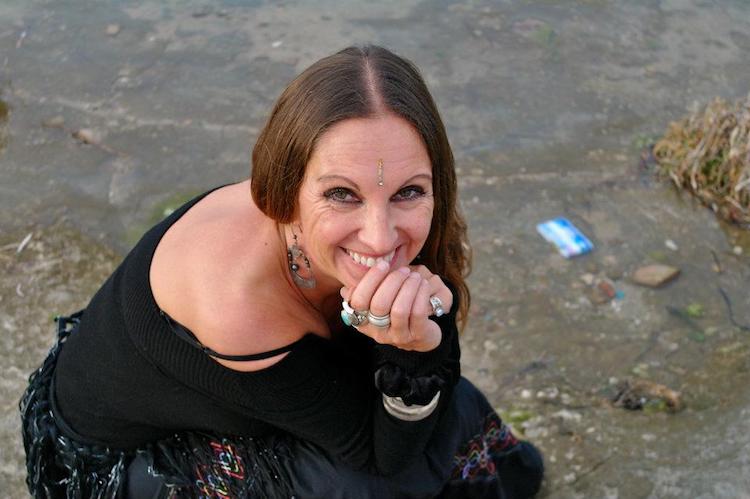 But is Tunisia where she sees herself in the long run? Who knows – she sure doesn’t. Rather than stake out her path minutely, she lets herself be blown by the wind. In an ideal world she would live somewhere between Germany, Malta, and a beautiful spot somewhere in the Maghreb, near the sea, and surrounded by her turtles and cats. She may be a French citizen and write in her mother tongue but it is abundantly clear that square and regulated France is not the country for a free spirit like her.

With all this life experience flowing into the author’s pen, “Mes Silences du Maghreb” is a book truly written from the heart, allowing us to see Sarasvati’s world through her eyes. A wonderful oeuvre full of humanity, beauty and wisdom that rightfully deserves a place on the bookshelf of anyone who has preserved the capacity to dream, to listen, and to be silent.

Today’s world needs poetry and dreams like never before, an awareness of the beauty of the verb, the depth and value of the word. It should be taught more, and differently. Why not post poems in the subway corridors, at bus stops or on garbage cans? I’m sure many smiles would appear on the faces of passers-by and as we all know, the smile is the shortest line from one heart to another… Poets are magicians.