If you have ever bought vintage postcards of the French Riviera, chances are that you have come across the name of Jean Gilletta.

Jean Gilletta, a self-educated photographer, is indeed nothing short of an institution in the region, having travelled extensively throughout the south east of France – often on a tricycle – to take over 10,000 iconic shots of its landscapes, architecture and subjects from the end of the Second Empire to the 1930’s.

As his great niece Jeanine writes in the presentation of the photo exhibition that is currently being held at the Musée Massena in Nice, “Not a single element of the landscapes escapes his viewfinder: from rural life in the hinterland to the narrow streets of Nice and Menton, he trains his lens on thousand-year old olive trees and breathes in the scent of flowers used in perfumery (…)”

The exhibit contains no less than 230 images depicting a carefree time on the Côte d’Azur, divided into five main themes: Nice, the resort capital of France, Nissa la Bella, By the Mountains and the Valley, Under the Azure Along the Coast and the News in Pictures. Visitors can admire elegantly dressed men and women sitting at the terrace of the Café de Paris in Monaco as well as women doing their laundry in Nice, witness the construction work on the Paillon as well as Presidential visits, or the aftermath of the 1887 earthquake, and discover a panoramic view of Nice’s Albert Jardin Albert 1er with the now long-gone floating casino, as well as the famous restaurant La Réserve and its ship edifice.

The photographs may be small but to help appreciate all the details, life-size impressions of the works are also projected on the walls. A large box camera that was used by Gilletta is also on display, as well as his three-wheeled motorized bike, and many postcards. The native of Levens was not just a photographer and a witness of his times, he also established what is one of France’s oldest publishing houses, the Editions Gilletta in 1880, and today some of his pictures are housed in the French National Archives, while the publishing house now belongs to the Nice Matin press group. 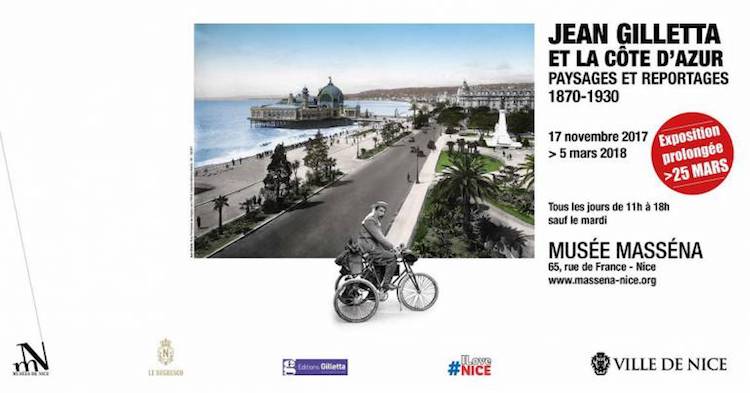 The Exhibition ”Jean Gilletta et la Côte d’Azur Paysages et Reportages 1870-1930” runs until 25th March, 2018 at the Musée Masséna. Museum is open every day from 11am to 6pm except Thursdays. Admission costs €6 (free for residents of Nice).