Every July, all the town’s a stage, a big bustling one, when some 9,000 actors congregate in Avignon to celebrate their art.

Avignon is one of most famous French cities the world over. Kindergarten kids are taught that the thing to do Sur Le Pont d’Avignon is to dance. History buffs have it down as the papal residence following the 1309 schism. And theater lovers have a standing rendezvous with the beautiful Southern town every July when the annual festival attracts hundreds of thousands of visitors to see what’s new, exciting, trending, and great on stage.

It all started quite by accident back in 1947 when famous French actor and director Jean Vilar was invited to present his first great successful play – Murder in the Cathedral by T.S. Eliot in the Popes Palace. At the same moment and at the same place, an exhibition of contemporary paintings and sculptures was organised by Christian Zervos, an art critic and collector, and by René Char, the poet.

Vilar initially refused the invitation as for him the Cour d’Honneur of the Popes Palace was too vast and “shapeless”. Having also just lost the performance rights of the Eliot play, he proposed three creations instead: Shakespeare’s Richard II, one of the Bard’s plays that was little known at the time in France; Paul Claudel’s Tobie et Sara, and Maurice Clavel’s La Terrasse de Midi, all presented in the form of a festival as a showcase for unknown work and modern scripts, and linking to the ongoing exhibits at the Palace. 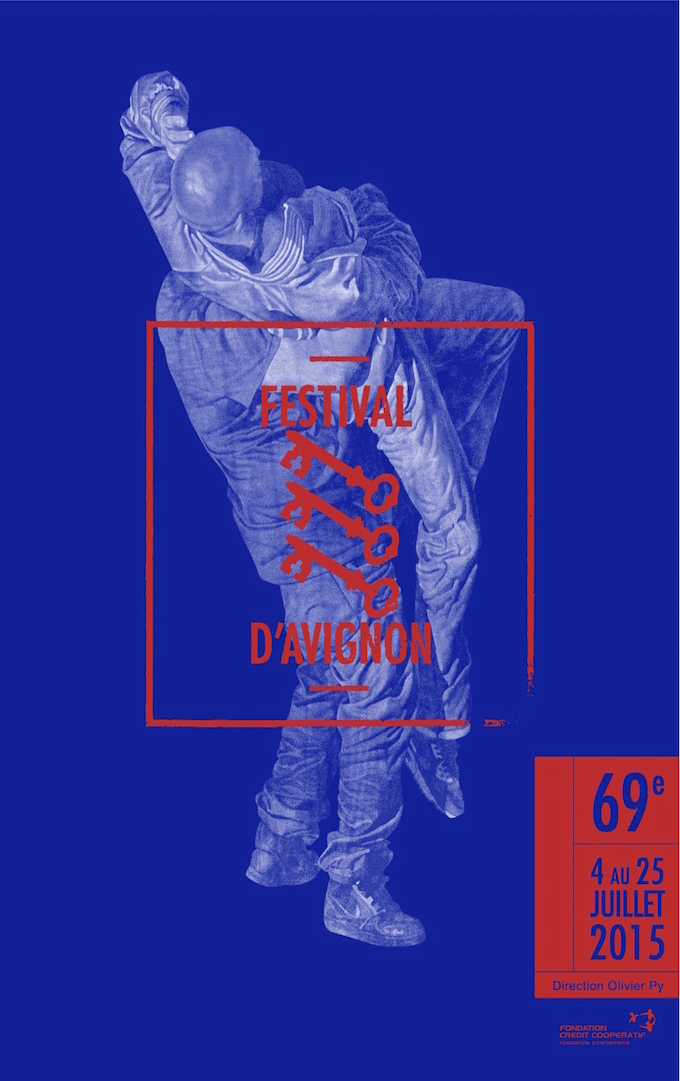 In those almost seven decades since its première, the Festival d’Avignon has come a long way. What started out as a weeklong happening with a handful of shows is now almost a month of theatrical extravaganza featuring well over a thousand companies and plays, accompanied by films, exhibits, readings, and talks. Realizing its ever-increasing popularity as early as 1965, the organizers split it up into two parallel events. Two radically different events, they showcase the entire spectrum of French theatre from “official, selective, government-subsidized culture à la française” at the IN festival to the “whatever individual creative spirit moves you, go and experiment” frenzy at the OFF. Some numbers put the sheer immensity into context: over the the annual three to four week run, well over 1,000 productions – spread out across 20 indoor and outdoor locations all across town – attract crowds of an estimated 170,000 visitors… almost twice the town’s population of 90,000.

Sadly, even so prestigious an event as the Festival d’Avignon didn’t escape the government’s recent drastic cultural budget cuts, and so the 2015 edition from July 4 through 26 is what organizer Olivier Py calls an “abridged version”. And yet, both the IN and the OFF programs are astoundingly rich in quality, novelty, and creativity…. a caleidoscope of the best work that today’s French and international stages have to offer. But not just theater – also music, opera, and dance.

Under the Charlie-inspired motto “Je Suis L’Autre” (I Am The Other) the genteel IN hosts 47 shows, based on several key themes: contemporary authors; classics (with almost-homeboy Shakespeare at their gravitational center); an artistic bridge to the Southern Mediterranean and Arab cultures; young audiences; and new authors….. sending a subtle socio-political message “to decentralize beyond a three kilometer radius” in a part of France where the Extreme Right has a strong presence and follower base. The festival’s declared objective to create greater parity between male and female actors and autors has not been accomplished this year, men still dominate the program by far, but the two highest-profile performers at the IN are international acting superstars Isabelle Huppert and Fanny Ardant. 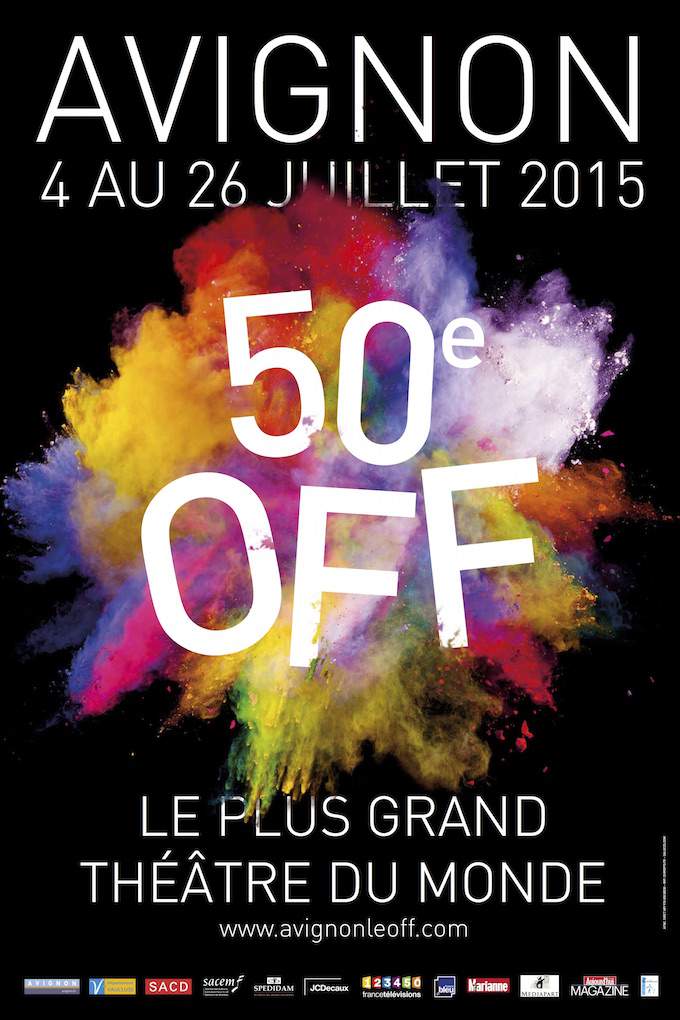 But the REAL “in” place to be is at the OFF Avignon. No big names there, but rather unbridled experimental spirit. Even sizewise, it is another dimension altogether, and to celebrate its 50th anniversary this year, it pulls out all the stops: Nearly 8,000 theater professionals, representing 1,083 companies from over 25 countries, put on more than 1,300 shows. This is the place where “anything goes”. There is no official theme. All genres, all types of performing arts are welcome. Many of the shows are specifically created for the festival, or premiere in France on this occasion, as this is also the biggest buyers’ market where programmers from all around the world are scouting for new talent, fresh ideas, or the next big hit. Participating in the OFF is a costly affair for the companies – in contrast to subsidized IN productions, OFF companies are presented with a tab running up to €20,000, and since theater companies rarely count among the country’s top earners, many depend on crowd-funding campaigns to make it to the pretty town on the banks of the Rhône.

As every year, the French Riviera is represented by a passel of its finest companies and some noteworthy newcomers:

From July 4-26, Paulo Correia and Gaële Boghossian’s Collectif 8 presents Alice at the Théâtre du Chêne Noir. Loosely based on Lewis Carroll’s Alice in Wonderland and its sequel Through the Looking Glass, this 2014 co-production with the Théâtre anthéa in Antibes earns the leading Niçois theater company standing ovations wherever it performs. True to C8’s signature style, diffusing the boundaries between theater and cinema through videography, eponymous Alice is a seven year old girl embarking on a journey of self-discovery, facing several crossroads, to eventually arrive on the throne of the Red Queen. (* check for exact dates and off days!)

Isabelle Servol’s Théâtre de Lumière taps into French heritage with its new creation Cabaret Lautrec at the Théâtre de Cabestan from July 6-26. Under the musical direction of Alain Joutard, this delightful musical cabaret revives the haydays of the Montmartre, telling the story of painter Henri Toulouse-Lautrec’s life between the boisterous world of cancan at the Moulin Rouge and his chance encounters with people in the streets of Paris.

Some other of the 10+ Rivieran companies to grace the planks that mean the world at the Avignon festival include:

Collectif Main d’oeuvre features King Lear Fragments, a tongue-in-cheek adaptation of the Shakespeare play, which got a warm welcome at the Théâtre National de Nice during the recent ShakeNice festival.

It’s off to the OFF for our local and regional Thespians from 4th July through 26th, a month that will be no less exciting for them than it is for the visitors from every nook and cranny of the planet. Riviera Buzz joins the City of Nice’s municipal councillor for culture, Jean-Luc Gag, in wishing beaucoup de merde aux théâtreux, and their public unforgettable moments of joy, laughter, fun, and amusement in a town which has been stage to political and clerical coups de théâtre for 700 years, and home to the world’s biggest, greatest theatre festival for 69 of them.