To kick off a new season as well as a new era at the Théâtre National de Nice, Ibsen’s Peer Gynt is getting an Extreme Makeover.

Irina Brook, the newly appointed Director at the Théâtre National de Nice, likes to think big and outside the box. Culture, the snooty way, is not her style. “Bringing people to the theatre, and theatre to the people”, is her philosophy. She is British, and influenced by a theatre culture that is inclusive rather than elitist – and to her, that also means offering an international program on the Cȏte d’Azur and its large multicultural community. No surprise therefore that the first play under her reign is both symbolic of her personal creative expression and her artistic vision for Nice.

And so, on 25th September, the 2014/15 season at the TNN will open with a bang. Of all plays, Irina’s choice fell on the Henrik Ibsen classic “Peer Gynt”. Ibsen is not usually the go-to author when you look for uplifting literature. Somber themes, failed heroes, Nordic melancholy – such is the stuff his stories are made of. But Irina Brook tackles this piece that critics previously considered “unplayable”, with gusto and style, and in her capable hands Peer Gynt becomes a flamboyant rock & roll musical, played in English, which is bound to shake the dust off the rafters, just like it did when it first premiered at the Salzburg festival in 2012. And for good measure, two of the songs in Irina’s adaptation come from none other than punk icon Iggy Pop who wrote them specifically for her.

Boldly putting her very own, very personal signature on Ibsen’s “Nordic Faust”, Irina transports Peer Gynt, the dreamer, the loser, the good-for-nothing, from his remote Norwegian village straight in the spotlight of international music stardom. Her Peer is a rebel who believes his rockstar alter ego PG on a par with the confirmed gods of showbiz, and considers the Music Hall of Fame his natural habitat. A Peer who is not afraid to plunge himself into every excess, every cliché that comes with fame. A powerful, complex, and at times obnoxious Peer who trails the planet from one end to the other…. one who struggles with finding himself, with staying true to himself… and who eventually shares the fate of his literary twin.

That such an audacious Peer Gynt interpretation still leaves room for poetry, reflection, and even a whimsical sense of humour, is the shared merit of Irina’s artistic sensitivity, the contributions of her favourite American author and literature Nobel prize laureate, Sam Shepard, who wrote 12 poems for her creation, and last but not least Ingvar E. Sigurðsson (pictured below) in the title role who brings both force and subtlety to the stage. An award-winning Icelandic stage and film actor with a 30 year career to his name, Ingvar is known to the international audience from work such as Angels of the Universe, Jar City, Beowulf & Grendel, and Of Horses and Men, and is also the founder of Vesturport Theatre, best known for productions like Romeo and Juliet, Metamorphosis, or Faust. Tall and muscular, with a very physical acting style, he incarnates Peer from cocky youth and excess-prone macho to vulnerable old man, credible at each stage along the way. A strong, fearless performance that has already received critical acclaim when the play premiered in Salzburg two years ago. 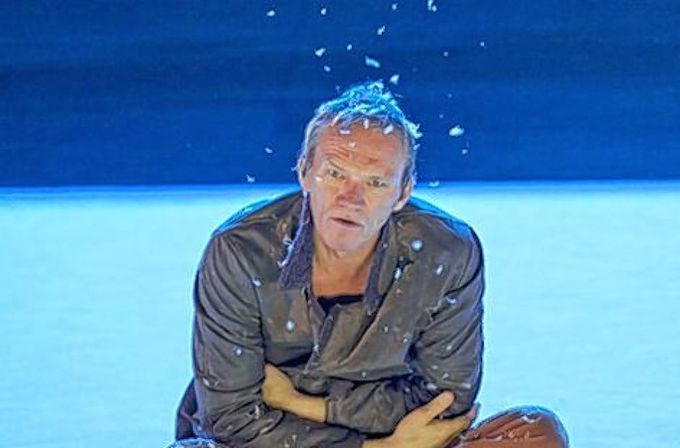 “I was thrilled when Irina asked me to play Peer Gynt. It is the third time in my career that I play this role. This journey of a man’s whole life is a catharsis for me as an actor,” Ingvar shares with us. Asked what it’s like to work with Irina, his excitement and respect are palpable. “A really good experience! She has a very good grip on Ibsen, and pours lots of enthusiasm into her work; she is more like one of us actors than the director on the sideline. The days are long and hard but at the same time relaxed, she is always open to suggestions. This Peer Gynt adaptation is a physical, musical, and multicultural play, not just “talking head theatre”, I love that.” 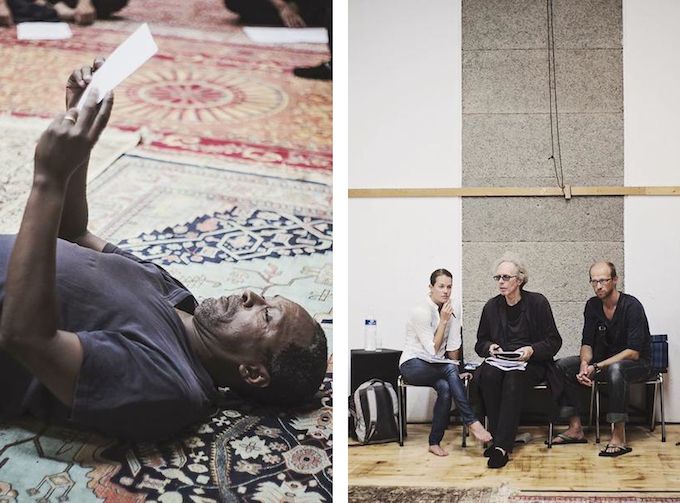 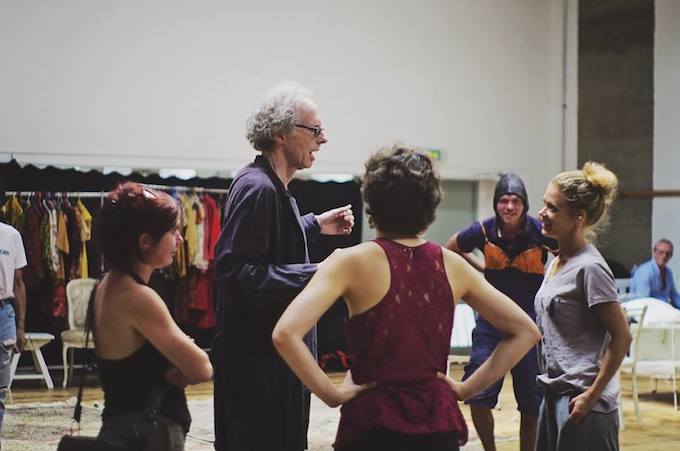 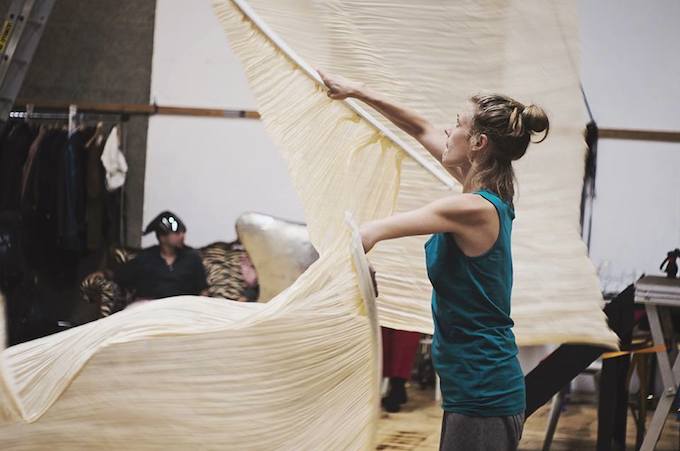 And multicultural it is indeed: the troupe consists of 15 actors, musicians, and dancers from every nook and cranny of the world, including Rwandan native Augustin Ruhabura, Gen Shimaoka from Japan, exquisite India-born dancer Shantala Shivalingappa, or sensual Norwegian sylph Frøydis Arntzen, to name but a few members of this multiethnic and multilingual ensemble. Some of them have been with Irina’s company, Dream Theatre, for years, others are joining for specific theatre projects like this one. All of them speak English though – and that is also the language this Peer Gynt is played in.

Isn’t it quite a risk to mount her first production for the Niçois audience in English? Irina doesn’t think so. ”There is a place for international theatre productions here, and it’s the right time to introduce them. The Cȏte d’Azur has become a very international place, not just through tourism but also through its substantial expat community which so far has been culturally underserved. At the same time it’s important for me to be able to bring my own way of working, my own beliefs to the TNN, the third largest French stage.”

Influenced by her upbringing on either side of the Atlantic, Irina grew up immersed in an environment open to a broad diversity of cultural expression and a Babylon of languages. “I consider myself an Ambassadress of Culture, and I really believe the Niçois are eager to embrace the TNN’s new direction,” Irina says with the disarming smile that is her trademark. But while making her mark on Nice, she also stays in close contact with the international theatre scene, and on that note, will take Peer Gynt to the Barbican in London in October. 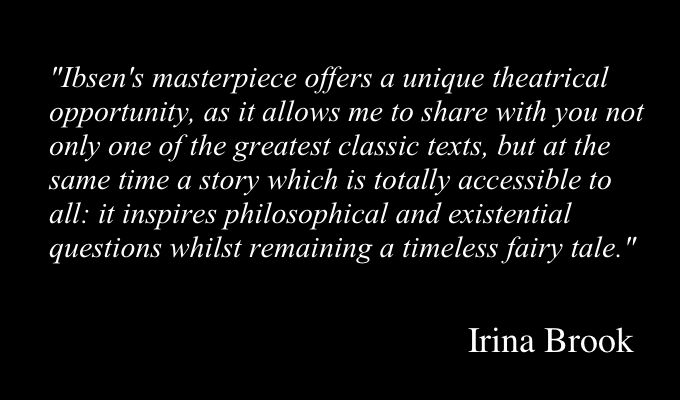 Irina, daughter of legendary stage and film director Peter Brook and acclaimed actress Natasha Parry, and with an impressive award-studded career of her own under her belt, came to the TNN in January 2014, following in the footsteps of Daniel Benoin who had led the House for 12 years and left at the end of 2013. Having previously been judged on her acting and directing work alone, she now has the responsibility for an entire programme and a new artistic direction in a town that at times finds it hard to let go of established habits.

But Irina has great plans for Nice, and, as Peer Gynt proves, is not afraid to venture into new territory. Even before the opening of her first season, she already started to impress her own style and signature on her new environment, slowly phasing in with monthly readings. Pleasant and approachable, poised and confident, she seeks contact with the public, she enjoys communicating and interacting with people from all walks of life. And true to her personal motto, which is also captured in the new TNN slogan, “Le Théâtre ouvert sur l’horizon” (open toward the horizon), the 2014/15 programme is a living stage, a wide selection of plays and events in different languages, for all audiences and tastes, but always of high quality. In mid season – January and February – Nice will also get its very own Shakespeare festival, called Shake Nice. Indeed, Irina shakes Nice, in more than one way. But first, she shakes Peer Gynt – a theatre event absolutely not to be missed.

For further information on the new programme and ticket sales, please visit the TNN website. 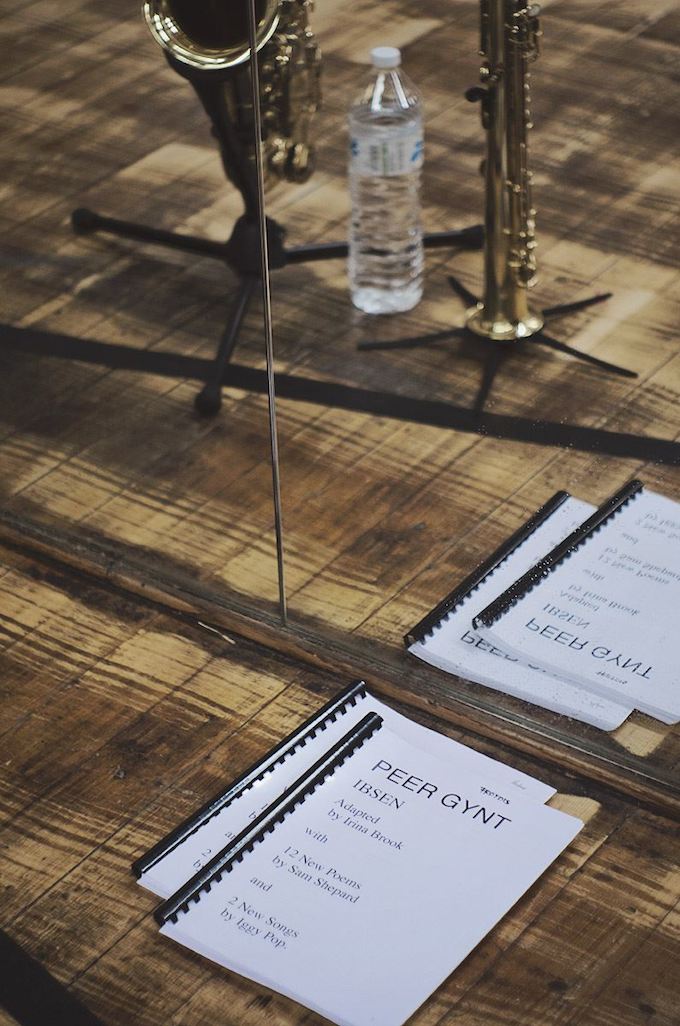