Local artist Paul Morris produces what he calls ‘mostly green stuff’, and in doing so creates renewed images out of mostly forgotten things.

His work has previously been exhibited in Berlin, Glasgow, Edinburgh, London and Cannes, and his work is permanently displayed at Café Borghèse in Nice Port. His most recent work, some of which is on a musical theme, is being exhibited at the upcoming collaberative exhibition ArtBeat taking place at the B Spot in Nice on 9th and 23rd May 2013. The events are a blend of art and music, and offer a chance to peruse Paul’s works whilst soaking up some live music over a tipple or two.

I recently had the chance to interview Paul about his work and his inspirations; here’s what he had to say:

What inspires your work?

So many things inspire me, mostly ordinary every day things. I try to instill a sense of the past in my work; things like old weather-worn walls, old photographs and retro printed material are beautiful things in my eyes. I also bring in the aesthetic of neglect, but at the same time of stillness and permanence. Many artists obsess about capturing things such as movement, light and form, but I am more interested in what’s been forgotten, in mood and in a sense of melancholy. What I’m doing is making sure things are not forgotten. 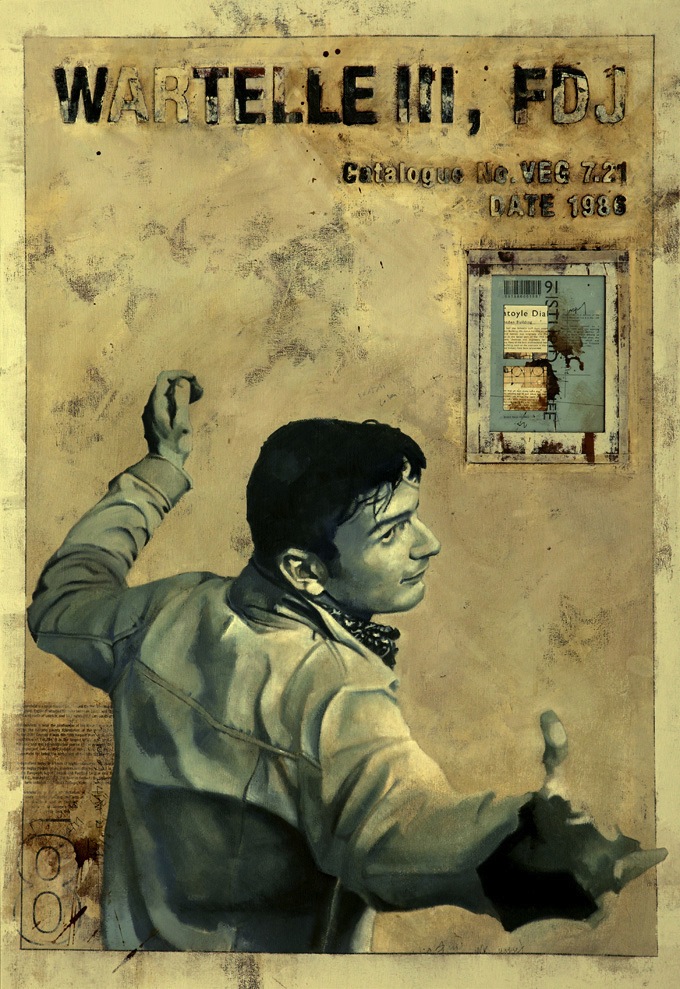 Did someone in partcular inspire you or encourage your early career?

When I was at school, my art teacher took me under his wing from the very first time he saw me draw, and he pushed me in a way that he simply didn’t bother doing with the other students. He was also the person who made me realise I had a talent worth nurturing and that I should take myself seriously as an artist.

Did you attempt to emulate anyone you were inspired by or did you always have your own style?

I think I did in my very early days at art college, yes. But that didn’t last long. There really is no point in imitation, is there? But it’s very common for an artist to start out by imitating someone else. Then with any luck, your own style will begin to emerge; my style just evolved – it’s the natural aggregate of all the things that have influenced me. Which is too many to list.

You produce drawings as well as paintings – does drawing come more easily to you than painting?

Once upon a time drawing came far more easily to me than painting because I didn’t really start painting until I was about 15, whereas I had pretty much drawn from the day I could hold a pencil. I love to draw; I find it very rewarding, but I don’t think it has any influence on my other work. It’s almost like I am two artists really. 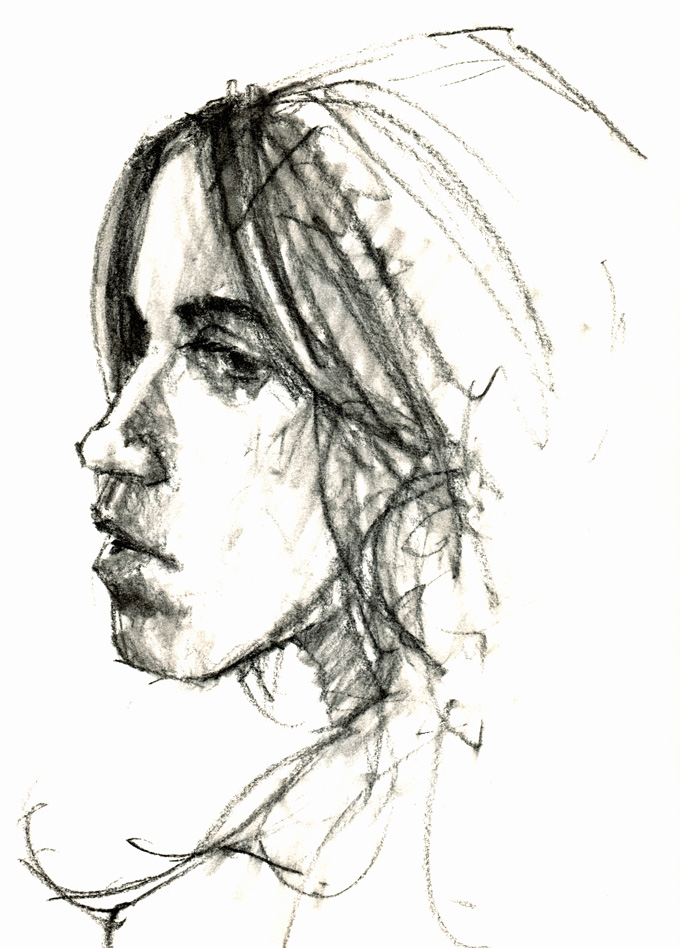 Do you always use people you know in your paintings?

Usually yes, but not exclusively. If it’s not someone I know, then it’s usually a commission piece.

I was going to ask if you take commissions and work with images supplied by other people?

I’ve undertaken quite a few commisions actually, and its something I really enjoy doing. It’s very rewarding to see how much more powerful the response is to my work for a person if the piece is about them. Because I work with archival materials, it lends itself very well to doing commissions.

Do you produce paintings one by one or do you work on multiple pieces at the same time?

I’m a freelance web designer, so when I have to work on that my artwork gets put to one side. The rest of the time, I’m pretty much working 7 days a week . Ordinarily, I have anything up to 20 pieces on the go at any one time; I flit between them depending on my mood or when inspiration hits me. Some works get put aside when I feel it’s not coming together, some works I have to abandon altogether. I daresay its the same for most artists. 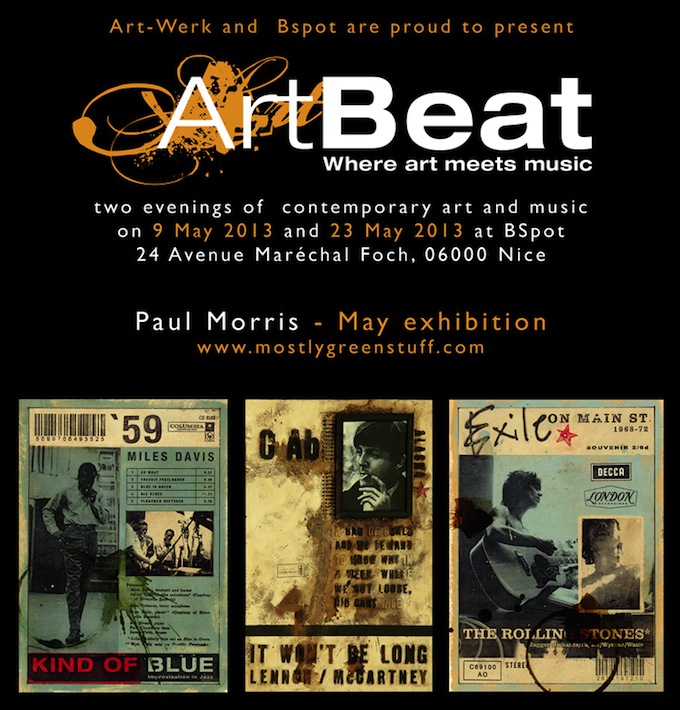 How did you come to be living on the Côte d’Azur?

I first came to France when I was 17; I stayed with my father in Provence for the summer and fell in love with it. As I became increasingly tired of the grey skies in London, the south of France seemed like the natural place to come to.

And finally, if you could own any artwork in the world, money no object, what would it be?

I don’t even need to think about that! As a painter, the artist I most admire is Alberto Giacometti. He had a retrospective at the Maeght Institute in St. Paul de Vence a couple of years ago and I went to see it three days running. The first day, I only really left because the gallery was closing! If I could own any artwork in the world, it would definitely be one of his paintings. There has simply never been another painter with whom I connect in such a powerful way. 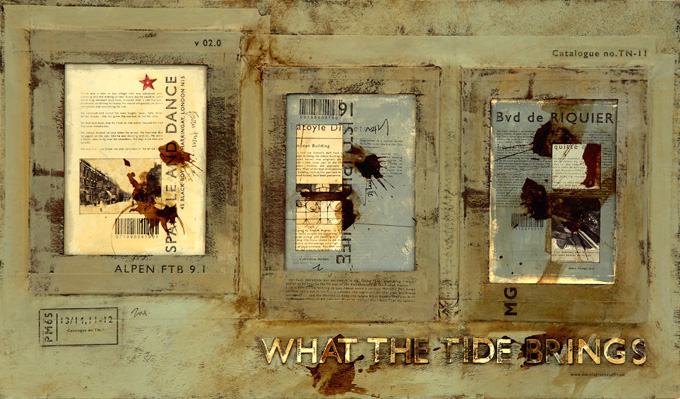 All images courtesy and © Paul Morris