A new show in Old Town Nice features the genteel art of portrait painting, a discipline where the artist rather than the model was the star

They were the influencers and cover girls of their days: those who had their likeness immortalized on canvas in centuries gone by were typically prominent, influential, and wealthy citizens, ranging from the Royal court to the bourgeoisie in town. But while the names and stories of only a handful among them have gone down in history, the artists who portrayed them often rose to fame that still lives on today. Under the title “Cent Portraits pour un Siècle” the City of Nice now presents a collection of one hundred 18th century portraits created by such famous artists as Louis-Michel Van Loo, Elisabeth Vigée Le Brun, Joseph-Siffred Duplessis or Joseph Ducreux; and the organizers could not have picked a more suitable backdrop than the Baroque-era Palais Lascaris at 15, rue Droite. The exhibition is underway and runs until 30th June, 2021. 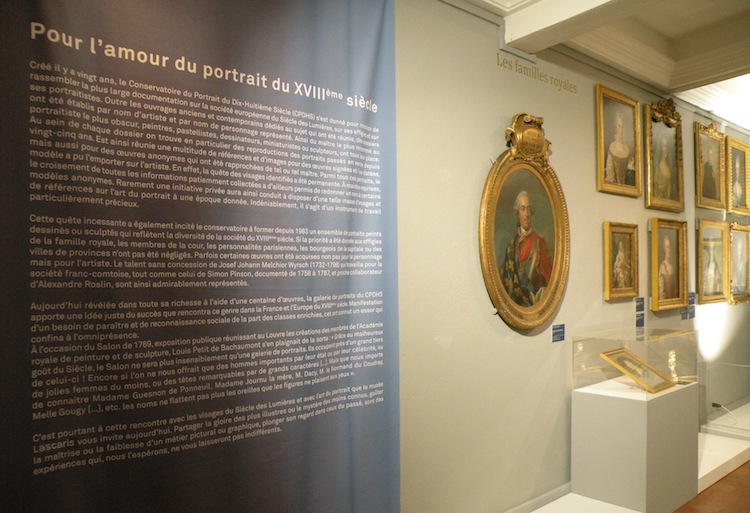 In the 18th century, portrait painting was second only to history in the hierarchy of artistic and intellectual genres. Court-appointed artists created the effigies of reigning kings Louis XV and Louis XVI, and the royal families, while other aristocrats, clergy of rank or local notables in quest of social recognition sought out more accessible portrait artists. But even ordinary citizens were only all too happy to model, often for apprenticing painters.

Élisabeth Louise Vigée Le Brun was one of the few female artists of her time, standing out for her unique style that mixed elements of rococo and neoclassicism. Her career blossomed early, and at only 23 years of age, Vigée Le Brun was granted patronage by Marie Antoinette, Queen of France. Over time, she painted more than 30 portraits of the queen and her family. One of her portraits of the French Royal counts among the highlights of this new exhibition:

“It was not until 1778, however, that the Queen was finally completely satisfied with her portrait. The work had been painted by Madame Vigée Le Brun. With talent, the artist was able to soften the features of Marie-Antoinette, but without losing the resemblance. The nose and lips were certainly still Habsburg”. (exhibition catalogue)

Representing the changing society of an entire century, the paintings on display at Palais Lascaris are a superb demonstration of painting and the art of portraiture. On loan from the Conservatoire du Portrait du Dix-Huitième Siècle, they beautifully complement those of the permanent collection.

The exhibition, previously presented at the Musée Lambinet in Versailles, fits seamlessly into the 17th century Palais Lascaris. An exceptional example of civil baroque architecture, Jean-Paul Lascaris, Grand Master of the Order of Malta, had it built for his nephew Jean Baptiste Lascaris, and from the time of its completion through the end of the 18th century it served at the private residence of the aristocratic Lascaris Ventimiglia family. Situated in the heart of the city, in the narrow winding streets of Old Town, the Lascaris Palace witnessed both opulent and tragic chapters in the history of the County of Nice. Today, it is a museum devoted to the art and music of the 17th and 18th centuries, displaying a wealth of period furniture, tapestry, artwork, and musical instruments.

‘Cent Portraits pour un Siècle’ runs until 30th June 2021 at Palais Lascaris in Nice. Open daily 10 am to 6 pm except Tuesdays and public holidays. The historic building is unfortunately not equipped for visitors with reduced mobility. All sanitary measures as per municipal and national governmental directions apply.