When the respectable Times of London raves about an illusionist show as “Magic’s Cirque du Soleil” and the venerable New York Times labels it “a high-tech magic extravaganza”, you know it is good enough even for discerning Monaco. From April 11 through 14, The Illusionists will be performing their Live From Broadway show at the Grimaldi Forum, featuring a powerful choreography of some of the most outrageous and astonishing acts ever seen on stage. Packed with thrilling and sophisticated magic of unprecedented proportions, the show invites audiences of all ages to witness the impossible…. stunning acts of grand illusion, levitation, mindreading, and disappearance.

The Illusionists is a touring magic production which premiered in Sydney, Australia in January 2012, and loosely bands together a rotating cast of five to eight magicians who all specialize in specific branches of magic, from stage illusions to mentalism, escapology, and comedic magic. This new generation of magicians takes its cues from the showmanship of great illusionists of the past such as Harry Houdini and pairs them with new and contemporary aesthetics. Costumes and set design lend the genre a theatricality and artistry that has rarely been seen before. Music, light show; and a good dose of humour makes for a uniquely entertaining spectacle for all ages.

Featuring their individual skills, the performers slip into specific characters, among them:

British born Daredevil and Escape Artist Jonathan is widely considered one of the most creative, skilled, and – frankly – crazy stunt performers in the world. Goodwin has been hanged, buried alive, hung by his toes from helicopters, burned at the stake, and even attacked by sharks to name just a few of the terrifying and insane stunts his mother wishes he hadn’t tried. Additionally, Jonathan is an accomplished knife thrower, archer, escape artist, fakir, martial artist, free diver, free climber, and dad. Unlike the other performers in the show, Jonathan is not a magician or illusionist and everything you see him do is very, very real.

Look at your hands, your nails, the heels of your shoes; what do you see? Nothing out of the ordinary? Now, imagine someone who could look at those details and see everything. Everything! This is precisely what Colin Cloud, aka The Deductionist, does. He’s the Sherlock Holmes of entertainment, if Holmes had a flair for comedy. Colin will know what you’ve had for lunch, where you’ve been that day, what you do for a living, the car you drive, even your PIN code. He’ll read you like a book, and he’s already sure you’re quite the page turner.

Cloud will deduce everything about you, then he’ll be kind enough to explain how he did it. You’ll understand why he’s never lost a game of poker, learn how to discover the phone number of anyone you like, recall information from the recesses of your mind, and he will even share with you the ability to connect with people on a deeper and more meaningful level than you’ve ever experienced before. Colin will leave you convinced he’s a psychic savant with the hypnotic powers of a calculated angel, making him potentially the most dangerous man in the world. Luckily, he’s on our side… We hope.

Kevin’s style of performance is anything but conventional, with his unique comedy and magic garnering him a reputation as a world-class visual artist and making him one of the highest viewed magicians on YouTube with millions of hits. Kevin is a very prolific inventor and consultant of magic. Not only are his performances original, but many of his ideas have made their way into the shows of other famous magicians, such as: Doug Henning, Penn & Teller, Mark Wilson and David Copperfield, as well as several films. He is related to the legendary P.T. Barnum, and he’s like his famous ancestor in many ways. His artistic vision was to create the most unique show on the planet and make adults feel like a kid again, which he describes as the “Best job ever!”

AKA An Ha Lim

South Korean An Ha Lim, The Manipulator, is a man of few words, but many awards. The accolades he has collected since 2006, include some of the most prestigious global distinctions in his discipline. See here why:

Jeff Hobson is the epitome of glamour and showmanship. His brand of comedy magic leaves audiences laughing long after the curtain goes down. Don’t be fooled by his innocent appearance, The Trickster will get you every time…

Note: Up to seven performers may appear in Monaco but are subject to change.

Collectively these outstanding performers have been seen by millions of people around the world, and this production showcases their incredible talents together on stage for the very first time. Monaco is the one and only stop in Western Europe and the extension of the Illusionists’ bestselling Broadway show. And these 2 hours and 10 minutes of pure magic will make a believer of you, too.

Tickets may be reserved online. 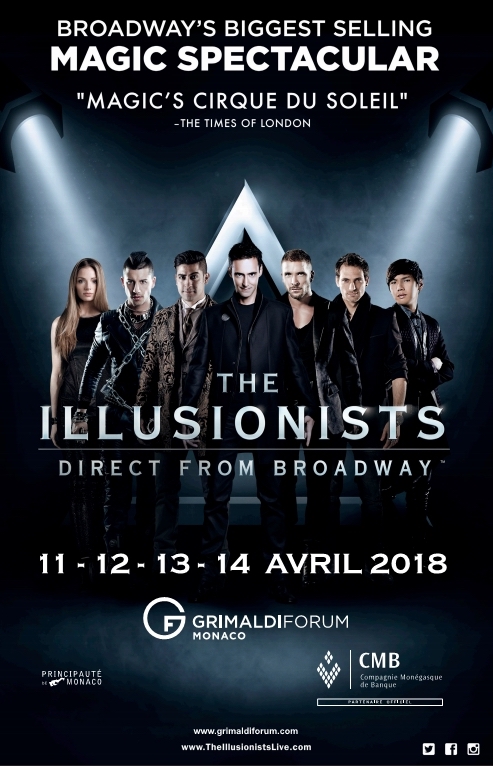