A French woman and a Syrian man prove daily that even humble private citizens can have a huge impact on children and families in war zones.

“Oh, those poor little kids! If only I could help! But there is nothing I can do…!” The classic chant of many Westerners shows their perceived helplessness in the face of the horrors that Syrian children are living day to day. For these kids, dodging bombs and losing friends and family to the raids has become a firm part of their young existence. After close to eleven years of war, many of them have never known a day of peace in their whole life.

But Laurence Gaudin Ahya-Abdou from Bordeaux and Hussein Kaddour Mashkel from Kafr Sijnah, a village in Northern Syria, are doers, not bystanders. They have found a practical way to bring much-needed help to these kids and their families. Before they connected on social media three years ago, each of them was already volunteering for humanitarian causes. But ever since they teamed up, they have worked miracles… Miracles that the slow-moving bureaucracy of NGOs cannot make happen as fast and as efficiently as these two civilians and their global network of supporters. Their latest and possibly proudest achievement to date: a school for orphans, inaugurated in September 2021. 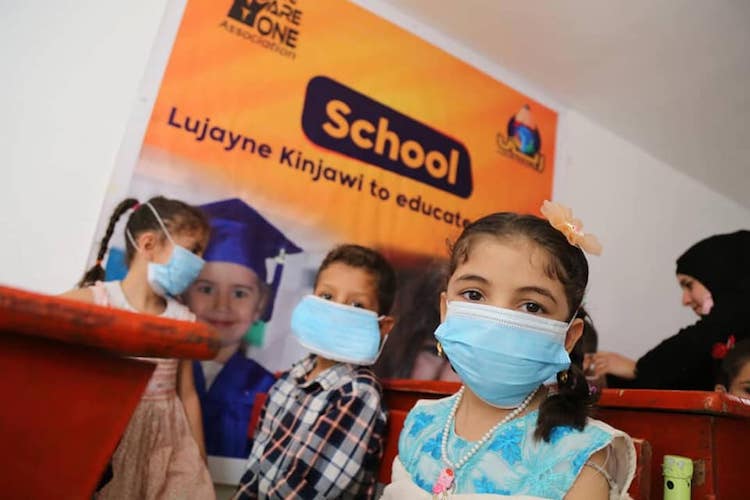 We were curious how these two exceptional people go about their charity work that transforms the lives of the young Syrian generation, at least locally in the Idlib Governorate in Northern Syria. Do they have unlimited funds like certain space-traveling billionaires? Do they have friends in high places?

No – far from it. Hussein and Laurence are ordinary citizens like you and me. They kindly shared with us their personal stories, and the simple but practical ways they help change lives and restore faith in humanity.

Hussein Mashkel, the Man on the Ground in Syria 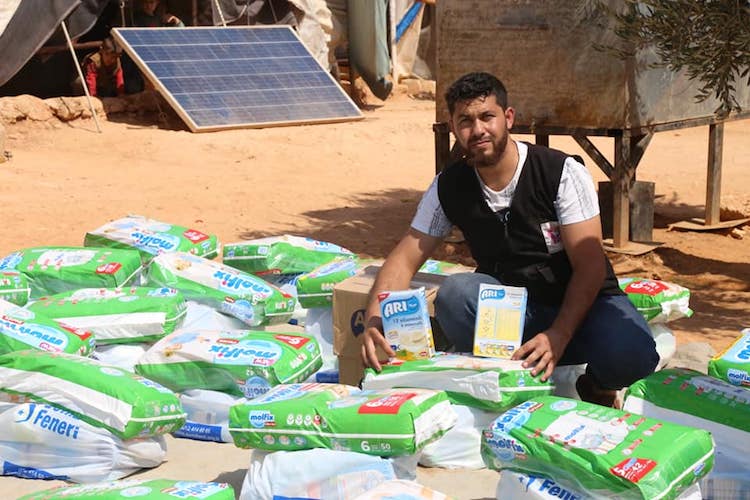 Hussein Kaddour Mashkel was born in Kafr Sijnah, a village in Northern Syria, in 1992. He comes from a good and well-respected family that owns substantial agricultural land, his father is a teacher. Before the war breaks out in 2011, Hussein takes up studies at the Faculty of Law at Al-Baath University in Homs, while also working as a policeman. But trouble is brewing on the horizon:

“At the beginning of the revolution, I received orders to imprison protesters and possibly kill them,” Hussein tells us. Just 19 years old at the time, he finds himself unable to do that. So he quits working as a policeman in Assad’s ranks. The world he has known growing up crumbles once and for all when the Syrian army storms his village, forcing the family to flee because of the bombing. Someone keenly devoted to the service of others, Hussein starts working with several associations in the humanitarian field, helping the disabled and displaced. 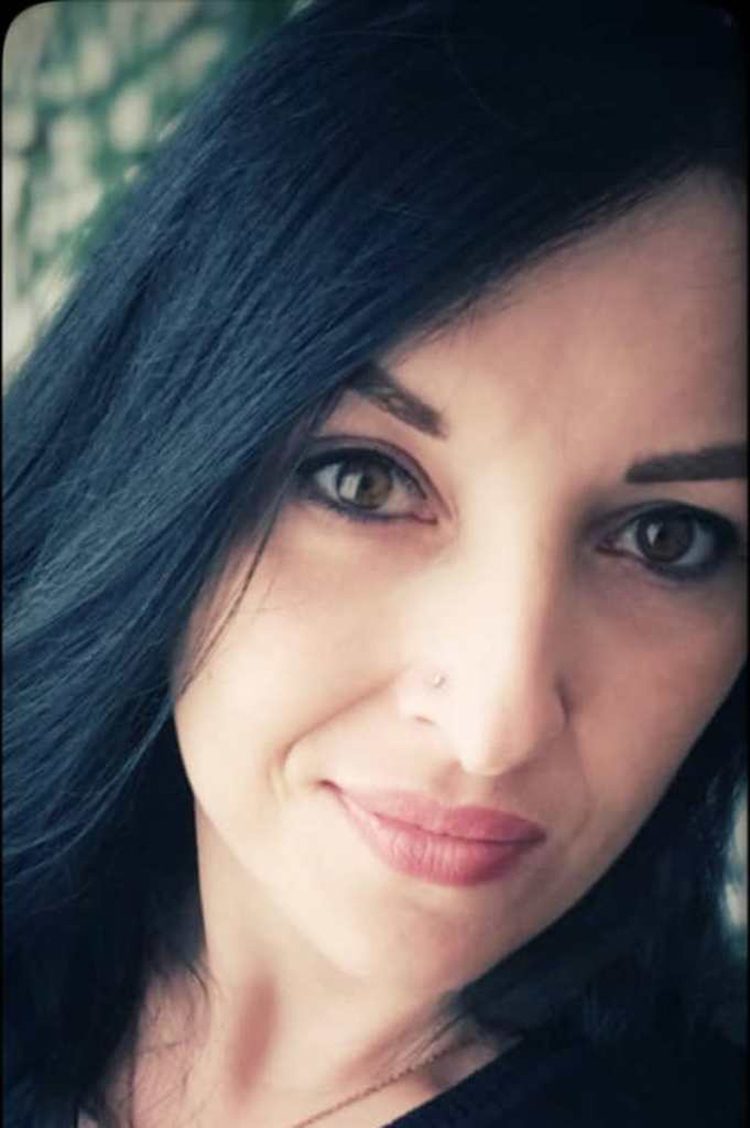 Meanwhile, in faraway Bordeaux in South-Western France, Laurence Gaudin Ahya-Abdou, born in 1983, grows up in difficult circumstances. She has an early and rough start into adulthood: her father is an alcoholic, her mother dies when Laurence is only 16.

Thanks to her strict and value-based upbringing, she chooses to stay on the straight and narrow. She becomes a homecare assistant and works in that field until 2014 when she changes careers, training as a nail technician. In the meantime, she has a daughter to take care of who hails from her failed marriage to a Moroccan. Laurence decidedly has artistic talent – her sketched portraits are impressively life-like: 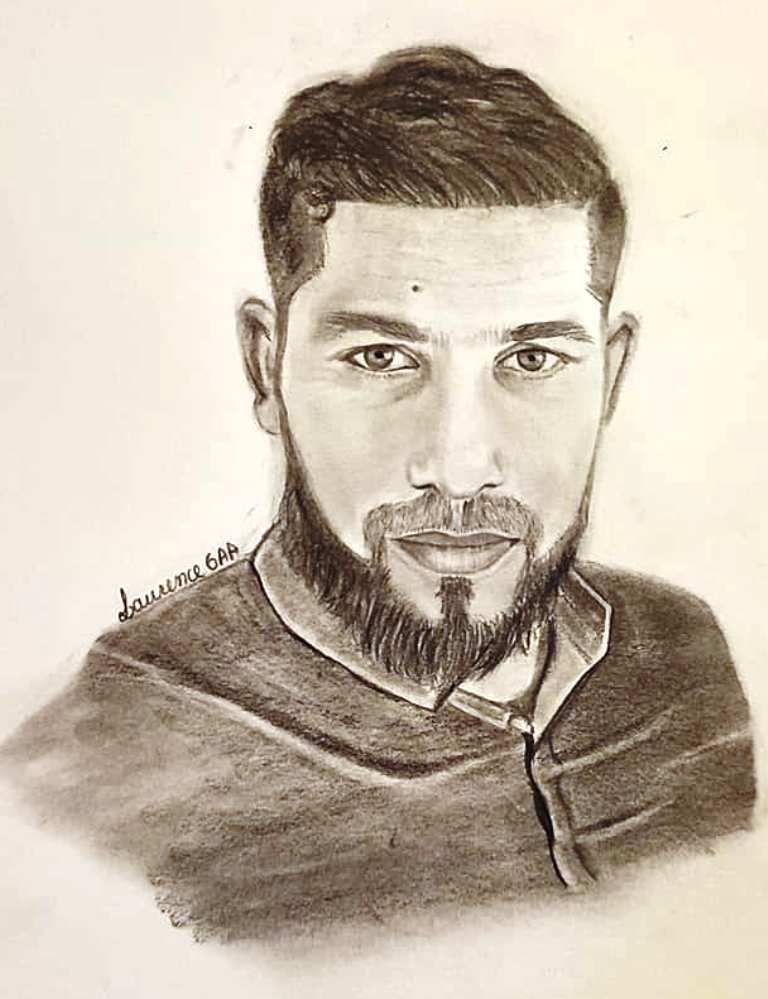 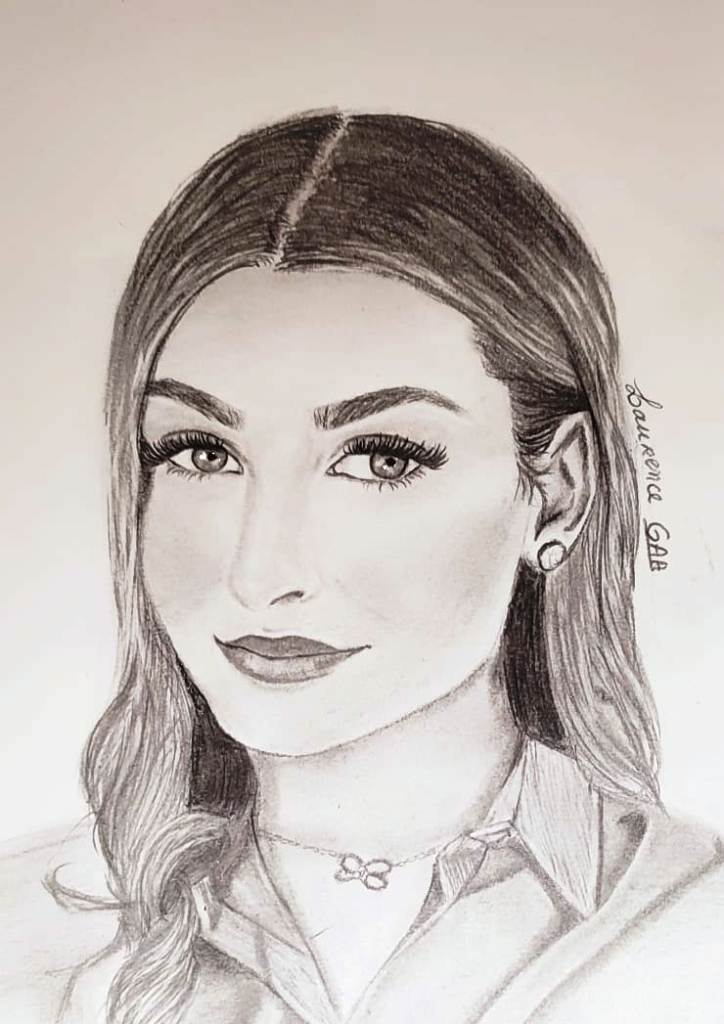 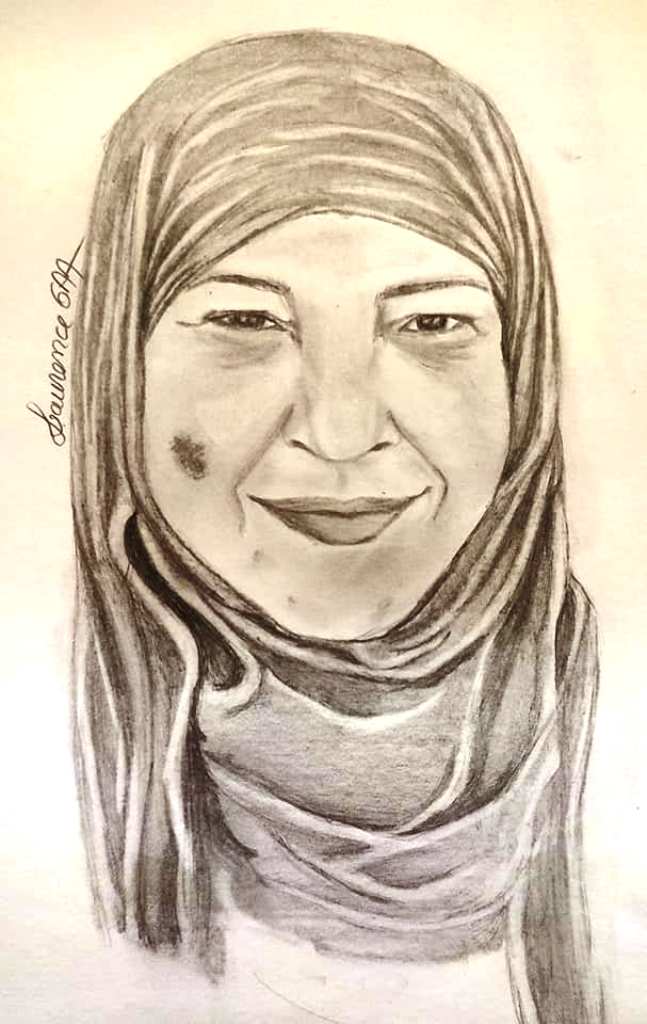 But in her heart of hearts, she is a humanitarian. She volunteers here and there, and donates to various causes. The plight of the Syrian people really moves her heart, and she puts a lot of effort into telling the world about the difficult conditions in Syrian refugee camps, using social media as her soapbox. And she has a dream: to one day have her own charity because, in her own words, “if you donate to the big organizations, you are never quite sure where the money goes.”

One day Laurence gets a friend request on Facebook by a stranger named Hussein… the same Hussein who on his side is just as active in helping his fellow countrymen, and notably orphaned and disabled children. He is impressed by her compassion and interest in the struggle of his people.

As mutual trust grows – and rudimentary English skills improve through communication in this one shared language – Laurence asks her new friend to help her with a fundraiser to buy a wheelchair for a disabled Syrian boy in a camp. The campaign is a huge success, and with the help of donations that pour in from all over the world, young Anas not only got his electric wheelchair but also a new propane-gas heated tent, clothing, toys, food and toiletries. Seeing the boy’s joie de vivre return to his little face is just heart-warming. 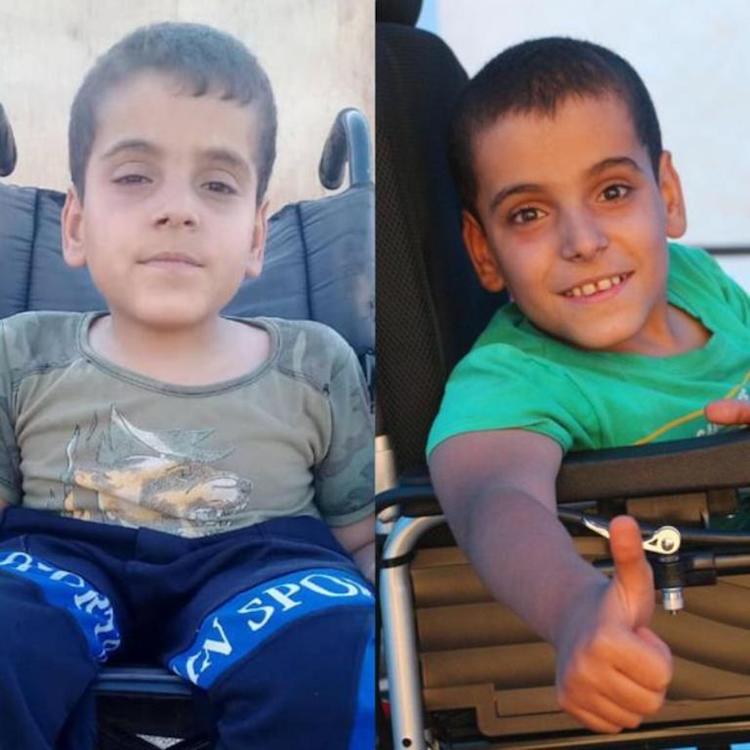 And that is the trigger to finally put dreams into action. Armed with the advice of their Syrian-American friend Dr. Amjad Kinjawi, a Massachusetts-based dentist, Laurence and Hussein create their own non-profit charity on July 8th, 2021, “We are One for Humanity”. Partnering with Smile Younited, an experienced French association, helps them navigate the complexities of legally and securely collecting funds for Syria via online platforms.

Witnessing the horrors and brutal living conditions that Syrian children are exposed to every single day is one thing. But if NGOs on the ground do their best to cover daily immediate needs, these young ones also miss out on school, education, and a foundation for a better and brighter future. In the Idlib Governorate, most of the hospitals and schools have been destroyed by Russian bombs. Tens of thousands of children have lost their families in the conflict. Of the remaining schools, many have had to close due to lack of funding, and the few that are still open, are overcrowded.

“I saw with my own eyes the tragic and sad lives of orphaned children after their parents’ deaths. So I wanted to open a school for orphans to give them a chance that their start in life would be education instead of war. I want their minds to be filled with science and happiness.” — Hussein Mashkel

When he shares this desire with Laurence, she is all for it. And one more time, wishful thinking turns into swift and decisive action. Guided again by their trusted advisor Dr. Kinjawi, the two create a co-ed preschool for orphans.

Named Lujayne Kinjawi School in honour of their friend’s daughter – who herself also regularly empties her piggybank for We Are One – the facility opens its doors in the centre of Idlib on August 9th 2021. A director, four teachers, and an activity facilitator take care of 75 boys and girls, aged 4 to 6, providing them with a safe and fun place where they can be kids instead of having to worry about their survival, and where they receive playful elementary education.

The school is financed through Facebook and social media fundraisers… but while people around the world are willing to donate, pledge drives for schools don’t seem to enjoy quite the same popularity as those for cute cats.

Asked what individual story has touched him the most, Hussein answers that among the many, one stands out in particular: “There are two orphan brothers, one of whom has an amputated hand. The other one doesn’t leave his side, helping him learn and negotiate his way through life with his handicap.” That is representative for the way Syrians look out for each other through thick and thin.

But while the school is at the centre of We Are One’s charitable work, lots of other projects are also underway. “For the past year, we have helped thousands of families through the distribution of clothes, bread, water, food and hygiene packs, heaters and fuel, and blankets. On the medical side, we have also taken care of several children’s emergency surgeries and provided a total of 6 electric wheelchairs,” Laurence reports. 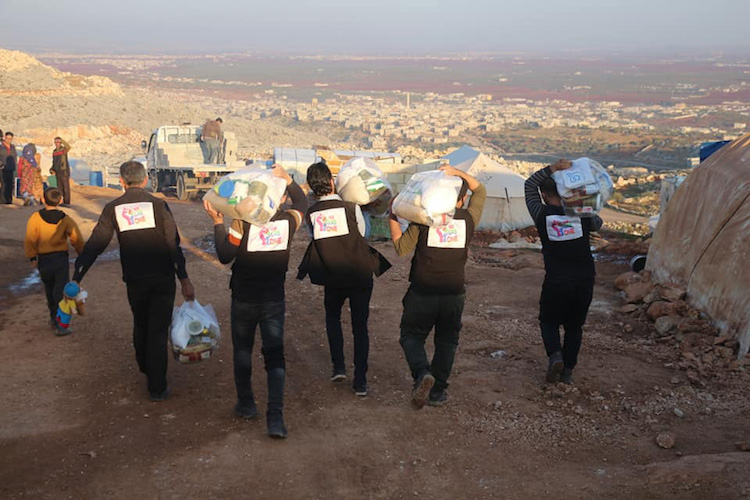 But right now, the onset of the harsh and wet winter of Northern Syria is just weeks away, and the association is already busy collecting funds to buy desperately needed warm clothes and shoes, blankets, charcoal, food, baby supplies… purchased locally due to the restrictions for sending items – even a little bit of money goes a long way here. And Hussein is a masterful negotiator in the market to source the supplies for the poorest of the poor.

The association has also constructed three houses so far: the first one was erected for two grandparents taking care of their orphaned grandchildren, who were living in an unsanitary tent. The second one, dubbed “Princess Aya’s Palace” was built for a little girl who suffered severe burn injuries when her family’s old and flimsy tent caught fire, disfiguring her face. The new house made of brick and mortar will help her overcome the psychological trauma she is still struggling with. And the most recent house to date was constructed for Ahmed, a young disabled father in a wheelchair. While Aya’s house was being built, he came to the construction site daily, sitting there all day watching the progress, crying, and dreaming that one day he would leave his tent for his own house. We Are One has made his dearest wish come true and put a heart-melting smile on Ahmed’s face. 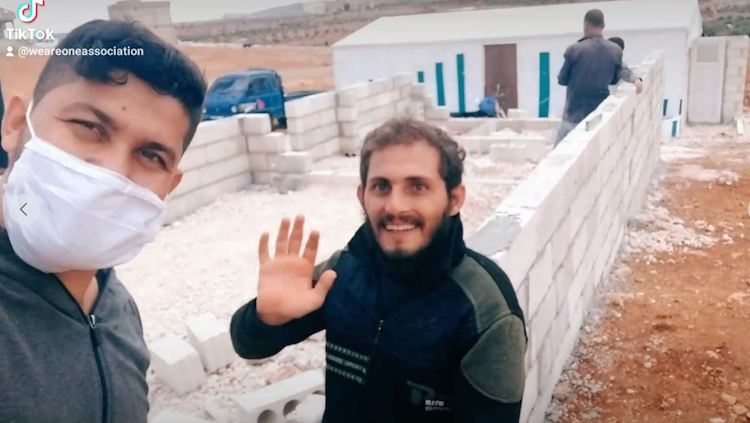 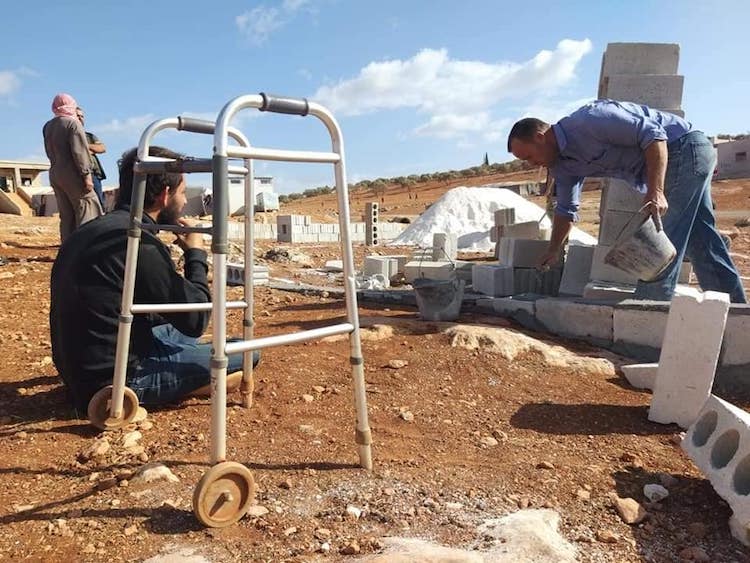 Building a house here can be done with very little money – $2,500 is all that is needed to put a solid roof over the head of a family in need. The labour is provided by locals who never shy away from lending a hand in the way they know best – putting in hard work.

Apart from being a director of his association, Hossein today works as a journalist, often doing Facebook Lives from the field. He goes around countless camps every day to see and talk about the conditions of refugees. Taking care of their material needs is one way of helping them, but “when war, destruction, and terror is very much a part of your daily life, how do you cope with it mentally and emotionally?”, he wonders. As a Syrian, and the father of two young sons, he grapples with that question for himself. But spreading hope and love, and bringing smiles to sad faces is his own therapy, and all the motivation he needs to keep going, and to remain stable and sane. He has one dream, apart from that for a peaceful Syria: “I hope that one day I can visit all the places that need help, like Togo and others in Africa. I wish I could just hug and help all children in all countries.” 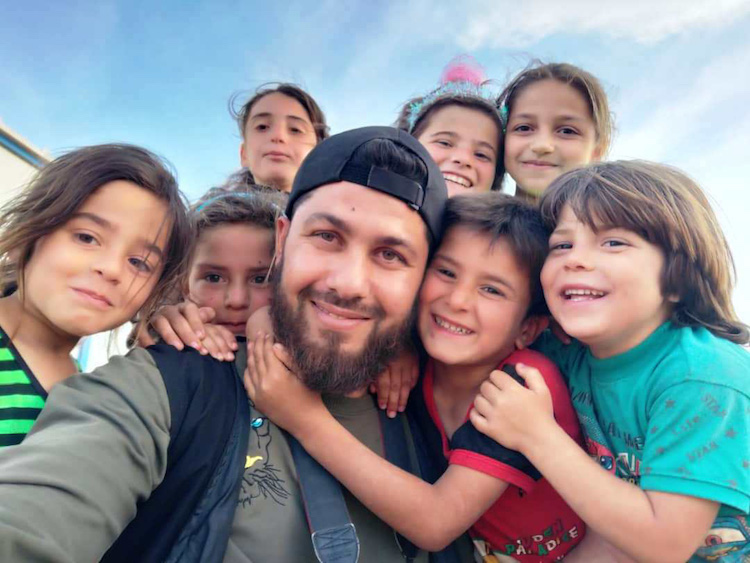 And for her part, Laurence wants to send a reminder to Westerners: “People are afraid to help countries at war, and in particular Syria, because in general the media associate the country with terrorism. But Syria is not just that, it is millions of families living in tents, in extreme poverty.” The big problem, she explains, is that nobody talks about what’s going on in the war-ravaged country, that the world shuts its eyes to its reality, and that every day Syrian men, women, and children die as a result of this silence.

Readers who would like to support We Are One in its endeavor to alleviate the brutal hardship in this formerly prosperous country, have various ways of doing so: the easiest one is via a donation to the association’s Facebook fundraisers. Those who are not on Facebook, can email Laurence Gaudin Ahya-Abdou for further details and bank information (she speaks French and English.) All funds go directly to the cause, there are no overhead costs, no salaries, no office rentals, no bureaucracy. And importantly, due to strict auditing and full transparency, no money is secretly funneled to sinister causes. WE ARE ONE – with you?

All photos courtesy We Are One and as credited