After four years in the making, the latest addition to the Oceanographic Museum has been unveiled several weeks ago much to the delight of visitors and sea turtles alike

Predating dinosaurs and living alongside the first hominids, sea turtles have been around for an estimated 240 million years, surviving and adapting to all challenges along the way. Now for the first time in their history, they are acutely threatened by extinction through man’s intervention. Coastal development, overfishing, various types of pollution, boat traffic, trawl nets… all have a direct impact on the health of turtles, and their survival as a species.

To counteract that, the Oceanographic Institute in Monaco, an integral part of the homonymous museum, has just opened a state-of-the-art rescue centre which serves as a care and rehab centre for sea turtles during veterinarian treatment or transition from captivity to release, and a permanent home for those that cannot be sent back to the ocean. It also has a mission to educate the public on the prehistoric animal and sensitize especially the young generation to its protection.

From their life cycle to the dangers that threaten their existence, from their unique nesting habits to the actions being taken to preserve them – the story of these prodigious migratory reptiles is told in a brand new 550 m2 (6,000 sq.ft.) annex to the Oceanographic Museum. Directly accessible from the aquarium, the permanent facility dedicated to “L’Odyssée des tortues marines” (“The Sea Turtle Odyssey”)  invites visitors on a journey of discovery as educational as it is entertaining. The declared goals are to draw attention to the dangers these migratory reptiles face in our modern times, to create a sense of individual and communal commitment to their protection, and to encourage a dialogue with the public (visitors of all ages, researchers, decision makers, educators, and animal protectors.)

“In Monaco, within the framework of the French Mediterranean Sea Turtle Network (RTMMF), we have been giving refuge to sick or injured turtles for years,” explains Robert Calcagno, director of the Oceanographic Museum. “[Now] we are taking an important step by opening an awareness-building space devoted to them.” This facility is both evidence of a strong and lasting commitment to this fascinating animal, and proof of the institute’s aspiration to bring people together around the critical issues that need to be addressed.

A Virtual Walk Through the Sea Turtle Rescue Centre

The newly built annex transitions seamlessly from the aquarium to the space dedicated to the sea turtles, leading first to a kitchen where through large windows you can watch the top chefs of the marine world prepare gourmet meals for all residents of the museum’s aquariums. Tidbit information – in an effort not to waste any food, local supermarkets’ unsold fresh fish goes to the aquarium, and the amount needed is surprisingly small: 150 kg (330 lbs) per year feed the museum’s entire fish and reptile population. Turtles are fed twice a week, and the public is welcome to watch. But leave it to the pros to serve them their meals – these predators have extremely strong jaws and can break a human’s limb in one clean snap.

Next stop, the five indoor tanks, where incoming turtles can acclimatize to their new environment and sick ones are cared for. Their most frequent injuries: being caught in fishing nets, fishhooks stuck in their throats, cracked shells or the ingestion of plastic. Trained technicians, skilled in the handling of protected species, work with specialist vets and other French and European rescue centre networks. This is also an opportunity to contribute to study programmes related to the species’ biology, behavior and environment. Many of the patients come directly from the Mediterranean coast in the vicinity of Monaco.

Before you leave the indoor space to visit the outdoor tank, informational boards provide further facts and trivia, and a miniature landscape lets the youngest visitors playfully explore the reptiles’ lifecycle on land and in water.

The new outdoor basin, designed and built by renowned Monegasque architect Patrick Raymond, is both a technical feat and an esthetic marvel. Set in the rock wall and overlooking the Mediterranean Sea at its feet, it holds 160 m3 (42,200 gallons) of seawater, secured by a 21 cm thick plexiglass wall measuring an impressive 10 m x 2.5 m. 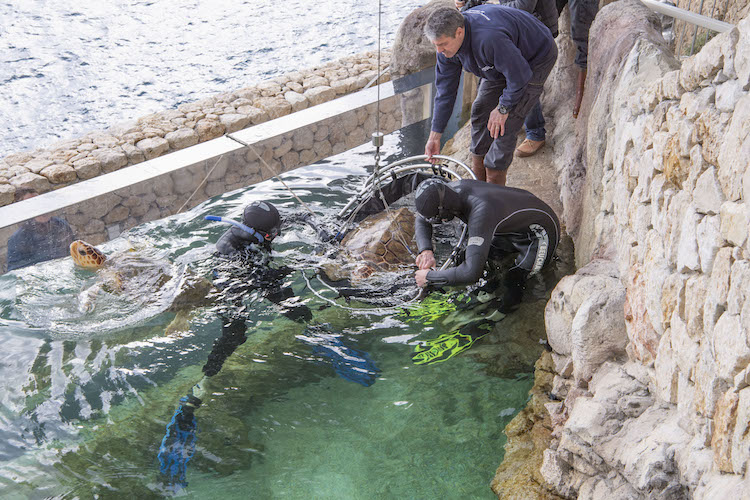 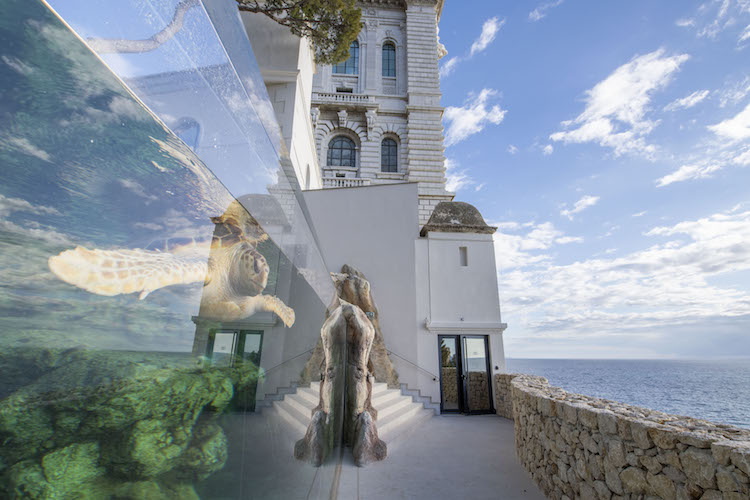 This massive tank is currently home to two young loggerhead turtles and a good number of fish for company. Avril and Samy were born in captivity in 2011 and recently rescued from one of the dubious commercial operations featuring sea animals. Although the Oceanographic Institute’s primary goal is to rehab turtles with a view of releasing them back into the ocean, these two have been judged to be currently incapable of living in their natural environment, lacking the capacity for survival and their hunting instinct, and will therefore likely remain permanent residents.

Of the other animals that do get released back into the sea after due veterinarian care and the reinforcement of their capacity to swim and feed, some are fitted with a “hightech backpack”. This scientific device allows the carers to collect vital data about their movements, behaviour or feeding areas. The general public can follow the itinerary of these rehabilitated turtles online.

The rescue centre was built over four years and bridges the existing museum building and Jardin St. Martin. While the site was prepared for works, the Monegasque Museum of Prehistoric Anthropology came in to carry out first preventive excavations. The site, which included a watch tower and remains of medieval ramparts, revealed not only an old gallery but also a wealth of architectural material (flint tools and jewelry made of metal, shells and ancient ceramic). An even more surprising find: 50 human bones, some of which belong to an approximately 30 year old man who lived on the Rock in the 15th century, the time of the arrival of the Grimaldis. 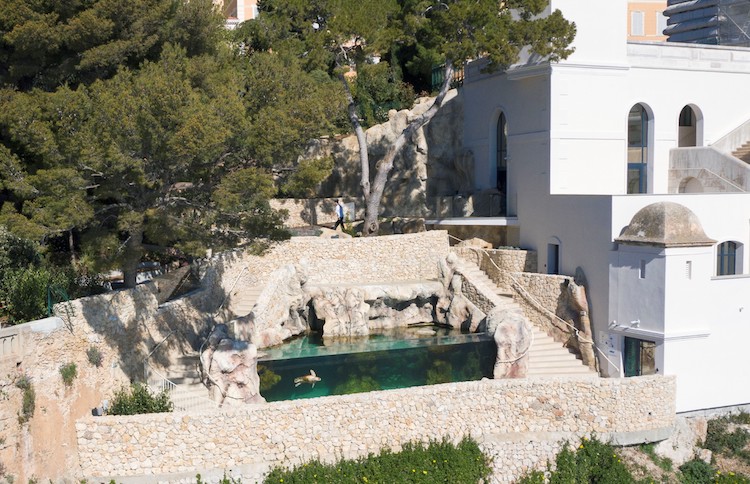 Why are Sea Turtles an Endangered Species?

Since the opening of the turtle centre in late April, visitor numbers – already pretty impressive year round – skyrocketed. Oftentimes, rather than following the original course of the exhibition, people ask to go directly to the turtle centre. Clearly, these prehistoric animals exert a strong fascination on old and young alike.

Sea turtles are an amazing species, not only for their resilience and ability to adapt to nature’s challenges, but also for their ability to navigate enormous distances over their lifetime to find food, breed, and nest. One monitored female leatherback turtle was observed to do a round trip of over 19,000 km (12,000 miles) across the Pacific. Science has not yet fully concluded how the mechanism works but it is thought that turtles are equipped with an internal “GPS” which helps them identify magnetic signatures of specific coastlines and allows females to travel back to the same beach they were born to lay their eggs. This is an even more astonishing feat given that it can take up to 30 years for a female to be capable of breeding.

And yet, it is us – who are alive today – who seem to cause their doom after a 240 million year course on this planet by destroying their habitat. Listed as an Endangered Species, they are at high risk at every stage of their development, and many of the threats are manmade. Over only the past two or three generations, their life on land, on the coasts or in the open sea has become one massive obstacle course: 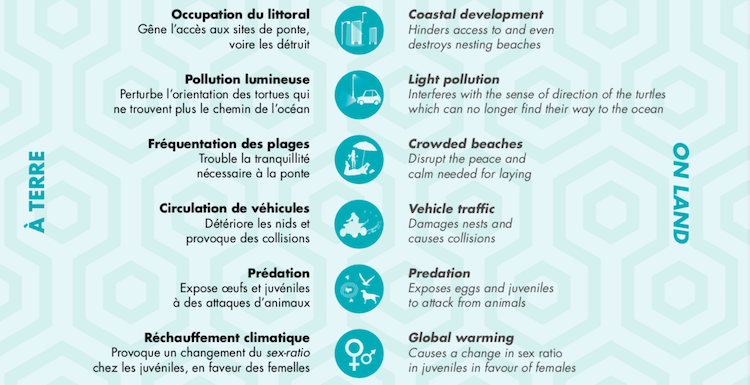 This means that these animals – vital to the marine ecosystem for hundreds of millions of years – could disappear from the world’s oceans in the course of this century.

What can we all do to save the turtles?

First and foremost, knowing is caring. This is why the Oceanographic Institute focuses on a pedagogic approach. While the space is informational enough to retain the interest of adults, it also playfully engages children of all ages in learning about the threats these vulnerable animals are exposed to over their lifespan that averages around 100 years, and how to mitigate the damage already done. A staff of educators is at hand to answer any questions and to explain how the Oceanographic Institute contributes to helping preserve turtles not just locally but as part of an international network. Guidelines how to deal with injured turtles you encounter in water or on land also help better manage their chances of survival.

Ever since the centre’s opening in late April 2019, it has proven to be a crowd magnet. Visitor numbers to the museum, already quite impressive at any time of the year, have been sharply up. In fact, before even going to the museum’s main floors, many visitors are looking immediately for the turtle space. Even celebrities like Monica Bellucci, en route to the recent Cannes Film Festival, stop by for a private visit. 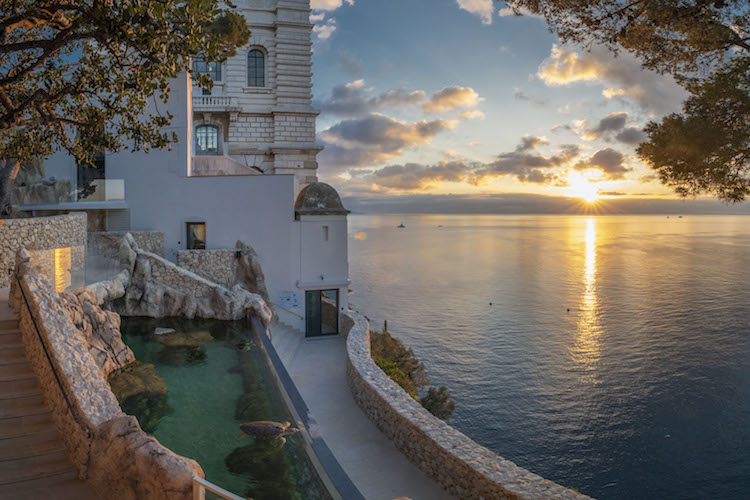 Apart from the new rescue centre, the museum’s main floor also presents a fascinating temporary exhibit on turtles, complete with a narrative and lightshow. A small but well-curated display of terrestrial turtles on the roof complements the theme. Beyond that, the museum has of course much more to offer, including its permanent exhibits and the current temporary show featuring the lives of three Grimaldi explorer princes. And no visit would be complete without a trip to the roof terrace where Alick Tipoti’s turtle-themed art work, a holdover from the sensational Taba Naba exhibit in 2016, is still on display.

As has been the case for many years, the Musée and Institut Océanographiques’ engagement for turtles, and vulnerable marine fauna in general, has been greatly backed by HSH Prince Albert II and the Princely Government, longtime proponents of environmental issues. Although specialized in the management of sea turtles, the centre – officially called Centre Monégasque de Soins des Espèces Marines (CMSEM) – has a versatile function and will be able to come to the rescue of other emblematic species of the Mediterranean such as hippocampi, mother-of-pearl shells, and groupers.

To plan your visit, go to the Museum’s website.

“Many of us ask what can I, as one person, do, but history shows us that everything good and bad starts because somebody does something or does not do something.”