Due to continuing works along the proposed Coulée Verte in the centre of Nice, the existing bus termini at Station J.C. Bermond are being relocated.

As of the 5th of November, 2012, the existing termini at Station J.C. Bermond in the centre of Nice (between avenue Félix Faure and boulevard Jean Jaurès) are being relocated, to facilitate major construction works being undertaken along the new Coulée Verte.

The terminus for bus lines 94, 200, 400 and 500 departing from Nice will now be relocated to the stop Albert 1er/Verdun (just opposite the rear of Théâtre de la Verdure). For these routes travelling back to Nice, the final stop will now be at the traverse Résistance et Déportation (adjacent to the old 200 terminus). 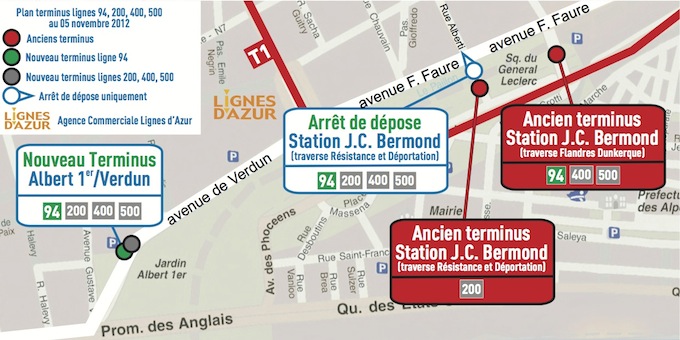 The 82, 100 and 100x bus lines also have a new temporary terminus, located on boulevard Risso, just across from Bibliothèque Louis Nucéra.