Street Art is suddenly becoming “a thing”. The small, quiet community of Mouans-Sartoux, a stone’s throw from Cannes, was an early and enthusiastic adopter years ago.

“Street art? That’s graffiti and the degradation of property by young testosterone-driven louts” … At least that’s what public opinion in France thought for the longest time. The fleeting nature of street art – or urban art, as some call it – means you can’t hang it in the Louvre or turn it into a statue. So, to the bourgeois mind it has little value. It took eons of time and international artists like Banksy or Victor Fraser to make urban art socially acceptable. On the French Riviera, however, one town pioneered it years ago, thanks to a group of dynamic doers and creators, and a municipal leadership that thinks outside the box. 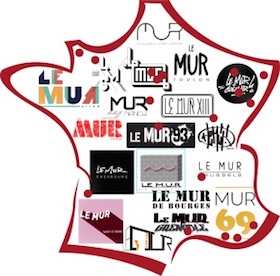 At the very origin of the changing perception of urban art is photographer and activist artist Jean Faucheur who along with a handful of supporters founded the original Le MUR association in Paris in March 2003. After that, other municipalities ventured out but it would still take years to establish street art as a “respectable” art form. “MUR”, by the way, is not only the French word for “wall” but also an acronym for Modular, Urban, Reactive.

By now, having understood that graffiti often borrows from established art such as industrial or comics, the broad public no longer looks down upon it. Several French cities have adopted a Le MUR spinoff. Le MUR de Mouans-Sartoux was initiated by Unwhite It, a local non-profit organization founded in 2017 to promote urban art. From 2018 on, the town has given urban artists the opportunity to produce their work on a 2.7m by 6.5m billboard situated in Allée Lucie Aubrac in the heart of Mouans-Sartoux. To date 12 performances have taken place, and many more are lined up. So far, this is the first and only MUR in the Alpes-Maritimes region.

Behind Unwhite It are three key people – Founding President Christophe Bondue, treasurer and communications guru Barbara Sesma, and Elise Borghino, secretary and educational manager. What connects them is their unique passion for urban art. But even with all their combined goodwill and energy, this ambitious idea could not have been pulled off without the help of a great team of enthusiastic volunteers, and participating artists … and of course the support of an open-minded municipal leadership who gave the idea both a chance and a physical address, and chipped some money in the proverbial hat.

The motivation behind this project was “the desire to show that street art is indeed more than just graffiti and lettering”, says Barbara Sesma. And indeed, the quality of the artwork is stunning, even if these ephemeral œuvres will be covered by another after a few weeks. Each artist is free to use their own techniques, mediums, or styles, whether acrylic, ink, aerosol, collages, or live performance, which gives the public the opportunity to enjoy a wide range of work.

As an informal “open-air museum”, Le MUR also creates a bridge between the neighbourhood, street art, and even generations. “There are, amazingly enough, a lot of seniors who are interested in this art form,” Barbara informs.

How come that of all places, the small town of Mouans-Sartoux, pop. 10,000, is at the cutting edge of urban art? “Our community is, and has been for the last 40 years, one which has embraced a culture different from that in other regional communities. It is “green”, open-minded, and readily adopts unique arts projects. We have for instance the annual famous Literature Festival. Mayor Pierre Aschieri and Marie-Louise Gourdon, the municipal councilor for culture, are very obliging in every way. But it’s really the whole municipal team that supports us, which is great.” The community helps with subsidies, Barbara explains, and otherwise projects are financed through memberships and donations. 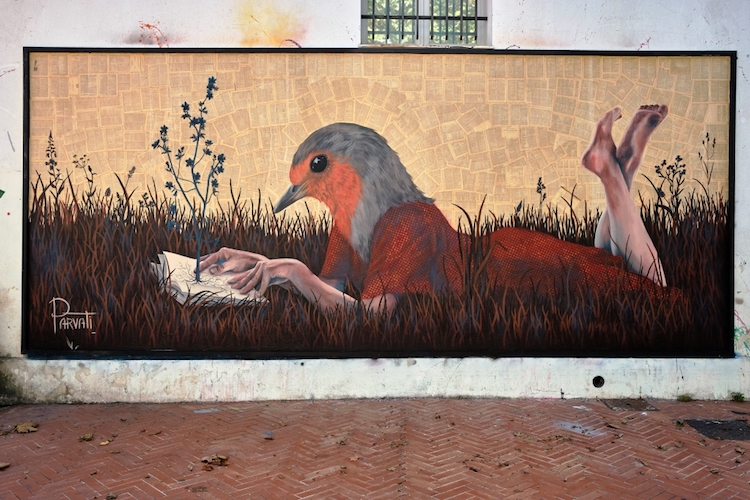 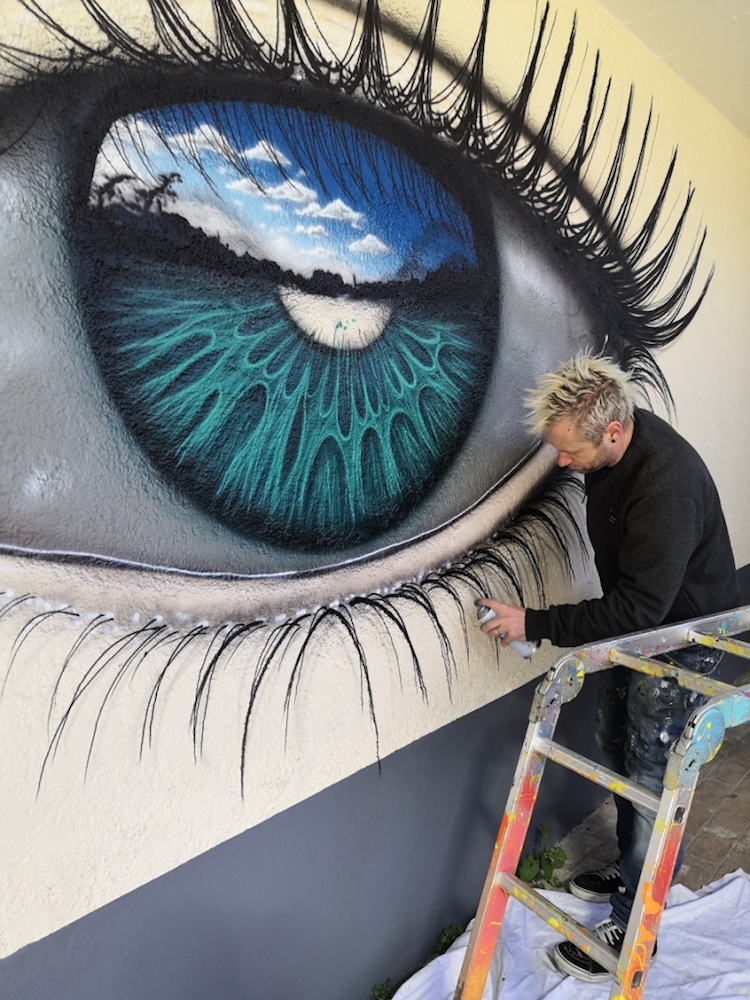 Barbara Sesma has a personal interest in this art form. ”I discovered cities through street art and discovered street art through cities. When I moved to the French Riviera several years ago I realized that it was quasi non-existent here. So I decided to take matters in my own hands.” Her goal, apart from giving artists a brick canvas: to help cities and villages to find an identity by distinguishing themselves from others with unique works and through art that is accessible to all.

And she teamed up with the perfect person to pull this off: her partner Christophe Bondue has an international background, including living in Australia for a year where street art is part of the urban landscape. His passion and knowledge about the street art scene and his artistic curiosity are real levers for carrying out novel projects on the French Riviera. Today, he serves the association as its president. He is also the one who coined the association’s leitmotiv, based on a line of a famous Louis Armstrong song, “And I think to myself, what a colourful world…”

Within the first three years of its existence, an impressive roster of French and international street artists have left their temporary imprint on the wall. Just recently, at the end of 2020, Unwhite It featured Anna Conda, a Russian street artist who lives in Paris. Her work revolves around her very personal connection with animals and nature, and she seamlessly mixes different cultures. The dreamy, poetic, and calming quality of her mural hit the perfect note in a world that is currently in great disarray.

Other artists in 2020 included well-known performers like Indo-French urban artist Parvati and her trademark mélange of human figures with bird heads, Barcelona-based Tim Marsh, dubbed “the geometrical acrobat”, and Asur from Portugal, known for his masterful combination of realism, retro and wildstyle. And the 2019 highlight was Cannes’ very own urban artist, Olivia Paroldi who remasters classic artistic techniques into a fresh and modern style and is on the way to international fame. 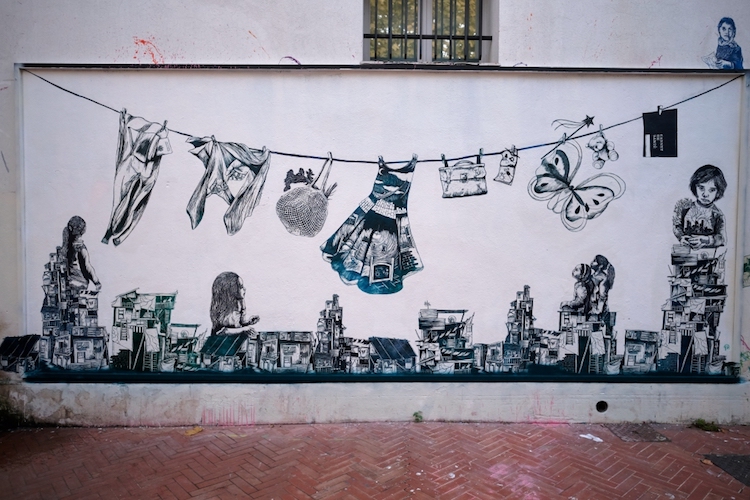 2021 is also off to a great start with the upcoming visit in February of Primal, an artist from the famous Atelier Triptyque in Montpellier. His work has a Daliesque quality of the surreal, meeting the quirky and the unsettling. The complexity of a tormented spirit that is represented in his work may very well be seen as the reflection that the looking glass throws back at today’s society.

And because pavements could use some colour, too, Unwhite It also founded a Chalk Festival in collaboration with renowned urban artist Jérémy Besset. The May 2018 inaugural edition brought together more than 400 artists, young and old, in the streets and squares of the historic centre for a marathon of creativity, fun, union … and was so successful that the public demanded a repeat, and the town of Saint-Raphaël copied the concept.

If you are a budding or established urban artist and feel like participating, nothing is easier than that … although this year’s calendar is already packed to the gills. However, you can apply through the form on the website for 2022.

Information for making a donation or becoming a member is available on the association’s website. 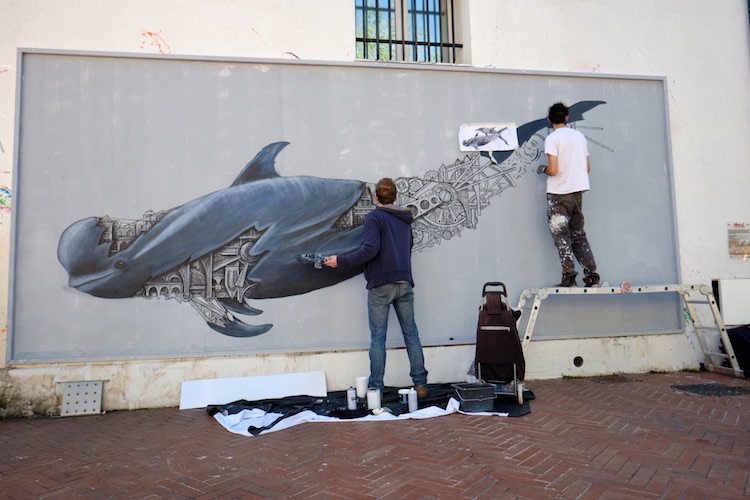