You have seen every possible version of French stage classics? No – unless you have seen Société Miranda’s Dom Juan.

A few weeks into the annual Rivieran summer festival season, a veritable firework of entertainment has been raining down on us. Hard to pick favorites among the hundreds of quality performances – but if we had to, Molière’s Dom Juan, superbly produced and played by Thierry Surace’s Société Miranda, would rank way up high.

Dom Juan… if you know your French plays, you’ve most likely seen it before….. but wait – this is not just another rehash of the famous topic, but a complete overhaul, in a clown version. Yes, we did say clown!

Molière being Molière, French theatre pays due homage and reverence to its undisputed God of All Things Literature and Theatre. But along came gifted stage director Mario Gonzalez, a native of Guatemala who – although equipped with a profound sense of appreciation of French culture – felt entirely unemcumbered to tackle the venerable idol’s work. The outcome is an adaptation that sees comedy in tragedy, and tragedy in comedy…. And what better medium to translate that message than via clowns, the one artistic entity with a time-honoured licence to speak truth, to point out the obvious where others dress up the naked emperor? An entirely new, refreshing, and unexpected take on the original. That is true Molieran spirit.

This play has been presented on stage several times before, and to great success, notably at the Théâtre de la Cité in Nice which is Société Miranda’s home. But in its open air version, in the majestic square of the historic 11th century Roquebrune castle, with the dramatic background of the Mediterranean Sea, the text takes on yet another… an almost metaphysical… dimension of depth. But it’s the metaphysics of clowns – sad and funny at the same time. 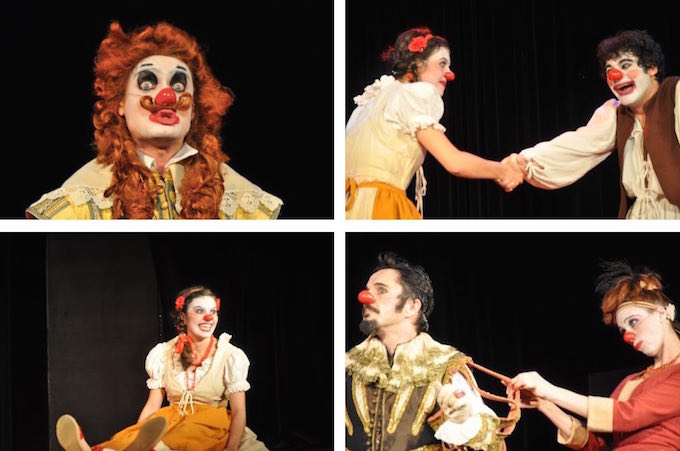 The cast features some of the best that Nice has to offer these days: Florent Chauvet, Eva Rami, Elodie Robardet, Sylvia Scantamburlo, Jérôme Schoof, Christophe Servas, and Thierry Surace.

Do make sure to catch this delightful play in the spectacular open-air setting of the Roquebrune Castle for its only performance on July 29. For more details and ticket purchasing info, go to the Société Miranda website.