400 years after the greatest French playwright’s birth, adaptation of his plays abound. But few are as original – and timely – as the one that Collectif La Machine presents at Anthéa right now

In the remarkable talent pool of Niçois artists, actor-director Félicien Chauveau and his Collectif La Machine counts among the cream of the crop, and rightfully so. The company’s artistic journey over the past eight or so years, backed both by Théâtre National de Nice and Anthéa Théâtre d’Antibes, has been astounding. Chauveau’s confidence and savoir-faire in tackling the most complex classical texts and giving them a 21st century makeover is nothing short of amazing. No wonder therefore that the ambitious and uber-talented artist has zeroed in on Molière to honour the beloved French author’s 400th birthday. Currently playing at Anthéa, Le Bourgeois Gentilhomme (The Bourgeois Gentleman, also sometimes translated as The Would-Be Gentleman) is as faithful to its author’s spirit as it is to the far-out Collectif La Machine production.

Like most of Molière’s pieces, Le Bourgeois Gentilhomme is a humorously packaged biting satire. It was commissioned in 1670 by King Louis XIV in order to mock the Ottoman ambassador Suleiman Aga, who the Sun King thought to show disrespect to his hosts when he was received at the French court in Versailles. It is a general commentary on social climbing: its hero, Monsieur Jourdain, is a pretentious, nouveau-riche Frenchman from a humble background who desperately seeks to become an accepted member of the nobility. Although he takes resort to many a ruse, it will be him at the end who is fooled. In the original play, a certain Jean-Baptiste Poquelin played played the role of Monsieur Jourdain – better known under the name of Molière. 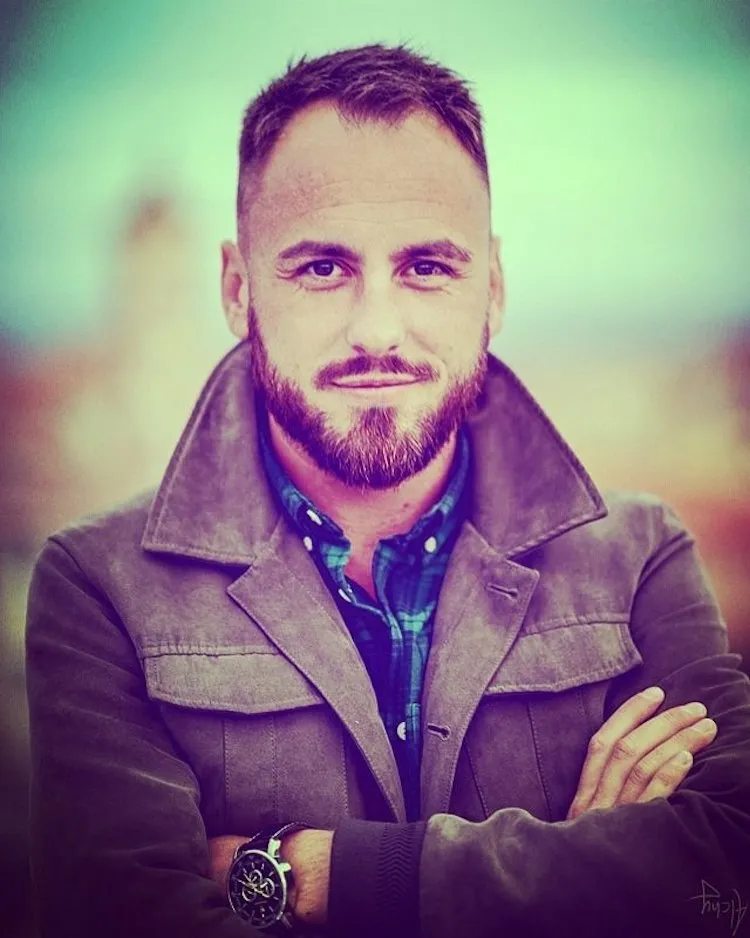 Chauveau transposes the play to our current times, and the theme is eerily on topic:

In his adaptation, Mr Jourdain is a smalltime politician who will do anything to adopt the airs of respectability and win the next elections. Like any good outsider, he hires various coaches to polish his image and shine in front of crowds. Following the principle of his Master of Arms, “in order to defeat one’s opponents, you must give and not receive”, the candidate is sure he has what it takes to succeed.

But his opponents are ahead in the polls. Jourdain’s family, tired of seeing him ruin himself in this vain pursuit, makes him believe that he is winning the election and that the Turkish ambassador is sending for him. Jourdain is delighted… but how far can the deception go? And when does one move from intimate farce to historical drama? 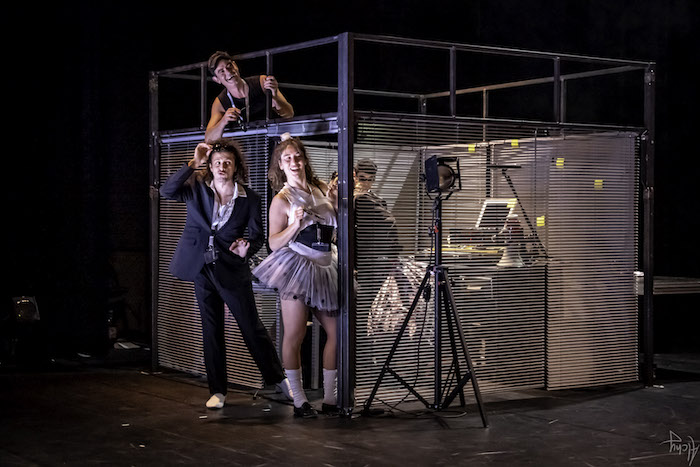 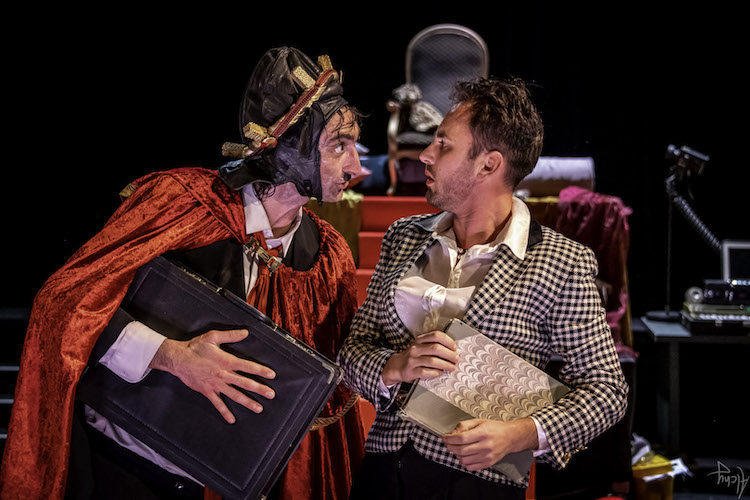 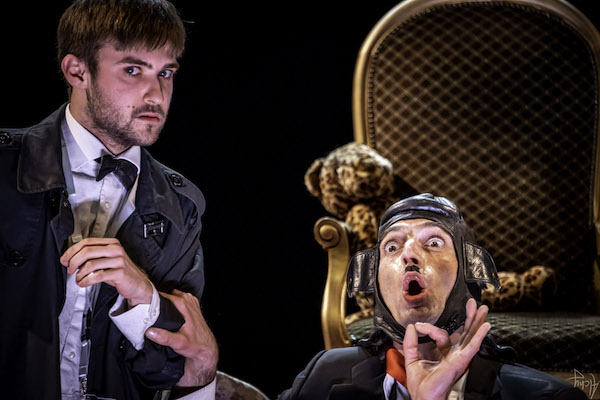 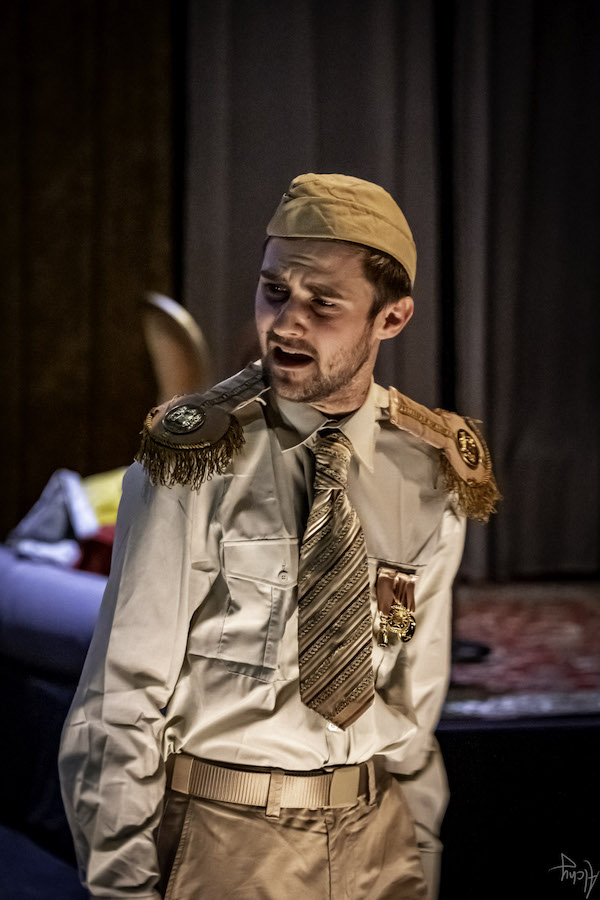 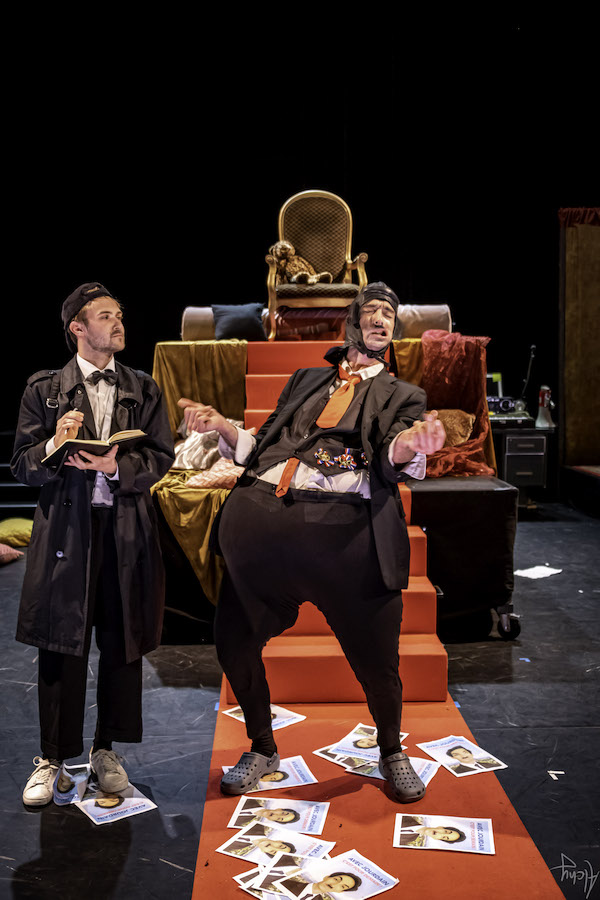 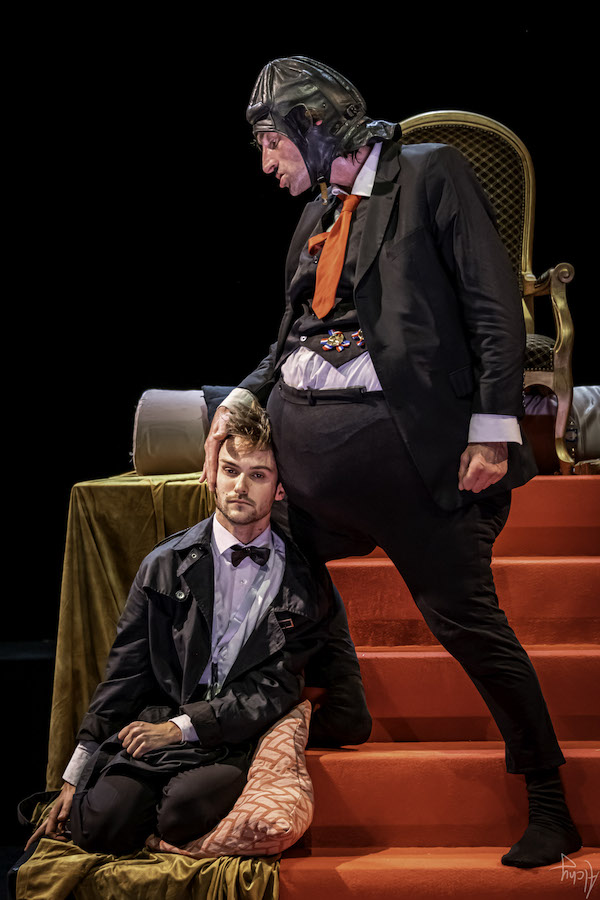 Is it a twist of fate or intention that this play comes hard at the heels of the French presidential election campaign in April 2022? In fact, no room for conspiracy theories here: La Machine planned out the programming schedule for this piece in 2021, well before it was known that the presidential elections, originally to be held in May 2022, were brought forward by a month. For Félicien Chauveau it was never a question of expressing a political stance but he sees it from the artistic side, as the story of “a perfect alignment of the stars to orchestrate a predicted and feared disaster: Monsieur Jourdain as president.”

Mr Jourdain, Chauveau explains, is a clumsy character, bloated with egotism, constantly out of step with the world around him, and trying to look like a Shakespearean Julius Caesar. And yet, despite his skills, he will never achieve the regal demeanour he so covets. “Today, this text, written in 1670 for the court of Louis XIV, is still pertinent, intact, frozen in this immortal mirror of human vanity. What an opportunity to echo our contemporary times in a playful and sometimes frightening way,” the director says.

Fascinated by the timeliness of the play in so many ways, we wanted to dig a little deeper and asked Félicien Chauveau on his views on the topics at hand – the current state of political affairs, and Molière as the light bearer of French literature, four centuries on:

We just had presidential elections in France, during which the subject of culture was not discussed much. What would you like the government to do during the next five years for culture in general, and the theatre and the performing arts in particular?

It’s up to the theatre to save the world and not the other way around, isn’t it?

Why is it necessary to give culture an important place in our daily lives and our society today?

Culture allows for exploration, travel, encounters, but also and above all escape and freedom.

What is it about Molière that inspires you?

Molière brings his contemporaneous times to the stage, which is actually quite innovative. This is the soul of his theatre, he holds up a mirror in which the so-called great and good of the world, especially the court of Louis XIV – and Louis XIV himself – can look at themselves and laugh. It is therefore an extraordinary playground if one understands Molière as a psyche. He stages “L’Avare”, “Le Misanthrope”, “Le Malade Imaginaire”, and other monomaniacal characters (like Quixote, whose two volumes I adapted for the theatre in 2015).

Moreover, Molière, and especially Madeleine Béjart, worked on adaptations of “Le Quichotte”. These obsessive characters highlight a humanity that is at once alienated, drunk with itself, but also traumatised by the society and the system in which it vegetates, slowly dying. And yet, in spite of this cold, difficult and realistic vision, Molière never forgets to remind us that at the heart of the mechanics of his plays there are first and foremost figures, characters, individuals – in short, human beings.

Written in the 17th century, are Molière plays still relevant for young people like you?

I don’t know if you can say I’m young anymore, I am in my mid-thirties. In any case, when I was young, I was impressed for a long time by Molière, whose language we are taught at school. The monument that was “Molière” seems so massive, colossal, unapproachable, that for a long time I was intimidated it.

But by taking an interest in his life and especially in his beginnings (for the writing of a new show entitled “le Temps Des Trompettes” created by the Théâtre National de Nice CDN in June and then at the Théâtre du Chêne Noir in Avignon this summer) I realised that I was dealing with an author, a troupe leader, an actor, a man of the theatre with his exaltations, his outbursts, his friendships, his sense of community, his troubles, his loves, his difficult constraints, his negotiations, his protectors – in short, I was dealing with a reflection of myself, just as every theatre-goer who is interested in Molière finds themselves in him.

So yes, Molière is still relevant, through his plays; he denounces the “Tartuffes” and the Bourgeois who dream of being “gentlemen”, and in a visionary way, he evokes the great social and political problems which will mark out the four centuries following his death. 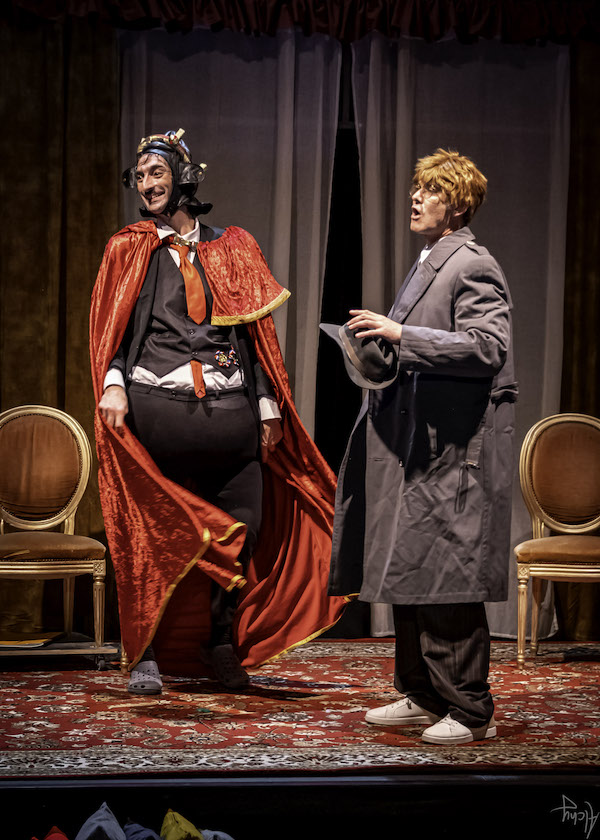 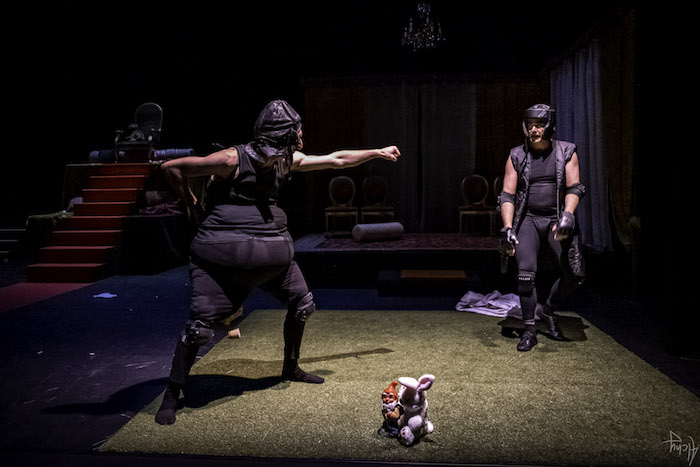 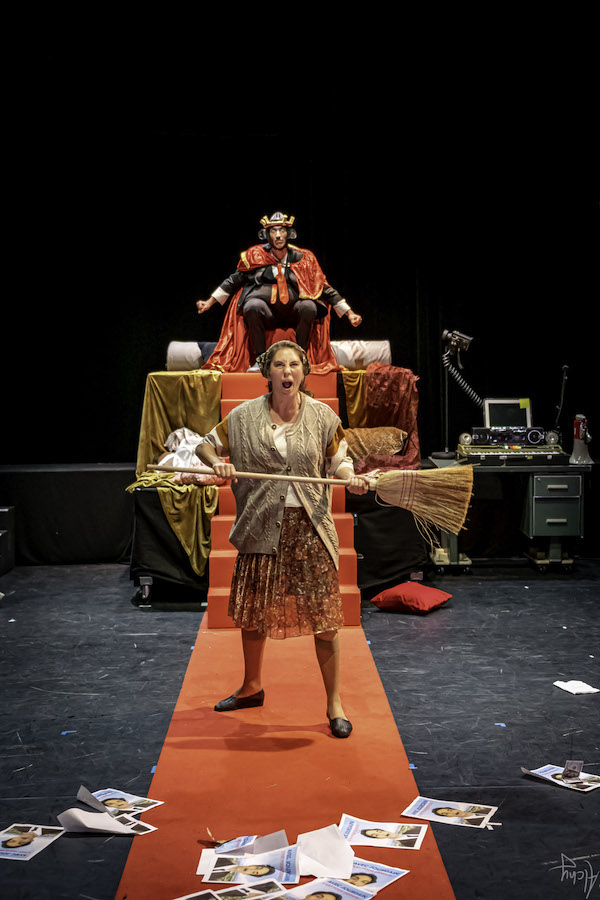 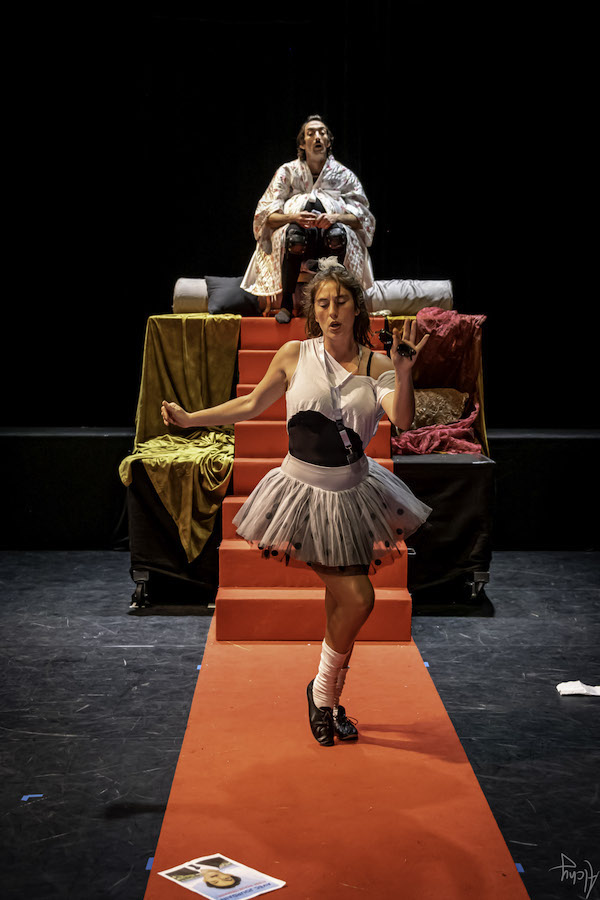 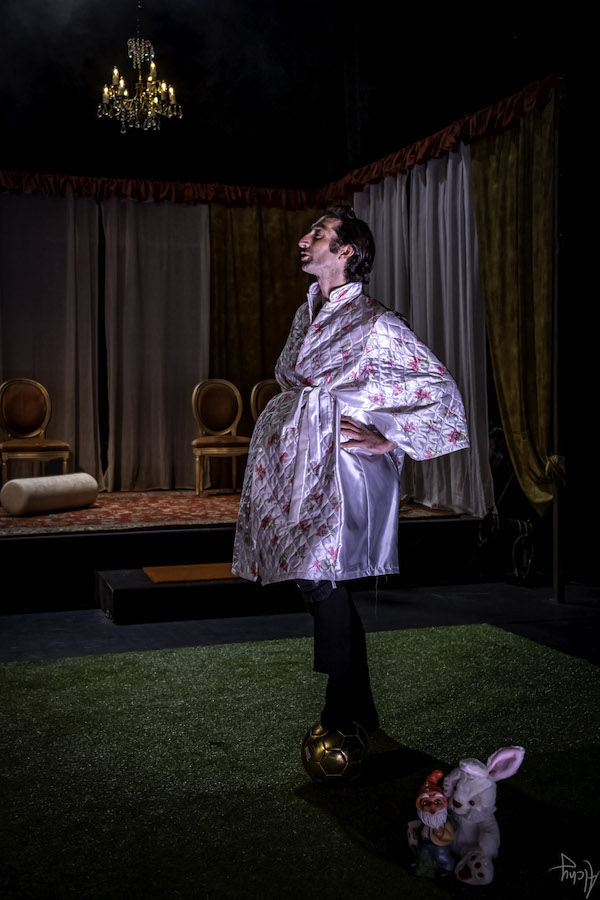 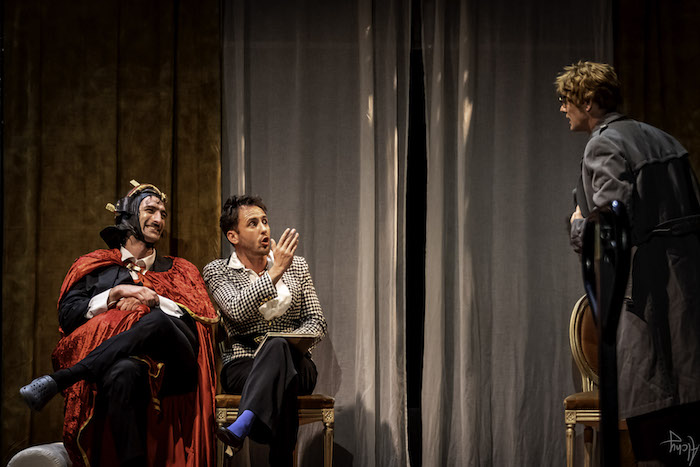 As always, Félicien has assembled a phenomenally talented cast, many of which are longtime collaborators. Guillaume Geoffroy who frequently plays the lead roles in Collectif La Machine’s productions, slips in the shoes of Mr. Jourdain. He says of his character, “Mr Jourdain is a child king in the body of an adult, selfish and capricious, who owes his wealth only to the work of his parents. Mocked and ignored by others throughout his childhood, he has a burning desire to be respected and admired by his peers by any means possible. In spite of himself, he will make those around him carry the heavy weight of his dream.” 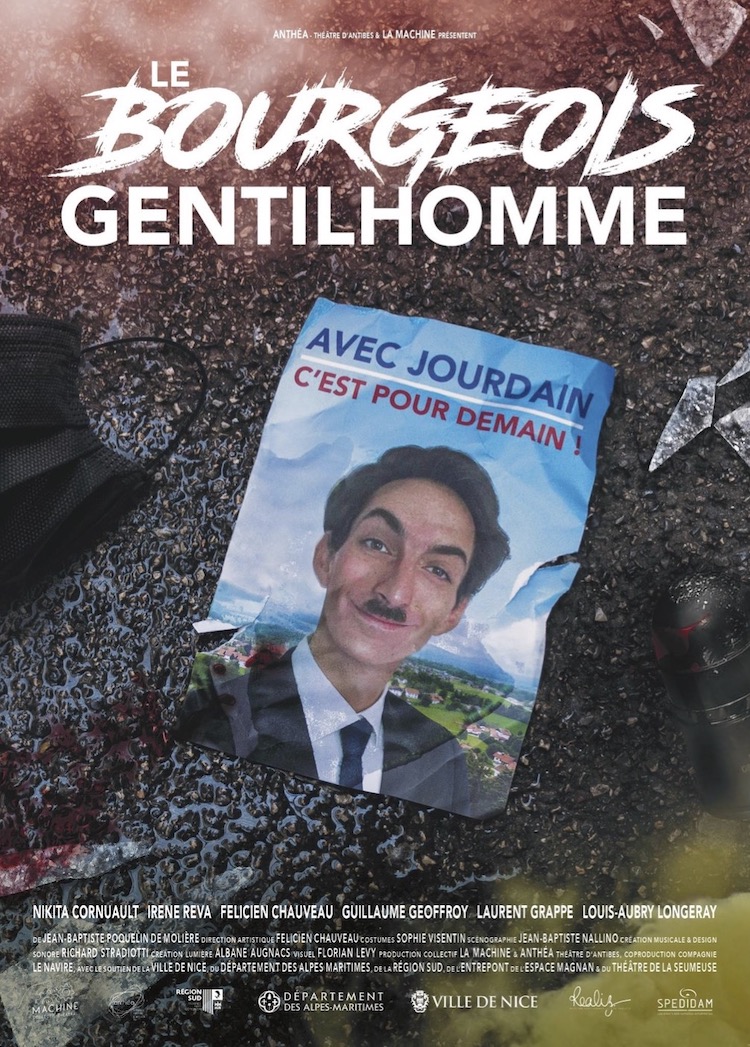 Le Bourgeois Gentilhomme premiered at Anthéa in Antibes on April 27 and will play there through May 13. Go here for dates and ticket booking information.