What could be better than listening to baroque church music? Especially when it comes to cantatas by Johann Sebastian Bach and Georg Philipp Telemann.

I had the special pleasure of listening the first album from the world premiere of Telemann’s so-called `Französischer Jahrgang` at a fitting venue. In the large salon of a chateau on the upper Loire near Nevers.
The red marble fireplace flickered, a large mirror with a gilded frame reflected the light of the candles. The wood smelled fragrant and a tannin-rich red wine, unfortunately from Bordeaux, I had to save somewhere, was delicious. Outside, rain was falling over the land. Then the chorale `Jesu meine Freude` resounded, the music floated to the high stuccoed ceiling, in an aria time throbbed in clocking figures in the strings. And everything seemed eternal.

French overtures surged gravitationally and motetic choruses pleaded pathetically to God, as if I were at Versailles in the castle church with grand motets by Campra, Lully or Delalande. Fine-voiced fugues, elegant duets and arias, word-explaining recitatives of rhetorical quality that only a poet-composer like Telemann could write. But all in German.

The musical style of this vintage makes use of the gout français and mixes it with Italian gusto.

Telemann was francophile, which was en vogue in the 18th century. With him, however, it was more than a fad.
“Je suis un grand partisan de la musique francaise je l’avoue”, he wrote. Already as chapel master to the Imperial Count Erdmann von Promnitz zu Pless und Sorau, the young Telemann eagerly studied the music of Jean Baptiste Lully and drew inspiration for his instrumental music. In Eisenach, under the Duke of Saxe Coburg Eisenach, Telemann composed his first complete set of cantatas, `Das geistliche Singen und Spielen`, for the church year 1710/11, predominantly in the Italian-German style.

It was not until his time as music director at Frankfurt am Main that Telemann wrote the so-called Französischer Jahrgang (French year) for the church year 1714/15. Already in episode 1 the instrumentation is ingenious, typical Telemann, there are arias with four flauti dolci and with three bassoons as accompaniment. 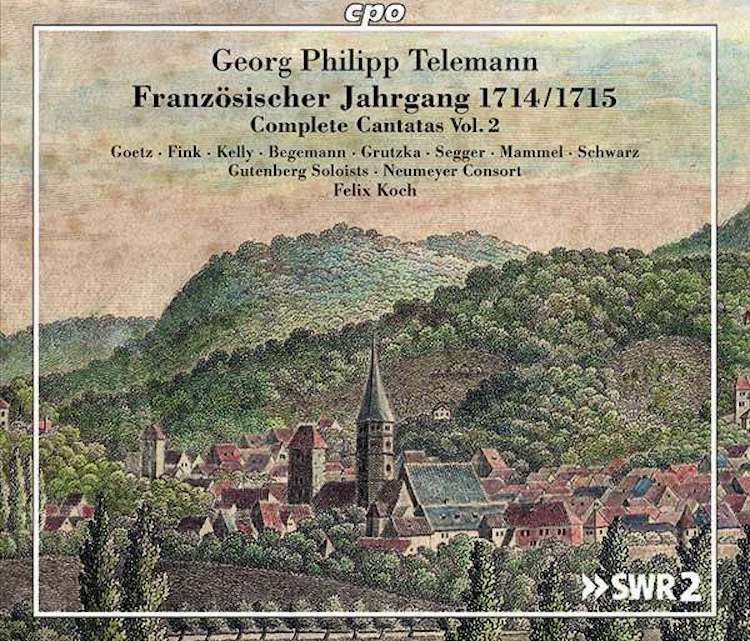 Now Vol 2 has been released on CD.

The conductor is again Felix Koch with great expertise, style and a sense for exquisite details.

The Neumeyer Consort plays on historical instruments or replicas with accuracy, warm sound and pulsating affect. The chamber choir of the Gutenberg Soloists sings.

Among the vocal soloists are experienced masters of their craft, including Gotthold Schwarz, a Cantor of St. Thomas in the flesh, who is no longer in office. Bach was impressed by Telemann’s music. Telemann was his friend and godfather. Bach obviously knew Telemann’s early years and was inspired by them, which is what can be heard. They are also joined by Hans-Jörg Mammel tenor, a well-known figure.

Excellently harmonised chorales, recitatives partly with arioso and a floating tercet en rondeau as if from a tragedie lyrique with a following densely worked but elegant fugue make this a bijou, which is convincingly polished by the interpreters.

In the church piece ´Unschuld und ein rein Gewissen`, the French idiom comes to the fore in the chorus: “Befiel dem Herrn Deine Wege” in enharmonic polygonal returns that do credit to the contemporary Jean Philippe Rameau.

Three cantatas on Easter are particularly impressive. The first, `Christ ist erstanden´, begins with a rushing overture à la française into which an archaic chorale is built, followed by a swift fugato. Bach may have been inspired by such pieces. One thinks of his Advent cantatas “Nun komm der Heiden Heiland” von ihm. Not to mention other delicacies. Like joyful dancing arias. Here, angels themselves seem to dance and smile. Very consoling music.

In the second Easter cantata, an echo aria and the courtoise final rondeau with solo choir and orchestra are captivating.

A chorus and final scene in the cantata for the third Easter are particularly poignant.`Jesus Christus unser Heiland`. First the chorus with several sections and chromatic reversals and polyphonic density, and then the aria for bass and choir “Bringt mich immer zu der Ruh”. This music almost sounds like Johannes Brahms with its elegiac pathos, one suspects the German Requiem or, the paradox may be allowed, an orthodox church music by Sergei Rachmaninov turned into the Lutheran.

The large-scale cantata with trumpets and timpani “Wertes Zion sei getrost” is very festive. Beginning with a duet more reminiscent of Arcangelo Corelli and ending with a jubilant Hallelujah in rondeau form, it combines French and Italian spirit. A large dramatic choral scene is taken as if from a Lully opera.

The opening chorus to “Wir liegen großer Gott vor Dir” is full of tension and dissonance.

And the two variations of ‘Ich weiß, daß mein Erlöser lebt’ are also full of musical treasures, reminiscent of the aria from Handel’s Messiah. I know that my redeemer liveth.

In short, this double CD is highly recommended to all fans of baroque church music.