Originally intended to run for three performances as of 1st November, Akhnaten wasn’t able to be performed in front of an audience, due to the enforced closure of theatres during the November lockdown in France. The production did, however, go ahead and was filmed for screening online, enabling not only local audiences to enjoy it, but audiences around the world as well.

Created in 1984, Akhnaten is the third of a trilogy of Glass’s operas inspired by important personalities or great moments in history – the preceding works being Einstein on the Beach, written in 1976 and directed by Robert Wilson, and Satyagraha, a 1980 work which traces Mahatma Gandhi’s development of non-violent protests as a political tool. Akhnaten premiered at the Staatstheater Stuttgart on the 24th of March, 1984.

Philip Glass is regarded as one of the most interesting and versatile composers of his time. In addition to his operas, symphonies, and compositions for his own ensemble, he has collaborated with a wide range of artists – from Twyla Tharp to Allen Ginsberg, Woody Allen and David Bowie – he has written music for experimental theatre, and scores for Academy Award-winning films such as Stephen Daldry’s The Hours and Martin Scorsese’s Kundun. He also wrote the score – performed by the Philip Glass Ensemble – for Godfrey Reggio’s Koyaanisqatsi, described on Glass’s website as “an apocalyptic vision of the collision of two different worlds — urban life and technology versus the environment”.

The collaboration between Lucinda Childs and Philip Glass goes back a number of years. She appeared in Glass and Wilson’s Einstein on the Beach – for which she won an Obie Award – and subsequently appeared in Glass’s opera White Raven, as well as in a number of Robert Wilson productions. Philip Glass composed the score for her 1979 work Dance, for which Sol LeWitt designed the décor. Childs has choreographed over thirty works for major ballet companies – including the Paris Opéra Ballet and Les Ballets de Monte-Carlo – and has directed and choreographed a number of contemporary and 18th-century operas, including Gluck’s Orfeo ed Euridice for the Los Angeles Opera, Mozart’s Zaide for La Monnaie in Brussels, Stravinsky’s Le Rossignol and Oedipe, Vivaldi’s Farnace, Handel’s Alessandro, and John Adams’s Dr Atomic for the Opera du Rhin.

In a first for France, and due to the current health crisis, Lucinda Childs conducted rehearsals for Akhnaten by videoconference on a large screen, from one continent to another. As a result, the Direction of the Opéra de Nice has placed digital technology at the heart of this production – a challenge for both the artistic and technical teams. 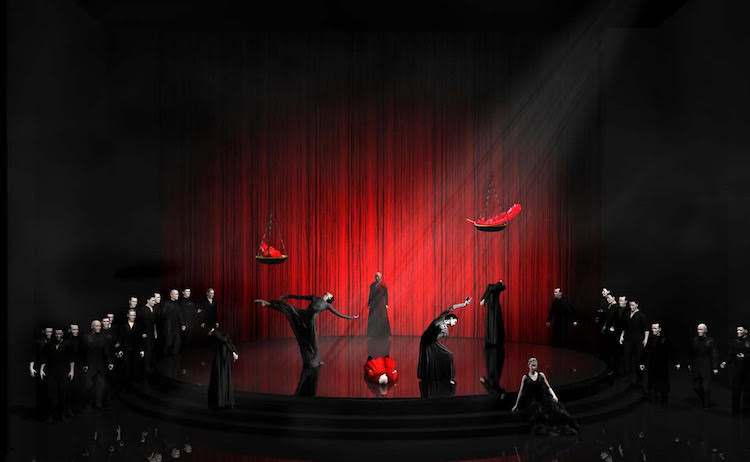 Akhnaten is set in Ancient Egypt, and based on the accession to the throne of the pharaoh Amenhotep IV – thought to have been around 1351BC – on his religious convictions, and the consequences of his actions. Presented as a combination of song, dance and music, the opera has a libretto by Philip Glass, Shalom Goldmann, Robert Israël and Richard Ridell, with the text drawing on ancient hymns, prayers and inscriptions, sung in their original Egyptian, Hebrew and Akkadian form.

At the funeral of Amenhotep III, his son, who is crowned the new pharaoh, announces his intention to change his name from Amenhotep IV – “spirit of Amon” – to Akhnaten – “spirit of Aten”. He also leads a revolt to banish the existing religion in the country, and replace it with a monotheistic one in which the sun god is to be the sole divinity of Egypt. He banishes the priests of Amon and forms the new order of Aten. 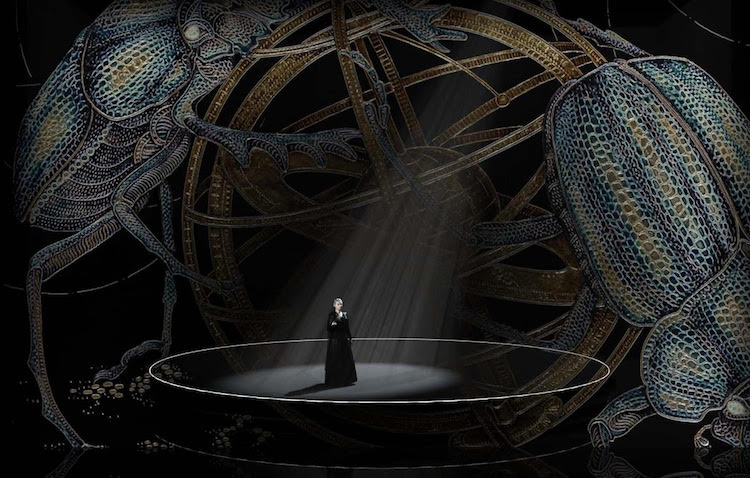 The new city of Akhetaten – “the City of the Horizon of Aten” – is built in praise of the new religion, and there Akhnaten, his wife Nefertiti, their six daughters and his mother, Queen Tye, live an insular life. Queen Tye, however, is uneasy, sensing the unrest which is growing outside the city walls. Crowds begin to gather outside the gates, and letters arrive, expressing increasing concern at the self-imposed isolation in which Akhnaten and his family live. The banished priests of Amon emerge from the crowds and break through the palace doors, and in the ensuing melee, Queen Tye, Nefertiti and her daughters are drawn into the mass of protesters. Akhnaten is killed.

Akhnaten’s son, Tutankhamun, is crowned the new pharaoh, and the polytheistic religion of Egypt is restored. In the Epilogue to the opera, the ghosts of Akhnaten, Nefertiti and Queen Tye are heard from the ancient world.

The title role will be sung by Martinique-born countertenor Fabrice Di Falco. Often called the ‘Creole Farinelli’, he has been praised by music critics for the quality of his pure timbre and the breadth of his repertoire which ranges from baroque to jazz, to musical comedy, and contemporary music where he uses both his male soprano and his baritone voice. He has appeared in a number of renowned international festivals, and among his opera performances was the role of Oberon in Britten’s A Midsummer Night’s Dream at the Nice Opera House, which he also sang at the Teatro Colón in Buenos Aires, at Metz Oper and Dubai Opera. 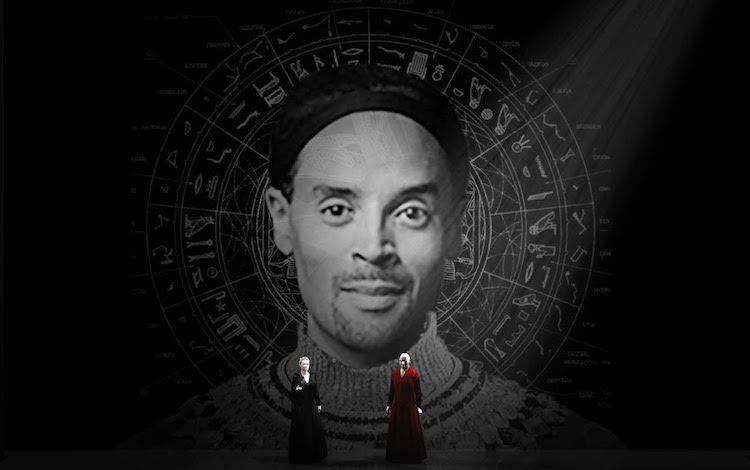 French mezzo-soprano Julie Robard-Gendre takes the role of Nefertiti. Ms Robard-Gendre has appeared in major opera houses across France – including Opera de Rennes in which she sang the title role in Bizet’s Carmen, broadcast live across the country – as well as appearing in Dvořák’s Rusalka for Opera Monte-Carlo, and in Mozart’s Die Zauberflöte and Meyerbeer’s Les Huguenots at the Paris National Opera.

Queen Tye is sung by Italian soprano Patrizia Ciofi whose career has taken her to some of the world’s major opera houses including La Scala, Milan, the Royal Opera House, Covent Garden, the National Opera of Paris, and the Vienna Staatsoper. Her repertoire includes appearances in Verdi’s La Traviata and Rigoletto, Mozart’s Le Nozze di Figaro, Strauss’s Der Rosenkavalier and Bellini’s I Capuleti e i Montecchi and La Sonnambula. 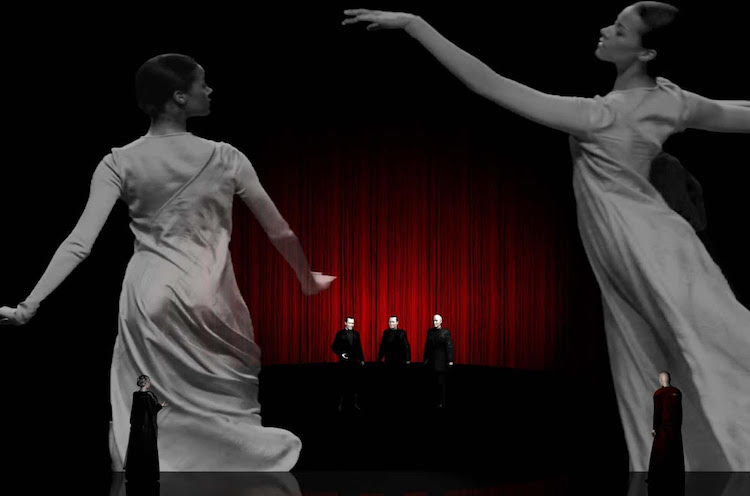 Also in the cast are Joan Martín-Royo as Horemheb, Frédéric Diquero as the High Priest Amon, Vincent Le Texier as Aye, and Lucinda Childs in the speaking role of Amenhotep. The six daughters of Akhnaten are danced by students of the Rosella Hightower National Dance Centre.

The Nice Philharmonic Orchestra is led by Léo Warynski known for his appearances in the symphonic, lyric and vocal repertoires He is musical director of the Multilatérale Ensemble, the professional vocal ensemble Les Métaboles – which he founded in 2010 – and Mécénat Musical Société Générale.

The Chorus of the Opéra de Nice is directed by Giulio Magnanini, choreography is by Lucinda Childs and Eric Oberdorff, set and costumes by Bruno De Lavenère, lighting by David Debrinay and video by Etienne Guiol.

Philip Glass’s three-act opera Akhnaten – with prologue and epilogue – is produced as part of the Festival MANCA Nice. With French and English subtitles, the opera in its entirety can be viewed here…