Jules Verne’s “20,000 Leagues under the Sea” has become a reality. A British marine archaeologist and historian has helped make it happen. And now you can be part of the adventure, too.

Shipwrecks, pirates, and treasure! Who isn’t instantly channeling their inner ten-year-old adventurer upon hearing these words? Well, Dr. Sean Kingsley doesn’t need to. These words are his professional reality. He is a leading marine archaeologist and historian who has been “digging it” for around 30 years, carving out a solid international reputation in the process. Already a well-known TV personality and sought-after advisor on lauded international documentary series like Enslaved, he is also a writer and editor, and has recently launched a new venture to share the excitement of underwater discoveries with the world: his new popular Wreckwatch Magazine – the only one of its kind worldwide – is a must-read for armchair divers and anyone interested in what lurks beneath. 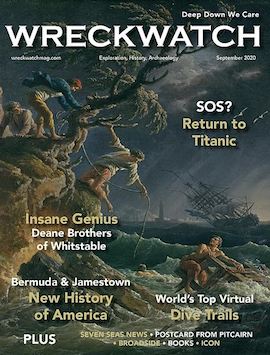 It’s all in the name, and Wreckwatch does exactly what it says. It keeps an eye on the sunken past, its history, cultural value, and conservation for future generations. But if you think this is a technical, scientific periodical for nerds, you could not be further from the truth. Yes, there is an educational element to it but in the most entertaining way possible. To understand what makes the magazine such great fun, you need to meet its creator. But as behooves a maritime scientist, we’ll need to do a deep dive to even scratch the surface of this multifaceted man and his fascinating profession.

First, do away with the notion that historians and archaeologists are old, anti-social guys shod with faded Glory sandals, perusing thick volumes of dusty tomes in their cobwebbed studies. Sean is the complete opposite. Yes, the native Londoner is genuinely booksmart – he has a doctorate from Oxford University and a CV that is several nautical miles long! – but that’s where the similarities with your stereotypical researcher end. Sean is youthful, dynamic, athletic, cool, charming, suave, and a goldmine of the best anecdotes you’ll ever hear, delivered in his polished British accent and in that specific way that has earned his fellow countrymen their reputation for a terrific dry sense of humour. And he is – of course – a diver himself who has extensively explored waters near and far since his early youth. 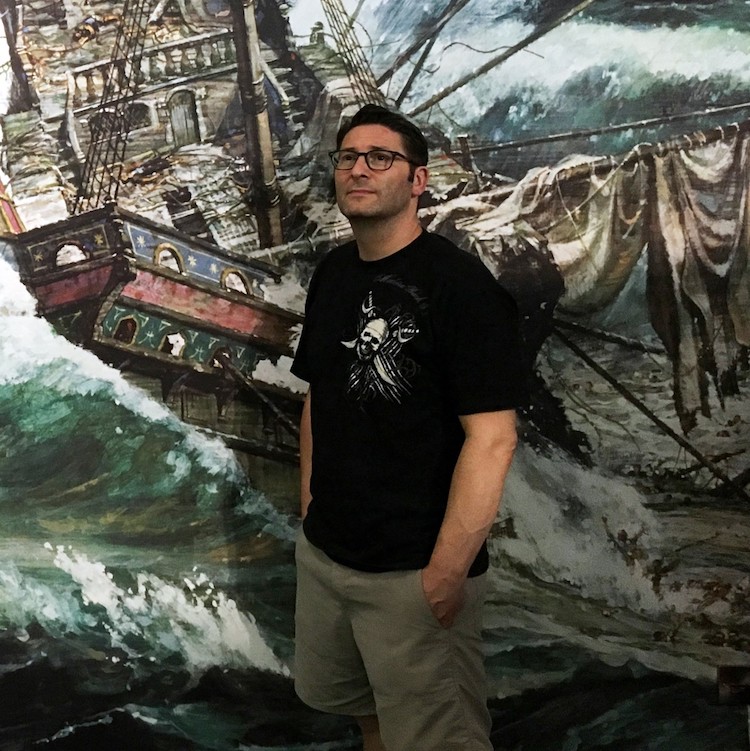 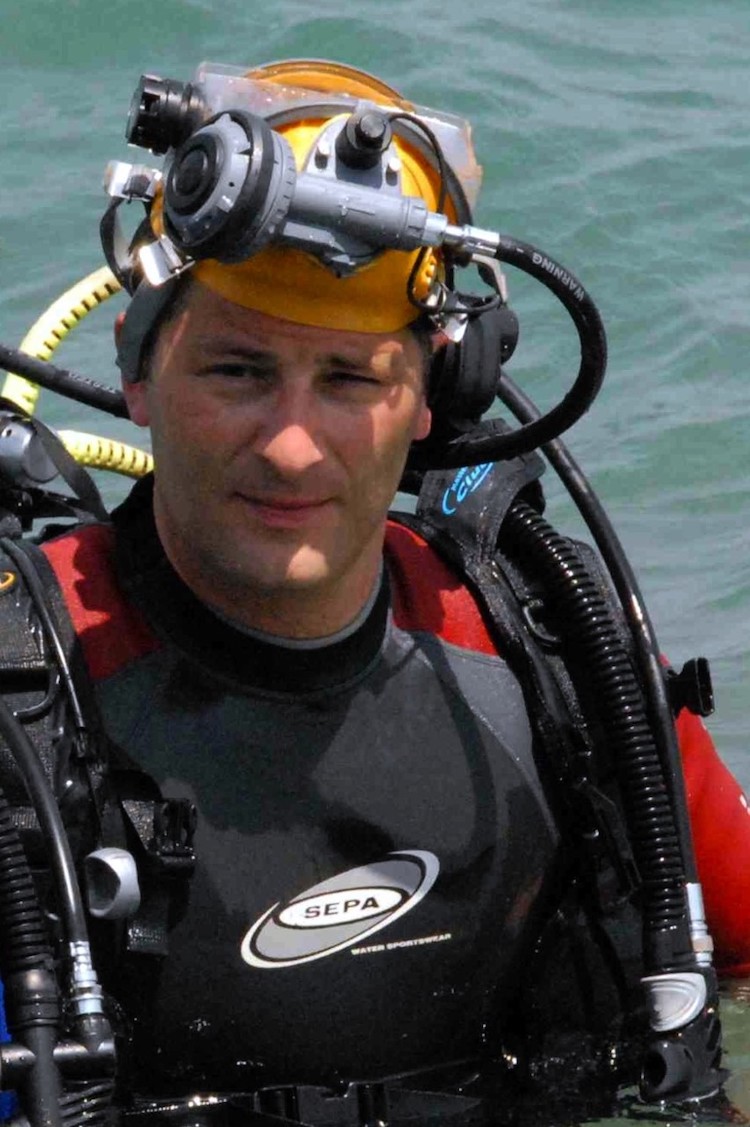 Among his multiple academic and professional accomplishments is having been an advisor for the past 12 years to the American deep-ocean exploration firm Odyssey Marine Exploration. A pioneer in deepwater shipwreck investigation from the English Channel to Florida, Odyssey usually operates in depths out of reach of human divers. The NASDAQ-listed company is known for such eminent discoveries as the SS Republic or the Holy Grail of shipwrecks, HMS Victory.

One of the many wrecks Odyssey came across a decade ago was located 70 kilometres southwest of Lands End at the entrance to the Irish Sea, part of a cluster unromantically codenamed Site 35F.

While the team was doing its Remotely Operated Vehicle (ROV) robotic exploration on this 17th-century wreck in a depth of 110 metres, Sean and his fellow marine archaeologists and historians noticed a peculiarity… something rarely ever seen in these parts of the world: elephant tusks. But it only took the experienced scientists a minute to figure out that these artefacts could only hail from Africa and must therefore be connected to the transatlantic triangle trade. In due time the ship’s remains were identified as those of a 1680s Royal African Company trader, a ‘business’ that traded with West Africa and created the blueprint for trafficking enslaved people to the New World. 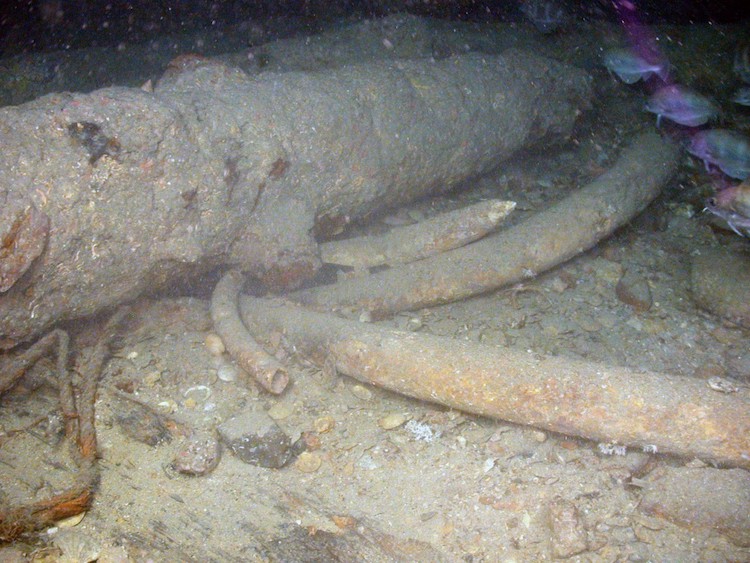 Elephant tusks snagged under cannon on the Royal African Company trader sunk in the Western Approaches between 1672 and 1690. Photo: Seascape Artifact Exhibits Inc.

That historic sites like these need to be preserved is evident. Not only out of respect for the souls lost in this spot, but also in order to recover and archaeologically preserve artifacts for scientific research and museum exhibitions, and glean valuable cultural information for education.

In his capacity as founder and director of Wreckwatch, a London-based consultancy specialising in global maritime heritage, Sean has been vocal for a long time about the pros and cons of leaving finds untouched (“in situ preservation”), and especially the current destruction of historic sites not only through exposure to the elements over time but also to threats like busy shipping channels, trawl fishing, and scallop dredging. Many a two-ton gun has been dragged hundreds of meters across the seafloor, and unexpected treasures from the deep often appear in trawl nets alongside the catch of the day, only to be discarded by the fishermen.

Marine archaeology is enjoying a golden wave right now. On the other side of the Atlantic, master scuba diver Kramer Wimberley is leading Diving With A Purpose (DWP), a collaborating organization with The National Association of Black Scuba Divers. Like Wreckwatch, the group has an interest in preserving underwater archaeological heritage but places additional focus on the protection, documentation, and interpretation of African slave trade shipwrecks, and the maritime history and culture of African-Americans.

DWP plays a key part in the recently released six-part docuseries Enslaved that follows Hollywood actor (and series co-producer) Samuel L. Jackson as he traces his African ancestry to the Benga tribe in Gabon. Regardless of one’s individual area of origin and port of arrival in the New World, the Middle Passage bridging Ghana and the colonial Caribbean plantations is central to the African American identity. A parallel narrative therefore presents Jackson’s story also from the viewpoint of maritime archaeology.

The series tracks the efforts of DWP as they search for and locate six slave ships that sank, often drowning the enslaved humans aboard. Using new diving technology — such as advanced 3D mapping and ground-penetrating radar — to locate and examine sunken slave ships on three continents, Enslaved reveals an entirely new perspective on the history of the transatlantic slave trade. 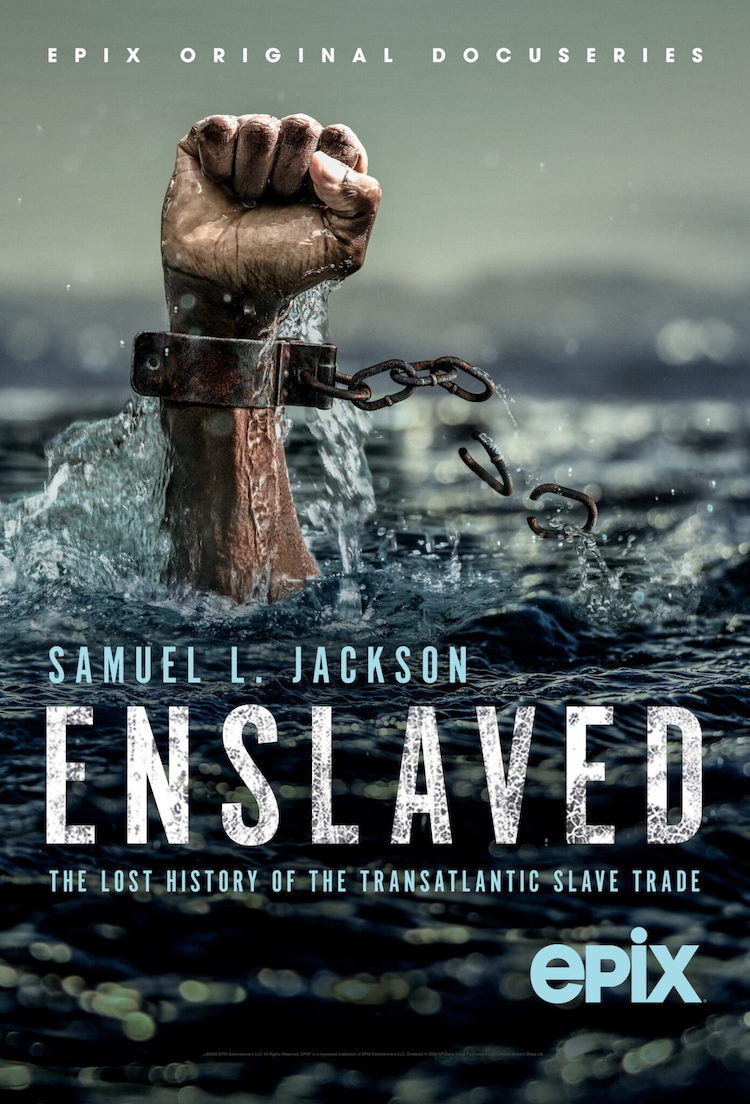 The main purpose of the documentary series was “to start a conversation”. But what Samuel L. Jackson and the DWP team couldn’t know in 2018 when planning and shooting this documentary series about this central part of past Black history was that by the time it was broadcast in 2020, they would live through a seismic shift in contemporary Black history, caused by events such as the Black Lives Matter movement. The vivid attention on the social aspect of the narrative also catapulted the hitherto rather obscure discipline of marine archaeology into the spotlight.

And here the circle closes – Sean, perfectly positioned as an archaeologist, historian, and defender of maritime heritage – became a consultant for this worldwide success series. 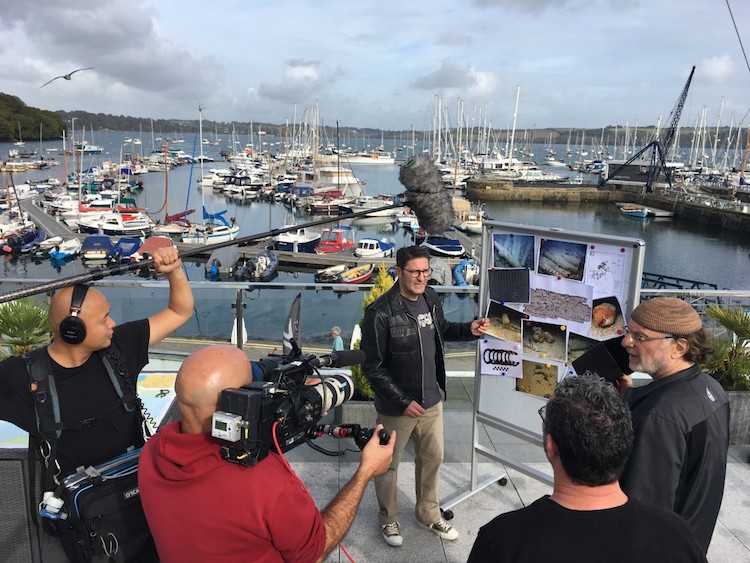 He recently shared his experience of this unique collaboration on “Back in America”, the popular podcast by RIVIERA BUZZ contributor Stanislas Berteloot which questions America’s culture and identity, and regularly picks up hot and current social issues.

Kramer Wimberley and Sean Kingsley were the first interviewees in this podcast series dedicated to Enslaved; other segments are currently being planned with free-diver and photographer Joshua Williams, and writer/journalist Kinga Philipps. Together, they provide a 360° view of this fascinating project and its meaning for Black American society today.

These transatlantic ships usually not only carried enslaved persons but also rich cargoes of trade goods, and for this reason were frequently intercepted and raided by pirates. And those swashbuckling buccaneers would also come to play an important and unexpected role in American slave history – fighting on the good side. They offered captured humans (and fugitive slaves on American shores) freedom in return for joining them. In the end about one-third of the 10,000 Golden Age pirates are thought to have been former slaves. On board, there was a level of equality among all crew that equates to true democracy. African pirates were entitled to the same privileges as their European counterparts, including voting, bearing arms, or receiving their fair share of the spoils. The best-known among them was Black Caesar who haunted the Florida Keys for years and later joined the infamous Blackbeard’s Queen Anne’s Revenge.

Not everyone can just up and become a shipwreck explorer but now anyone can live vicariously through Sean and his colleagues: stories and topics like the ones above will all eventually flow into Sean’s quarterly Wreckwatch magazine which he started earlier this year. Over 100 pages per issue, chock full of information presented in an easily digestible mix of scientific articles, entertaining stories, unknown facts, behind-the-scenes features, lots of fantastic underwater photography, descriptions of wreck dives in familiar waters and on the other side of the world… “Nowhere is out of bounds – from traces of prehistory in rivers and lakes to ships abandoned high and dry and sunk 5 kilometres under the seas. Our passionate explorers – divers, marine archaeologists, historians, artists, professors, and museum curators – share the latest thrills and finds from the front line to the lab,” so Sean explains the concept. 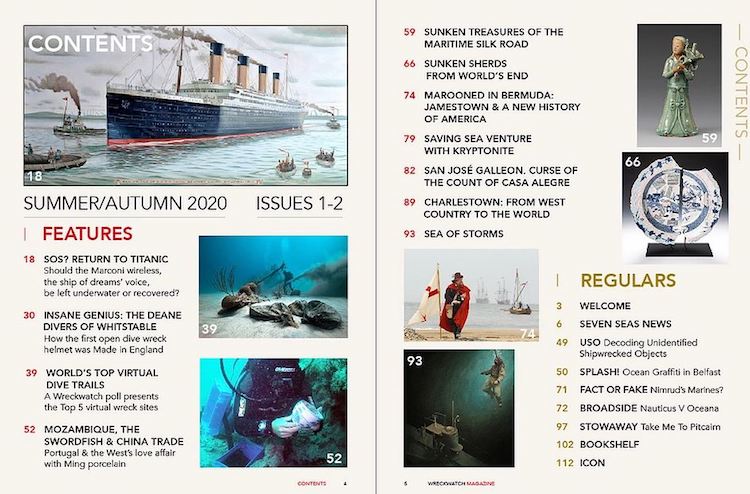 After the inaugural double number, the third issue is scheduled for publication on December 20, 2020 and, in a nod to the freebooters’ involvement in American history, it is entirely dedicated to pirates – from Captain Kidd’s unexpected life story to surprising facts about women pirates, the mysteries of the Fiery Dragon off Madagascar, the history behind pirate flags, a closer look at pirate booty… definitely an enjoyable read over the holidays (or any time really!) Oh, by the way, did you know that the venerable Sir Francis Drake, the great explorer in the services of Queen Elizabeth I, was… well, a pirate? Yes indeed!

Usually a single issue of the magazine is all yours for a modest £4.99 / €5.60 / $6.70, and annual subscriptions are available at a discount, but do check the Wreckwatch Magazine website for promos and specials. By the way, this may easily be the coolest gift idea this year for the adventurers in your life… No trees are harmed in the making of this eco-friendly magazine for the explorer on the go, published on a digital newsstand.

And Dr. Kingsley still has a special gift for the young: “Oceans cover 72% of the Earth. We believe they should be enjoyed by everyone. Wreckwatch, in partnership with the British Maritime Heritage Foundation, is therefore making the first four 2020 to 2021 issues FREE to every student or budding explorer in the world, aged 17 or under.” With the December issue this is extended to teachers, too. 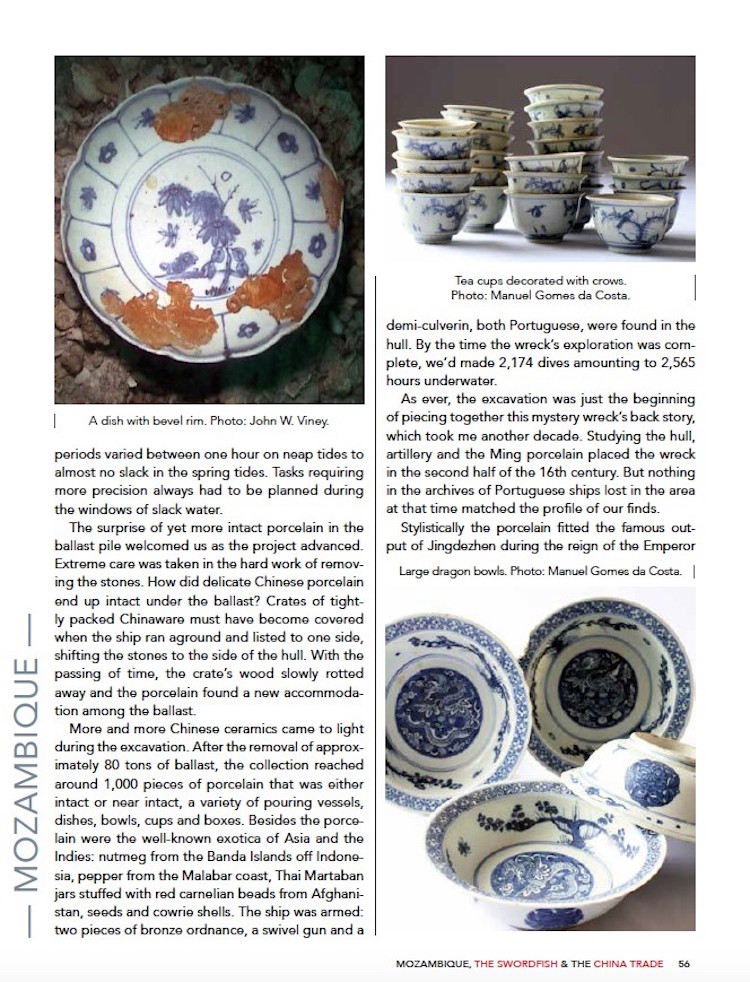 According to UNESCO estimates, three million shipwrecks litter the sea floor, and there has never been a better time to explore and save them, Sean tells us. “There is so much out there, and today we have the technology to visit and examine this part of our earth. It’s ‘Indiana Jones meets David Attenborough on Blue Planet’. The opportunities are bottomless”.

“History tells us what people want us to think.
Archaeology is the truth of what actually happened.”
–Dr. Sean Kingsley

All photos courtesy Dr. Sean Kingsley or as otherwise credited