The Monte-Carlo Philharmonic Orchestra has chosen the theme Light and Shade for its first concert of the 2019-2020 season.

French-Canadian contralto Marie-Nicole Lemieux – the Orchestra’s Artist in residence this season – won the Queen Fabiola and Lied Prize in Brussels in 2000, making her the first Canadian to win the Queen Elizabeth International Music Competition for Opera.

Her career has taken her to some of the most famous stages in the world, in opera houses such as La Scala, the Royal Opera House, Covent Garden, l’Opéra National de Paris, la Monnaie in Brussels, the Staatsoper in Berlin, the Theater an der Wien, the Teatro Real in Madrid, the Liceu of Barcelona, the Montreal Opera, and appearances at festivals such as the Salzburg Festival, the Glyndebourne Festival, and Chorégies d’Orange.

Ms Lemieux has also performed works of the great symphonic repertoire with some of the world’s leading orchestras – such as the New York Philharmonic, the St Petersburg Philharmonic and the London Philharmonia – led by some of the finest conductors our of time. As an acclaimed recital artist, she specializes in French and Russian songs, as well as German lieder.

Olivier Vernet – described by The American Organist as “a formidable performer” and by La Marseillaise as “an unrivalled organist of dazzling virtuosity” – served for 15 years as Co-Titular Organist of the Church of St Louis in Vichy, home of the famous Bernard Aubertin organ. In an international competition, he was selected as the successor of René Saorgin at Titular Organist at the Cathedral of Monaco in January 2006.

An international soloist and concert artist, he has performed in Paris at Notre Dame, La Madeleine, St-Etienne-du-Mont and with Radio France. He has appeared throughout France, and also in countries such as Germany, Canada, Denmark, Great Britain, Italy, the USA and Japan, and is frequently invited to perform at some of the world’s most prestigious organ and music festivals.

Olivier Vernet is currently organ professor at the Tours Conservancy, and at the Academy of Music Rainier III of Monaco. He is also Artistic Director of the Monaco International Organ Festival and the Organ Festival of Mougins.

The OPMC concert opens with de Sabata’s Symphonic Poem for Orchestra, Juventus, a work in the style of late-German romanticism, described by Gramophone magazine as having “an almost Waltonian exuberance, coloured (near the end) by just a hint of Puccini”.

Written in 1919, it was a frequent inclusion in programmes conducted by Arturo Toscanini, whose encouragement persuaded de Sabata – a composer, violinist and virtuoso pianist – to pursue a career in conducting. One of the world’s leading conductors of his time – particularly of Italian opera – de Sabata focussed on a wide ranging repertoire of traditional works, as well as those of modern composers such as Stravinsky, Ravel, Debussy, Sibelius, Strauss and his Italian contemporaries. As conductor of the Monte-Carlo Opera, he led the world premiere of Ravel’s L’enfant et les Sortiléges in 1925.

Elgar’s Sea Pictures, Opus 37 is a collection of five songs for contralto and orchestra. It’s a which work attracted some adverse criticism, for a number of reasons – such as its rather superficial link to the sea, and the fact that there isn’t really a central theme which connects the individual songs – however it remains one of the most popular of Elgar’s vocal works (and of those of any other composer too).

The first, Sea Slumber Song, is set to the words of 19th century English poet, Roden Noel, said by Encyclopaedia Brittanica to have had “a genuine feeling for nature”. The second, In Haven (Capri) has words by Elgar’s wife, Alice, who is credited with writing the text for a number of his early songs. This particular song was set by Elgar three years previously, and published under the title Love Alone, but he later incorporated it into the cycle. It’s regarded as the most delightful of the five. Where Corals Lie has words by 19th and early 20th century English poet Richard Garnett, and The Swimmer was set to the words of Australian poet Adam Lindsay Gordon. 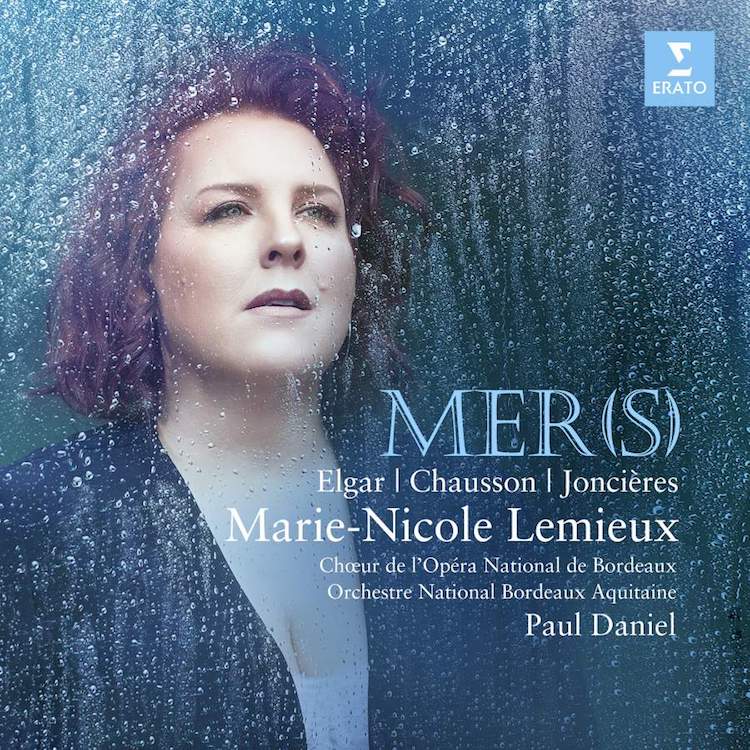 Marie-Nicole Lemieux has just released a CD, on the Warner Classics label, entitled MER(S) which features this work by Elgar, with the Orchestra and Chorus of Bordeaux Aquitaine, led by Music Director Paul Daniel.

Camille Saint-Saëns – composer, organist, conductor and pianist – was regarded as a musical prodigy, who at the age of five accompanied a Beethoven violin sonata on the piano, and gave his first recital at the age of 11. Appointed organist at La Madeleine in Paris while he was still in his twenties, he was described by his great friend Franz Liszt as “the greatest organist in the world”. As professor of piano at the Niedermeyer School, his pupils included Gabriel Fauré and André Messager, and after the Franco-Prussian War, he was instrumental in the establishment of the National Society of Music, which promoted performances of significant French orchestral works of the following generation.

Saint-Saëns’ Symphony No 3 in C Minor Opus 78 – dedicated to Liszt – was composed at the request of the Philharmonic Society of London (now the Royal Philharmonic Society), and written during one of Saint-Saëns’ frequent tours outside France. One of the first widely-praised symphonies by a French composer, it premiered in London on May 19th, 1886, with the composer conducting.

The Symphony was actually the fifth that Saint-Saëns composed, however since only three were numbered, this is the third of these. It’s a grand work, written in the style of the Romantic era, by turns wonderfully melodic then hauntingly beautiful, with a particularly majestic and stirring finale in which the organ takes centre stage – hence it’s known as the “Organ Symphony”. The immediately recognizable theme of the final movement was reworked as the theme to the film Babe.

Kazuki Yamada leads the Monte-Carlo Philharmonic Orchestra in the opening concert of the new season, at the Grimaldi Forum, on 22nd September 2019. For more information and tickets, visit the OPMC website

Lead image and logo via OPMC