One of the best contemporary plays was brutally stopped by the pandemic last year. Now Collectif 8 finally has the chance to perform its masterpiece. And it’s even more poignant now.

It has the makings of an Orwellian plot: In February 2020, Collectif 8 was just getting ready to premiere its adaptation of George Orwell’s prescient novel 1984 when reality struck: a novel and deadly virus would cause governments around the world to send their citizens into collective lockdowns and various degrees of submission to overlording authorities.

One year and seven months later, filled with anxiogenic rhetorics, heavily advocated vaccination campaigns, and millions of people on either border of a nervous breakdown, the world finally starts seeing a dim light at the end of the long tunnel. And like back in the times of the plague, theaters are the first ones to venture out and bring badly needed mental respite.

It seems only fitting that Collectif 8 would immediately dust off 1984 – not in an attempt to add to the world’s anguish but because of it. As we said in our article dating back to February 2020, this is a play that both provokes deep thought but also shows a profound humanity and even brings a ray of hope.

When George Orwell, plagued by severe bouts with pneumonia, wrote Nineteen Eighty Four shortly after the end of World War II, neither he nor anyone else could have known just what a precise picture of the future he painted…. almost a self-fulfilling prophecy. With its ever-increasing and spine-chilling pertinence, the dystopian novel has become one of the most frequently adapted pieces of contemporary Anglo-Saxon literature over the past couple of decades, although few French theatre companies ventured into this territory. But Théâtre Anthéa’s house company Collectif 8 did not shy away from the challenge, immersing the story in its unique universe at the nexus of theatre and cinema. Playing in Antibes through 17th October 2021, the Orwellian saga 1984 is decidedly another signature play in Collectif 8’s fabled ascent to theatrical zenith.

To understand C8’s adaptation and artistic vision requires a closer look at what informs it – George Orwell’s biography and the novel that catapulted him to timeless acclaim.

The Back Story, Part One: Who was George Orwell? 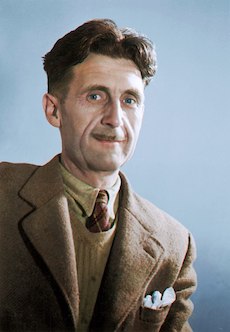 Born in 1903 in Motihari, India, Eric Arthur Blair, better known by his pen name George Orwell, crammed a hundred lives into the span of his 46 years on earth. He was a sergeant in the imperial police in Burma, an itinerant writer in the slums of London and the mining industry, a dishwasher at a Parisian luxury hotel, a bookseller, a journalist, and a teacher. He also fought in the Workers’ Party of Marxist Unification during the Spanish War and volunteered in the British Home Guard in anticipation of a Nazi invasion.

Claiming to be a “grassroots socialist”, i.e. sincerely attached to the cause of the English proletariat, he is certainly opposed to the conservative right, but especially to the “moral” left. He loathes “parlour” communists like Jean-Paul Sartre and distrusts George Bernard Shaw, whom he suspects of being an intelligence officer for Stalin.

Two of his most famous works are rooted in familiarity with the authoritarian and totalitarian regimes of the 20th century: Published in 1945, right in the middle of the face-off between Third Reich and the USSR, Animal Farm denounces the inhumanities of the Soviet regime. Four years later, in 1949, the soberly titled novel 1984 casts a chilling preview of a not-too-distant dystopia.

The story takes place in an imagined future, the year 1984, when much of the world has fallen victim to perpetual war, omnipresent government surveillance, and historical negationism. An inescapable dystopia, based on a media-fueled neurosis, has taken root. Modern video surveillance and whistle-blowing reinforces the effects of devastating propaganda.

In order to keep the population happily submissive, all established truths are overturned. History is falsified to suit the Party’s agenda. Philosophy and literature are abolished, and language is emptied of its meaning and reshaped to form a “Newspeak” that conditions the reflection of those who use it even on an unconscious level. The thought police track down potential dissidents, striking at the heart of the system during purges that are not unlike certain historical episodes in the USSR.

Three superpowers are fighting over a fourth zone in the sprawling city of London, placed under a totalitarian regime of totalitarian rule in a Stalinesque dictatorship. Great Britain, known as Airstrip One, has become a province of a superstate named Oceania that is ruled by the Party who employs the Thought Police to persecute individuality and independent thinking. Big Brother, the mysterious founder of the party – a ubiquitous but invisible entity – keeps an eye on the entire population through “surveillance monitors”. A certain Goldstein is presented as the regime’s Number One enemy, the hypothetical adversary of an entire society. 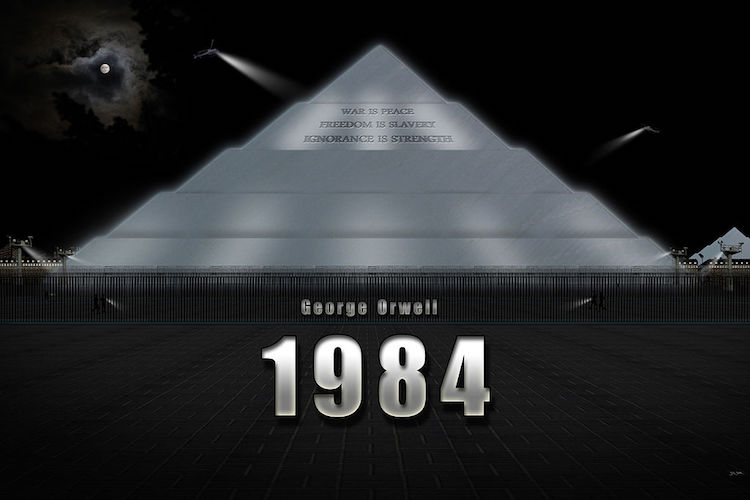 The story’s protagonist, Winston Smith, is a diligent rank-and-file worker and Party member who is tasked with rewriting history at the Ministry of Truth but secretly hates the Party. Since love is forbidden and sex is relegated to a purely procreative function, his relationship with his co-worker Julia has to be kept clandestine. She fills his head with dreams of rebellion and emancipation. They meet O’Brien, who poses as a member of the Brotherhood (the counter-revolutionary resistance, led by Goldstein, who is plotting against the regime). Little do they know though O’Brien is a member of the Inner party and the Thought Police, out to deceive, trap, and capture Winston and Julia.

Written in 1949, with the Nazi terror still fresh in mind, this visionary novel sounds modeled on dictators like Hitler. It centres on the consequences of government over-reach, totalitarianism, mass surveillance, and repressive regimentation of all persons and behaviours within society.

But in fact, the parallels to the 2020 political landscape are shocking. Certain powerful world leaders overtly position themselves as populist cult leaders, perverting truth, facts, and language, influencing media, seeking to divide a previously united nation, sowing hatred, jealousy, and distrust, planting fear in minds, and favoring and empowering those who blindly tread party lines. O’Brien’s quote sticks to the mind, “If you want an image of the future, imagine a boot trampling on a human face… forever.”

This was what motivated Gaële Boghossian and Paulo Correia, co-founders of Collectif 8, to tackle this complex text. A fine connoisseur of the English language, Gaële adapted 1984 for a French audience, not shying away from the linguistic and cultural complexity. Like in many of Collectif 8’s other plays, she once again proves her considerable talent for artistic direction. Paulo’s brilliant mastery of video as an integral element of stage theatre is particularly topical in this highly visual and suggestive play.

To put the play in perspective, Gaële Boghossian, Paulo Correia, and musician-composer Benoît Berrou answer some of the questions on everyone’s mind:

Where does your interest in the novel come from?

Gaële Boghossian: Mounting1984 today has become a vital artistic necessity. Surveillance, manipulation of thought and information, thought-reformatting, Puritanism, and communitarianism, increasing impoverishment of language and thought, restriction of freedom of expression, state of emergency…. So many of the societal manifestations of our time are predicted in this visionary novel and give us a deep sense of irrepressible urgency.

Humanity is disappearing in bits, silently, insidiously, with our agreement. What if tomorrow the final stage of this dehumanization were to completely erase our identities and instead fill our minds with something else, something monstrous, something terrifying? Could the virtual element be useful in a totalitarian society? Wouldn’t it become a highly effective support for propaganda, manipulation and torture? The book is fiction… and yet by very nearly living this very same future Orwell describes, we are currently being subjected to a blood-curdling electric shock.

Is there another, deeper message in 1984?

Gaële Boghossian: The parallel with our society is striking and we all are actors in this fiction that’s coming to life. We are Winston, whose consciousness awakens, full of hope, regaining the feeling of being a free man… ready to fight against the freedom-destroying system. 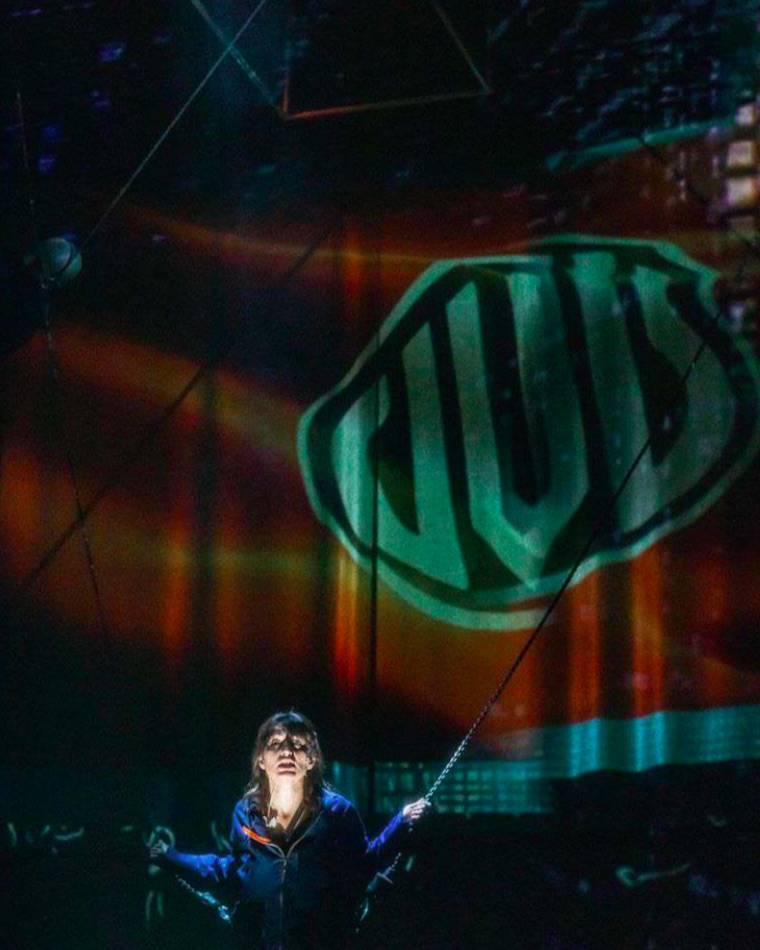 1984 is a hymn to Humanity, a call to preserve it. It alerts us, shakes us, and reveals to us the mechanisms of a power that works only to its own advantage and for its own future. In a universe where the Virtual is at the service of power, the treasure hunt for clues can begin. The puzzle is coming together piece by piece, minute by minute. We are helpless spectators, watching the establishment of a totalitarian system which manipulates minds. In this breathtaking thriller, the game consists in dissociating the Real and the Virtual, deciphering the warning signs of disaster, recognizing allies and enemies alike, and play along in a diabolical double game.

How do you integrate video in the scenography?

Paulo Correia: The video creation is built on 3D mapping of the set. The “construct” is an interrogation- torture room used to clear a subject of their memory. Visual and sound stimuli plunges Winston back in his recollection. The video projection then recreates a familiar environment by reproducing reality. This reality is then manipulated and altered by interrogators to distort, scramble, and blur the perception of reality. This process aims to suck up a subject’s memory, and thereby his humanity, with the aim of total manipulation and a reformatting of his mind.

You adapt and mount very different texts by some of the greatest literary writers. How do you choose them and what are their commonalities?

Gaële Boghossian: The common point is always the political message. Politics in the original sense of the term: “polis”, the city. The set is for me a vital tribune. The media are becoming more and more obscure, the public finds it difficult to trust them, and social networks promote thinking in clichés and poorly digested populism. But each of these subjects is too complex to approach without reflection and deep argumentation.

Theatre is therefore a political forum. This does not in any way take away from artistic lightness but we owe it to the subject to treat it rigorously and in a meaningful way. 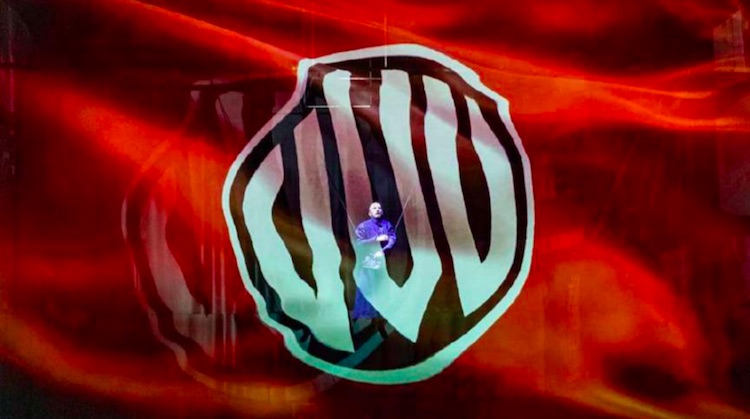 Great works of literature, societal analyses by visionary authors, are bridges between our past, present, and future. They are the basis for essential reflections on the evolution of mankind that allow for spectators/citizens to take the necessary step back to observe our world.

How does music help illustrate the narrative of 1984?

Benoît Berrou: To illustrate the 1984 universe in ways of sound, it was necessary to ask questions about the role of music in such a context. In the novel, the works of Shakespeare, Milton or Byron are transformed, deformed through the Newspeak filter, to match the vision of the “Party”.

The same applies to music, which is now made by a machine: the versifier. So I worked on excerpts from major themes of music that are part of the collective unconscious, like for example a Chopin Nocturne. I deconstructed them, then reconstructed them kaleidoscopically to make it a totally different sound material but still recognizable to our subconscious . 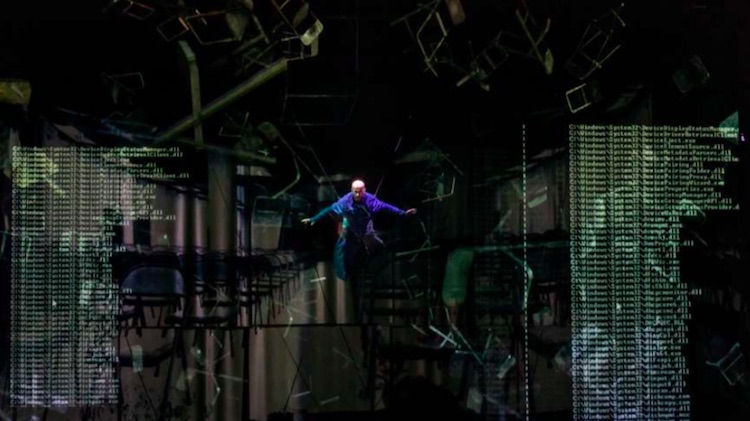 1984 is a new Collectif 8 creation in collaboration with Théâtre Anthéa where the play performs through 17th October 2021. For ticket reservations and further information, please visit the Anthéa website.