At a time when audiences are longing to attend a live performance, Ballet Nice Méditerranée has, appropriately, selected a triptych of popular works with which to treat lovers of dance this month.

There are at least four versions of the ballet recounting the tale of Sylvia, ou La nymphe de Diane in the classical repertoire – all set to Léo Delibes’ gorgeous score. The first was choreographed by Louis Mérante in 1876 for the Paris Opera Ballet, Sir Frederick Ashton created his own version for The Royal Ballet in 1952, and John Neumeier choreographed an updated interpretation in 2011, but it’s Éric Vu-An’s choreographic setting of Mérante’s ballet which Ballet Nice performs this season.

Mérante – who is best remembered for this ballet – was a dancer, First Balletmaster and Chief Choreographer of the Paris Opera Ballet – initially at the Salle Le Peletier until its destruction by fire in 1873, and subsequently at the Palais Garnier which opened in 1875. His ballet was based on an original libretto by Jules Barbier and Baron de Reinach, which was drawn from Torquato Tasso’s 1573 pastoral drama Aminta. In this tale, a shepherd, Amyntas, falls in love with Sylvia – one of Diana’s nymphs. As a disciple of the goddess Diana, she refuses his advances, and shoots him with an arrow. Eros, the god of love, intervenes, however, shoots her with an arrow, and she falls in love with Amyntas. Subsequently kidnapped by the hunter Orion – who wanted Sylvia for himself – she is freed by Eros who reunites the lovers, with Diana’s blessing, at a Bacchanalian festival.

The pas de deux which follows is entitled simply Belong, and is an excerpt from a 1973 ballet, What to do till the Messiah Comes, by Norbert Vesak – who became one of Canada’s leading choregoraphers during the 1970s. Having started his career in Canada in the 1960s, it wasn’t until Vesak moved to the United States in the early 1970s that his international career was launched, with commissions from companies such as Miami Ballet, Scottish Ballet and Berlin’s Deutsche Opera Ballet. He was later appointed director of the San Francisco Opera Ballet as well as the Metropolitan Opera Ballet in New York.

Vesak was regarded as controversial because of his “penchant for flashy choreography, trendy subjects and lavish visual effects”, but the Belong pas de deux is a surprisingly far cry from this perception. Set to a piece of music entitled December Angel by Syrinx, this passionate and graceful work has been described by contemporarydancevideos.com as “Stunning ….. deeply emotional, wrenching yet exhilarating”. It won Vesak a gold medal at the 1980 Varna International Ballet Competition in Bulgaria, and also at the World Ballet Concourse in Japan that year. 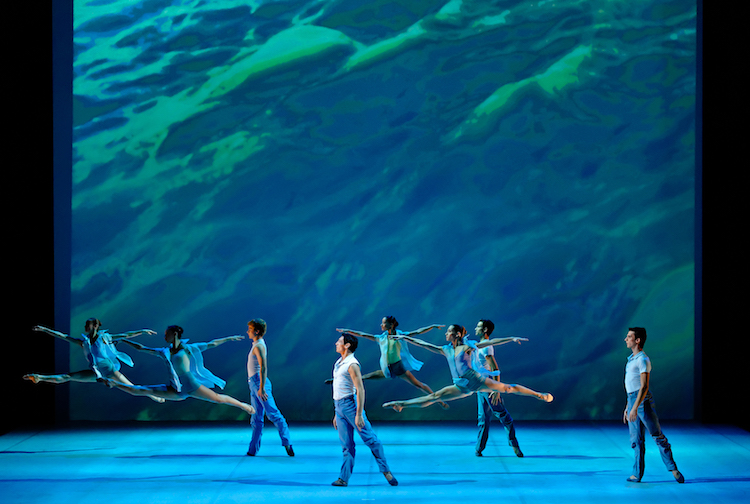 Known for her mastery at creating “luminous, continuously shifting dancescapes” (New York Times), Lucinda Childs created Oceana for Ballet Nice in 2011. With the fluid, almost floating quality of her choreography, Childs recreates the serenity and ethereal environment of the underwater world, emphasised by Dominique Drillot’s highly effective backdrops depicting the constant swelling and movement of the ocean. The mood is heightened by Argentinian composer Osvaldo Golijov’s haunting score, for female vocalist, boy soprano and choir.

Ballet Nice Méditerranée presents the Sylvia Suite, the Belong pas de deux and Oceana on 18th and 19th September at the Théâtre de Verdure – the Greek-inspired amphitheatre in the Albert 1er garden on the Promendade des Anglais.

Reservations may be made online.