Taking its title from Stendhal’s famous claim ”La beauté n’est que la promesse du Bonheur” (Beauty is but the promise of happiness), a new exhibition at the Villa Paloma is paying tribute to Tom Wesselmann.

Wesselmann, a leading figure of American Pop Art alongside the likes of Roy Lichtenstein and Andy Warhol, is being honoured with an exhibition featuring some twenty-five paintings, drawings and sculptures that were produced between 1963 and 1993, such as Great American Nudes, Bedroom Paintings and Still Life. The exhibition, which is not a retrospective but rather a focus on the artist’s portrayal of women, explores how the controversial American represented the female body to create artworks that were boldly-coloured and often erotically charged. A good way to show that behind the provocative, even steamy, images, that have often been the object of controversy for their so-called dehumanization or misogyny, the artist’s goal was first and foremost to celebrate sexuality rather than objectifying women! 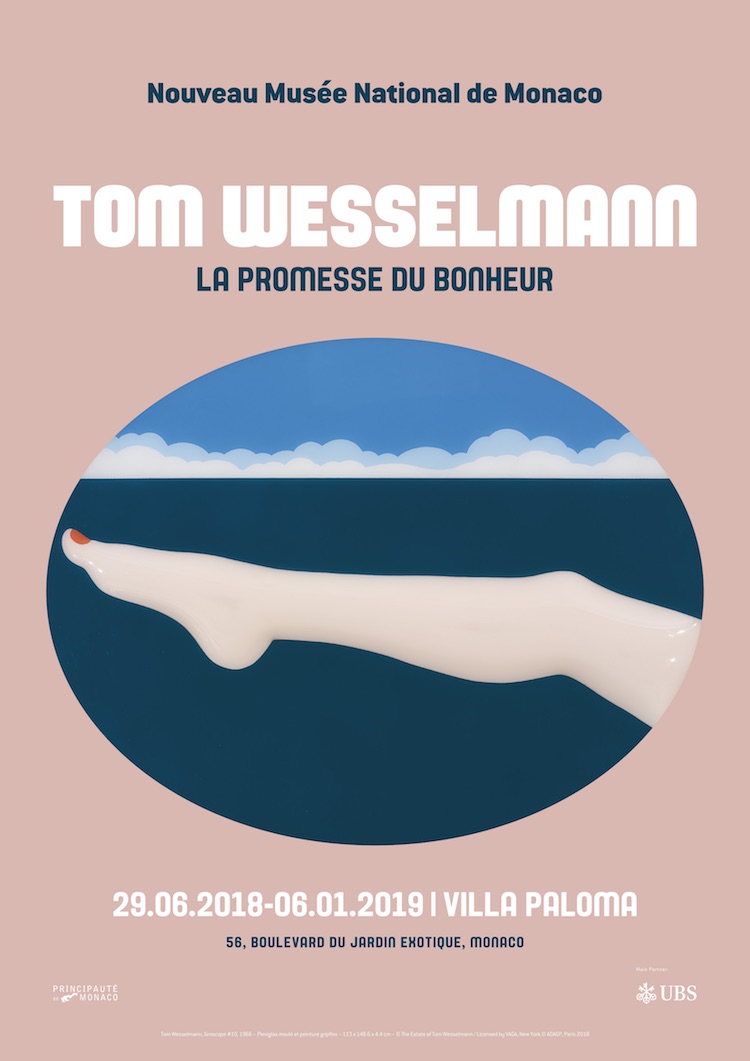 If his early works were small-scaled Cubist-inspired collages combining paint and magazine cut-outs that often featured pink Matisse-like nudes, the artist gradually moved to large paintings that incorporated three-dimensional household objects and reconstructions of domestic American interiors and expanded to include still life, interiors, and landscape. As he said, “I used blunt Pop imagery and simple, clean colors to take on the traditional subjects of painting–the nude, the still life, the landscape”.

Later on, in the 1970s, he began combining mundane objects like a woman’s shoe, a belt, a vase of flowers into sculptural compositions with special dimensionality and his later works, “steel drawings” featured compositions of cut-out images in aluminum, which were layered and painted to create a kind of relief wall sculpture.

His creations however never ceased to be sexy, visually bold and brightly coloured.

Tom Wesselmann, La Promesse du Bonheur at the Villa Paloma runs until the 6th of January, 2019. Tickets costs 6€ and opening hours are from 10am to 6pm daily.