Good news for all music afficionados on the French Riviera, Nice Music Live is back this July with a top class lineup.

Nice Music Live, which replaced the very popular Crazy Week, improves with each passing year, and has definitely established itself as one of the not-to-be-missed summer events on the Riviera.

This year the festival has added more dates and more artists to its lineup, offering a truly eclectic programme in a superb location – the Théâtre de Verdure and Place Masséna – over six days from the 13th to the 26th of July.

Nice Music Live will kick off on Wednesday the 13th with the Dublin-based Mexican duo, Rodrigo Y Gabriela (pictured in lead image above). With their provocative flamenco-style reinterpretations of classic heavy metal songs, they have received raves all around the world from music fans and critics.

On Thursday the 21st, it will be Maître Gims’ turn to take the stage. The Congolese-born French rapper is a member of the famous hip-hop Sexion d’Assaut, but over the last few years he has also released two very successful solo albums, Subliminal and Mon Cœur avait raison.

The following night promises an interesting mix of up-and coming artists: the German folk duo, Milky Chance, with their reggae and electronic influenced set, and the French electrop-pop musicians Broken Back, and Mayerus.

The Avener, the young Niçois who topped the charts in more than 17 countries last year with his first album, ‘The Wanderings of the Avener’ and its rework of Phoebe Kildeer’s song “Fade Out Lines”, will be the star of the night on Saturday the 23rd. He will be supported by Synapson and Silence Events.

And the momentum will continue the following night with the much-anticipated concert of the French duo Fréro Delavega and English singer-songwriter/guitarist, Julian Perretta.

Finally, after a day off, the highly popular French folk rock band, Louise Attaque, which is making a comeback this year with their fourth album, should delight the crowd with not only their new songs but also their many hits. 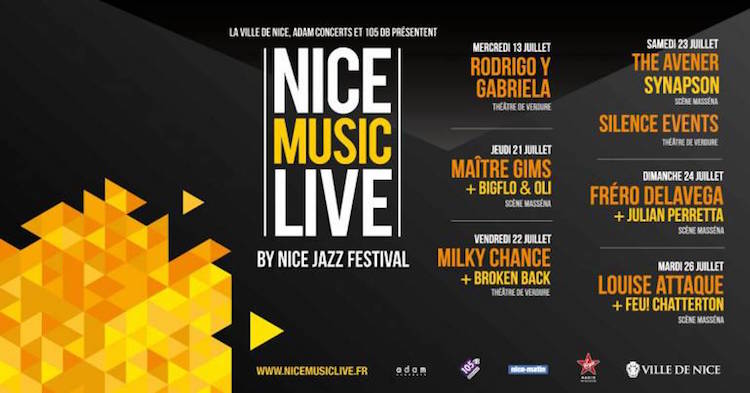