The Indigènes signature is the gold standard of history docu-fiction, as the Parisian filmmakers’ newest release proves yet again

The subject of countless books, studies, documentaries and fiction films, there seems to be hardly anything new and original left to dig up about Le Petit Général, Napoléon. Well, Indigènes Productions begs to differ. Director Fabrice Hourlier, writers Stéphanie Hauville and Jacques Dubuisson, and their team keep surprising the audience time after time. After their phenomenally successful docu-fiction “Napoléon, the Russian Campaign” they are now turning back the clock to examine the Corsican’s younger years. His Egyptian campaign was a military disaster by all accounts, but led to scientific and artistic exploits that set new standards. And this is the fresh angle that this documentary – a crossover between acting and animation – takes.

Toulon, March 1798. Napoléon is 28 years old when he leads a naval army to Egypt. His objectives: defeat the Mamluk rulers, conquer Egypt, explore the country’s culture and civilization, and find and build a waterway shortcut along the Arabian Peninsula to avoid having to circumvent all of Africa on the way to India. His fleet consists of 40,000 soldiers, 10,000 mariners, and 167 scientists and artists. Among them are young and ambitious scholars who in later years would achieve enduring fame: mathematician Gaspard Monge, physicist and chemist Claude-Louis Berthollet, artist Vivant Denon, and a group of engineer students from leading French universities, including Edouard de Villiers and Jean-Baptiste Jollois.

After six long weeks on board, Bonaparte lands in Alexandria. Facing harsh conditions, his army advances into a hostile country with the goal to conquer Cairo. The initial success is cut short though when Admiral Nelson sinks the French fleet at Aboukir. Despite the stinging defeat Napoléon remains committed to his quest of the country’s civilization, and in August 1798 founds the Institute of Egypt, consisting of four branches: mathematics, physics, political economy, and literature and arts. Berthollet and Monge are put at its head. But the scientists find themselves mostly taking care of army logistics, and contrary to their peaceful mission, they even have to take up arms against the rising Cairo population in October 1798…

Once calm is restored and Southern Egypt is conquered, Napoléon eyes Syria. While he and his troops march toward the Levant, Villiers and Jollois, two of the young scientists on the mission, explore the Nile Valley. Fascinated by their discoveries, they record the vestiges of Upper Egypt at Luxor, Karnak, and Assouan with scientific rigor, unaware that Bonaparte’s advance is stopped cold at St. Jean-d’Acre. His dream of conquering the Orient shattered, he secretly departs for France, leaving his army and scientists behind in great difficulties. In 1801 the scholars eventually return home as well, laden with rich cultural bounty. Among the treasures gathered, one of history’s greatest marvels, the hieroglyph-covered Rosetta Stone. Their work and research will have redefined modern archaeology and laid the foundation of Egyptology, a new scientific discipline showcasing antique and contemporaneous life of the ancient civilization along the banks of the River Nile. Most importantly though, it would ultimately also help wipe out the record of Napoléon’s embarrassing military failure in Egypt. 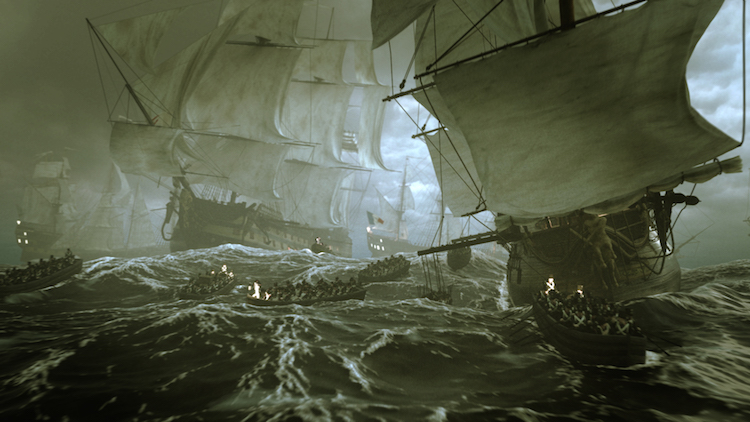 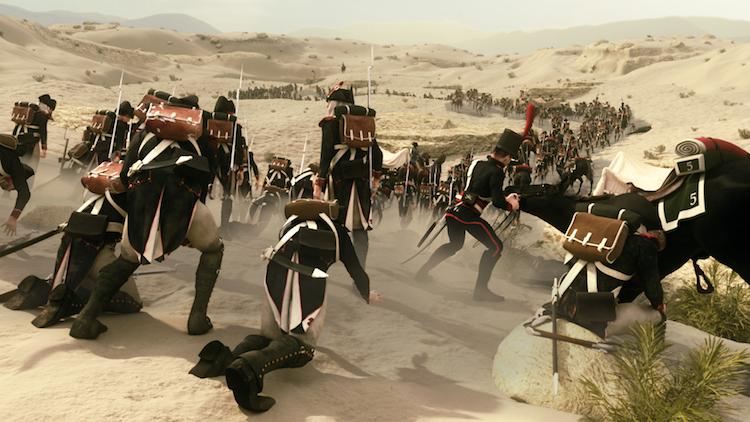 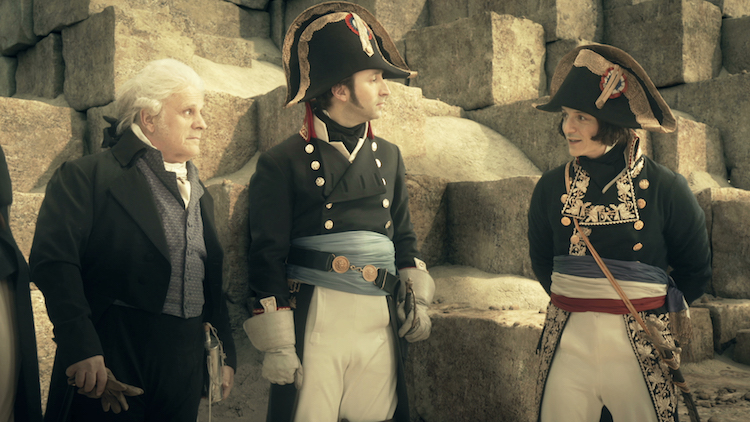 Told mostly through the eyes of scientists and artists, Bonaparte, La Campagne d’Egypte is yet another epic compound, reminiscent of grand 1950s and 60s Hollywood quality peplum, but with a thoroughly modern approach to storytelling. As in previous history docu-fictions that Indigènes realized for ARTE, actors, digital animation, and expert commentators merge seamlessly to bring a fascinating and underreported chapter of history to life, told with astounding detail and historic accuracy. The three principal actors Thibault Pinson (Bonaparte), Fabian Wolfrom (de Villiers) and Eric Beauperrin (Jollois) – young, fresh-faced, and talented – step convincingly into period costumes and attitude. Shot against green wall and digitally reconstituted with 3D stop motion and photogrammetry technology, the story puts the viewer right in the heart of the events. Minutely researched costumes and props, and the musical illustration by Olivier Lafuma, one of the truly great in his field, round out the opus.

It took almost three years to create, research, write, and produce the Egyptian Campaign, principal writer Stéphanie Hauville tells us. But it’s a labour of love. She is a history aficionada, and the intellectual force behind the artistic and creative powerhouse Fabrice Hourlier. Among their memorable productions, Au Nom d’Athènes, Napoléon’s Russian Campaign, or Aile Contre Aile. A recent pre-screening in Paris of this newest production had critics and notoriously difficult-to-please industry experts raving about a “magical experience”. 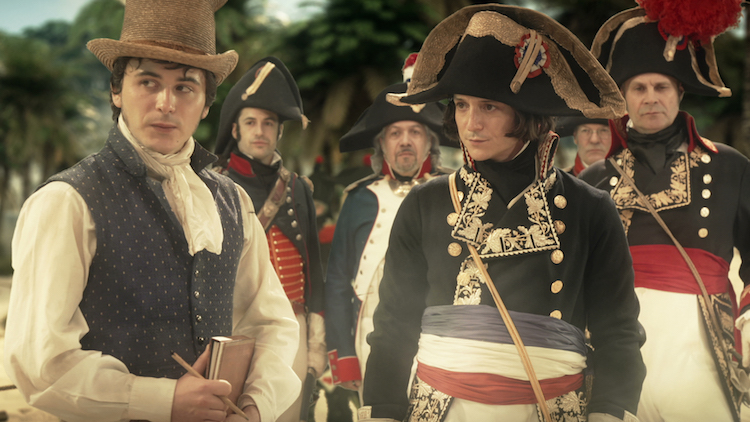 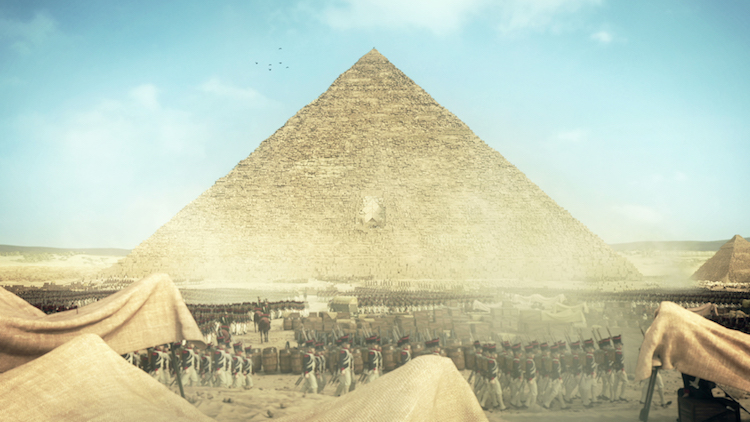 This two-part series airs back-to-back on ARTE on Saturday, 22 April at 20h50 (France and Germany.) And if you want to refresh your memory on what happened on Napoléon’s Russian Campaign, do not miss its rerun – the 2015 Indigènes production starring Marc Duret in the title role – on ARTE on Saturday, 29 April at the same hour.