It seems like a formula for success: cast cute kids and charismatic animals in a film, set everything against a scenic backdrop, and it’s going to be a blockbuster. Well, the ingredients are all there, but renowned French director Gilles de Maistre’s first cinema creation Mia et le Lion Blanc (Mia and the White Lion), has absolutely nothing formulaic about it. Instead, it is a masterfully and sensitively told story, based on true events, how humans and beasts can indeed become best friends and overcome tremendous obstacles despite all odds. It is also about human complexities, the environment, and evil hunting practices, but on a level so subtle you’ll have to really tune in to catch the messages between the lines.

The film tells the story of Mia, a precocious 11 year old originally from London whose parents move to South Africa to run a cat farm. When a white lion cub is born, who will be named Charlie, Mia forms an extraordinary relationship with him. Over the next three years, they will grow up together and form a close bond. Mia’s emotionally complex brother Mick also finds an unexpected friend in the animal. When Mia turns 14 and Charlie has become a splendid adult lion, she discovers the unbearable truth: her father has decided to sell the Big Cat to trophy hunters. Desperate, Mia has no choice but to run away with Charlie to save him. Braving all dangers, they set out across South Africa to reach the Timbavati Wildlife Reserve… but will Mia’s efforts save her friend?

The casting call could have looked something like this, “Looking for child and teenage actors willing to spend three years with lions”. Telling Mia and Charlie’s story with the greatest degree of authenticity required special measures. When director Gilles de Maistre approached renowned animal behaviourist and “lion whisperer” Kevin Richardson about the possibility of filming a child with a lion, he was told that it would be impossible, as the only way for the lion not to harm the child would be that they grow up together, a three year process for a lion and much too long for a film shoot. Wild cats only “tame” themselves after a long process of habituation, Richardson explained. But that did not deter de Maistre.

To truly become a part of Charlie’s life, young actors Daniah De Villiers (Mia) and her film brother Ryan Mac Lennan (Mick) had to live side by side with the lion chosen in the cradle to share the screen with them. Throughout the three years of shooting, they followed a specific, almost-daily training (supervised by Kevin Richardson himself) teaching them how to create and maintain this privileged relationship with the lion. No special effects, no tricks, no editing. This is how Gilles de Maistre was able to work with Mia and Charlie without faking, lending authenticity to this film. “We did this in stark contrast to all conventional codes of movie making,” the director states.

There is something about watching children rub shoulders with a lion so closely. But beyond this unprecedented performance, the film draws great emotional truth from this long-lasting relationship: we see Mia, Mick, and Charlie grow up “for real” through the actors who play them, we perceive the reality of the friendly bond that has been created between Daniah and Thor (the lion “playing” Charlie) as we follow them over a three year span. And the movie succeeds in raising awareness of the animal cause by denouncing canned hunting, a trophy hunt in which an animal is kept in a confined or fenced-in area increasing the likelihood of the hunter obtaining a kill, a practice vehemently fought by Kevin Richardson and other leading animal advocates.

“Mia and the White Lion is not the story of a capricious little girl who refuses to become an adult and understand that a lion is not a domestic animal. As Mia grows up, she also discovers the reality of lion breeding and the treacherousness of the adult world. The message of the film is clear: wild animals are not made to live in cages, let alone to be cowardly slaughtered there.”

While narrated with extraordinary sensitivity and elegance, this is not intended to be a feel-good, fluff movie. Gilles de Maistre comes from a documentary-making background, and you can sense it throughout the story. Its humans are flawed. The richest and most ambiguous character is John, Mia’s father: despite his theoretical principals (and the promises he made to his wife), he ends up selling lions to hunters. When Charlie, the cute lion cub, is introduced to the family one Christmas morning, the atmosphere is magical, but John is immediately aware of the benefit he will get from it to attract tourists to his farm. It will take Mia’s obstinacy to confront him with his contradictions, and shake his resignation.

Mia and the White Lion is also an ecological tale. Gilles de Maistre’s magnificent images are obviously an ode to South Africa’s wilderness and the animals that populate it. But the film also carries a strong message about animal protection. By his rare and precious character, Charlie the white lion appears as a metaphor for the benefits of nature: causing wonder, but also a desire for dominance. Human predators are never far … which leads into the aspect of violence against animals. While the scenes are never explicit, the subject is not watered down either. Without excusing the practice, the film squarely puts the spotlight on an economy operating on animal exploitation with the blessing of South African authorities. It also makes us understand that the guilty parties are not just hunters looking for a spectacular trophy, but also ordinary tourists who do not concern themselves with eco-tourism respectful of wildlife. 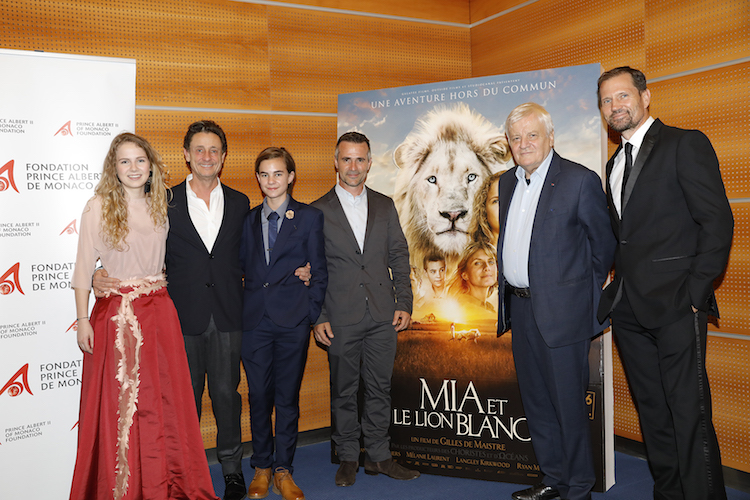 Young actors Daniah De Villiers and Ryan MacLennan’s impressive performances lead a well-matched cast, and the animal star, Thor/Charlie, has the cinematographic qualities of George Clooney – immensely handsome, seductive and likeable while remaining an impressive and ever so slightly aloof creature in his own realm commanding all the respect in the world. Film photography is as stunning as you may expect it to be in an environment as gorgeous and visually rich as South Africa. As for Gilles de Maistre, he has 30 years of television movie experience under his belt during which he has garnered several prestigious nominations including a César (the French equivalent of an Oscar).

For Aniko Papista, an invited guest to the pre-screening in Monaco on November 30, “one important take-away from this movie has been that even though you may not be able to save the world on your own, you can do your own small part, and if everyone else does the same, we can make huge changes collectively”. The Principality, in the presence of its sovereign and the movie’s director and lead actors, had the privilege of pre-premièring Mia et le Lion Blanc because the production had benefitted from generous financial support of the Fondation Prince Albert II de Monaco and the Princely Government – and need one say, “naturally so”, as it falls squarely into Monaco’s agenda of promoting awareness for ecological and environmentally-protective topics. 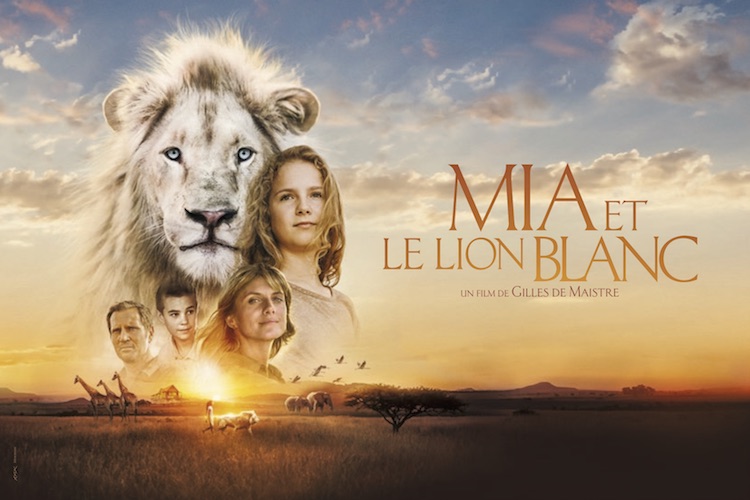 Opening widely across France on December 26 and 27, this is intelligent, thought-provoking, educational storytelling at its finest wrapped in a thoroughly enjoyable family movie absolutely not to be missed.