The “Timeless Immortal Art” project gives Merì a definite place in the history book, and enduring fame to 60 artists from all over the world. But beyond that, it is also a beautiful tale of synchronicity and kindness

Merì, a quiet, nondescript town with medieval roots on the North-eastern shores of Sicily, 35 km west of Messina, home to 2,300 souls. Life is pleasant but uneventful, apart from the annual calendar of convivial local community festivities. This is not exactly the place you’d expect a revolution to take place. And yet, it did. An art revolution, to be precise, and one that is turning one of the smallest and most anonymous towns in Italy into an eternal open-air museum, unique in the world.

The innovative project primarily involves the installation of terracotta tiles, painted and donated by 60 international artists. These tiles replace the traditional plaques on the walls indicating the names of town streets and squares. The idea is to form a cultural pathway and a timeless permanent exhibition, ensuring that the artists’ names will forever be connected with Merì and known to the world. 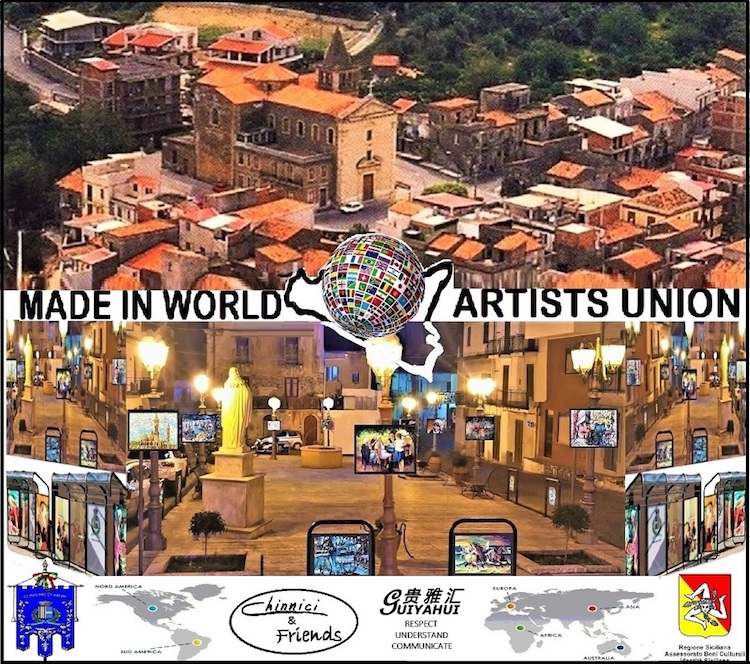 But that’s not all: this one-of-a-kind project, unprecedented in the world, even surpasses the limits of modest Merì and goes on to span the globe: Several countries around the world collaborate in this endeavour and even reproduce it locally. China is the principal partner, creating coordinated projects in ten cities. The Ukrainian city of Kiev also prepares to integrate this project in its cultural events. Other countries have signaled their interest as well.

But Merì wants to be more than an open air gallery and “the epicentre of micro monuments dedicated to artists”. Its ambition is to change the way how art is perceived within an urban context… to create a model of cultural rebirth. “The essence of this project is to reposition art as a unique language. If everything in art is created for the sake of art, if art is democratic, free and open for all, and pure, it can save the world,” Francesco Chinnici, one of the initiators of the project, describes his vision. “Our project is the future of art, with no money involved and no commercial interest attached.”

And this artistic and cultural uprising is also the story of six people who are smart enough to recognize an opportunity when it presents itself, and to make the most of it, reaching across continents and the confines of our current times.

Merì is home to Lorenzo and Francesco Chinnici, father and son. A painter of international renown, Lorenzo Chinnici has exhibited all over the world but he prefers the quiet anonymity of his Sicilian studio. He is the community’s pride and joy, and there is even a painting contest that bear his name. His son Francesco inherited his father’s artistic talent but is also a savvy event organizer with ties to international personalities. 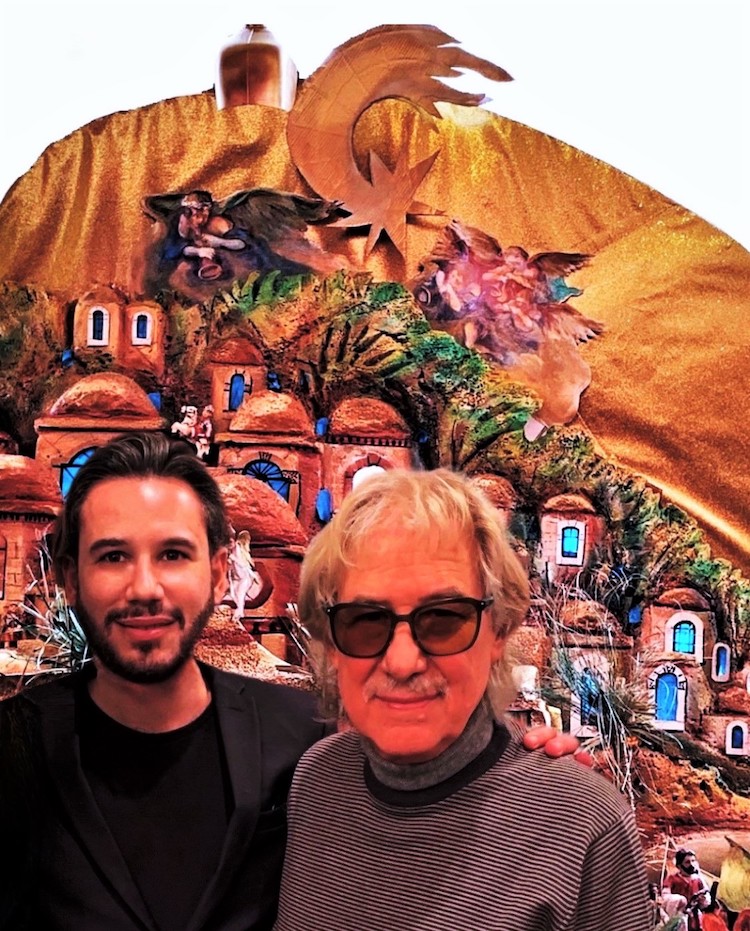 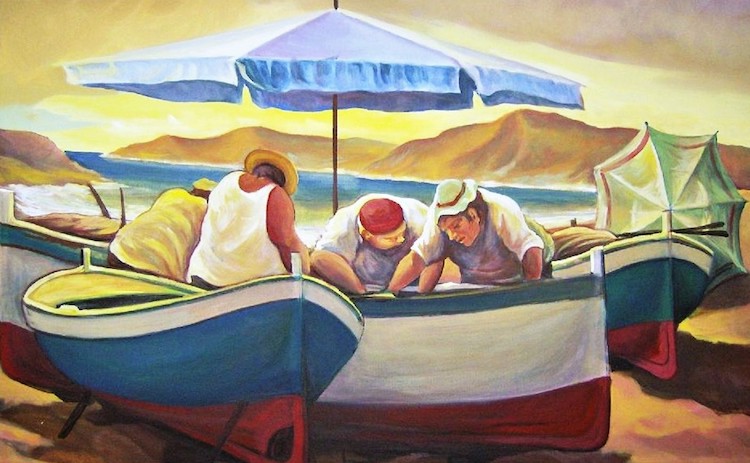 To honour the now 79 year old maestro’s life and work, Merì’s municipal councilor in charge of culture, Carmelo Arcoraci suggested to dedicate the town streets and squares to him and other artists – an old dream of the maestro’s. Francesco Chinnici explains: “My father, sig. Arcoraci and I all shared the opinion that we must all join together, not think only about my father, but if you are a Master, you have to give space to everybody, to other artists from all over the world, so why not turn the entire village into a celebration of art?” The three developed the concept which the city councilor tenaciously and passionately pleaded to Mayor Filippo Gervasio Bonansinga. The sindaco in turn had the strategic vision and the administrative leverage to nod this idea off, and was full-heartedly behind it. And so was the entire town. And in a first step, local bus shelters were decorated with Lorenzo’s artwork (see title photo). 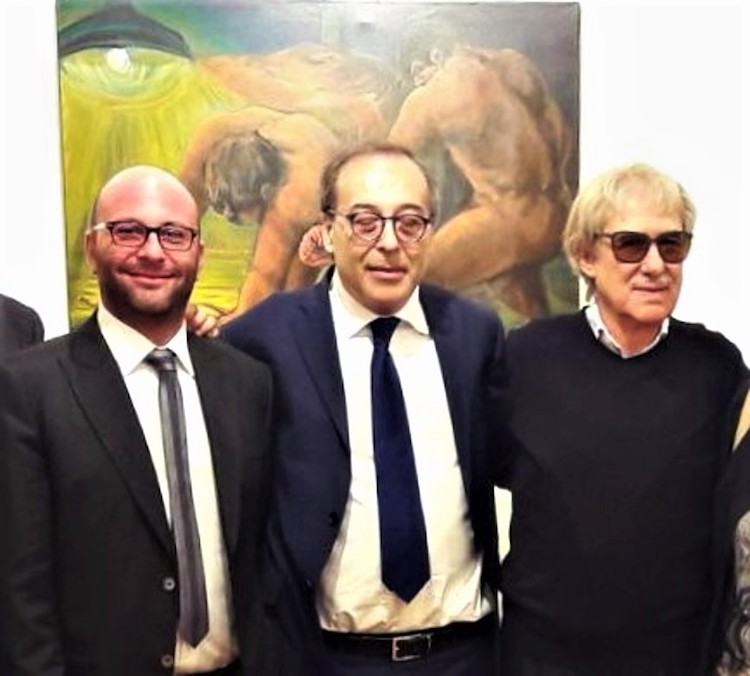 Thanks to its artistic expertise and excellent contacts, the famous father-son Chinnici duo acts as the bridge to artists and personalities all over the world. They tapped other central figures to join the project, among them Emma XingYi Wang, the partner for its Chinese extension, and English expat Craig Warwick, a long-time resident of Merì and also a visionary painter and author. Both gladly accepted the invitation to participate.

These six – Lorenzo and Francesco Chinnici, Filippo Bonansinga and Carmelo Arcoraci, and Emma XingYi Wang and Craig Warwick – came together to develop the project step by step. Their call for entries was answered by 2,000 artists willing to participate, 60 of which were eventually retained, hailing from 36 nations. “We called it Chinnici & Friends, a bit like Pavarotti & Friends,” Craig Warwick says. The installation and inauguration of the first artistic tile in spring 2021 will be accompanied by an “Ave Maria”, performed by celebrated Russian soprano Ekaterina Adamova. 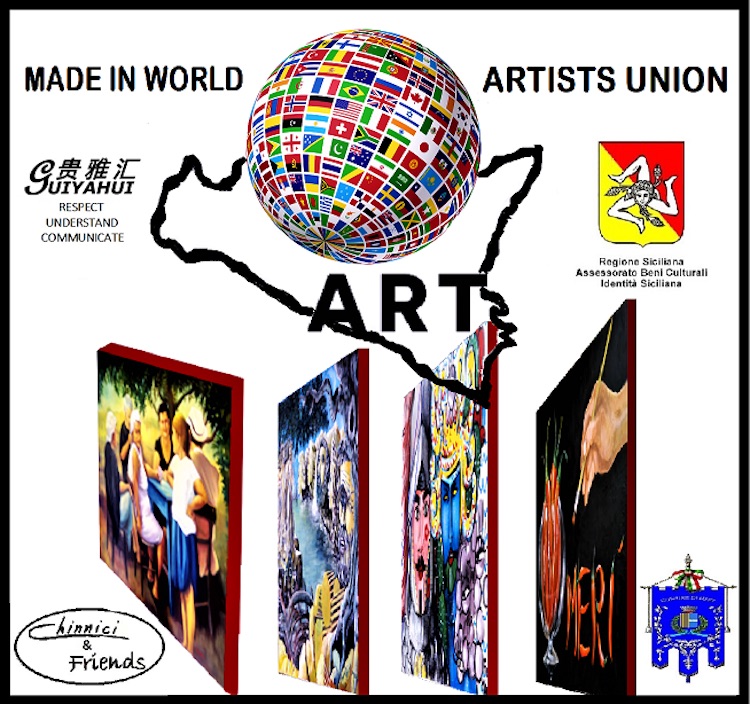 If Lorenzo Chinnici is famous for his strong contrasts and his observation of the strength and physicality of the human body, fellow painter Craig Warwick is located in the opposite realm. His work is ethereal and spiritual. And for good reason: the expat from London is also known as The Man Who Talks To Angels. He is a noted psychic, who in his life “before Merì” was the confidant of personalities like Princess Diana and Kate Winslet, as well as a consultant in high-profile criminal cases.

Craig Warwick tells us that during a near brush with death 12 years ago he had an encounter with angels who redirected him to a new life as a painter, and it just so happened that he would wind up in Merì. “I do not consider myself an artist but the angels are still by my side. That is why I wanted to design an art work, the wings of an angel, for the project,” he says. “They connect you to your own angel.” 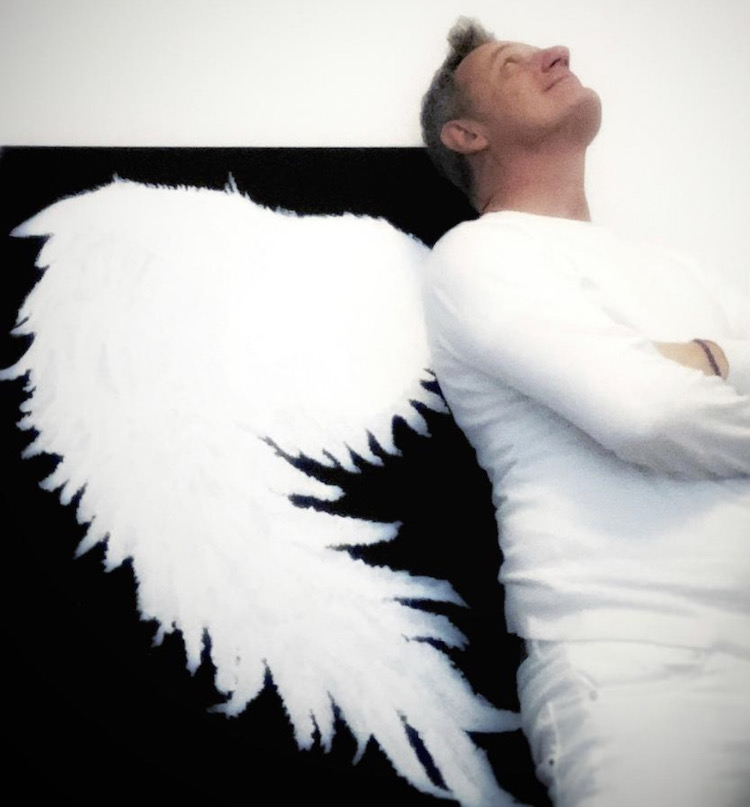 Craig Warwick in front of his painting

And if China comes into the equation, it is also for good reason – and there is a beautiful story of friendship and kindness behind it. Through his work as an international events organizer, Francesco Chinnici has connections all over the world. One of his great friends – and an admirer of his father Lorenzo – is Emma XingYi Wang, the president of G&Y Cultural Exchange Association from Shanghai and Florence. She would become the link to the Chinese project.

In January 2020, when Covid-19 broke out in China and forced the country into a brutal lockdown, Merì sent a message of hope to Emma by inviting Chinese artists to participate in its cultural project, both in Sicily and in China – which has subsequently led to the project being replicated in several Chinese cities. Once the pandemic hit Italy as one of the first European countries – and especially hard – Emma thanked Merì in her own way and had the Chinese government donate a stock of 50 000 EC-certified disposable masks to Francesco and Lorenzo Chinnici. “You have involved us in an art project in our darkest period, we want to reciprocate. We greatly appreciate Master Chinnici’s art, this is a gesture in his honour”, she stated. The Chinnicis in turn donated these sorely needed masks to Merì and some neighbouring communities. 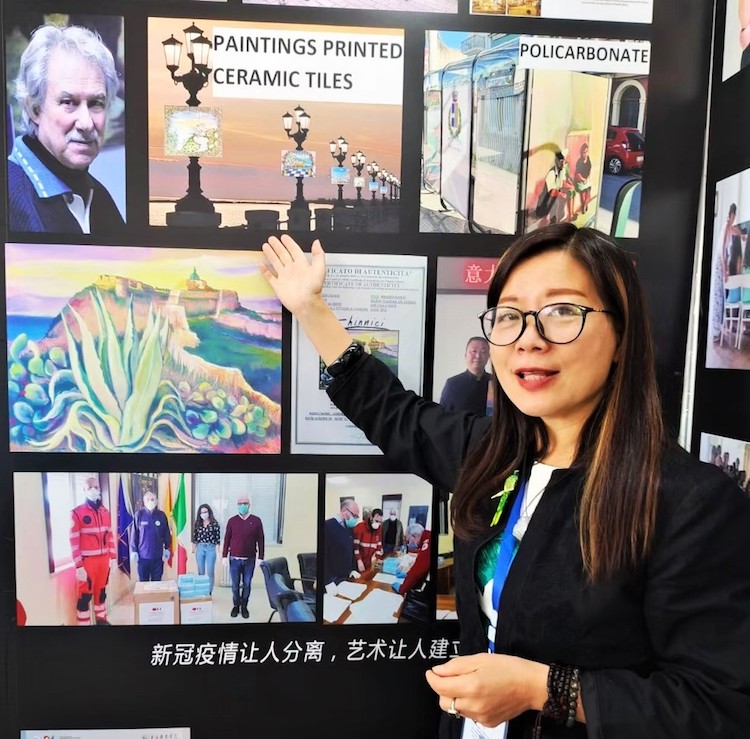 The concept has also inspired high-profile partners to participate in their own ways: Italian wine and gastronomy trade event Chebolle will present the project in collaboration with Il Mondo in un Bicchiere, a non-profit organization dedicated to promoting social, educational, cultural, informative, information of wine (for who says Sicily, says “wine”…). Gentile Exclusive Jewelry Dubai is creating tiles with moon and Mars stones, a symbol of immortality, to be donated to the host countries of the project. La Fauci’s Sicilian terracotta tiles are used to immortalize the works of artists. And fashion art designer Gisella Scibona will dedicate a line of 60 personalized dresses, referring to the individual works of the artists. The project is evolving and taking expansion on a daily bases as other countries and towns are interested to take part in this art revolution.

This story could end here, but it doesn’t. Yes, it is important to talk about a revolutionary project that has the potential to change the way art is thought of. Yes, it is natural to want to hear more about the people who initiated it and the artists who donate their time and talent. But this project also benefits someone else: it benefits the population of Merì, and all the villages, towns, and cities that reproduce the concept. Like pretty much every small Italian municipality, Merì had been abandoned by the young population years ago. They left in quest of employment and a more eventful life, leaving behind the elderly and causing these towns to die a slow quiet death.

But initiatives like this inject new hope: Tourists will come to visit the open-air museum that Merì is becoming. Some of them, like Craig Warwick so many years ago, may fall in love with the beautiful scenery and stay for good, bringing fresh blood and new ideas. International media will train their spotlights on Merì and its talented artists. And a rejuvenating wind will blow through the quiet streets, thanks to a beautiful collaboration of artists willing to give, a city administration willing to act, and fortuitous timing. “Timeless Immortal Art” indeed, and a cultural and urban model not only to copy but to strive for. 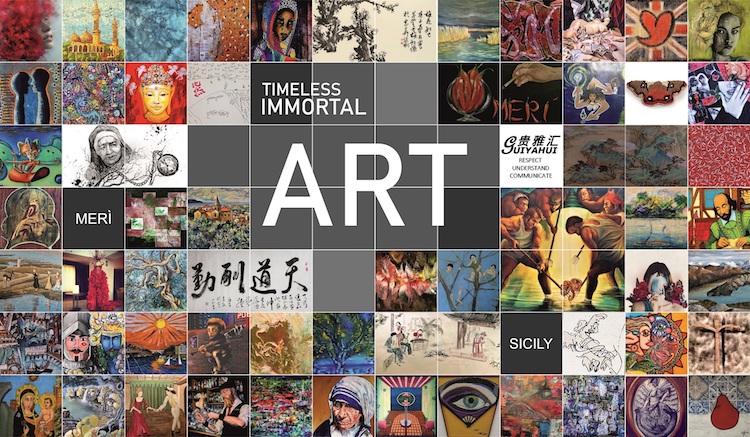