Albuquerque, New Mexico – less prominent than sexy Santa Fe – is not just the city where your plane lands. It is a colourful town seeped in Native American and Spanish history that’s surrounded by natural beauty.

It is a romantic getaway or a family vacation and planning to sample unique cuisine or learn about the rich cultures that make New Mexico the Land of Enchantment. It has hip neighbourhoods, places that illuminate its American Indian and Western heritages, and internationally acclaimed art galleries.

Thanks to favourable air currents formed by the Sandia Mountains (The name Sandia comes from the Spanish word for watermelon; as the sun sets, the mountain turns a bright pink), cool mornings, 300+ sunny days a year and wide open spaces, Albuquerque is the hot air ballooning capital of the world. From the 6th to the 14th of October, more than 700 balloons drift across the city’s turquoise skies during the Albuquerque International Balloon Fiesta, the world’s largest annual ballooning event. Ballooning is a year-round activity in the city, and there are plenty of companies that let you experience the thrill of ballooning any time of year.

This is a charming, albeit touristy, spot, where you’ll find souvenirs, including Indian blankets and turquoise jewelry, pottery, rugs and playful alien items. The 10 blocks around its central plaza include art galleries and restaurants. Musicians frequently perform in the plaza square.

At the American International Rattlesnake Museum, you can enjoy learning about this ecologically important reptile, as well as New Mexico’s other desert-dwelling critters. The Rattlesnake Museum is an exciting and educational experience for the entire family. This animal conservation museum reveals the hundreds of ways that rattlesnakes and other “less desirable” animals have influenced our lives. Examples are given through artifacts, memorabilia, and the largest collection of different species of live rattlesnakes in the world. In fact, the Rattlesnake Museum hosts more different species than the Bronx Zoo, the Philadelphia Zoo, the National Zoo, the Denver Zoo, the San Francisco Zoo, and the San Diego Zoo, all combined! Species from North, Central, and South America are presented in beautifully recreated habitats. Myths are explored, phobias cured, and mysteries revealed at this must-see Museum of the Southwest. It’s a wonderful way for your family to share in this fascinating, mysterious, and misunderstood corner of the animal kingdom.

Get Your Kicks on Route 66

Albuquerque boasts one of the best preserved stretches of Route 66 in the country. All along Central Avenue, neon-lit hotels and restaurants from Route 66’s heyday attract photographers and enthusiasts from around the world.

The Beer’s Chilly and the Chile’s Hot

New Mexico is world-famous for its chile-based dishes, and Albuquerque is a foodie’s mecca. Many local restaurants in the area all battle over bragging rights for the best traditional New Mexico cuisine, and only you can be the judge. And to help with all that chile, Albuquerque has a robust craft brew scene that’s earned a place on the beer lover’s map.

Western New Mexicans, so far from the beaten path, have always enjoyed a refreshing live-and-let-live tolerance. Half of the population is new, so nobody harbours any negative attitude against strangers. The land is as inviting as the people and the short drive (a little more than 2 hours) from Albuquerque to west central New Mexico encompassing El Malpais, El Morro National Monument and the Zuni Mountains offers incomparable year round outdoor experiences sure to appeal to casual visitors, hikers, mountain bikers and cross country skiers alike. From the jagged black rivers of lava in El Malpais to ponderosa pine in the Zuni Mountains to El Morro National Monument – be curious about what you see while hiking. Geology, plants and animals, Indian legends, local folklore and history. El Malpais lies in the southeastern portion of the Colorado Plateau, in the Acoma Embayment.

Also known as Sky City, Acoma is the oldest continuously inhabited community in North America, sitting nearly 370 feet above the desert floor and offering beautiful views for miles. The hour-long drive from Albuquerque is a winner, too, with spectacular rock formations under grand blue skies. Friendly tour guides, many of whom grew up here, tell the history of the more than 300 adobe and sandstone structures, which are owned by pueblo women, and take visitors inside the San Esteban del Rey Mission, completed in 1640. Many residents sell their distinct pottery from tables outside their doors. If you’re able, take the somewhat steep walking trail down after the tour, instead of the bus, and look for the kissing rocks. Before you go, be sure to read up on etiquette rules, including appropriate dress and camera restrictions. 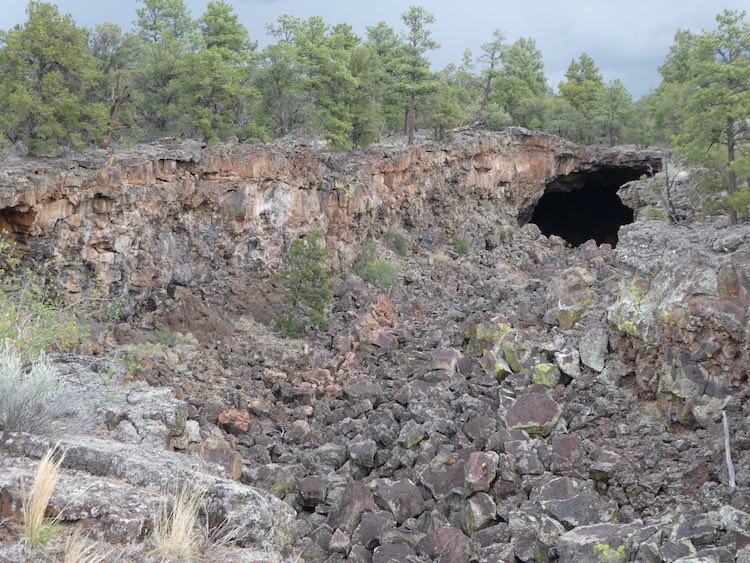 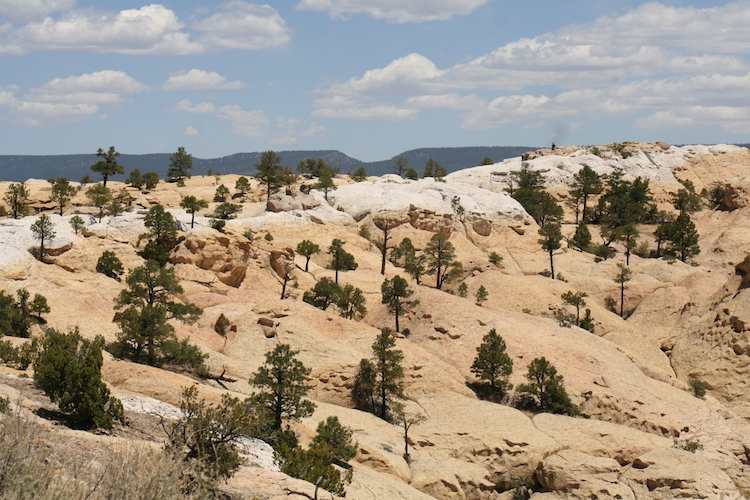 The earliest spanish explorers, encountering the black rivers of lava, called it El Malpais, ‘The Bad Country’. Unwilling to risk boot leather or horses’ hooves, they rode around it. Pueblo people built trails through the badlands and bridged crerices by piling up lava rock level with the rim. It holds a wealth of sights for the visitor looking for something different. For the geologically inclined, El Malpais is a rugged paradise. One of the world’s youngest lava flows — named McCartys — gushed forth here just 2,500 to 3,000 years ago, and it features some of the most pristine examples of lava formations on earth. Older flows, some dating back 115,000 years, formed a network of underground tubes stretching for 17 miles — the longest such system in the continental United States. Thirty cinder cones, volcanic remnants far more ancient than the main lava fields, rise along the horizon. In other words, El Malpais is like a pop-up textbook of the magmatic forces that shaped our planet. It lures with a raw otherworldliness that, at the same time, is so obviously of this world.

Lava tubes: tunnels in the lava that occur alone and in series. Lava tube caves are created when the surface of flowing lava cools. Walls of rock solidify along the sides of the molten river, and a hard crust encases the top. Hot lava pumps through this basalt pipeline, channeling deeper into the earth until the eruption stops. As the lava flows out, it leaves behind a tunnel.

Candelaria Ice caves: The temperature even in the summer is never above freezing.

Imagine going to a place where you could find the autographs and comments of George Washington, Columbus and Ulysses Grant etched into the wall?! El Morro with its collection of significant graffiti in sandstone, is such a place. The eldest name is none other than Don Juan de Onate, the first governor of New Mexico under Spain. Returning from exploring the Gulf of California, he carved this inscription on the 16th of April 1605. This was 15 years before Pilgrims landed in Plymoth Rock. The first American army officer came to visit El Morro in 1849, Lieutnant J.H. Simpson together with the artist R.H. Kern. 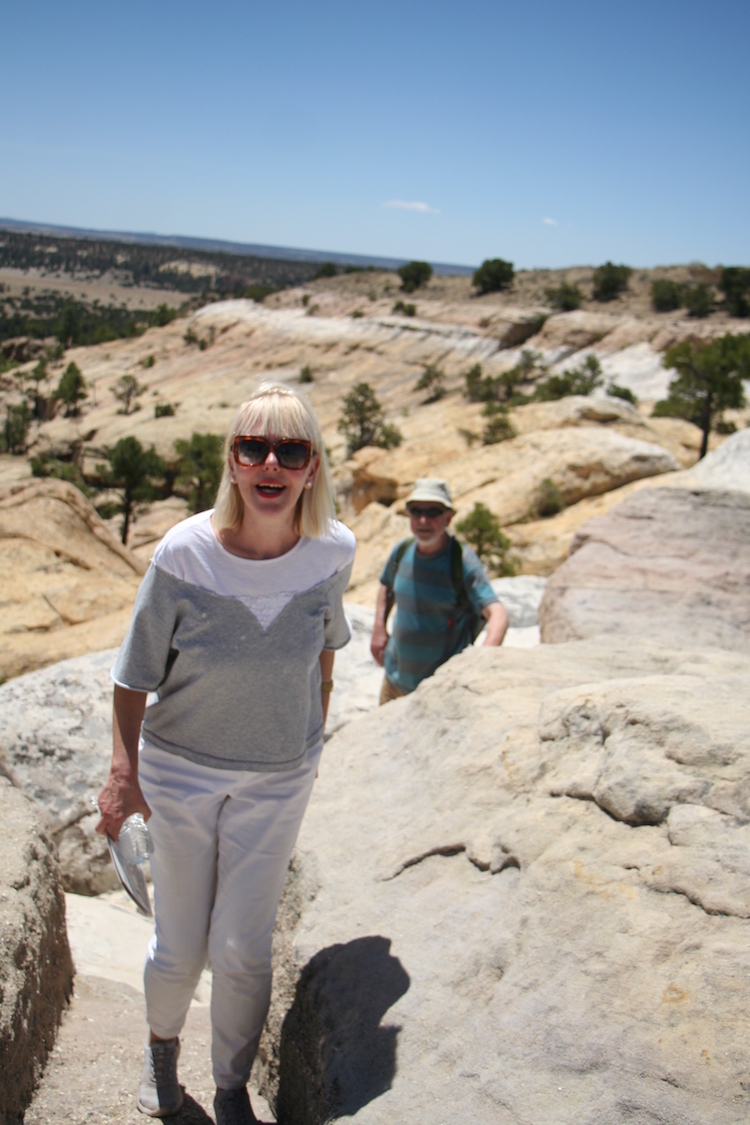 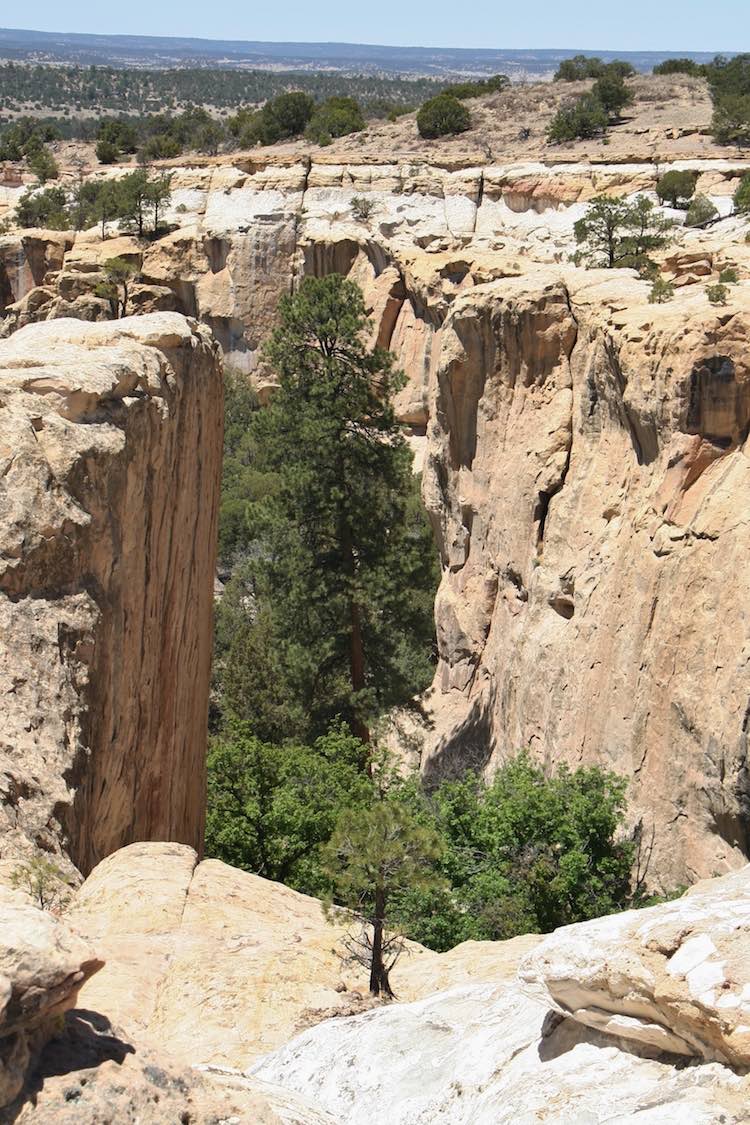 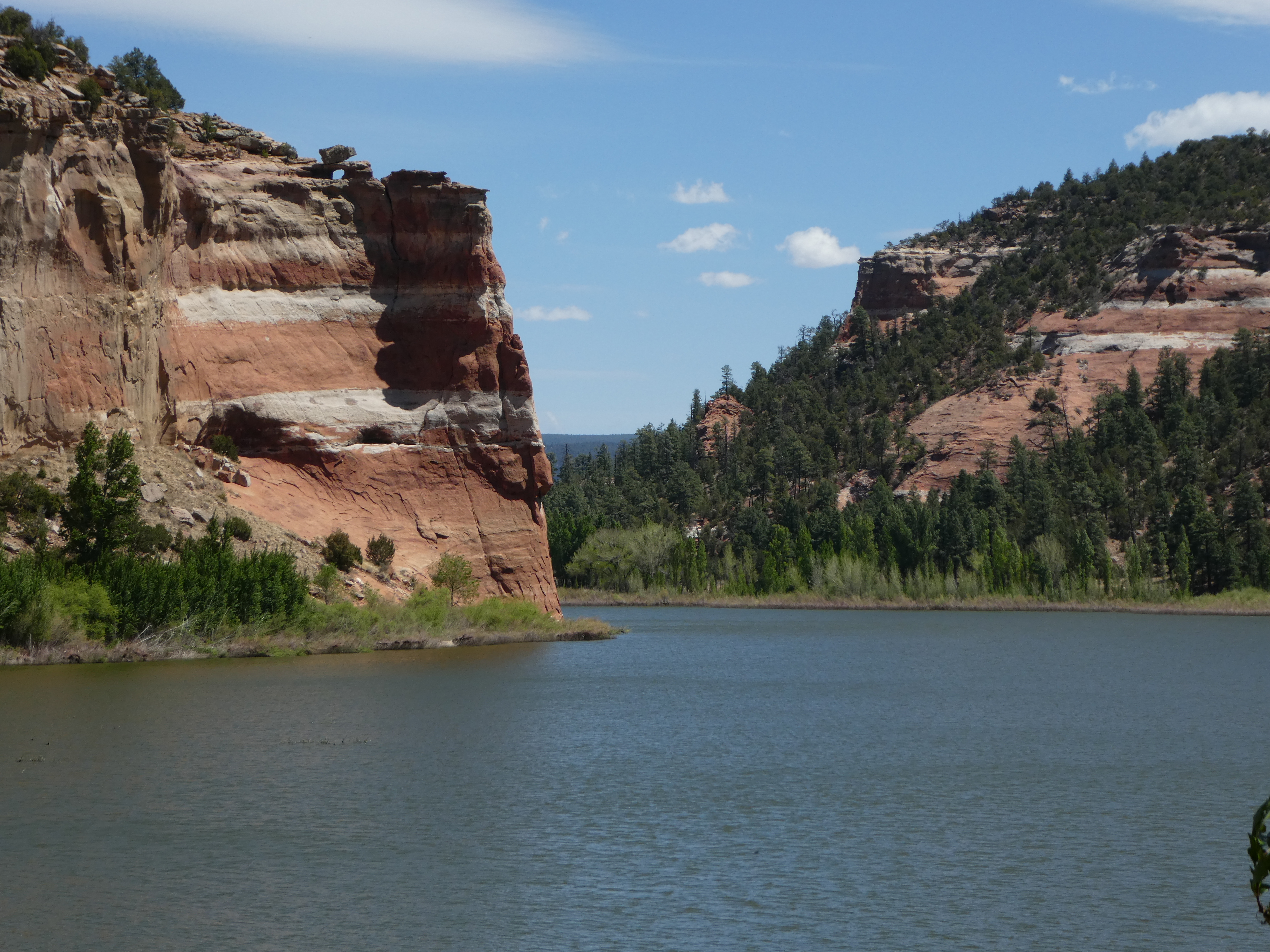 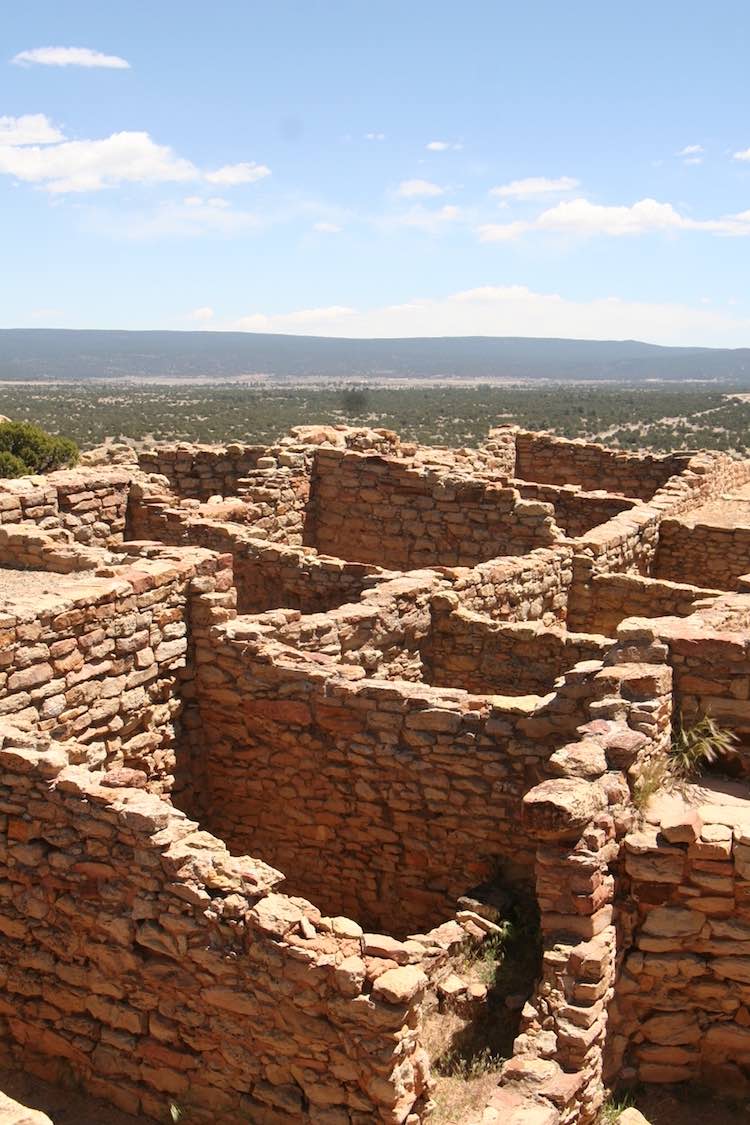 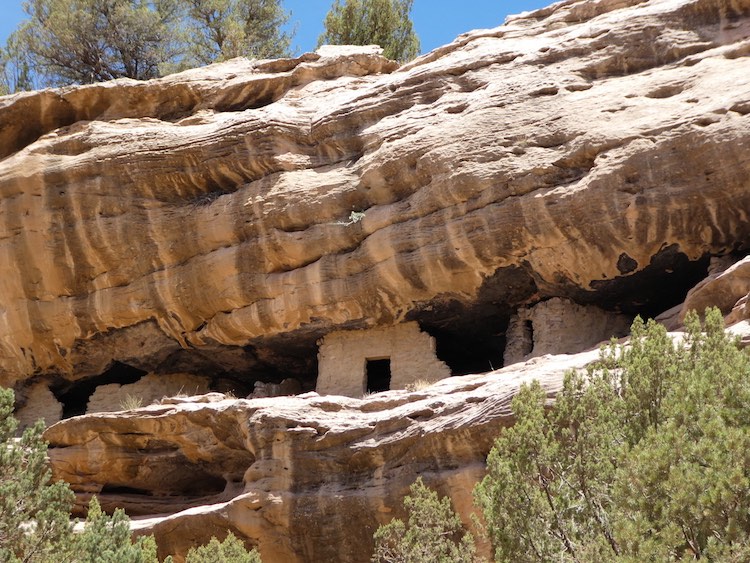 Beside being a remarkable historical monument, El Morro’s lone trail is one of the most scenic in the state and one of my favourites. Trailsigns inform you about the plant life, which includes lemonade sumac, one-seed juniper, narrow-leaved and broad-leaved yucca, four-wing saltbush, Rocky-Mountain juniper and pale wolfberry. Birds seen in the area include swallows, swifts, owls, quail, hummingbirds, woodpecker, fly-catcher, spurred towhees, prairie falcons, wild turkeys, bluebirds, blackbirds and many more.

The trail winds around the north side of the butte and begins a traversing climb to the top. To the north is a fine view of Oso Ridge and the Zuni Mountains. These were formed in the Jurassic period, as winds dropped their sandy load to form sandy dunes that ultimately became Zuni sandstone.

Ramah Lake is a fifty acre lake just outside the town Ramah, surrounded by red cliffs – one of the prettiest settings in the state. Fishing here, from the short or by boat, is good for both trout and bass. Ramah Lake is also considered one of the state’s small lakes suitable for canoeing. 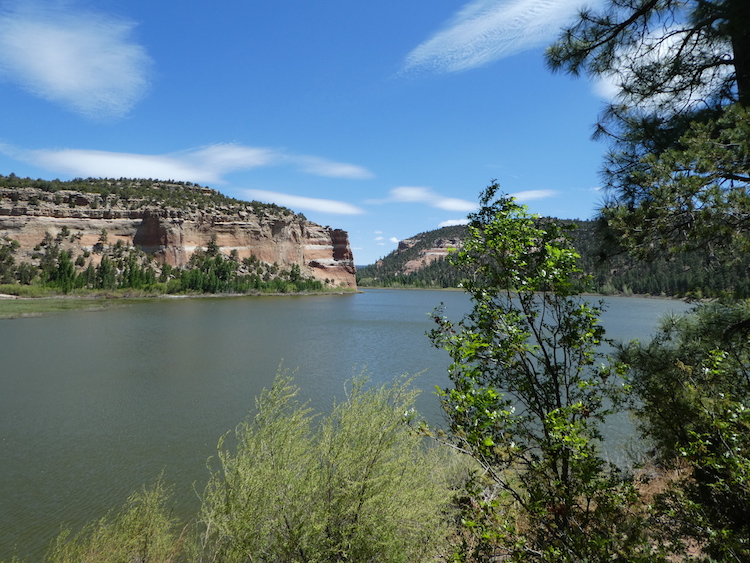 Special Conditions: Ramah lake is a no-wake lake (no whitewater off the bow or sides of the vessel. Use minimum speed necessary to maintain some forward motion). Bring Sunscreen and bug repellent (the bugs that make for good fishing). Water levels are variable with lots of weedy vegetation at low levels. Launching may be a problem for any small motorized vessels.

Last but not least to all mountaineers, backpackers, and other high-country weekend warriors: At high elevations, there’s less oxygen in the air for you to breathe in. When you travel from a low elevation to a high one, your body needs time to adjust to the lower levels of oxygen reaching your bloodstream. Eventually, your respiration and heart activity increase and you produce more red blood cells to transport the oxygen to where it needs to go. Then you feel back to normal. I got a bloody nose and HUGE appetite without gaining weight, that is the good news!! 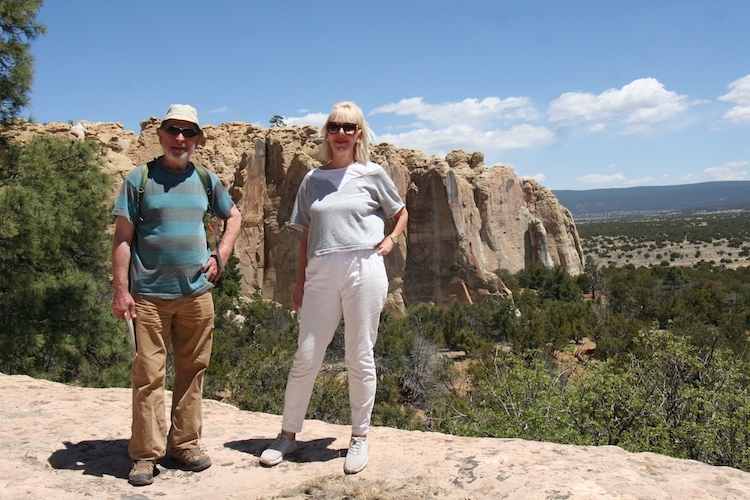 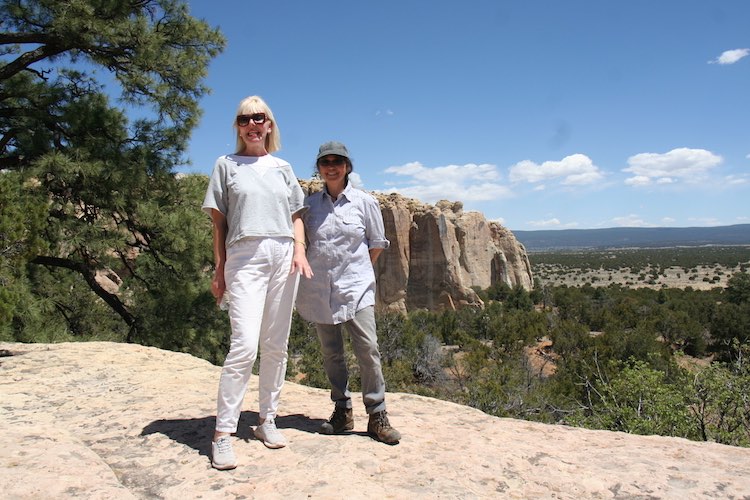 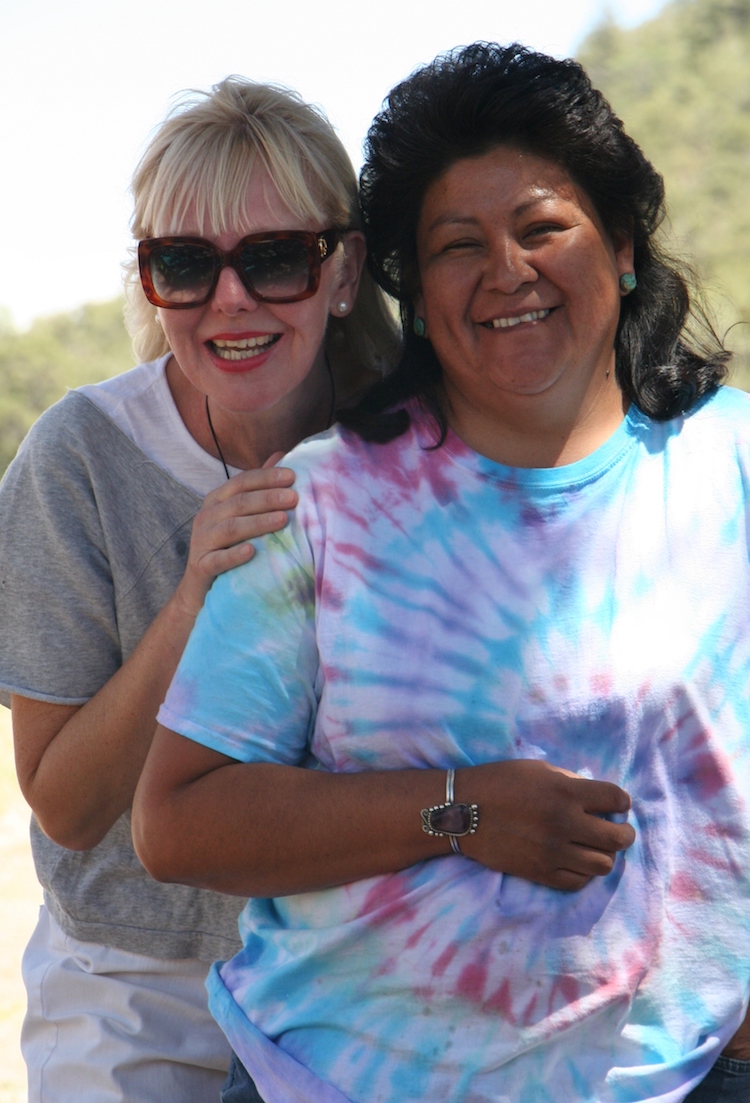 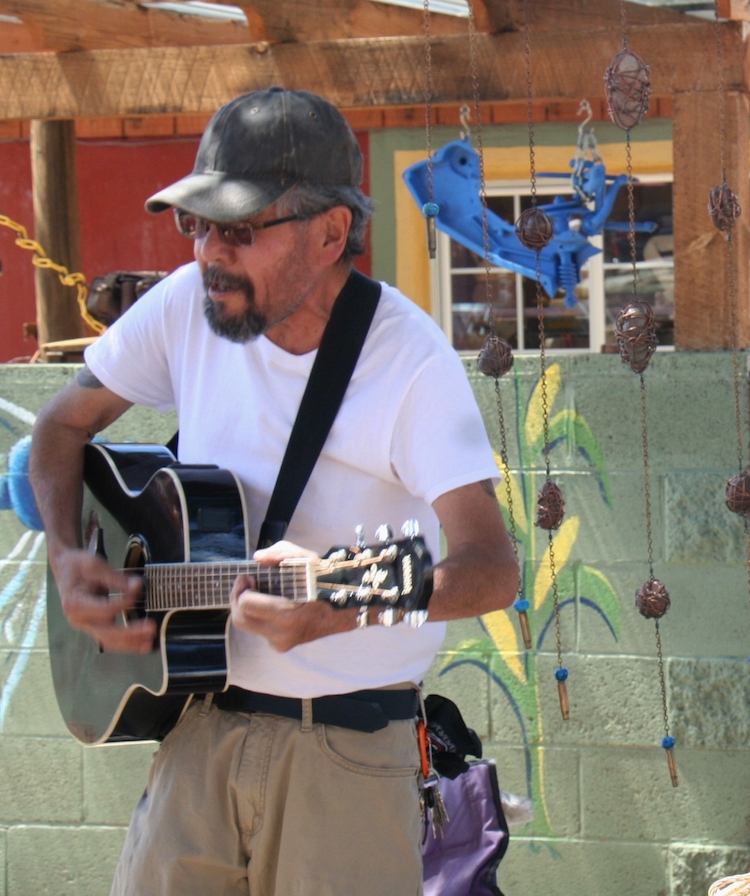 Thank you Pati and Martin, I will definitely come back. Land of Enchantment, you are so worth it!

To find out more, check out the highly recommended book by Sherry Robinson: El Malpais, Mt. Taylor, and the Zuni Mountains: A Hiking Guide and History

All photos by Pati and Martin Gutzat, courtesy Sabine Noelle-Wying