Our planet, in all its natural and human diversity, is at the heart of Yann Arthus-Bertrand’s talk and exhibition this December in Monaco.

Known around the world for his environmental activism and for his extensive work that includes the 1999 book “Earth From Above” and the 2015 movie co-directed with Luc Besson, “Home”, French journalist Yann Arthus-Bertrand will be in Monaco this week to share his love for our planet and educate the public about the need to protect it.

It will all start this Wednesday with a lecture entitled “Vu du Cœur” (“A View from the Heart”), retracing his journey as a photographer of animals to the making of movies about his two mains concerns, the planet and mankind.

The following evening, Arthus-Bertrand will invite pupils from the Principality to attend the screening of his much acclaimed movie “Human”. For this deeply moving documentary, Bertrand spent three years collecting stories from more than 2,000 people in 60 countries, to recount heartfelt personal stories of poverty, domestic abuse and anguish, as well as tales of love and joy to perfectly depict the struggles and triumphs that unites us all as human beings. PLEASE NOTE THAT THE SCREENING IS NOW SOLD OUT! 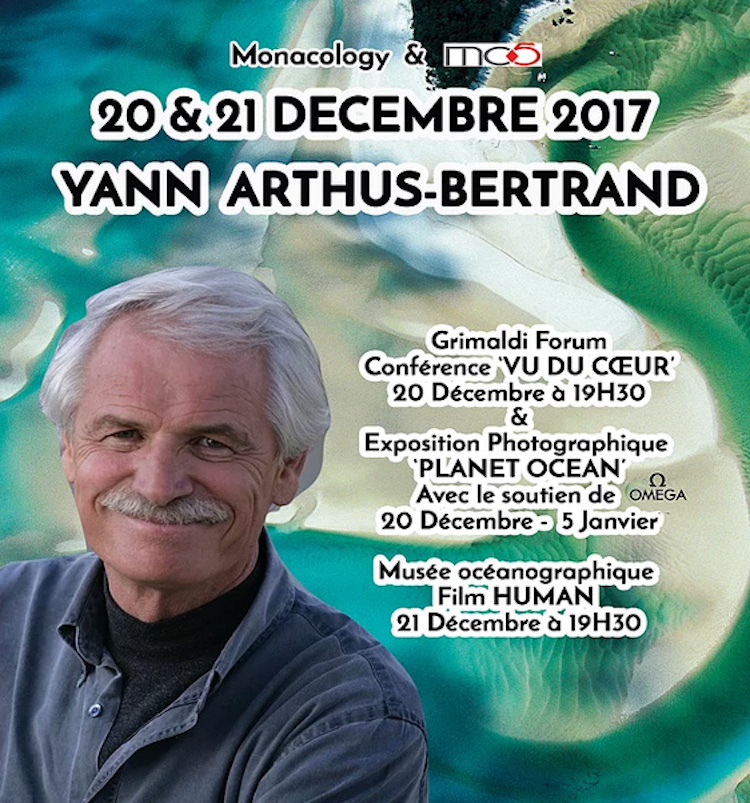 “I am one man among seven billion others”, the environmentalist said at the time of the film release. “For the past 40 years, I have been photographing our planet and its human diversity, and I have the feeling that humanity is not making any progress. We can’t always manage to live together. Why is that? I didn’t look for an answer in statistics or analysis, but in man himself.”

And that’s not all! Starting on Wednesday and running until 5th January, a beautiful free exhibition entitled “Planet Ocean” will be held at the Grimaldi Forum. Made up of 73 aerial images from Arthus-Bertrand and underwater photography by American Brian Skerry, it will highlight the crucial role played by the oceans in the balance of ecosystems and how it is important to preserve them.