T.S.H. the Prince and Princess of Monaco ensure that the timeless messages of South-Africa’s late legendary leader live on beyond his centennial birthday

On May 25, 2000, the eyes of the world were once again trained on Monaco. One of the greatest statesmen in history, South Africa’s recently retired president Nelson Rolihlahla Mandela, spoke at the Inaugural Ceremony of the Laureus Lifetime Achievement Award at the Sporting Club Monte Carlo, honouring another all-time great: Pelé, football’s global Ambassador, who like Mandela has dedicated his life to eradicate hatred and racism. It was not a fluke that this speech, hailed as one of the most important ones ever, would take place in Monaco. The Principality and the President had a longstanding history of mutual appreciation and shared interests, and Mandela enjoyed coming to the Rock whenever the occasion arose.

There certainly was already a strong connection through HSH Prince Albert II, inveterate sports enthusiast and the eminence grise behind this particular Laureus event. But since then, the even greater portion of the credit of maintaining the excellent relationship between “Madiba” and Monaco goes to Albert’s spouse, HSH Princess Charlène, the indefatigable champion of the Nelson Mandela Foundation and Fund. For many years, the former South African citizen turned Monegasque Royal has been the strongest link between Johannesburg and Monte Carlo, acting as an avid ambassador and representative for the causes that mattered to Mandela.

One of the key interests that connected Mandela with the Grimaldis, was sports. Between the three of them, they understand the federating power of sport better than most. Both the Prince and Princess were active Olympians, he as a five-time competitor in bobsleigh events, she as a swimmer. And Tata, as Mandela was affectionately known as, was a heavyweight competitive (although not professional) boxer for most of his life, a physical and mental exercise which helped sustain him during his 27 year imprisonment on Robben Island. 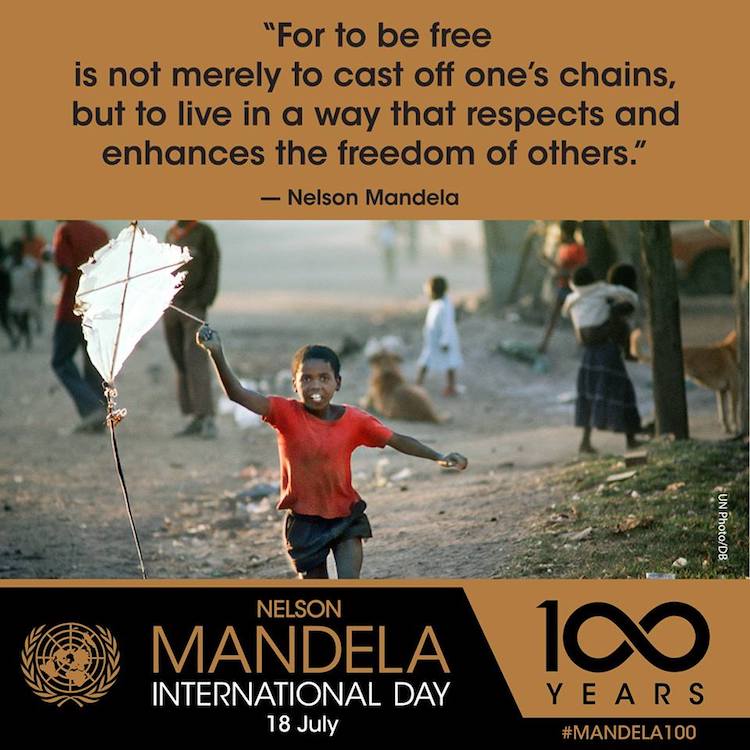 Small wonder therefore that in 2000, the South African freedom fighter gladly followed Monaco’s call to honour Pelé, the living God of football, or soccer as it is known in America, for his lifetime achievement as an athlete and a role model to generations. Like Mandela, Pelé has fought against discrimination throughout this entire life. But that event was by far not Mandela’s only appearance in the Principality. Another landmark visit occurred in September 2007, when Prince Albert II and his sister HRH Princess Caroline of Hannover, hosted a charity gala in the presence of the great Elder and numerous illustrious personalities from the world of business, arts, culture, and sports. Donations and a charity auction yielded a collective €2.5 million for the Peace Nobel Prize winner’s foundation benefitting underprivileged children. This cause circles straight back to Princess Charlene who – although not yet a member of the Grimaldi family at the time – was already highly involved in Mandela’s humanitarian engagement.

“I remember that in 1995, during the Rugby World Cup in South Africa, Nelson Mandela walked onto the field wearing a Springbok jersey representing unification and freedom within our nation. In that same year, he launched the Children Foundation. I was 17 years old. I admire Nelson Mandela for his courage, it changed the course of history. The suffering he endured made him a unique person. This is why I am so proud to bring my contribution to the Nelson Mandela Fund. However, the work has just begun; a lot more remains to be accomplished.”
— HSH Princess Charlène of Monaco

Over the years the Monegasque Royals have officially and unofficially visited South Africa many times to show their ongoing support with Nelson Mandela’s humanitarian causes, not forgetting his appeal to sports as a great federator across nations, color, and race. Inspired by Tata’s appearance in the Springbok jersey, the Fondation Princesse Charlène de Monaco, in conjunction with the South-African Rugby Legends Association and the Monegasque rugby federation founded an annual international tournament in 2015 which along with sportsmanship focuses on tolerance, exchange, and solidarity as universal messages.

This month, Princess Charlène is back home in South Africa working for some of her local charities, and representing Monaco in Johannesburg during the official celebrations of the centenary of Madiba’s birth. Also in attendance at this milestone event, another world leader who is increasingly getting involved in the Mandela legacy: former U.S. President and fellow Nobel Peace Prize winner Barack Obama who delivers the 16th Nelson Mandela Annual Lecture on 17 July 2018. On 18 July, the actual anniversary, the entire world is called to observe Mandela Day, a global call to action that celebrates the idea that each individual has the power to transform the world, the ability to make an impact. The Mandela Day campaign message is, “Nelson Mandela has fought for social justice for 67 years. We’re asking you to start with 67 minutes.” The 2018 key themes are shelter, volunteerism, education, literacy and food security.

In today’s frenetic world, Nelson Mandela’s voice of reason, calling the world to practice the values of tolerance, equality, and compassion, is much missed and even more needed. But while his trademark raspy voice has left the world when he passed away in December 2013, aged 95, his messages are staying behind, timeless and strong. Open-minded leaders with a global mindset like Prince Albert and Princess Charlène have taken the baton to ensure his legacy continued to be heard, put in practice and handed down to the next generation so that Madiba may rest in peace on his 100th birthday on July 18, and beyond.

Sport has the power to change the world. It has the power to inspire, it has the power to unite people in a way that little else does. It speaks to youth in a language they understand. Sport can create hope, where once there was only despair. It is more powerful than governments in breaking down racial barriers. It laughs in the face of all types of discrimination.

The heroes standing with me are examples of this power. They are valiant not only in the playing field, but also in the community, both local and international. They are champions and they deserve the world’s recognition.

Together they represent an active, vigorous Hall of Fame. A Hall of Fame that goes out into the world, spreading help, inspiration and hope.

Their legacy will be an international community where the rules of the game are the same for everyone, and behaviour is guided by fair play and good sportsmanship. I ask you now to rise and join me in commending the original inductees into the World Sports Academy Hall of Fame.

It is now my great pleasure to present a very special Laureus award – the Laureus Lifetime Achievement Award – given to a world athlete who exemplifies the highest virtue of sport, honour, courage, joy and perseverance. Our first honouree is a man who is both an athlete for the ages and a beacon of hope for the millions.

He began life in poverty and rose to the highest level of fame. To watch him play was to watch the delight of a child combined with the extraordinary grace of a man in full.

Ladies and gentlemen, it is my honour to present the inaugural Laureus Lifetime Achievement Award to Edson Arantes do Nascimento or as he is known to world – Pelé.
Pelé is in Rome tonight to join with other world soccer stars in an international football match for peace.

Congratulations to the great Pelé. You are an enduring model for all athletes. In fact, for all of us, to admire and emulate. Thank you and good evening.

Ladies and Gentlemen, peace is the greatest weapon mankind has to resolve even the most intractable difficulties. But to be an effective agent for peace, you have to seek not only to change the community and the world. What is more difficult is to change yourself before you seek to change others. Only those who have the courage to change themselves and to know that in all communities without exception there are good men and woman who want to serve their communities.

In regard to the peaceful resolution of their problems and it is absolutely essential for the leaders of the community and the world to create an atmosphere where those good men and woman can show their maximum abilities in trying to resolve problems in a peaceful manner and that is why a legend like Pele and all of these behind me are our heroes, our hope because whatever they do in their respective fields they are promoting peace. These are monarchs, they are queens and kings, not as a result of heredity, but as a result of their personal commitment and efforts. It is one of the most enjoyable moments for me to be able, as a pensioner take part in a function of this nature.