The Principality reaffirms its ongoing and tireless commitment to the protection of the Big Blue with Monaco Ocean Week, a high-profile weeklong event open to the public

Rising sea levels, deoxygenised marine and coastal waters, and ocean acidification are only a few of the many current threats to ecosystems. These dangers, however, also encourage raised awareness. The second Monaco Ocean Week from April 8 through 14 aims to provide solutions to protect marine environments faced with climate changes. The Prince Albert II of Monaco Foundation and its partners therefore invite the public to meet local and international organisations, scientists, politicians, funders, filmmakers, chefs, and adventurers in a diverse series of events around marine conservation and the sustainable development of a « blue » economy.

The Foundation’s Monaco Blue Initiative (MBI), a think tank whose members focus on current and future global ocean management and conservation issues, will launch Monaco Ocean Week with a multitude of events and conferences/debates, simultaneously held throughout the Principality and in Edinburgh on April 8 and 9. The event will carry on in Monaco through April 14 with conferences, workshops, symposiums, seminars, award ceremonies, exhibitions, documentary film screenings and public awareness workshops at landmark venues including the Oceanographic Museum, the Science Centre, the Monaco Yacht Club and Stars’N’Bars.

9:00am – 1:00pm / Stars’N’Bars
“From the sea to our plates”: How to choose and consume sustainable seafood for a healthy ocean?

*Movie in English, subtitled in French. Discussion in English. 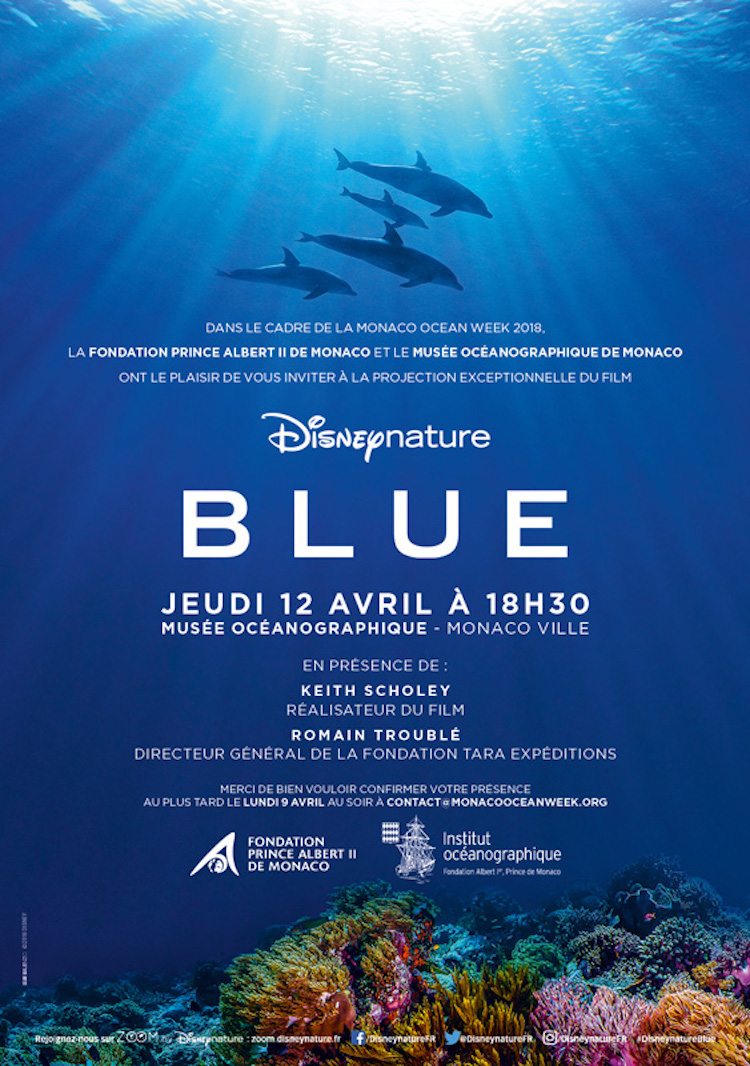 6:30pm – 8:00pm / Oceanographic Museum of Monaco – Conference Room
Exclusive screening of the latest film of Disneynature, BLUE: a dive in the heart of the ocean to discover, understand, love a world still mysterious and surprising.*

*To attend the event, please register by email

Presentation of the conclusions of the workshop on regional solutions to save coral reefs from ocean acidification and other environmental stresses. Presentation of the Presidency of the International Coral Reef Initiative, and screening of the movie “Chasing Coral” by Jeff Orlowski in the presence of the director Richard Verves, founder and president of The Ocean Agency.

In the words of H.S.H. Prince Albert of Monaco, “The Monaco Ocean Week is born out of the obvious need for major marine actors to share their analysis and vision of key marine conservation issues and take action for ocean preservation”. His personal commitment to the cause, and that of the Grimaldi family, is outstanding. Marine ecosystem awareness and conservation have been an integral part of the Principality of Monaco’s history since the end of the 19th century. A passionate explorer and dedicated scientist, Prince Albert I, the current Sovereign’s great-grandfather, was one of the founders of modern oceanography. Monaco’s commitment to the health and preservation of the oceans has continued throughout the 20th and early 21st century with numerous milestone accomplishments to its credit: in 1976 France, Monaco and Italy signed the RAMOGE Agreement to protect Mediterranean coastal waters. In 1982, the Principality of Monaco was one of the very first signatory States of the United Nations Convention on the Law of the Sea. And in 2017 Monaco dispatched its state-of-the-art research vessel Yersin on a three-year exploration of the condition of the world’s oceans (more on that soon to come here).

A landmark event not to be missed by anyone interested in the health of our planet and particularly the state of our oceans.