Charlotte Arnal, a young activist from Aix-en-Provence, is (quite literally) on her way to changing the French Constitution to give animals protected legal status

France takes great pride in being the Land of Human Rights but it is far from being the land of animal rights. Nowhere in the Western world do animals enjoy less protection than in the Hexagon. The French law – and with it, many French people – consider animals as exploitable objects or a commodity.

The sad consequences are felt everywhere. Shelters are overflowing with family pets that are mercilessly kicked out in the street to fend for themselves once they outgrew kittenhood, or the kids are tired of walking the dog. Raising and force-feeding geese and ducks simply for their prized foie gras (fatty liver) is considered perfectly normal. Regulations for lessening the pain and scare for cattle on its way to the slaughterhouse are casually violated. Hunting, including young deer and even songbirds, is a cherished pastime. Dolphins, orcas and other marine mammals live in cramped and unnatural conditions to perform at marine parks. Almost every traveling circus features exotic animals. Bullfights remain part of the cultural heritage. Fur coats are still a fashion statement of those wanting to publicly demo their tax bracket. And those who abandon, abuse, maim or kill animals are let off lightly, often only with a perfunctory warning.

But there are compassionate citizens who fight tooth and nail for their rights, trying to raise awareness for their dire situation. One of them is Charlotte Arnal. Having taken an active interest in animal wellbeing for many years, the non-protection of sentient beings and the increasing violence against them finally drove her to act.

The idea of a march was born one year ago. A peaceful march, inviting all those who are equally concerned about the fate of animals to either join her for a part of her journey, or to take action in their own ways. On October 4, 2019 – World Animal Day – the 37 year old woman from Aix-en-Provence set off on her 2,500 km walk. 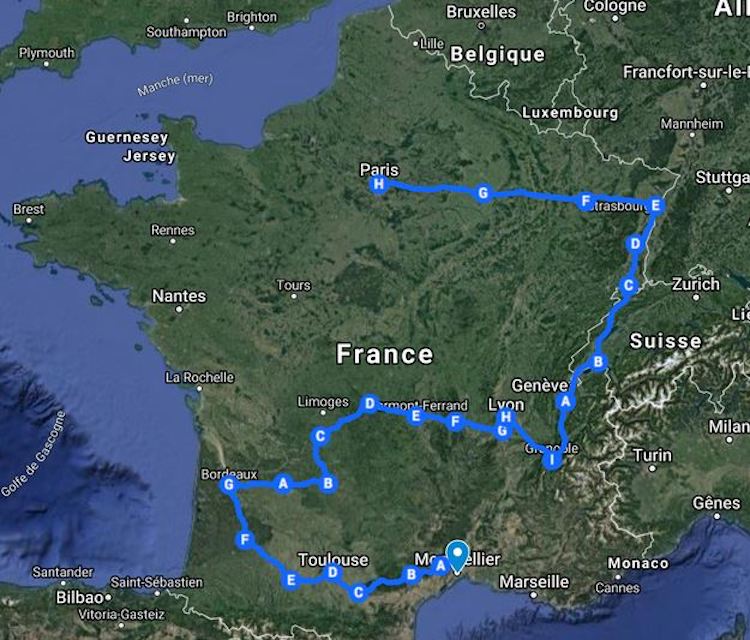 Only accompanied by Loulette, as she has affectionately baptized her 21 kgs backpack, Charlotte will crisscross the breadth of France three times. Having started in Montpellier, her route will take her past Toulouse, Bordeaux, Limoges, Lyon, and Strasbourg en route to Paris where she plans to arrive exactly one year later, on October 4, 2020. There, so she hopes, she will be able to convince the legislators of the French National Assembly to anchor respect for animals as well as their fundamental rights to a safe life and dignified death in the French Constitution.

It’s not non-stop walking though. On her way across the Hexagon, Charlotte – or Charlye to family and friends – stops and spends time to visit, listen, learn, debate, and convince. She goes to slaughterhouses, goose-breeding farms, and other mass exploitation facilities. She talks to local farmers, producers, consumers, and politicians. And she keeps a video diary on Facebook to share her experience, thoughts, and insights, chronicling her march and her encounters in a fun, tongue-in-cheek way designed to educate and raise awareness without dispensing stern lectures.

Usually Charlotte is on the road, braving inclement seasonal elements. Late fall in France can be quite harsh and wet, let alone the upcoming winter. She marches on, undeterred by rain, wind, early frost, and solitude. Often the landscape is bleak and desolate, with poorly maintained country roads. There are days when she has no human contact. Weather permitting, she camps in nature. (Sensibly though, she opts for indoor accommodation during the winter.) And then there are scheduled breaks for a couple of days when people or organizations sympathetic to her cause invite her in for a well-deserved rest.

In early November, one such early stopover was Sanctuaire/Ecolodge La Garie, 75 km south of Toulouse. Created less than a year ago by former Cannes residents Stéphanie Noël-Homs and George Homs, this sanctuary is home to almost 40 farm animals saved from a sinister end at the slaughterhouse, and a posse of cats rescued from the street or from abusive situations. (Stay tuned for an upcoming article about this unique place at the foot of the Pyrenées Mountains.) Here, Stéphanie and George set up meetings with groups of local and regional adults and children for an exchange with Charlotte. Their genuine interest to support not just the activist’s initiative but also improve the dismal conditions animals face today gives reason for cautious optimism that a greater movement is slowly getting underway. 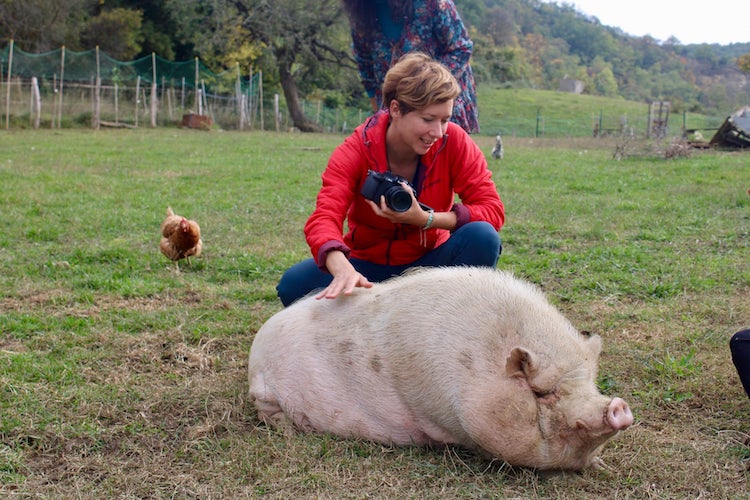 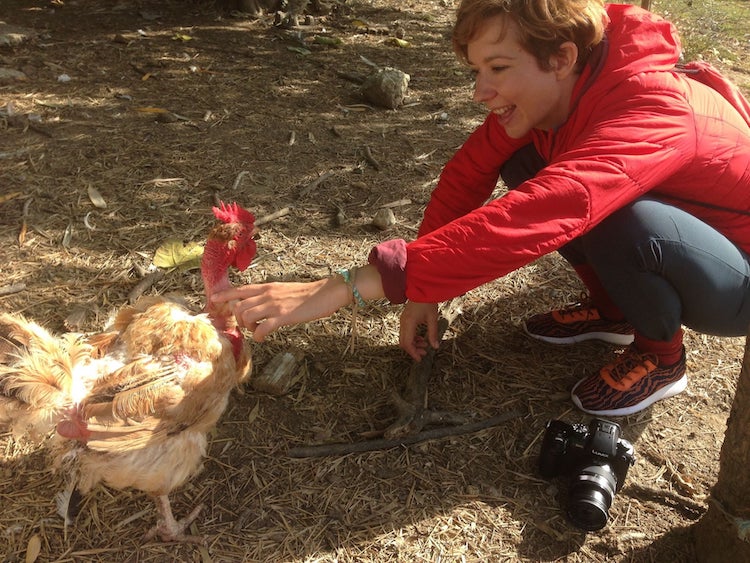 Back on the road again after four restful days, Charlotte continues her march and her mission. While beautiful encounters like that with Stéphanie and George nurture her soul, she still fights the occasional doubt whether it all makes sense. And discovers, en route, surprising facts not only about animals but also about humans. “Aren’t you scared?” is the question she gets asked most often. No, she is not. Angst – that condition so deeply ingrained in the French psyche – is foreign to her. As small and slight of a person as she is, she is neither afraid to walk or camp on her own nor to take on managers and bosses of commercial animal “production” sites. She is guided by a deep sense of purpose that gives her strength, courage, and power – anything else is secondary.

And slowly something else comes into focus: while women – givers and preservers of life – are usually very supportive of her cause, men often respond with sexist comments and macho attitudes, ranging from catcalls to jokes at her expense. Charlotte realizes that changing laws is one thing but changing minds is yet another challenge, and of an even bigger caliber. The equilibrium between masculine and feminine qualities has to be re-established to turn things around, she believes. It is not by coincidence that she has chosen the symbol V as her project’s logo:

Despite the downsides of her adventure, she remains positive and upbeat. What drives her to go on, day after day, mile after mile? Her motivation lies in her core value to do things mindfully, in harmony with the environment. “My eco-philosophy is characterized by defending the intrinsic value of living beings and nature, i.e. a value independent of their utility for human beings,” she says. Coming from such a broad perspective, she has increasingly zoomed in on the animal condition, seeking to question rather than condemn.

This spirit is also at the root of her project’s name, Humanisma. Charlotte explains that “humanism” is defined as a doctrine, a philosophical attitude, a movement of thought that takes Man as its ultimate and supreme value, and that aims at the development of the human person and respect for his dignity. While it associates the human species with noble values, it also connotes an anthropocentric vision of the living and must extend its definition to other non-human living beings. “Adding an A at the end of the word allows me to designate a reinvented, inclusive humanism. I like the sound of Anima, from the Latin word for ‘breath’ and ‘soul’”.

Charlotte calls herself and our species “human animals”, for – more important even than being a march – Humanisma is a path of humanity that takes into account the rights of the living and protects the most vulnerable beings, including animals. It invites us to include the animal in our humanism, to accept our share of animality, and to recognize that which sets us apart, she says.

Charlotte is using her professional background in communications to engage with the public along the way, through her social media channels as well as personal meetings and even webinars. Every now and then she has planned a longer stay in one town, packing it with encounters with local representatives from all walks of life (currently: Bordeaux from 6 through 25 December). But suggestions for local initiatives are always welcome, as are fellow walkers to join certain legs along the way.

To support Charlotte on her march and in her mission, follow her on social media, join her for part of the way, or contribute to her fundraiser. And better yet, rethink your attitude towards animals and share good practices within your own circle. As the famous writer and philosopher Milan Kundera once said, “Humanity’s true moral test, its fundamental test, consists of its attitude towards those who are at its mercy: animals. And in this respect humankind has suffered a fundamental debacle, a debacle so fundamental that all others stem from it.” 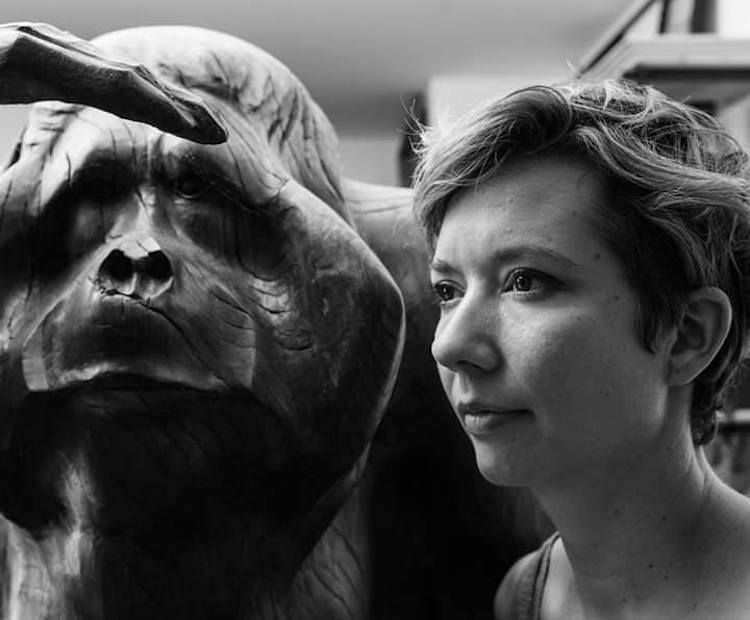