One of the biggest acting careers in history started the day an extra on a Cecil B. De Mille film set opined on proper directing.

Ask any Millenial today who Anthony Quinn was, and they – the generation raised on computer games and YouTube – will rattle off the titles of his movies as if they were today’s chart toppers. Viva Zapata, La Strada, Zorba, Lawrence of Arabia, The Guns of Navarone ….. all these and many more 20th century cult films and plays are inextricably linked to Anthony Quinn, who on April 21 would have celebrated his 100th birthday.

To stand out among the exceptional crop of remarkable and charismatic actors in the mid 20th century the way he did, is no small feat. But his ascent to world star status was a long and arduous road. Born in Chihuahua, Mexico, to a half-Mexican, half-Indian mother and a half-Mexican, half-Irish career soldier father, Anthony Rudolph Oaxaca Quinn’s family moved to El Paso, Texas when he was just 2 years old, and on to Southern California a few years later. Although growing up in a family devoted to fighting in the Mexican Revolution for rebel leader Pancho Villa, Tony had no military ambitions of his own but was rather interested in architecture, and especially Frank Lloyd Wright of whom he hoped “he’d want to adopt me. I just love the man.”

He started studying under the famous architect but his dreams of following in his teacher’s footsteps were cut short when he had to drop out of school to make money, taking on a motley assortment of jobs including fruit picker, musician, boxer, mattress-factory worker, taxi driver and apprentice preacher….. and actor, encouraged to do so by none other than Frank Lloyd Wright himself. In 1936 – at age 21 – Anthony’s parody of John Barrymore (Drew’s grandfather) in a stage play starring Mae West was so well done that it got him a gig as a film extra in a Harold Lloyd comedy at the whopping sum of $3.50-a-day, and soon another one in Cecil B. De Mille’s 1936 western The Plainsman, starring Gary Cooper.

Acting as a profession suited him just fine but he was soon disenchanted with Hollywood’s dark underbelly… chief among several factors that America wanted its heroes blond and blue-eyed, and dark-featured, built-like-a-bear Tony was relegated to playing the thug, the villain, and the boor. He therefore heeded the call to the stage, and quickly made a name for himself in New York. Among his most noteworthy sucesses on Broadway in the late 1940s, the role of Stanley Kowalksi in A Streetcar Named Desire. 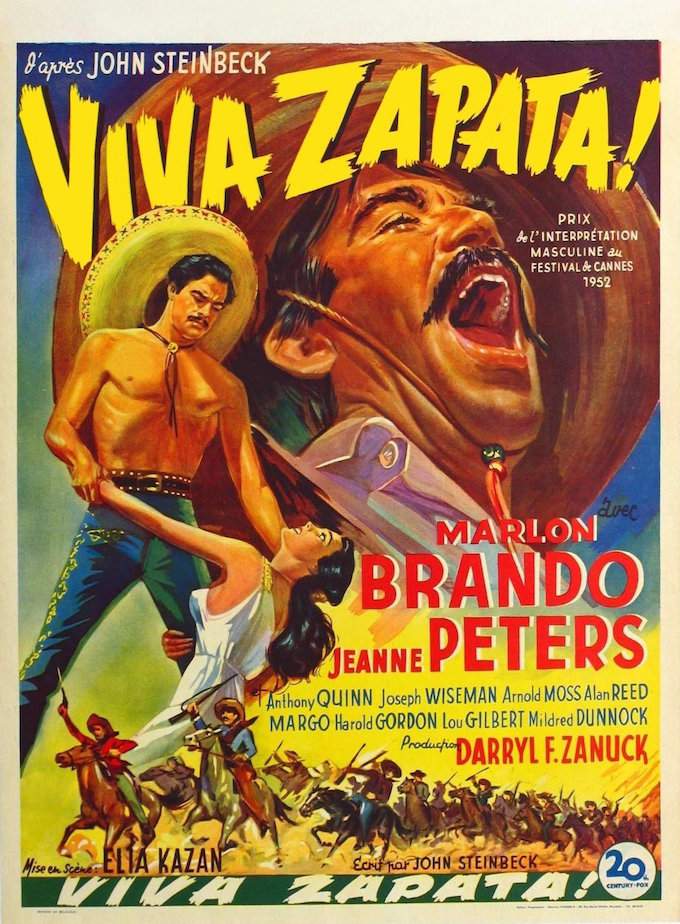 Then Hollywood called again, and in 1952 he did return, playing opposite Marlon Bando in Viva Zapata! His work earned him an Oscar for Best Supporting Actor, making him the first Mexican-American to receive an Academy Award. And from then on, the Who’s Who of Film Directing stood in line waiting for their turn to offer him roles that would write film history. 1954: maestro maestrissimo Federico Fellini made him the brutish Zampano in the legendary La Strada. 1956: Vincente Minnelli hired him as Paul Gauguin, playing opposite Kirk Douglas (as Vincent van Gogh) in Lust for Life, a role which would win him a second Best Supporting Actor Oscar. Quite an accomplishment considering that in this movie, Anthony had all but eight minutes on screen…. The same year, he was Quasimodo in The Hunchback of Notre Dame, alongside Gina Lollobrigida. In 1961, he starred in Richard Fleischer and Dino de Laurentiis’ Barrabas. In 1962, he appeared in David Lean’s epic Lawrence of Arabia….. And in 1964, he would forever eponymously associate his name with Alexis Zorbas’ movie Zorba the Greek.

Often called a “life force on celluloid”, his film and stage career went on and on, way into his 80s. Hardly an actor or actress of world renown that he did not play with. Hardly an award that he didn’t get nominated for year after year – Academy Awards, BAFTA, Golden Globe….. And when he played theater, he got standing ovations every single night, all while displaying a work ethic beyond reproach. “Sixteen hundred shows, and the poor stand-in never got to perform, even when my father had a fever of 102,” his son Lorenzo says.

Meanwhile, during all these years, the Mighty Quinn’s personal life was no less tumultuous, with three marriages, a flurry of romantic relationships, and a posse of 13 children by five different mothers. He was 24 when his first offspring was born in 1939, and 81 when the last one arrived, 57 years later….

And amazingly, Tony still found the time to indulge in his other artistic interests, going back to those days when he was interested in Frank Lloyd Wright’s architecture. An autodidact, and passionate about modern art, he constantly sketched while on set, and later also took up abstract sculpting. His creations were originally rooted in his multicultural origins and upbringing – merging Central American, North American, European, and Indian influences – and later became increasingly inspired by the film or the cultural setting he was working in. Today, his work is displayed in public and private exhibits all over the world. He also became a renowned collector and curator. Poet and novelist Jay Parini published a collection of photographs and essays documenting Anthony Quinn’s remarkable life in art, “in which one encounters the world of one of the most interesting men of our time.”

Tony was also a humanitarian, in big ways and in small. He was a pacifist who found creative strategies to get out of military duty during World War II. He forever fought against typceasting of every kind, from nationalism to physical appearance. And he was a regular blood donor to the man to whom he indirectly owned his first stage appearance… John Barrymore.

It seemed that nothing could stop this force of nature that Anthony Quinn was…. Nothing but the throat cancer to which he lost his life on June 3, 2001 at the age of 86. 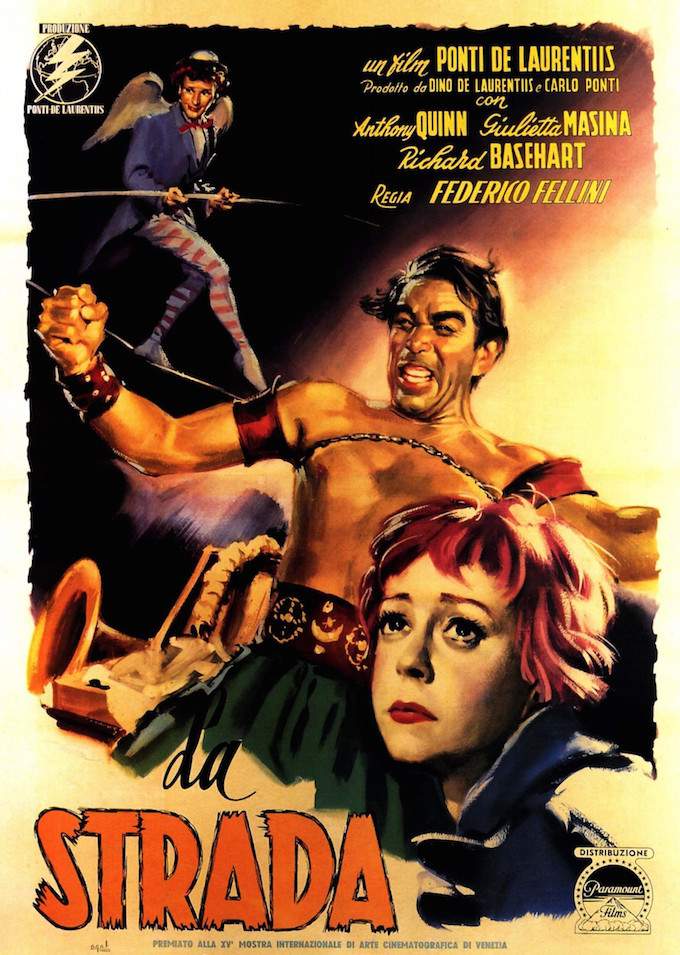 Interestingly, this giant of a man also has a connection to Nice, indirectly, in the person of local-born actor Marc Duret, himself an international heavyweight of acting. Marc, who was just cutting his teeth as a young actor in the United States, and the acting legend, 42 years his senior, struck up a friendship and to this day, Anthony Quinn is one of Marc’s role models…. and quite literally, actually. In Gelsomina, the theatrical adaptation of Fellini’s La Strada in 2014, Marc slipped in the role of Zampano, 60 years after his great colleague had first interpreted the itinerant circus artist on screen. Quite a challenge, considering there were not only the critical eyes of ardent Fellini lovers on him, but he also had to meet the benchmark of Tony’s strong and memorable performance. Needless to say that the Mighty Quinn would have been proud of what his erstwhile friend and student had made of the role.

We asked Marc Duret to share a favorite anecdote about his great colleague. “I had the privilege to spend some time with him, and I learned a lot from him – such fond memories! There is one situation though, going back to the early beginnings of Tony’s own film career, which to me is most representative for who he was and why he succeeded: he was a natural artist with an excellent eye for effect, and he was true to himself – so much so that he would stand up to authority without flinching whoever that was: When he was an extra on The Plainsman, with Gary Cooper playing the lead role, he had a very clear idea how a particular scene should be shot and was not shy to say so. Gary Cooper overheard him and stepped up, telling Cecil B. De Mille, “The boy is right!” That made the venerable but ever-grumpy director prick his ears and he give it a try, and sure enough, the scene worked to perfection. Years later, de Mille referred to Anthony Quinn’s unsolicited advice as ‘one of the most auspicious beginnings for an actor I’ve ever seen.’ ” As a bonus, Anthony also fell in love with Cecil B. De Mille’s daughter Katherine with whom he would have five children over their ensuing 28 year marriage.

In “One Man Tango” (1997), the second of Anthony Quinn’s two autobiographies, this legendary actor reminisces about finding himself among marvelous teachers, great artists and brilliant writers thoughout his life. “I have often thought there must be a fine magnet inside me,” he wrote, “because this is the only way I know to explain the kindness and friendship of so many luminous souls.” He certainly counted among those luminous souls himself.

Happy 100th birthday, Sir, and may you live as large in Heaven as you did down here. We’re pretty sure the first thing you did when you got there was to tell St. Pete how to properly run his shop just like you told Cecil B. De Mille back in 1936 how to do movies right…. and see what happened….?