350 years after the arrest of one of the most mysterious prisoners in history, there were still more legends than facts. Until now…

His fate has inspired writers and film makers, sent historians on a treasure hunt for the truth, and had scholars passionately dispute various theories. But so far the enigma around Sieur Eustache Dauger, believed to have been the Man in the Iron Mask, has remained largely intact. A new exhibition titled “L’Homme au masque de fer: Un secret d’État” at Cannes’ Musée de la Mer on Île Sainte-Marguerite, the very place he had been incarcerated in secrecy from 1687 to 1698 on the orders of King Louis XIV, has a closer look at the mysterious prisoner and the reality behind the legend.

Designed to appeal to history buffs as much as to the uninitiated, the large-scale show seeks to lift the veil on one of the most intriguing chapters in French history. Some 90 historic artifacts, documents, books, paintings, maps, and objects trace the three and a half centuries from Iron Mask’s confinement through today’s understanding.

Based on historical sources, the prisoner’s 34 year ordeal is tracked from his first place of detention – the keep of Pignerol in Italian Piedmont – to the Paris cemetery where he is buried. The exhibit also examines the conditions of his confinement, the appearance and meaning of his mask – iron as its description indicates, or historically more likely, made from black cloth – and the disturbing testimonies of those few who knew or saw him. And it explores the enigma’s mythical dimension through topical artifacts from literature, graphic arts and cinema. Finally, it offers visitors an insight into the daily life of the Royal Fort of Sainte-Marguerite during the reign of Louis XIV.

In order to understand the tragic fate of the Iron Mask, French photographer Alain Ceccaroli has reconstructed the captive’s itinerary from dungeon to dungeon, across France and northern Italy. This unpublished work, titled “Désespoir et rêves de l’Oublié” (Despair and Dreams of the Forgotten), juxtaposes past and present through visual impressions, evoking substantial deprivation, boredom and expectations of a prisoner condemned to oblivion. 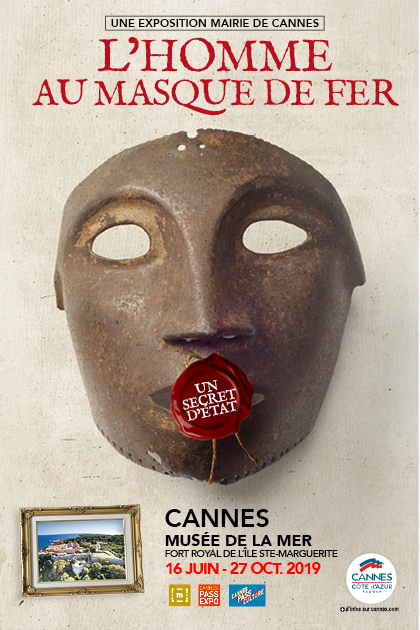 There is no shortage of speculation surrounding the identity of the famous captive but little is known so far. Like many of his contemporaries, French writer and philosopher Voltaire defended the theory that the man was the older, illegitimate brother of Louis XIV, born out of wedlock to Louis XIII’s wife Queen Anne of Austria and Cardinal Mazarin. Others believe he was the king’s twin brother who had to be put aside so that he would not make a claim to the throne.

But current research suggests his name was Eustache Dauger, a commoner born in 1637 and involved in several political scandals of his time. He was arrested in 1669 and subsequently held in a number of French prisons, including the Bastille and the Fortress of Pignerol (modern Pinerolo, Italy). He was held in the custody of the same jailer, Bénigne Dauvergne de Saint-Mars, for 34 years. When Dauvergne became governor of the Lérins Islands in the Gulf of Cannes in 1687, he brought the illustrious prisoner with him.

Even though a plaque on the 12th century tower in the Suquet quarter of Cannes claims that Dauger had escaped and hidden in this building, which still bears a copy of his mask, there is no concrete evidence this actually happened. Instead, the convict returned to the Bastille once again when his jailer was transferred to the capital in 1698. He died there on November 19, 1703 and was buried under the name “Marchioly” in the Parisian parish cemetery of Saint-Paul the very next day.

“But yonder in that donjon keep confined behind grim bolts and bars
deprived of the fresh breeze and the warm sunlight
envying the poorest hut its smoke
a prisoner languishes whom prison walls will kill
whose name is known to none
whose face no one has seen
a living mystery, a ghost a riddle with no glance for others
no sunshine for himself.
A sad and hopeless prisoner
O height of woe who weeps and cannot even wipe away his tears”

Over the three centuries since his death, the elusive identity of the Man in the Iron Mask has intrigued playwrights like Voltaire, Dumas and de Vigny, and inspired countless movies, starring A-listers like Douglas Fairbanks, Jean Marais, Richard Chamberlain or Leonardo di Caprio. His life story also serves as an educational project for Cannes’ youth who are invited to recreate contemporaneous mask and tools.