It’s quite early in the season, and the Théâtre de la Cité in Nice is already pulling a first ace from its sleeve.

French-Italian actor Cesare Capitani is a true Renaissance man: cultured, open-minded, forward-thinking, interested in a wide variety of fields from the arts to science, and knowledgeable in more than just a few of them. Renaissance men (and women) are named after the quantum leap period in the 16th century which connected the dark Middle Ages with the era of enlightenment and progress. The worldly and cultivated Medici clan in Florence encouraged education and exploration, and one of the most influential figures born during those times was Galileo Galilei.

And one day a while ago, our 21st century Renaissance man Cesare came across his fellow countryman Galileo’s writings. Not only the ones everyone has read or heard about, written toward the end of the formidable scientist’s life, subtly laced with frustration about a conservative clergy that would not listen to reason but insisted on its narrow conservative way of thinking. The letters Cesare dug up were those written 20 years earlier, when Galileo was a young, optimistic, curious man, full of hope that his findings could make a difference, especially with eminent thinkers and researchers like René Descartes, Johannes Kepler, or Tycho Brahe as his contemporaries. The letters reveal a passionate, proud man … initially full of aspirations and optimism, then later beset by doubts and fears…. a man who could reconcile his scientific education with his belief in God. Above all though, they reveal a man who throughout it all retained a great sense of humour.

And that unknown side of Galileo… The Other Galileo… is who Cesare will introduce us to in his one man show L’Autre Galilée which will pre-première at the Théâtre de la Cité in Nice on October 9.

Despite what one might think, this lighthearted monologue, told from the title hero’s perspective, is not a scientific treatise but the discovery of the human and funny side of one of history’s greatest scientists ever. We meet Galileo as a stargazing boy, then again as the precocious 16 year old heading off to university. Just a few years later, on the brink of a promising career as a physicist, he suddenly finds himself as the head of his family struggling to provide for them. As he matures, Galileo becomes increasingly philosophical, but also finds himself more and more at odds with the church and political powers – his thoughts are far too advanced, even radical, for the times he lives in, and he faces the moral dilemma whether or not to keep insisting on them with all the dire consequences they entail or rather be quiet and left in peace.

A theme which certainly strikes home, eerily reminiscent of our own times. Advances have been made in society, science, and technology – but religion, money, and politics still hold all the power, and conservative forces continue to oppose progress and liberal thought just like they have done throughout all of humanity.

Cesare’s creation, directed by Thierry Surace, is largely based on his protagonist’s letters. “When translating them into French, I discovered a brilliant philosopher, a pioneer, a staunch defender of the freedom of thought. Galileo was born in 1564. It is shocking that today, over 450 years later, the struggle for free thought is still a burning issue,” Cesare says. 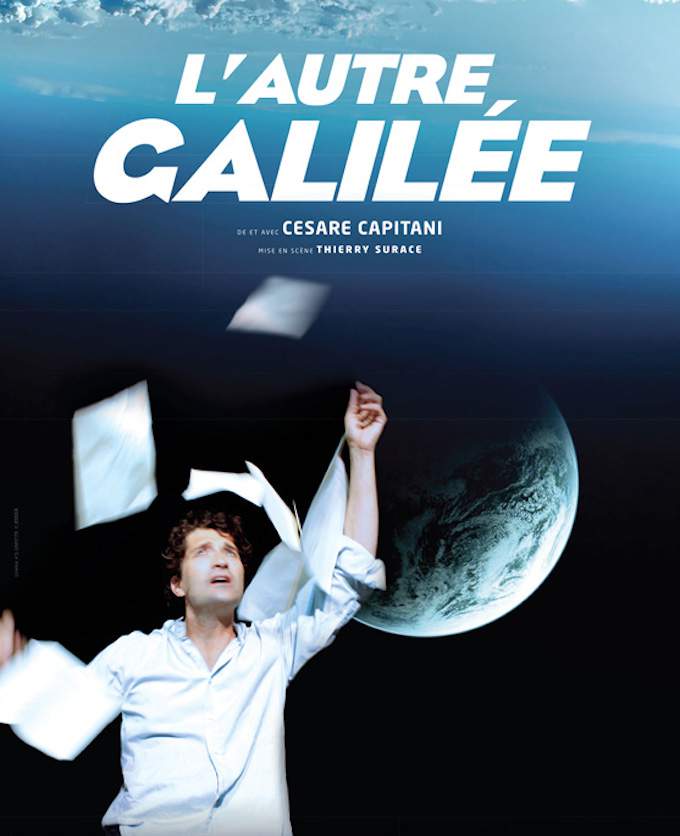 Like Galileo, Cesare himself is Italian. Maybe that’s where an affinity comes from?

The Milan native is a full-blood actor, writer and director with a leaning toward intellectual depth, whose themes often skirt historic personalities or events. He had grown up knowing deep in his heart he wanted to become an actor, and despite his family’s hopes for a more down-to-earth career pursued his ambitions. With a degree from Giorgio Strehler’s prestigious Piccolo Teatro acting academy in his pocket, he shows his versatility in productions as different as the theatrical adaptation of Anthony Burgess’ novel Clockwork Orange to Shakespeare’s Romeo and Juliet and Filippo Crivelli’s musical comedy Gigi. He also starts writing his own plays and instantly wins an award for Rhapsodie.

But he has a taste for more substantial fare, and discovers that Paris, with its endless cultural offerings from theatres to cinemas, museums to readings, concerts to happenings, hits the spot. And that’s where he makes his home in 1998.

Paris becomes a place of personal and professional rebirth…. renaissance… for Cesare. He continues his drama training at the Studio Pygmalion which has seen its fair share of high profile actors inside its walls…. Anne Parillaud prepared for her role in Besson’s cult movie Nikita (co-starring Marc Duret) there, Marion Cotillard worked with the studio for her Oscar-winning role as Piaf, and so did Sophie Marceau and many other internationally known French actors for their parts in major productions.

Soon, Cesare starts working on complex plays like Heinrich von Kleist’s tragedy Penthesilea. He adapts Umberto Eco’s Name of the Rose for theatre. He writes L’Aigle de Canossa…. He is not only in demand on stage but also on TV and in the movies: being tapped to play under directors of the caliber of Giorgio Strehler, Walter Manfrè, Dominique Farrugia, Laurent Raymond-Vinas, Mimmo Calopresti, and Jacques Rivette is a seal of approval to be proud of. And apart from great acting talent and handsome Latin looks, he has another rare and precious asset to offer: he works effortlessly in the three languages he is perfectly fluent in – Italian, French, and English.

Time races by, and soon we get to yet another turning point in Cesare’s life. He writes Moi, Caravage, a creation for the Avignon Off Festival 2010 in commemoration of the 400th death anniversary of Michelangelo Merisi, aka Caravaggio, the famous Milan painter – and incidentally Galileo’s contemporary. This biopic about Caravaggio’s wildly tumultuous life – portrayed by Cesare in the male lead opposite Laetitia Favart – becomes an instant success and tours in France and internationally for several years. “It was a real joy to do this play. It helped me to become more self-assured of what I could do. And it was also interesting from a linguistic perspective, at the crossroads of French and Italian,” Cesare, the language aficionado, shares with us.

Do we detect a theme of great 16th century personalities here… Caravaggio, Galileo….? “No, not really. I came across Galileo coincidentally and was fascinated by who he was in his younger years – his character, his vision, and his philosophy.”

It may not turn into a series of Renaissance visionaries then, but Cesare’s work often does revolve around humanizing a personality with an edge, be it Caravaggio’s youthful volatile temper or Galileo’s late-age grouchiness, and showing them from a different side. Even if the plays are light in tone, surely it must be intense for an actor to step into the footsteps of such strong characters, so how does Cesare shake off that skin? “I enjoy city life with all its cultural offering, that alone is already a great distraction from work. But from time to time, I really need to cut off from everything for a while. I love going back home to the Apennine village where my family originally comes from. It’s important for me to reconnect with nature, it nourishes me and gives me strength.”

And he needs physical and mental strength, working as prolifically as he does. For the past few years, and as also seen in L’Autre Galilée, Cesare has developed a liking for a discipline which among actors is often considered the hardest one: a one-man play – not standup comedy but a real play. Another one of his stage solo creations is Medinitali, in which he taps into his own experience as an Italian living in France – a humorous, close-up look at the differences and similarities, preconceived notions and clichés about the other country, social norms of two peoples so close and yet worlds apart.

A regular on Parisian stages and elsewhere, Cesare Capitani is all too rarely seen in Nice, so do not miss out on his one and only local performance of L’Autre Galilée (October 9 at Théâtre de la Cité) – the pre-première in fact before the two Renaissance men head to Paris for a six week run from October 14 to November 28 at Théâtre Lucerne.

The play is in French but even if language seems a barrier, it is not really. Galileo’s work has an impact on all of us every day, and his battle for the freedom of thought and against oppression by the Powers That Be is a universal and timeless theme… yesterday, today, and likely long into the future. And that’s the beautifully told message that Cesare Capitani delivers us through the great scientist’s writings.