Niçois artist Patrick Moya masters a rare skill: he knows how to juggle several lives in different places at the same time.

When you step into the home-cum-atelier of Patrick Moya, fasten your seatbelt and hold tight: you are about to be whisked off on a whirlwind journey through time and space, artistic disciplines, and parallel lives.

Patrick Moya is a very well-known, highly respected artist in France and beyond. But if you ask people what he does everyone has a different definition. He is a painter! No, he is a sculptor! A cartoonist! An online gallerist…. The truth is, he is all of that, and more. He creates art, he lives art, he breathes art, he thinks art, in more ways than anyone could ever imagine.

It started early on when young Patrick showed a knack for drawing cartoons, and he carried his interest right over into his art studies at Villa Arson, following in the footsteps of artists belonging to the famous École de Nice. As a job on the side, he posed as a nude model for arts students for 10 years.

At some point during that time he had an epiphany. “The artist becomes a part of his œuvre” – meaning, as an artist, you have to enter inside your work, looking out onto the world. Not really a new concept though, according to Patrick, but in fact a time-honoured one if you think for example of Leonardo da Vinci supposedly incorporating himself in his Mona Lisa.

From that moment on, Patrick started to create his art “from the inside out”. His “petit Moya”, the bald, bespectacled cartoon character with a not too subtle resemblance to himself that should become his trademark is none other than Patrick himself looking on the onlooker. And the frequent use of the letters M O Y A in a wide variety of configurations – a finely ironic, self-deprecating bow to his egocentric side – represents again the artist integrated into his work, leaning out from the “window” of his canvas watching the viewer. 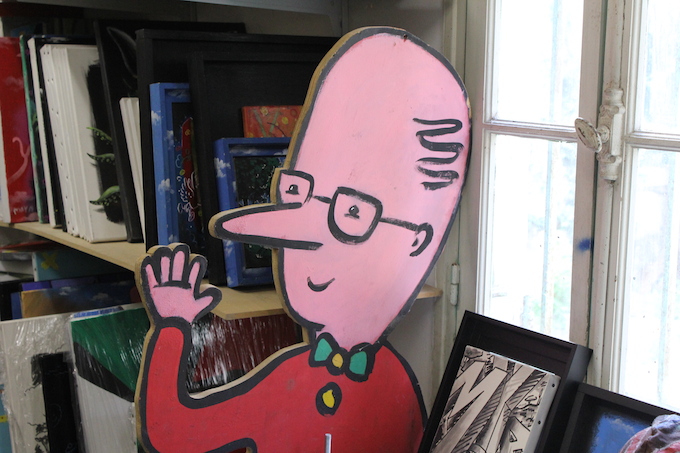 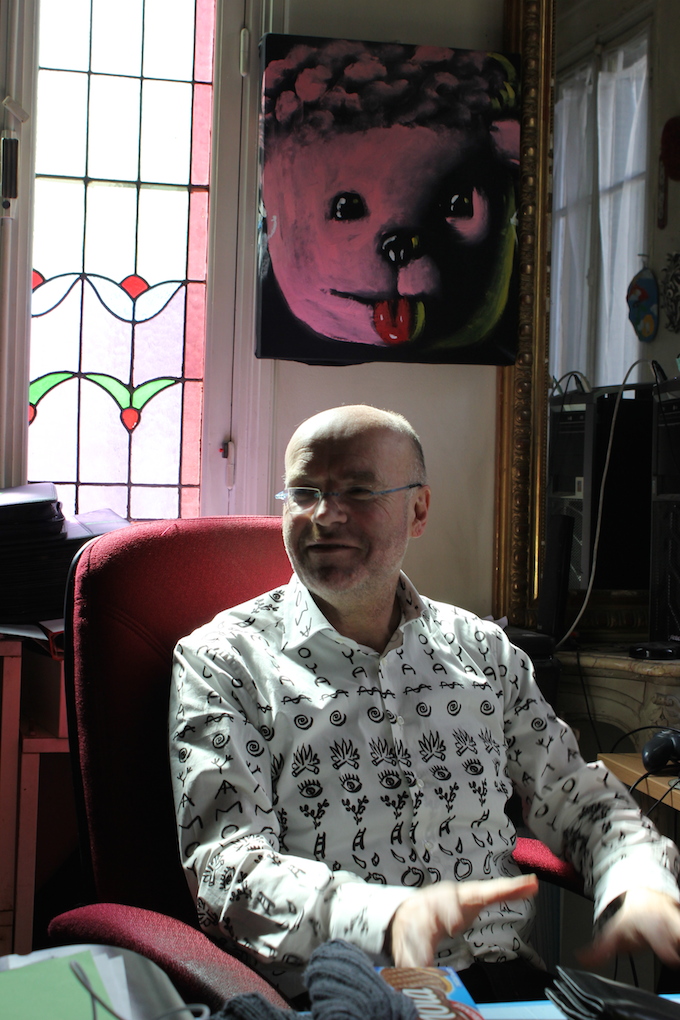 Thirty years have gone by since, witnessing the creation of over 4,500 works by this uniquely prolific artist. And those are only the catalogued ones, there are actually even more. His work has been on display around the world. Patrick deliberately invades every discipline in the plastic arts space but never seeks to disrupt – his paintings and sculptures always have a gentle, pleasant, and playful appeal.

And he delivers himself to abundance. Void space, in his art as well as in his environment, is a horror for him. That is why there is always a lot going on in his paintings. They invite you to stay a while and absorb them bit by bit… discover the humour, the double-entendres, and the surprise in them.

He loves to mix styles, materials, techniques, topics…and realities. Not content with only the Here and Now, and working in his atelier, he has also built a presence on Second Life, a virtual reality platform, where he owns and runs Moya Islands, a cyber-“country” complete with airports, hotels, tourist centers, attractions, and shops – but most importantly, packed to the brim with art in virtual museums, galleries, and indoor and outdoor venues.

Here, you can stroll, explore, study, scrutinize, and experience the world of art and the world of Moya. Take a helicopter to cruise across time and space to visit Patrick’s œuvres even if in real life they are on display in South Korea or some other farflung locale. Immerse yourself in his designs for the Carnaval de Nice no matter where in the world you are. Or admire Patrick’s Chapelle Moya when you can’t make it to the actual one in Clans in the Alpes Maritimes…

But beyond that, he also takes his Second Life reality into actual reality when he incorporates it in an exhibit, or even a church service, like the 2013 Artists’ Christmas Mass in Nice held by Father Yves-Marie Lequin. Again, the theme of who is looking at whom – is art imitating life, or life imitating art? 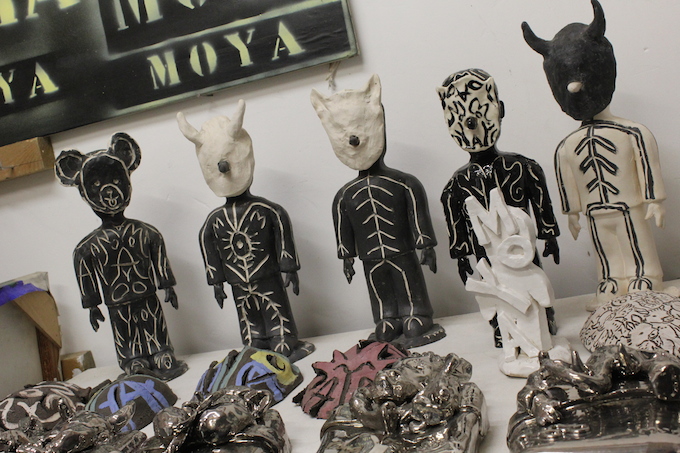 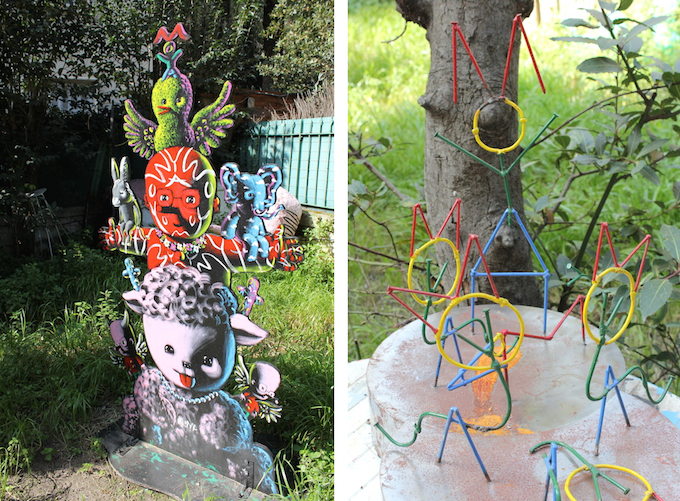 Lest one thinks Patrick is a dreamer – far from it. In front of his computer, playing tour guide to the visitors of Les Îles Moya via his winged avatar, he seems to temporarily step back into an excitable young boy version of himself. But he is firmly planted in the present moment. He knows that at the end of the day, plastic art is a tough business to be in. That is why he never neglects to engage with the real world, exhibiting around the globe, doing commission work for patrons and art lovers, and forever seeking to shape the contemporary artistic scene.

Calling Nice his home town for over 40 years, Patrick also feels firmly attached to his city and contributes to the development of the local arts scene. His works can be seen in galleries, exhibitions and even a church. One of his œuvres featuring a crucifix is on prominent display during the current exhibition of plastic arts at St. Pierre d’Arène in Nice. And during the recent Artists’ Mass at this very church on Ash Wednesday, Patrick Moya was there, and so was Little Moya, the cartoon character, projected right into the cupola, doing what he loves best – looking on.

Much as Patrick loves painting and sculpting in real life, digital art is his true passion. Is this where he sees the future of art going? “Design, like fashion or architecture, is now an art form that has made it into museums, and contemporary art has to keep developing if it wants to continue to exist,” so his conviction. 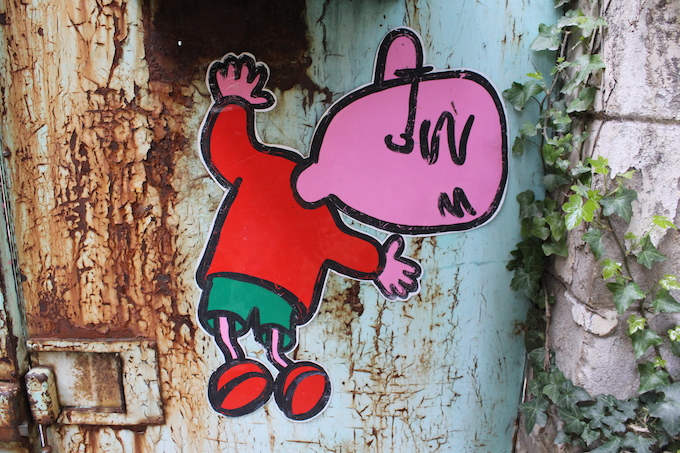 In today’s competitive and fast-paced world it is not easy to make a name for yourself. How can young artists still succeed? “If you want to do something, don’t wait, just do it, even if it is an error but you can always move on from there,” he says. He certainly took his own advice. He just does, unapologetically, what he wants to do and when he wants to do it, which has led him to be one of the most recognized, creative, and prolific contemporary artists in France.

Are you ready for a trip Patrick Moya’s universe? Hop on board and be surprised – very surprised!